The increasing needs of clustering massive datasets and the high cost of running clustering algorithms poses difficult problems for users. In this context it is important to determine if a data set is clusterable, that is, it may be partitioned efficiently into well-differentiated groups containing similar objects. We approach data clusterability from an ultrametric-based perspective. A novel approach to determine the ultrametricity of a dataset is proposed via a special type of matrix product, which allows us to evaluate the clusterability of the dataset. Furthermore, we show that by applying our technique to a dissimilarity space will generate the sub-dominant ultrametric of the dissimilarity. 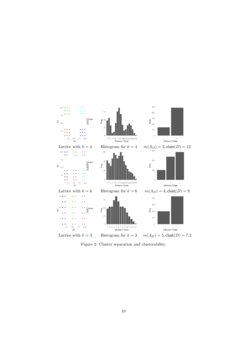 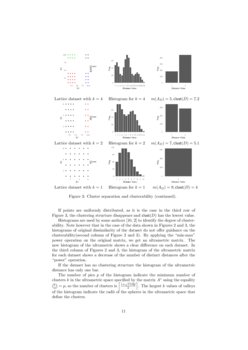 Clustering is the prototypical unsupervised learning activity which consists in identifying cohesive and well-differentiated groups of records in data. A data set is clusterable if such groups exist; however, due to the variety in data distributions and the inadequate formalization of certain basic notions of clustering, determining data clusterability before applying specific clustering algorithms is a difficult task.

Evaluating data clusterability before the application of clustering algorithms can be very helpful because clustering algorithms are expensive. However, many such evaluations are impractical because they are NP-hard, as shown in [4]. Other notions define data as clusterable when the minimum between-cluster separation is greater than the maximum intra-cluster distance [13], or when each element is closer to all elements in its cluster than to all other data [7].

Several approaches exist in assessing data clusterability. The main hypothesis of [1] is that clusterability can be inferred from an one-dimensional view of pairwise distances between objects. Namely, clusterability is linked to the multimodality of the histogram of inter-object dissimilarities. The basic assumption is that “the presence of multiple modes in the set of pairwise dissimilarities indicates that the original data is clusterable.” Multimodality is evaluated using the Dip and Silverman statistical multimodality tests, an approach that is computationally efficient.

Alternative approaches to data clusterability are linked to the feasibility of producing a clustering; a corollary of this assumption is that “data that are hard to cluster do not have a meaningful clustering structure” [12]

. Other approaches to clusterability are identified based on clustering quality measures, and on loss function optimization

We propose a novel approach that relates data clusterability to the extent to which the dissimilarity defined on the data set relate to a special ultrametric defined on the set.

The paper is structured as follows. In Section 2 we introduce dissimilarities and an ultrametrics that play a central role in our definition of clusterability. A special matrix product on matrices with non-negative elements that allow an efficient computation of the subdominant ultrametric is introduced. In Section 3 a measure of clusterability that is based on the iterative properties of the dissimilarity matrix is defined. We provide experimental evidence on the effectiveness of the proposed measure through several experiments on small artificial data sets in Section 4. Finally, we present our conclusions and future plans in Section 5.

A dissimilarity on a set S is a mapping d:S×S⟶\bbd R such that

A dissimilarity on S that satisfies the triangular inequality

for every x,y,z∈S is a metric. If, instead, the stronger inequality

When (S,d) is an ultrametric space two spheres having the same radius r in (S,d) are either disjoint or coincide [18]. Therefore, the collection of closed spheres of radius r in S, Cr={B[x,r]∣r∈S} is a partition of S; we refer to this partition as an r-spheric clustering of (S,d).

It is interesting to note that every r-spheric clustering in an ultrametric space is a perfect clustering [5]. This means that all of its in-cluster distances are smaller than all of its between-cluster distances. Indeed, if x,y belong to the same cluster B[u,r] then d(x,y)⩽r. If x∈B[u,r] and y∈B[v,r], where B[u,r]∩B[v,r]=∅, then d(v,x)>r, d(y,v)⩽r and this implies d(x,y)=d(x,v)>r because the triangle (x,y,v) is isosceles and d(y,v) is not the longest side of this triangle.

The closed spheres of this spaces are:

Based on the properties of spheric clusterings mentioned above meaningful such clusterings can be produced in linear time in the number of objects. For the ultrametric space mentioned in Example 2.1, the closed spheres of radius 6 produce the clustering

Let S be a set. Define a partial order “⩽” on the set of definite dissimilarities DS by d⩽d′ if d(x,y)⩽d′(x,y) for every x,y∈S. It is easy to verify that (DS,⩽) is a poset.

The set US of ultrametrics on S is a subset of DS.

is an ultrametric on S.

We need to verify only that d(x,y) satisfies the ultrametric inequality d(x,y)⩽max{d(x,z),d(z,y)} for x,y,z∈S. Since each mapping di is an ultrametric, for x,y,z∈S we have

hence d is an ultrametric on S. ∎

Let d be a dissimilarity on a set S and let Ud be the set of ultrametrics Ud={e∈US∣e⩽d}. The set Ud has a largest element in the poset (US,⩽).

The set Ud is nonempty because the zero dissimilarity d0 given by d0(x,y)=0 for every x,y∈S is an ultrametric and d0⩽d.

This is equivalent to

Thus, there exists ^e∈Ud such that

The ultrametric defined by Theorem 2.3 is known as the maximal subdominant ultrametric for the dissimilarity d.

Let ℙ be the set

The matrix multiplication defined above is associative, hence \bbd Pn×n is a semigroup with the identity En. The powers of A are inductively defined as

Let L(A) be the finite set of elements in ℙ that occur in the matrix A∈\bbd Pn×n. Since he entries of any power An of A are also included in L(A), the sequence A,A2,…,An,… is ultimately periodic because it contains a finite number of distinct matrices.

Let k(A) be the least integer k such that Ak=Ak+d for some d>0. The sequence of powers of A has the form

where d is the least integer such that Ak(A)=Ak(A)+d. This integer is denoted by d(A).

The set {Ak(A),…,Ak(A)+d−1} is a cyclic group with respect to the multiplication.

If (S,d) is a dissimilarity space, where S={x1,…,xn}, the matrix of this space is the matrix A∈\bbd Pn×n defined by aij=d(xi,xj) for 1⩽i,j⩽n. Clearly, A is a symmetric matrix and all its diagonal elements are 0, that is, A⩽En.

and Am is an ultrametric matrix.

Since A⩽En, the existence of the number m with the property mentioned in the theorem is immediate since there exists only a finite number of n×n matrices whose elements belong to L(A). Since Am=A2m, it follows that Am is an ultrametric matrix. ∎

For a matrix A∈\bbd Pn×n let m(A) be the least number m such that Am=Am+1. We refer to m(A) as the stabilization power of the matrix A. The matrix Am(A) is denoted by A∗.

Suppose that C∈\bbd Pn×n is an ultrametric matrix such that A⩽C, which implies Am⩽Cm⩽C. Thus, Am dominates any ultrametric that is dominated by d. Consequently, the dissimilarity defined by Am is the subdominant ultrametric for d. ∎

The subdominant ultrametric of a dissimilarity is usually studied in the framework of weighted graphs [14].

A weighted graph is a triple (V,E,w), where V is the set of vertices of G, E is a set of two-element subsets of V called edges. and w:E⟶\bbd P is the weight of the edges. If e∈E, then e={u,v}, where u,v are distinct vertices in V. The weight is extended to all 2-elements subsets of V as

For a weighted graph G=(V,E,w), the extension of the weight function w to Pathsn(G) is the function M:Paths(G)⟶\bbd P defined as

Let P(ℓ)ij be the set of paths of length ℓ that join the vertex vi to the vertex vj. Note that

Define a(ℓ)ij=min{M(℘)∣℘∈P(ℓ)ij}. The powers of the incidence matrix of the graph are given by

Our hypothesis is supported by previous results obtained in [1], where the clusterability of 9 databases were statistically examined using the Dip and Silverman tests of unimodality. The approach used in [1] starts with the hypothesis that the presence of multiple modes in the uni-dimensional set of pairwise distances indicates that the original data set is clusterable. Multimodality is assessed using the tests mentioned above. The time required by this evaluation is quadratic in the number of objects.

Another series of experiments involved a series of small datasets having the same number of points in \bbd R2 arranged in lattices. The points have integer coordinates and the distance between points is the Manhattan distance.

By shifting the data points to different locations, we create several distinct structured clusterings that consists of rectangular clusters.

Figures 2 and 3 show an example of a series of datasets with a total of 36 data points. Initially, the data set has 4 rectangular clusters containing 9 data points each with a gap of 3 distance units between the clusters. The ultrametricity of the dataset and, therefore, its clusterability is affected by the number of clusters, the size of the clusters, and the inter-cluster distances. Figure 3 shows that m(A) reaches its highest value and, therefore, the clusterability is the lowest, when there is only one cluster in the dataset (see the third row of Figure 3).

If points are uniformly distributed, as it is the case in the third row of Figure

3, the clustering structure disappears and clust(D) has the lowest value.

Histograms are used by some authors [10, 2] to identify the degree of clusterability. Note however that in the case of the data shown in Figures 2 and 3, the histograms of original dissimilarity of the dataset do not offer guidance on the clusterability(second column of Figure 2 and 3). By applying the “min-max” power operation on the original matrix, we get an ultrametric matrix. The new histogram of the ultrametric shows a clear difference on each dataset. In the third column of Figures 2 and 3, the histogram of the ultrametric matrix for each dataset shows a decrease of the number of distinct distances after the “power” operation.

If the dataset has no clustering structure the histogram of the ultrametric distance has only one bar.

If a data set contains a large number of small clusters, these clusters can be regarded as outliers and the clusterability of the data set is reduced. This is the case in the third line of Figure

4 which shows a particular case for 9 clusters with 36 data points. Since the size of each cluster is too small to be considered as a real cluster, all of them together are merely regarded as a one cluster dataset with 9 points.

The special matrix powers of the adjacency matrix of the weighted graph of object dissimilarities provide a tool for computing the subdominant ultrametric of a dissimilarity and an assessment of the existence of an underlying clustering structure in a dissimilarity space.

The “power” operation successfully eliminates the redundant information in the dissimilarity matrix of the dataset but maintains the useful information that can discriminate the cluster structures of the dataset.

In a series of seminal papers[15, 16, 17], F. Murtagh argued that as the dimensionality of a linear metric space increases, an equalization process of distances takes place and the metric of the space gets increasingly closer to an ultrametric. This raises the issues related to the comparative evaluation (statistical and algebraic) of the ultrametricity of such spaces and of their clusterability, which we intend to examine in the future.