Data and Science has stood out in the generation of results, whether in the projects of the scientific domain or business domain. CERN Project, Scientific Institutes, companies like Walmart, Google, Apple, among others, need data to present their results and make predictions in the competitive data world. Data and Science are words that together culminated in a globally recognized term called Data Science. Data Science is in its initial phase, possibly being part of formal sciences and also being presented as part of applied sciences, capable of generating value and supporting decision making. Data Science considers science and, consequently, the scientific method to promote decision making through data intelligence. In many cases, the application of the method (or part of it) is considered in Data Science projects in scientific domain (social sciences, bioinformatics, geospatial projects) or business domain (finance, logistic, retail), among others. In this sense, this article addresses the perspectives of Data Science as a multidisciplinary area, considering science and the scientific method, and its formal structure which integrate Statistics, Computer Science, and Business Science, also taking into account Artificial Intelligence, emphasizing Machine Learning, among others. The article also deals with the perspective of applied Data Science, since Data Science is used for generating value through scientific and business projects. Data Science persona is also discussed in the article, concerning the education of Data Science professionals and its corresponding profiles, since its projection changes the field of data in the world. 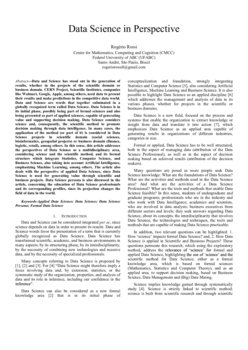 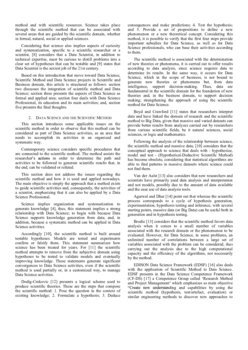 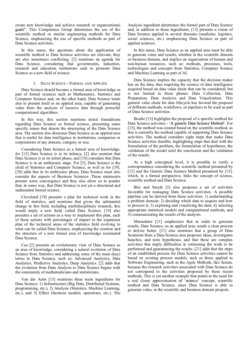 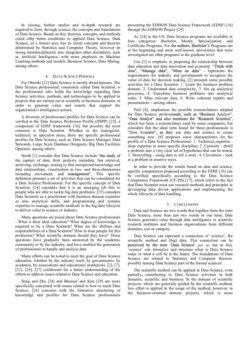 Data science has the potential to improve business in a variety of verti...
Hanan Shteingart, et al. ∙

Mapping for accessibility: A case study of ethics in data science for social good

This article sets out our perspective on how to begin the journey of dec...
Abeba Birhane, et al. ∙

Changes from Classical Statistics to Modern Statistics and Data Science

A coordinate system is a foundation for every quantitative science, engi...
Kai Zhang, et al. ∙