For electric vehicles (EV) and energy storage (ES) batteries, thermal runaway is a critical issue as it can lead to uncontrollable fires or even explosions. Thermal anomaly detection can identify problematic battery packs that may eventually undergo thermal runaway. However, there are common challenges like data unavailability, environment variations, and battery aging. We propose a data-driven method to detect battery thermal anomaly based on comparing shape-similarity between thermal measurements. Based on their shapes, the measurements are continuously being grouped into different clusters. Anomaly is detected by monitoring deviations within the clusters. Unlike model-based or other data-driven methods, the proposed method is robust to data loss and requires minimal reference data for different pack configurations. As the initial experimental results show, the method not only can be more accurate than the onboard BMS, but also can detect unforeseen anomalies at the early stage. 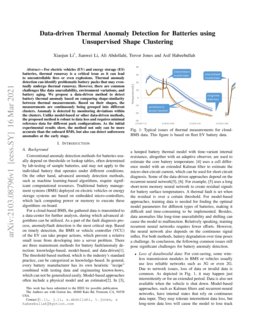 - This work has been submitted to IFAC for possible publication - Models...
Philipp Gesner, et al. ∙

In the monitoring of a complex electric grid, it is of paramount importa...
Sanjeev Raja, et al. ∙

Conventional anomaly detection methods for batteries usually depend on thresholds or lookup tables, often determined by lab-testing of sample batteries, and may not apply to the individual battery that operates under different conditions. On the other hand, advanced anomaly detection methods, such as machine learning-based algorithms, require significant computational resources. Traditional battery management systems (BMS) deployed on electric vehicles or energy storage systems are based on embedded micro-controllers, which lack computing power or memory to execute these algorithms on-board.

For a cloud-based BMS, the gathered data is transmitted to a data-center for further analysis, during which advanced algorithms can be utilized. As a part of the fault diagnosis process, anomaly/fault detection is the most critical step. Based on timely detection, the BMS or vehicle controller (VCU) of the EV can take proper actions, which prevent a relative small issue from developing into a server problem. There are three mainstream methods for battery fault/anomaly detection: knowledge-based, model-based, and data-driven[1]

. The threshold-based method, which is the industry’s standard practice, can be categorized as knowledge-based. In general, every battery manufacturer has its own heuristic ”recipe” combined with testing data and engineering known-hows, which can not be generalized easily. Model-based approaches often include a physical model and an estimator

[2]. In [3], a lumped battery thermal model with time-variant internal resistance, altogether with an adaptive observer, are used to estimate the core battery temperature. [4]

uses a cell difference model with an extended Kalman filter to estimate the micro-shot-circuit current, which can be used for short circuit diagnosis. Some of the data-driven approaches depend on the recurrent neural network

uses a long short-term memory neural network to create residual signals for battery surface temperatures. A thermal fault is set when the residual is over a certain threshold. For model-based approaches, training data is needed for finding the optimal model parameters for different types of batteries, making it difficult and time-consuming to be implemented. Besides, data anomalies like long-time unavailability and shifting can cause the model to malfunction. Relatively speaking, training recurrent neural networks requires fewer efforts. However, the neural network also depends on the continuous signal influx. For both methods, battery degradation over time poses a challenge. In conclusion, the following common issues still pose significant challenges for battery anomaly detection.

To address some of the challenges mentioned above, this paper proposes a data-driven, model-free approach that monitors the shape-similarities across the measurements to detect battery thermal anomalies. The proposed method does not require the data to be continuous, making it robust to data loss and invalid data. The same reason also alleviates the effects of battery aging or environment variations since cells are likely to deteriorate or be influenced by these variations as a whole. Asynchronous data issue is handled by the shape-based distance measurement, which is invariant to signal shifting. Furthermore, this method can be applied to different configurations easily since it needs very little reference data.

Clustering is an unsupervised learning algorithm that does not require training with labeled data. Therefore, this method can detect unforeseen anomalies. Unlike the existing cross-similarity approaches

, the proposed method does not need feature extraction. Also, comparing shapes(which is scaling-invariant) instead of values allows it to capture abnormality at the early stage. Therefore, this new method has the potential to give early warnings.

Proposed by[9], the K-shape clustering algorithm is intended to be used for time-series analysis. It adopts a cross-correlation sequence (CCω(x,y)) to determine signal similarity. The shape-based distance function is given as:

where →x,→y are the normalized time-series measurements, and R0 is the Rayleigh Quotient. The overall K-shape algorithm has two steps per iteration, repeated until convergence or max iteration is reached. In the first step (assignment), measurements are assigned to each cluster based on their similarity to the centroid. In the second step (update), the clusters’ centroids are updated. The overall time complexity O(max{(ncm)log(m),nm2,cm3}) scales linearly with the number of measurements(n) and the number of clusters (c) but increase noticeably with the number of time-steps (m). K-shape has been applied to time-series analysis and forecast[10, 11, 12], including battery cell voltage monitoring[13].

Similar to the advantages are given above, the proposed method relies on some assumptions and has its limitations.

As the flowchart depicted in Fig. 2 , the proposed anomaly detection method contains the following stages:

The R&D team at Gotion has built a cloud-based battery data platform. The data platform receives and cleans battery data from different sources such as fleet vehicles, onboard tests, and lab tests. Afterward, it is uploaded to a time-series database. There are also software modules for data-visualization, battery simulation, and analysis. Most of the algorithms are implemented in Python. The proposed method is applied to battery data collected from fleet vehicle batteries between 2019 and 2021. The data sampling rate is about 0.1 Hz. There are different types of battery chemistry (

In this section, the testing results of two different battery packs are presented and compared to the fault detection based on the on-board BMS. The proposed algorithm is implemented in Python and deployed on a cloud computing platform (AWS). For the following testing results, the segment size is set to 25, equivalent to 4.1 min. Notice that both cases have intermittent and longtime data losses. In the following figures, the data gaps are connected for better visualization.

In the first case, the proposed method is applied to a battery pack (LiFePO4) that undergoes an over-temperature anomaly. As depicted in Fig 2(a), on Oct 30th, the battery’s temperature near sensor #13 rises significantly to over 70 C. While both the proposed method and BMS are able to flag the anomaly, the new method is more than 90 min earlier. The detailed timing difference between the two methods is illustrated in Fig 2(b). As the figure shows, the BMS reports an over-temperature fault at 3:45 PM when the maximum temperature is over 55 C. On the other hand, the proposed method send an anomaly warning around 2:15 pm, just when sensor #13 start to depart from the rest of the measurements. Fig 2(c) shows a shape plot of the segment where the anomaly is detected. Clearly, one of the signal’s (#13) rising shape stands out from the rest. As signal #13 continues to grow, its shapes for the following segments become less steep. Therefore, the confident level (d[k]) is the largest at the beginning of the anomaly. This explains why the new method can send early warnings. In conclusion, case I validates that the proposed method can send an early warning for battery over-temperature faults.

The second case is from an EV with a two-pack configuration, in which two battery packs (LiNiMnCo) are installed in different locations inside the vehicle. As a result, the thermal measurements behave very differently. As Fig 4 shows, the temperature difference between the two packs grows noticeably in 8:00-9:00 AM and in 1:00-2:00 PM, when a large current is discharged from the battery. In both cases, the onboard BMS reports thermal fault despite that there is no real anomaly. The reason is that the on-board BMS uses hard thresholds from a look-up table. Also depicted in Fig 4, the proposed method successfully recognizes two clustering groups, including {1,3,5,7} and {2,4,6,8} and does not report any anomaly since there is no discrepancy found with the cluster groups. This testing case shows that compared to BMS, the proposed method is more robust to variations caused by the pack design and sensor location.

In this paper, we identify common issues in the field of cloud-based battery anomaly/fault detection. Then, a method based on unsupervised shape-clustering is proposed for detecting battery thermal anomalies. The proposed method does not depend on a model or large training data. It also has several unique advantages, such as the resilience to data loss and the capability of early detection. Two test cases based on real vehicle data are studied. In one case, the new method is found to be more accurate than the BMS when applied to a multi-pack vehicle. In the other case study where a battery over-temperature fault occurs, the proposed method is capable of flagging the anomaly at the very early stage, more than 90 min ahead of the BMS.

Future works include the following. Firstly, this method is being currently tested on large data sets. The rate of false positives and false negatives needs to be investigated and compared to the BMS. Secondly, detection accuracy can be further improved by making use of another measurement signals like BMS status and cell voltages.