Social storage systems are becoming increasingly popular compared to the existing data backup systems like local, centralized and P2P systems. An endogenously built symmetric social storage model and its aspects like the utility of each agent, bilateral stability, contentment, and efficiency have been extensively discussed in Mane et. al. (2017). We include heterogeneity in this model by using the concept of Social Range Matrix from Kuznetsov et. al (2010). Now, each agent is concerned about its perceived utility, which is a linear combination of its utility as well as others utilities (depending upon whether the pair are friends, enemies or do not care about each other). We derive conditions when two agents may want to add or delete a link, and provide an algorithm that checks if a bilaterally stable network is possible or not. Finally, we take some special Social Range Matrices and prove that under certain conditions on network parameters, a bilaterally stable network is unique. 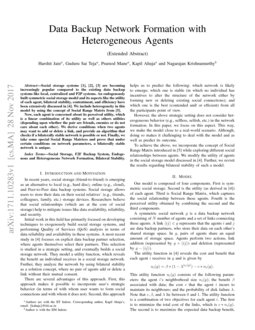 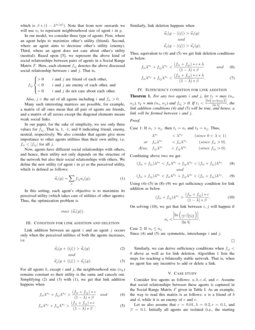 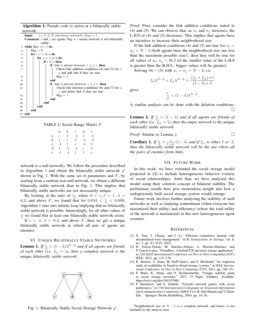 I Introduction and Motivation

Initial work in this field has primarily focused on developing techniques to exogenously build social storage systems, and performing Quality of Services (QoS) analysis in terms of data reliability and availability in these systems. A most recent study in [4] focuses on explicit data backup partner selection, where agents themselves select their partners. This selection is studied in a strategic setting, and eventually builds a social storage network. They model a utility function, which reveals the benefit an individual receives in a social storage network. Further, they analyze the network by using bilateral stability as a solution concept, where no pair of agents add or delete a link without their mutual consent.

There are several advantages of this approach. First, this approach makes it possible to incorporate user’s strategic behavior (in terms of with whom user wants to form social connections and with whom it does not). Second, this approach helps us to predict the following: which network is likely to emerge; which one is stable (in which no individual has incentives to alter the structure of the network either by forming new or deleting existing social connections); and which one is the best (contended and/ or efficient) from all the participants point of view.

However, the above strategic setting does not consider heterogeneous behavior (e.g., selfless, selfish, etc.) in the network formation. In this paper, we focus on this aspect. This way, we make the model close to a real-world scenario. Although, doing so makes it challenging to deal with the model and as well as predict its outcome.

To achieve the above, we incorporate the concept of Social Range Matrix introduced in [5] while exploring different social relationships between agents. We modify the utility of agents in the social storage model discussed in [4]. Further, we revisit the results regarding bilateral stability of such a model.

Our model is composed of four components. First is symmetric social storage. Second is the utility (as derived in [4]) of each agent. Third is Social Range Matrix, which captures the social relationship between these agents. Fourth is the perceived utility obtained by combining the second and the third components.

A symmetric social network g is a data backup network consisting of N number of agents and a set of links connecting these agents. A link ⟨ij⟩∈g represents that the agents i and j are data backup partners, who store their data on each other’s shared storage space. In g, pairs of agents share an equal amount of storage space. Agents perform two actions, link addition (represented by g+⟨ij⟩) and deletion (represented by g−⟨ij⟩).

This utility function ui(g) consists of the following parameters: the agent i’s neighborhood size ni(g); the benefit β associated with data; the cost c that the agent i

incurs to maintain its neighbours; and the probability of disk failure

λ. Note that c,β, and λ lie between 0 and 1. The utility function is a combination of two objectives for each agent i. The first is to minimize the total cost of the links, which is c∗ni(g). The second is to maximize the expected data backup benefit, which is β∗(1−λni(g)). Note that from now onwards we will use ni to represent neighbourhood size of agent i in g.

Also, j∈ the set of all agents including i and fii>0.

Many such interesting matrices are possible, for example, a matrix of all ones mean that all pair of agents are friends, and a matrix of all zeroes except the diagonal elements means weak social links.

In our paper, for the sake of simplicity, we use only three values for fij. That is, 1, -1, and 0 indicating friend, enemy, neutral, respectively. We also consider that agents give more importance to other agents utilities than their own utility, i.e. fii<|fij| for all j.

In this setting, each agent’s objective is to maximize its perceived utility (which takes care of utilities of other agents). Thus, the optimization problem is

Link addition between an agent i and an agent j occurs only when the perceived utilities of both the agents increases, i.e.

For all agents k, except i and j, the neighbourhood size (nk) remains constant so their utility is the same and cancels out. Simplifying (2) and (3) with (1), we get that link addition happens when

Thus, equivalent to (4) and (5) we get link deletion conditions as below.

Combining above two we get

On solving (10), we get that link between i, j will happen if

Similarly, we can derive sufficiency conditions when fij<0 above as well as for link deletion. Algorithm 1 lists the steps for reaching a bilaterally stable network. That is, when no agent has any incentive to add or delete a link.

Consider five agents as follows: a,b,c,d, and e. Assume that social relationships between these agents is captured in the Social Range Matrix F given in Table I. As an example, the way to read this matrix is as follows: a is a friend of b and d, while it is an enemy of c and e.

If c>β, λ=0.2, and above F, then we get a unique bilaterally stable network in which all pair of agents are enemies.

If cβ<(1−λ)λN−2 and if all agents are friends of each other (i.e. fij=1), then a complete network is the unique bilaterally stable network.

First, consider the link addition conditions stated in (4) and (5). We can observe that, as ni and nj increases, the L.H.S of (4) and (5) decreases. This implies that agents have an incentive to increase their neighborhood size.

If the link addition conditions (4) and (5) are true for ni=nj=N−2 (both agents have the neighborhood size one less than the maximum possible size)111Neighborhood size of N−1 is a complete network, and hence, is not included in the analysis here., then they will be true for all values of ni, nj< N-2 (if the smaller value of the L.H.S is greater than the R.H.S., bigger values will be greater).

A similar analysis can be done with the deletion conditions. ∎

If cβ>(1−λ) and if all agents are friends of each other (i.e. fij=1), then the empty network is the unique bilaterally stable network.

If cβ>11−fii(1−λ) and if fij is either 1 or -1, then the bilaterally stable network will be the one where all the pairs of enemies form links.

In this work, we have extended the social storage model proposed in [4] to include heterogeneous behavior (variety of social relationships). After that, we have analyzed this model using their solution concept of bilateral stability. The preliminary results here give tremendous insight into how a endogenously built social storage system would emerge.

Future work involves further analyzing the stability of such networks as well as studying contentment (when everyone has maximized their utility) and efficiency (where the total utility of the network is maximized) in this new heterogeneous agent scenario.