Data augmentation is commonly used for generating additional data from the available training data to achieve a robust estimation of the parameters of complex models like the one for speaker verification (SV), especially for under-resourced applications. SV involves training speaker-independent (SI) models and speaker-dependent models where speakers are represented by models derived from an SI model using the training data for the particular speaker during the enrollment phase. While data augmentation for training SI models is well studied, data augmentation for speaker enrollment is rarely explored. In this paper, we propose the use of data augmentation methods for generating extra data to empower speaker enrollment. Each data augmentation method generates a new data set. Two strategies of using the data sets are explored: the first one is to training separate systems and fuses them at the score level and the other is to conduct multi-conditional training. Furthermore, we study the effect of data augmentation under noisy conditions. Experiments are performed on RedDots challenge 2016 database, and the results validate the effectiveness of the proposed methods. 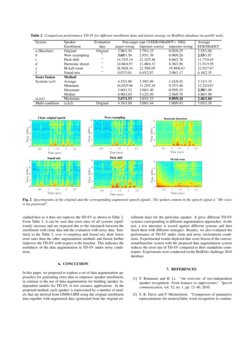 The task of verbalization of RDF triples has known a growth in popularit...
Sebastien Montella, et al. ∙

In this paper, we focus on improving the performance of the text-depende...
Xiaoyi Qin, et al. ∙

is defined as the task of verifying a person using their voice signal. It is a binary classification problem, where an SV system takes decision by either accepting or rejecting a person claiming the identity using his/her voice. As in most of machine learning methods, constructing an SV system consists of training and test phases. In the training/enrollment phase, speakers are characterized by their models/vectorized representation using his/her speech samples during training. In test, a speaker requests to grant the access of a system by claiming his/her identity with a voice sample. The delivered (test) speech sample is then scored against the claimant specific speaker representation in the system. Finally, the score is used for decision making whether the claimant will be accepted or rejected.

There are many techniques available in the literature for the improvement of TD-SV systems using short utterances. Those techniques can be divided into different domains. For example, feature-domain approaches include Mel-frequency cepstral coefficients (MFCC) [2], perceptual linear prediction (PLP) [3]

In low resource applications, it is difficult to get a large amount of diverse data for training a large number of parameters in speaker independent model like GMM-UBM, DNNs, i-vector and x-vector. To create the diverse version of available training data, many augmentation techniques have been introduced in literature. Augmentation basically generates additional data from existing data with sort of transformations, for example, vocal tract length perturbation [8], mixing noise or other speech files with the given raw speech signal [9, 10], applying impulse (IR) response (of hall room, class room) on the given raw speech signal [11], quadratic distortion on raw audio signal (harmonic distortion) [12], wow re-sampling [12], pitch shifting [13], SpecAugment (deformation of log mel spectrogram with frequency masking) [14] and random image warping [15] on image. The effectiveness of data augmentation has been proven in various studies including speech recognition [14], speaker recognition [7] and image processing [16].

In speaker verification, augmented data, e.g. noisy version of available training data, are conventionally used to build speaker-independent (SI) modeling, e.g. GMM-UBM [17, 18], DNNs [7], total variability space in i-vector [7], and in post-processing/scoring step e.g. probabilistic linear discriminate analysis (PLDA) [7, 19]. In [20, 17], the noisy version of training speech utterances/speaker enrollment data has been included in the enrollment phase for building a noise-robust model for spoofing detection [20] and speaker recognition [17] under noisy environments, respectively. However, as per our best knowledge, there is no study in the literature to use augmented data for speaker enrollment, other than creating a noisy version of speech data for the purpose of noise robustness. Therefore, it is interesting to investigate whether the class of data augmentation methods including pitch shifting, harmonic distortion, impulse response and mixing speech file are useful for speaker enrollment in TD-SV.

The main goal of this paper is to study the effect of different data augmentation techniques to increase the quantity of speaker enrollment data on the performance of speaker verification. We consider different strategies. First, speaker dependent models are trained for the particular augmentation method in the training phase and in the test phase, original evaluation data without augmentation are scored against the respective speaker models i.e. claimant specific models. It basically develops a separate SV system for each augmentation method. Score for a given test utterance from different systems are fused into a single value with average, maximum, minimum and median operations. Next, we also study the multi-conditioning training, where a speaker model is trained by pooling both augmentation data generated from different augmentation methods along with the original enrollment data in the database. The performance of TD-SV is studied on the RedDots challenge 2016 database [21] with the GMM-UBM technique. It is well know fact [22] that GMM-UBM yields lower error rate for speaker recognition using short utterances than the i-vector technique. Experimental results show that data augmentation reduces the error rates of TD-SV.

The paper is organized as follows: Section 2 describes the data augmentation methods. Section 3 describes the GMM-UBM technique for TD speaker verification. Experimental setup, and results and discussion are presented in Section 4 & Section 5, respectively. Finally, the paper is concluded in Section 6.

In this section, we briefly describe the different data augmentation techniques considered for TD-SV in this paper.

More details on augmentation techniques can be found in [12].

In this approach, a larger Gaussian mixture models (GMMs) [5] is trained using data from many non-target speakers called GMM-UBM. The GMM-UBM represents a large acoustic model space which covers the various attributes available in the data. In the enrollment phase, speaker dependent models (of the registered speakers) are then derived from the GMM-UBM using the training/enrollment data for the particular speaker with maximum a posteriori (MAP) adaptation. In the test phase, the feature vectors of the test utterance X={x1,x2,…,xT} is aligned against the claimant λr (obtained in enrollment phase) and GMM-UBM λubm models, respectively. Finally, a log-likelihood ratio value Λ(X) is calculated using scores between the claimant and GMM-UBM models and is used to decide whether the claimant will be accepted or rejected.

Experiments are performed on the male speakers’ parts (task m-part01) of the RedDots challenge 2016 database as per protocol [21]. There are 320 target (registered speakers) models to train and each has three sessions of recording speech samples. Utterances are very short in duration on an average of 2-3s duration. Database was recorded in the different countries and then send to the other country through different networks to introduce the channel effect in speech signal. More details about the database can be found in [21]. Four types of test trials are available in the evaluation set to evaluate the system performance in Table 1.

algorithm is applied to discard the less energized frames. Finally, selected frames are normalized to fit zero mean and unit variance normalization at utterance level. A gender independent GMM-UBM with

512 mixtures (having diagonal co-variance matrices) is trained using 6300 utterances from (438 males, 192 females) TIMIT database. 3 iterations are considered during MAP adaptation with the value of relevance factor 10. Audio degradation toolbox [12] is used to generate the augmentation data. To measure the performance of TD-SV, the equal error rate (EER) and minimum detection cost function (MinDCF) are used as per NIST 2008 SRE [25, 26].

In this section, we analyze the performance of TD-SV system for different data augmentation methods (in the enrollment phase) and tested on original evaluation data with or without noise.

Table 2 presents the comparison of TD-SV performance when speaker enrollment is done with or without data augmentation methods as well as various fusion strategies on the RedDot database (on task m-part01). Original indicates the speech files available in the database for training and testing. It is observed that the wow re-sampling augmentation method gives very close values of average EER/MinDCF compared to the baseline, i.e. the conventional system without data augmentation. This indicates that wow re-sampling generates content containing most speaker relevant information as compared with other augmentation techniques.

To further investigate the performance observed above, we plot the spectrograms of an original speech signal and the corresponding augmented data in Fig. 2. From Fig. 2, it is noticed that except for the wow re-sampling augmentation method, other methods significantly modify the structure of the spectrogram, especially on the higher frequency components (the most for IR method). These modifications are reflected in the performance of TD-SV. Now if we look at the score fusion among systems, fusion of a, b and f with the maximum method yields average EER of 2.46% and MinDCF of 1.04, both lower than those of the baseline system (a). This indicates the effectiveness of augmentation methods. Multi-condition (a,b,f) presents the TD-SV with multi-condition training, where a speaker model is derived from GMM-UBM with MAP by pooling original enrollment data along with wow re-sampling, sound mix augmentation data. However, the error rate of the multi-condition training is slightly higher than the baseline. This indicates score fusion is a better choice for TD-SV using augmentation data.

5.2 Effect on TD-SV performance using augmentation data for speaker enrollment when tested on a noisy version of the evaluation data

Experimental results on the noisy version of the evaluation data are presented in Table 3. The noisy version of the evaluation data is generated as per ITU protocol [27]. For simplicity, we present only the system performance for market and car noise scenarios for SNR values of 5 and 10 dB, and maximum method (found optimal in previous subsection) in score fusion. The multi-condition method is not studied here as it does not improve the SD-SV as shown in Table 2. From Table 3, it can be seen that error rates of all systems significantly increase and are expected due to the mismatch between the enrollment with clean data and the evaluation with noisy data. Similarly to the Table 2, wow re-sampling and Sound mix show lower error rates than the other augmentation methods and fusion further improves the TD-SV with respect to the baseline. This indicates the usefulness of the data augmentation in TD-SV under noisy conditions.

In this paper, we proposed to explore a set of data augmentation approaches for generating extra data to empower speaker enrollment, in contrast to the use of data augmentation for building speaker independent models for TD-SV, in low resource applications. In the proposed method, each speaker is represented by a number of models that are derived from GMM-UBM using the original enrollment data together with augmented data (generated from the original enrollment data) for the particular speaker. It gives different TD-SV systems corresponding to different augmentation approaches. In the test, a test utterance is scored against different systems and then fused them with different strategies. Besides, we also evaluated the performance of TD-SV under clean and noisy environment conditions. Experimental results depicted that score fusion of the conventional/baseline system with the proposed data augmentation system reduces the error rate of TD-SV compared to their standalone counterpart. Experiments were conducted on the RedDots challenge 2016 database.