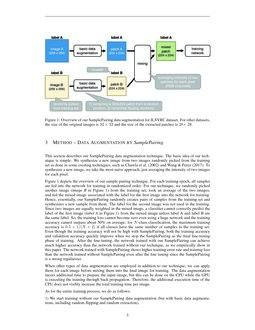 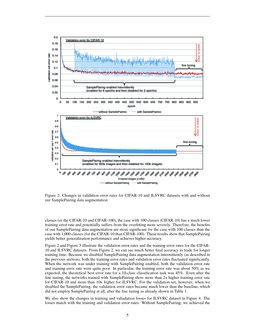 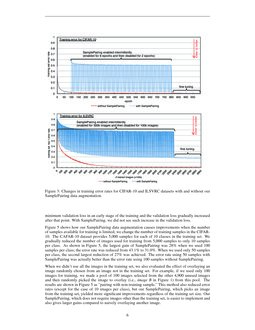 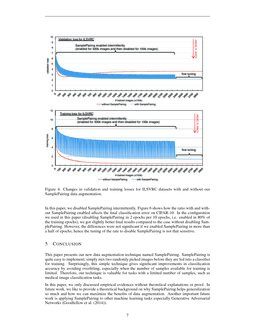 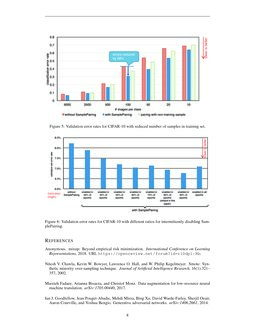 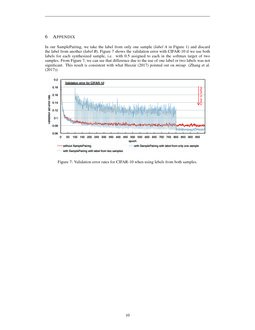 For machine learning tasks, such as image classification, machine translation, and text-to-speech synthesis, the amount of the samples available for training is critically important to achieve high performance by better generalization. Data augmentation, applying a small mutation in the original training data and synthetically creating new samples, is widely used to virtually increase the amount of training data (e.g. Krizhevsky et al. (2012), Szegedy et al. (2015), Fadaee et al. (2017)). There are a wide variety of approaches to synthesizing new samples from original training data; for example, traditional data augmentation techniques include flipping or distorting the input image, adding a small amount of noise, or cropping a patch from a random position. Use of data augmentation is mostly the norm for winning image classification contests.

In this paper, we introduce a simple but surprisingly effective data augmentation technique for image classification tasks. With our technique, named SamplePairing, we create a new sample from one image by overlaying another image randomly picked from the training data (i.e., simply taking an average of two images for each pixel). By using two images randomly selected from the training set, we can generate N2 new samples from N training samples. Even if we overlay another image, we use the label for the first image as the correct label for the overlaid (mixed) sample. This simple data augmentation technique gives significant improvements in classification accuracy for all tested datasets: ILSVRC 2012, CIFAR-10, CIFAR-100, and SVHN. For example, the top-1 error rate was reduced from 33.5% to 29.0% for the ILSVRC 2012 dataset with GoogLeNet and from 8.22% to 6.93% in the CIFAR-10 dataset with a simple 6-layer convolutional network. We also conducted data augmentation by overlaying an image picked from outside the training set; this approach also gives some improvements, but our technique, which picks an image to overlay from the training set, gives a far more significant gain. To show that our SamplePairing technique often gives larger benefits when the number of samples in the training data is smaller, we conducted the evaluations by reducing the number of samples used for training with the CIFAR-10. The results showed that our technique yields larger improvements in accuracy when the number of samples are smaller than the full CIFAR-10 dataset. When we used only 100 samples per label (thus, 1,000 samples in total), the classification error rate was reduced from 43.1% to 31.0% with our technique. Based on these results, we believe that our technique is more valuable for tasks with a limited number of training datasets available, such as medical image classification tasks.

When a model is trained with a small training set, the trained model tends to overly fit to the samples in the training set and results in poor generalization. Data augmentation has been widely used to avoid this overfitting (poor generalization) problem by enlarging the size of the training set; thus, it allows the use of a larger network without significant overfitting. For example, Krizhevsky et al. employ a couple of data augmentation techniques in their Alexnet paper (Krizhevsky et al. (2012)) using random numbers: 1) randomly cropping patches of 224×224 pixels from the original image of 256×256

pixels, 2) horizontally flipping the extracted patches, and 3) changing the intensity of RGB channels. Many submissions in the ImageNet Large Scale Visual Recognition Challenge (ILCVRC) employed the first two techniques, which can give a 2048x increase in the dataset size. Our SamplePairing technique is another way to enlarge the dataset size. Since it creates pairs of images, it gives

N2 samples from the original N

Ioffe & Szegedy (2015)), which intends to solve the problem of internal covariate shift, is also known to be (potentially) effective to prevent overfitting. Our SamplePairing data augmentation is again orthogonal to these techniques and we can employ both techniques to achieve better generalization performance.

A paper on a technique called mixup (Anonymous (2018), Zhang et al. (2017)) is submitted to the same conference (ICLR 2018). Although developed totally independently, mixup also mixes two randomly selected samples to create a new training data as we do in this paper. The differences between our SamplePairing and mixup include 1) mixup overlaying sample labels as well while we use the label from only one sample, 2) they use weighted average (with randomly selected weight) to overlay two samples and 3) they tested tasks other than image classification including speech recognition and Generative Adversarial Network (Goodfellow et al. (2014)). About the label to be used in training, Huszár (2017) pointed out that using the label from only one sample without overlaying the labels from two examples will resulted in the same learning result. This way is simpler than blending two labels and also is suitable for a semi-supervised setting. We also tested overlaying labels from two samples in our SamplePairing and we did not see the differences in the results larger than those due to a random number generator (see appendix).

This section describes our SamplePairing data augmentation technique. The basic idea of our technique is simple: We synthesize a new image from two images randomly picked from the training set as done in some existing techniques, such as Chawla et al. (2002) and Wang & Perez (2017). To synthesize a new image, we take the most naive approach, just averaging the intensity of two images for each pixel.

Figure 1 depicts the overview of our sample pairing technique. For each training epoch, all samples are fed into the network for training in randomized order. For our technique, we randomly picked another image (image B

in Figure 1) from the training set, took an average of the two images, and fed the mixed image associated with the label for the first image into the network for training. Hence, essentially, our SamplePairing randomly creates pairs of samples from the training set and synthesizes a new sample from them. The label for the second image was not used in the training. Since two images are equally weighted in the mixed image, a classifier cannot correctly predict the label of the first image (

When other types of data augmentation are employed in addition to our technique, we can apply them for each image before mixing them into the final image for training. The data augmentation incurs additional time to prepare the input image, but this can be done on the CPU while the GPU is executing the training through back propagation. Therefore, the additional execution time of the CPU does not visibly increase the total training time per image.

As for the entire training process, we do as follows:

2) After completing one epoch (for the ILSVRC) or 100 epochs (for other datasets) without SamplePairing, we enable SamplePairing data augmentation.

4) To complete the training, after the training loss and the accuracy become mostly stable during the progress of the training, we disable the SamplePairing as the fine-tuning.

For the ILSVRC dataset, we used GoogLeNet (Szegedy et al. (2015)

) as the network architecture and trained the network using stochastic gradient descent with momentum as the optimization method with the batch size of 32 samples. For other datasets, we used a network that has six convolutional layers with batch normalization (

). We used the same network architecture except for the number of neurons in the output layer. We trained the network using Adam (

Kingma & Ba (2014)) as the optimizer with the batch size of 100. During the training, we used data augmentations by extracting a patch from a random position of the input image and using random horizontal flipping as the baseline regardless of whether or not it was with our SamplePairing as shown in Figure 1. In this paper, we do not ensemble predictions in the results. For the validation set, we extracted the patch from the center position and fed it into the classifier without horizontal flipping. We implemented our algorithm using Chainer (Tokui et al. (2015)) as the framework.

When we didn’t use all the images in the training set, we also evaluated the effect of overlaying an image randomly chosen from an image not in the training set. For example, if we used only 100 images for training, we made a pool of 100 images selected from the other 4,900 unused images and then randomly picked the image to overlay (i.e., image B in Figure 1) from this pool. The results are shown in Figure 5 as ”pairing with non-training sample.” This method also reduced error rates (except for the case of 10 images per class), but our SamplePairing, which picks an image from the training set, yielded more significant improvements regardless of the training set size. Our SamplePairing, which does not require images other than the training set, is easier to implement and also gives larger gains compared to naively overlaying another image.

This paper presents our new data augmentation technique named SamplePairing. SamplePairing is quite easy to implement; simply mix two randomly picked images before they are fed into a classifier for training. Surprisingly, this simple technique gives significant improvements in classification accuracy by avoiding overfitting, especially when the number of samples available for training is limited. Therefore, our technique is valuable for tasks with a limited number of samples, such as medical image classification tasks.

In this paper, we only discussed empirical evidences without theoretical explanations or proof. In future work, we like to provide a theoretical background on why SamplePairing helps generalization so much and how we can maximize the benefits of data augmentation. Another important future work is applying SamplePairing to other machine learning tasks especially Generative Adversarial Networks (Goodfellow et al. (2014)).

In our SamplePairing, we take the label from only one sample (label A in Figure 1) and discard the label from another (label B). Figure 7 shows the validation error with CIFAR-10 if we use both labels for each synthesized sample, i.e. with 0.5 assigned to each in the softmax target of two samples. From Figure 7, we can see that difference due to the use of one label or two labels was not significant. This result is consistent with what Huszár (2017) pointed out on mixup (Zhang et al. (2017)).