In previous works, only parameter weights of ASR models are optimized under fixed-topology architecture. However, the design of successful model architecture has always relied on human experience and intuition. Besides, many hyperparameters related to model architecture need to be manually tuned. Therefore in this paper, we propose an ASR approach with efficient gradient-based architecture search, DARTS-ASR. In order to examine the generalizability of DARTS-ASR, we apply our approach not only on many languages to perform monolingual ASR, but also on a multilingual ASR setting. Following previous works, we conducted experiments on a multilingual dataset, IARPA BABEL. The experiment results show that our approach outperformed the baseline fixed-topology architecture by 10.2 error rates under monolingual and multilingual ASR settings respectively. Furthermore, we perform some analysis on the searched architectures by DARTS-ASR. 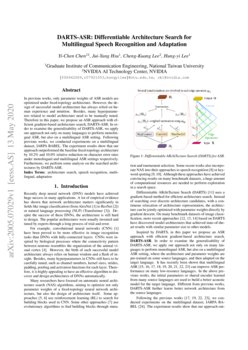 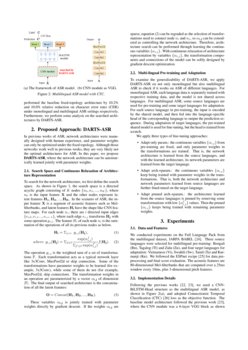 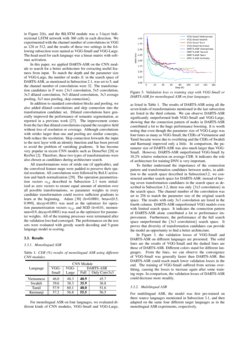 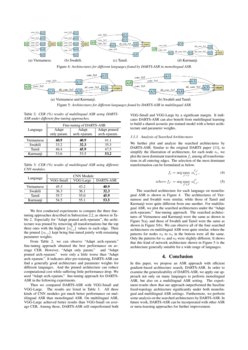 A Study of Multilingual End-to-End Speech Recognition for Kazakh, Russian, and English

In this paper, we explore the neural architecture search (NAS) for autom...
Liqiang He, et al. ∙

Recently deep neural network (DNN) models have achieved huge success in many applications. A lot of empirical evidence has shown that network architecture matters significantly in fields like image classification (from AlexNet

[3]). Despite the success of these DNNs, the architecture is still hard to design. The popular architectures were usually invented and tuned by experts through a long process of trial and error.

have been proved to be more effective in image recognition tasks than DNNs with fully-connected layers. CNNs were inspired by biological processes where the connectivity pattern between neurons resembles the organization of the animal visual cortex

. However, the birth of such successful model architecture always relies on human wisdom and a flash of insight. Besides, many hyperparameters in CNNs still have to be carefully tuned, such as channel numbers, kernel sizes, strides, padding, pooling and activation functions for each layer. Therefore, it is highly appealing to have an effective algorithm to discover and design architectures of DNNs automatically.

Many researchers have focused on automatic neural architecture search (NAS) algorithms, aiming to optimize not only parameter weights of a fixed-topology neural network architecture, but also the design of architecture itself. Some approaches [5, 6]

use reinforcement learning (RL) to search for building blocks used in CNN. Some other approaches

use evolutionary algorithms to find building blocks through mutation and tournament selection. Some recent works also incorporate NAS into their approaches to speech recognition

[8] or keyword spotting [9, 10]. Although these approaches have achieved convincing results on many benchmark datasets, a huge amount of computational resources are needed to perform exploration in a search space.

Differentiable ARchiTecture Search (DARTS) [11] uses a gradient-based method for efficient architecture search. Instead of searching over discrete architecture candidates, with a continuous relaxation of architecture representation, the architecture can be jointly optimized with parameter weights directly by gradient descent. On many benchmark datasets of image classification, more recent approaches [12, 13, 14] based on DARTS have discovered model architectures that achieved state-of-the-art results with similar parameter size to other models.

Inspired by DARTS, in this paper we propose an ASR approach with efficient gradient-based architecture search, DARTS-ASR. In order to examine the generalizability of DARTS-ASR, we apply our approach not only on many languages to perform monolingual ASR, but also on a multilingual ASR setting, where the architecture and parameter weights are pre-trained on some source languages, and then adapted on the target language. It has recently been shown that multilingual ASR [15, 16, 17, 18, 19, 20, 21, 22, 23] can improve ASR performance on many low-resource languages. In the above previous works, the initial parameters or shared encoder learned from many source languages are used to build a better acoustic model for the target language. Different from previous works, DARTS-ASR further learns better network architecture from the source languages.

Following the previous works [17, 19, 22, 23], we conducted experiments on the multilingual dataset, IARPA BABEL [24]. The experiment results show that our approach outperformed the baseline fixed-topology architecture by 10.2% and 10.0% relative reduction on character error rates (CER) under monolingual and multilingual ASR settings respectively. Furthermore, we perform some analysis on the searched architectures by DARTS-ASR.

To search for the network architecture, we first define the search space. As shown in Figure 1, the search space is a directed acyclic graph consisting of K nodes {n0,n1,...,nK}, where n0 is the input feature X and the other nodes represent latent features H1,H2,...,HK. In the scenario of ASR, the input feature X is a segment of acoustic features such as Mel-filterbanks, and latent features Hi have the shape like CNN feature maps. For each node ni, there are i directed input edges {ei,0,ei,1...,ei,i−1}, where each edge ei,j transforms Hj with some operation gi,j. The feature Hi of each node ni is the summation of the operations of all its previous nodes as below.

The operation gi,j is the weighted sum of a set of transformations F

αi,j of dimension |F|. The final output of searched architecture is the concatenation of all the latent features:

These variables αi,j is jointly trained with parameter weights directly by gradient descent. If the weights αi,j are sparse, equation (2) can be regraded as the selection of transformations used to connect node ni and nj, so αi,j can be considered as controlling the network architecture. Therefore, architecture search can be performed through learning the continuous variables {αi,j}. With continuous relaxation of architecture representation by variables {αi,j}, the transformation components and connections of the model can be softly designed by gradient descent optimization.

To examine the generalizability of DARTS-ASR, we apply DARTS-ASR on not only monolingual but also multilingual ASR to check if it works on ASR of different languages. For monolingual ASR, each language data is separately trained with respective training data, and the model is not shared across languages. For multilingual ASR, some source languages are used for pre-training and some target languages for adaptation. For each source language in pre-training, the input is encoded by the shared model, and then fed into the language-specific head of the corresponding language to output the prediction sequence. During adaptation of target languages, the pre-trained shared model is used for fine-tuning, but the head is trained from scratch.

We conducted experiments on the Full Language Pack from the multilingual dataset, IARPA BABEL [24]. Three source languages were selected for multilingual pre-training: Bengali (Bn), Tagalog (Tl) and Zulu (Zu), and four target languages for adaptation: Vietnamese (Vi), Swahili (Sw), Tamil (Ta) and Kurmanji (Ku). We followed the ESPnet recipe [25] for data preprocessing and final score evaluation. The acoustic features are 80-dimensional Mel-filterbanks that are computed over a 25ms window every 10ms, plus 3-dimensional pitch features.

Following the previous works [22, 23], we used a CNN-BiLSTM-Head structure as the multilingual ASR model, as shown in Figure 2(a), and adopted Connectionist Temporal Classification (CTC) [26] loss as the objective function. The baseline model architecture followed the previous work [23], where the CNN module was a 6-layer VGG block as shown in Figure 2(b), and the BiLSTM module was a 3-layer bidirectional LSTM network with 360 cells in each direction. We experimented with the channel number of convolutions in VGG as 128 or 512, and the results of these two settings in the following subsection were named as VGG-Small and VGG-Large. The head used for each language was a linear matrix with softmax activation.

In this paper, we applied DARTS-ASR on the CNN module to search for a better architecture for extracting useful features from input. To match the depth and the parameter size of VGG-Large, the number of nodes K in the search space of DARTS-ASR, as mentioned in Subsection 2.1, was set to 5, and the channel number of convolutions were 32. The transformation candidates in F

In addition to standard convolution blocks and pooling, we also added dilated convolutions and skip connection into the transformation candidate set. Dilated convolutions have generally improved the performance of semantic segmentation, as reported in a previous work [27]. The improvement comes from the fact that dilated convolutions expand the receptive field without loss of resolution or coverage. Although convolutions with strides larger than one and pooling are similar concepts, both reduce the resolution. Skip connection forwards the input to the next layer with an identity function and has been proved to avoid the problem of vanishing gradients. It has become very popular in recent CNN models such as DenseNet [28] or ResNet [2]. Therefore, these two types of transformations were also chosen as candidates during architecture search.

All transformations were of stride one (if applicable), and the convolved feature maps were padded to preserve their spatial resolution. All convolutions were followed by ReLU activation and batch normalization

[29]. The operation parametrization vectors αi,j described in Subsection 2.1 were initialized as zero vectors to ensure equal amount of attention over all possible transformations, so parameter weights in every candidate transformation could receive sufficient gradients to learn at the beginning. Adam [30] (lr=0.0001, betas=[0.5, 0.999], decay=0.001) was used as the optimizer for operation parametrization vectors αi,j, and SGD (lr=0.01, momentum=0.9, decay=0.0003) was used as the optimizer for parameter weights. All of the training processes were terminated after the validation loss had converged. The performances on the test sets were evaluated with greedy search decoding and 5-gram language model re-scoring.

For monolingual ASR on four languages, we evaluated diiferent kinds of CNN modules, VGG-Small and VGG-Large, as listed in Table 1. The results of DARTS-ASR using all the seven kinds of transformations mentioned in the last subsection are listed in the third column. We can observe DARTS-ASR significantly outperformed both VGG-Small and VGG-Large, showing that the connection pattern of nodes in DARTS-ASR contributed a lot to the huge performance boosting. It is worth noting that even though the parameter size of VGG-Large was four times as many as VGG-Small, the CERs of Vietnamese and Tamil became worse due to overfitting and the CERs of Swahili and Kurmanji improved only a little. In comparison, the parameter size of DARTS-ASR was also much larger than VGG-Small. However, DARTS-ASR outperformed VGG-Small by 10.2% relative reduction on average CER. It indicates the role of architecture for training DNN is very important.

For multilingual ASR, the model was first pre-trained on three source languages mentioned in Subsection 3.1, and then adapted on the same four different target languages as in the monolingual ASR experiments, respectively.

We first conducted experiments to compare the three fine-tuning approaches described in Subsection 2.2, as shown in Table 2. Especially for “Adapt pruned arch.+params”, the architecture was pruned by removing all transformations but the top three ones with the highest {αfi,j} values in each edge. Then the pruned {αi,j} kept being fine-tuned jointly with remaining parameter weights.

In this paper, we propose an ASR approach with efficient gradient-based architecture search, DARTS-ASR. In order to examine the generalizability of DARTS-ASR, we apply our approach not only on many languages to perform monolingual ASR, but also on a multilingual ASR setting. The experiment results show that our approach outperformed the baseline fixed-topology architecture significantly under both monolingual and multilingual ASR settings. Furthermore, we perform some analysis on the searched architectures by DARTS-ASR. In future work, DARTS-ASR can be incorporated with other ASR or meta-learning approaches for further improvement.