Nowadays, Deep learning techniques show dramatic performance on computer vision area, and they even outperform human. This is a problem combined with the safety of artificial intelligence, which has recently been studied a lot. These attack have shown that they can fool models of image classification, semantic segmentation, and object detection. We point out this attack can be protected by denoise autoencoder, which is used for denoising the perturbation and restoring the original images. We experiment with various noise distributions and verify the effect of denoise autoencoder against adversarial attack in semantic segmentation 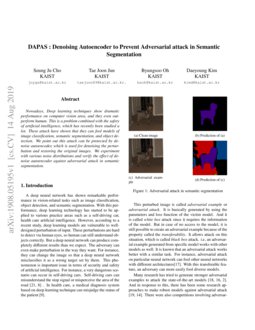 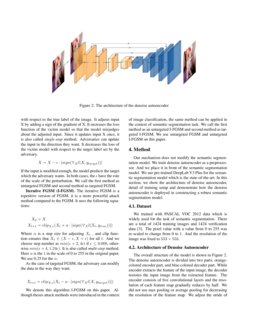 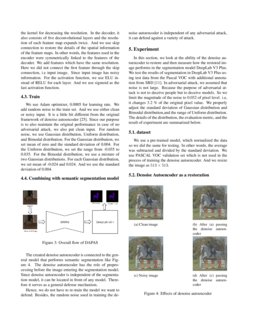 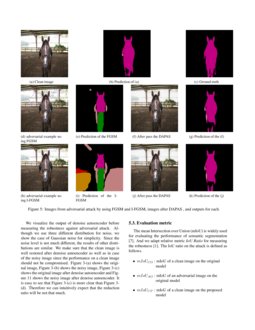 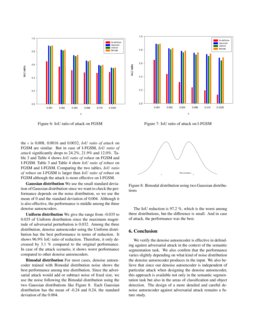 Semantic segmentation is one of the most impactful applications of machi...
Guangyu Shen, et al. ∙

Synergy Between Semantic Segmentation and Image Denoising via Alternate Boosting

The capability of image semantic segmentation may be deteriorated due to...
Shunxin Xu, et al. ∙

Applying Tensor Decomposition to image for Robustness against Adversarial Attack

A deep neural network has shown remarkable performance in vision-related tasks such as image classification, object detection, and semantic segmentation. With this performance, deep learning technology has started to be applied to various practice areas such as a self-driving car, health care artificial intelligence. However, according to a recent study, deep learning models are vulnerable to well-designed perturbation of input. These perturbations are hard to detect via human eyes, so human can still understand objects correctly. But a deep neural network can produce completely different results than we expect. The adversary can even make perturbation in the way they want. For instance, they can change the image so that a deep neural network misclassifies it as a wrong target set by them. This phenomenon is important issue in terms of security and safety of artificial intelligence. For instance, a very dangerous scenario can occur in self-driving cars. Self-driving cars can misunderstand the stop signal or misperceive the area of the road

[sitawarin2018darts, eykholt2018robust] . In health care, a medical diagnosis system based on deep learning technique can misjudge the status of the patient [finlayson2018adversarial].

. It is basically generated by using the parameters and loss function of the victim model. And it is called

white box attack since it requires the information of the model. But in case of no access to the model, it is still possible to create an adversarial example because of the property called the transferability. It allows attack on this situation, which is called black box attack. i.e, an adversarial example generated from specific model works with other models as well. It is known that an adversarial attack works better with a similar task. For instance, adversarial attack on particular neural network can fool other neural networks with different architectures[papernot2016transferability]. With this transferable feature, an adversary can more easily fool diverse models.

Many research has tried to generate stronger adversarial examples to attack the state-of-the-art models [papernot2016limitations, moosavi2016deepfool, carlini2017towards]. And in response to this, there has been some research approaches to make robust models against adversarial attack [papernot2016distillation, meng2017magnet]. There were also competitions involving adversarial attack and defense in the field of image classification [kurakin2018adversarial]. Several methods for attack and defense are proposed. However, many of the attack and defense involved in adversarial examples have been limited to the problem of image classification. Although there are related works which deal with the semantic segmentation and object detection [thys2019fooling, 8237562, xie2017adversarial]

, only attack scenarios are addressed and studies of defense scenarios for complex tasks such as semantic segmentation are insufficient. Also, for the defense model of the classification task, they often use simple dataset like MNIST, CIFAR 10, which have a small resolution. Therefore, it is needed to experiment with images which have large resolution since more complicated images are used in the real world. In addition, we need to study the defense scenario of semantic segmentation since it is more practical. For instance, in autonomous driving vehicles or medical intelligence, most of the scene understanding is performed through semantic segmentation rather than classification.

[everingham2010pascal] and test it on the DeepLab V3 Plus [chen2018encoder] which has one of the state-of-the-art models in the field of semantic segmentation task. We first generate an adversarial example of DeepLab V3 Plus, and we verify that our approach is effective against adversarial attack on semantic segmentation. As a result, the performance of our proposed model was around 97 % compared to the original model DeepLab V3 Plus on clean image. In the case of an adversarial attack, the performance of DeepLab V3 Plus dropped to about 13 % of the original performance, but when it passed our denoise autoencoder, it covered up to 68 % compared to the original performance. Therefore, the method we proposed confirmed that the attack is effectively defended while minimizing performance degradation. In addition, we don’t have to retrain the segmentation model. We leave the model we want to defend as it is, and we defend the model by putting a DAPAS in front of it.

The content of the remaining parts is as follows. We show an overall review of related work in Section 2. And we explain our method and show our architecture in Section 3. In Section 4, We evaluate our defense method with an adversarial example. And the conclusion and discussion are provided in Section 5.

Szegedy et al. found the existence of perturbation that breaks the classifier

[42503]. This paper presents a simple and effective attack called Fast Gradient Sign Method (FGSM) [43405]. It shows small perturbation is enough to fool the classifier. [moosavi2016deepfool] measures the minimum size required for the attack. They give better intuition of the existence of adversarial example by calculating sufficient magnitude of the perturbation. In addition to classification problems, [8237562, xie2017adversarial] shows the adversarial attack on the task of the segmentation model and object detection. And [arnab2018robustness] experiments and analyzes the effect of the adversarial attack on the various semantic segmentation models such as DeepLab V2 [chen2017deeplab] and PSPNet [zhao2017pyramid].

To counter adversarial attacks, some works trained the model with the normal example and adversarial example [kurakin2016adversarial, tramer2017ensemble] which is called adversarial training. During the process of training, they generate adversarial for the training. Although it works, it depends on the particular adversarial data used in the training process. For instance, [kurakin2016adversarial] shows their approach is robust in the simple attack, but not in a more sophisticated attack. In addition, it has engineering penalty since it requires retraining the model. If it takes longer to create an adversarial example, it will take more time to retrain the model. Instead of using the data augmentation, methods to change the model itself were also proposed [elsayed2018large, cisse2017parseval]. They change the objective function of the problem for obtaining the robustness. However, this approach also requires retraining the model so it costs time. [samangouei2018defense, meng2017magnet] preprocess the image before putting in to the model. This approach is similar to our work, but they experiment with the image which has a small resolution like MNIST and CIFAR series.

Basically, all of the attacks use the gradient of data with respect to the loss function of victim model. In this section, we briefly review the basic method of adversarial attack.

Fast Gradient Sign Method (FGSM). The FGSM is proposed by [43405]. It is simple and effective attack method.

Where ϵ is a magnitude of noise and l(X,ytrue) is a loss with respect to the true label of the image. It adjusts input X by adding a sign of the gradient of X. It increases the loss function of the victim model so that the model misjudges about the adjusted input. Since it updates input X once, it is also called single-step method. Adversaries can update the input in the direction they want. It decreases the loss of the victim model with respect to the target label set by the adversary.

If the input is modified enough, the model predicts the target which the adversary wants. In both cases, the ϵ have the role of the scale of the perturbation. We call the first method as untargeted FGSM and second method as targeted FGSM.

Iterative FGSM (I-FGSM). The iterative FGSM is a repetitive version of FGSM. it is a more powerful attack method compared to the FGSM. It uses the following equations:

As the case of targeted FGSM, the adversary can modify the data in the way they want.

We trained with PASCAL VOC 2012 data which is widely used for the task of semantic segmentation. There are a total of 1424 training images and 1424 verification data [3]. The pixel value with a value from 0 to 255 was re-scaled to change from 0 to 1. And the resolution of the image was fixed to 553×553.

The overall structure of the model is shown in Figure 2. The denoise autoencoder is divided into two parts, orange-colored encoder part, and blue-colored decoder part. While encoder extracts the feature of the input image, the decoder restores the input image from the extracted feature. The encoder consists of five convolutional layers and the resolution of each feature map gradually reduces by half. We did not use max pooling or average pooling for decreasing the resolution of the feature map. We adjust the stride of the kernel for decreasing the resolution. In the decoder, it also consists of five deconvolutional layers and the resolution of each feature map expands twice. And we use skip connection to restore the details of the spatial information of the feature maps. In other words, the features used in the encoder were symmetrically linked to the features of the decoder. We add features which have the same resolution. Here we did not connect the first feature through the skip connection, i.e input image. Since input image has noisy information. For the activation function, we use ELU instead of RELU for each layer. And we use sigmoid as the last activation function.

We use Adam optimizer, 0.0005 for learning rate. We add random noise to the train set. And we use either clean or noisy input. It is a little bit different from the original framework of denoise autoencoder [vincent2010stacked]

Hence, we do not have to re-train the model we want to defend. Besides, the random noise used in training the denoise autoencoder is independent of any adversarial attack, it can defend against a variety of attack.

In this section, we look at the ability of the denoise autoencoder to restore and then measure how the restored image performs in the segmentation model DeepLab V3 Plus. We test the results of segmentation in DeepLab V3 Plus using test data from the Pascal VOC with additional annotation from SBD [hariharan2011semantic]

. In adversarial attack, we assumed that noise is not large. Because the purpose of adversarial attack is not to deceive people but to deceive models. So we limit the magnitude of the noise to 0.032 of pixel level. i.e, it changes 3.2 % of the original pixel value. We properly adjust the standard deviation of Gaussian distribution and Bimodal distribution,and the range of Uniform distribution. The details of the distribution, the evaluation metric, and the result of experiment are summarized below.

We use a pre-trained model, which normalized the data so we did the same for testing. In other words, the average was subtracted and divided by the standard deviation. We use PASCAL VOC validation set which is not used in the process of training the denoise autoencoder. And we resize the image as 513×513.

5.2 Denoise Autoencoder as a restoration

The mean Intersection over Union (mIoU) is widely used for evaluating the performance of semantic segmentation [everingham2010pascal]. And we adapt relative metric IoU Ratio for measuring the robustness [arnab2018robustness]. The IoU ratio on the attack is defined as follows.

The IoU reduction is 97.2 %, which is the worst among three distributions, but the difference is small. And in case of attack, the performance was the best.