How to express an expert's or a decision maker's preference for alternatives is an open issue. Consistent fuzzy preference relation (CFPR) is with big advantages to handle this problem due to it can be construed via a smaller number of pairwise comparisons and satisfies additive transitivity property. However, the CFPR is incapable of dealing with the cases involving uncertain and incomplete information. In this paper, a D numbers extended consistent fuzzy preference relation (D-CFPR) is proposed to overcome the weakness. The D-CFPR extends the classical CFPR by using a new model of expressing uncertain information called D numbers. The D-CFPR inherits the merits of classical CFPR and can be totally reduced to the classical CFPR. This study can be integrated into our previous study about D-AHP (D numbers extended AHP) model to provide a systematic solution for multi-criteria decision making (MCDM). 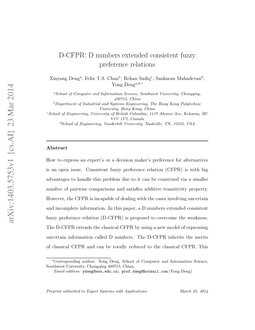 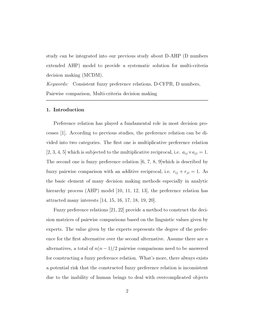 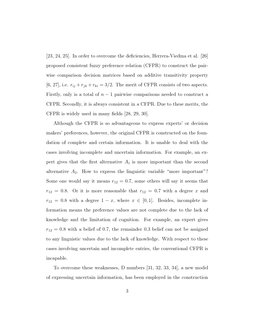 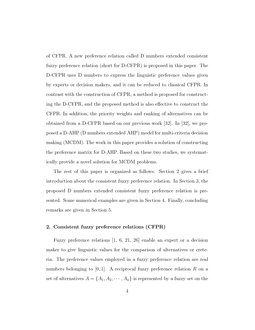 Defuzzify firstly or finally: Dose it matter in fuzzy DEMATEL under uncertain environment?

A New Medical Diagnosis Method Based on Z-Numbers

How to handle uncertainty in medical diagnosis is an open issue. In this...
Dong Wu, et al. ∙

Deontic modality based on preference

Relational models for diagnosis are based on a direct description of the...
Didier Dubois, et al. ∙

In this paper, we present an approach that is able to handle with Z-numb...
R. A. Krohling, et al. ∙

Although the CFPR is so advantageous to express experts’ or decision makers’ preferences, however, the original CFPR is constructed on the foundation of complete and certain information. It is unable to deal with the cases involving incomplete and uncertain information. For example, an expert gives that the first alternative A1 is more important than the second alternative A2. How to express the linguistic variable “more important”? Some one would say it means r12=0.7, some others will say it seems that r12=0.8. Or it is more reasonable that r12=0.7 with a degree x and r12=0.8 with a degree 1−x, where x∈[0,1]. Besides, incomplete information means the preference values are not complete due to the lack of knowledge and the limitation of cognition. For example, an expert gives r12=0.8 with a belief of 0.7, the remainder 0.3 belief can not be assigned to any linguistic values due to the lack of knowledge. With respect to these cases involving uncertain and incomplete entries, the conventional CFPR is incapable.

To overcome these weaknesses, D numbers Deng2012DNumbers ; Deng2014DAHPSupplier ; Deng2014EnvironmentDNs ; Deng2014BridgeDNs , a new model of expressing uncertain information, has been employed in the construction of CFPR. A new preference relation called D numbers extended consistent fuzzy preference relation (short for D-CFPR) is proposed in this paper. The D-CFPR uses D numbers to express the linguistic preference values given by experts or decision makers, and it can be reduced to classical CFPR. In contrast with the construction of CFPR, a method is proposed for constructing the D-CFPR, and the proposed method is also effective to construct the CFPR. In addition, the priority weights and ranking of alternatives can be obtained from a D-CFPR based on our previous work Deng2014DAHPSupplier . In Deng2014DAHPSupplier , we proposed a D-AHP (D numbers extended AHP) model for multi-criteria decision making (MCDM). The work in this paper provides a solution of constructing the preference matrix for D-AHP. Based on these two studies, we systematically provide a novel solution for MCDM problems.

when the cardinality of A is small, the preference relation may be conveniently represented by an n×n matrix R=[rij]n×n, being rij=μR(Ai,Aj)∀i,j∈{1,2,⋯,n}, namely

The biggest advantage of CFPRs is that it is reciprocal and consistent. Based on the results presented in Eq.(3) and Eq.(4), a CFPR can be constructed from the set of n−1 values {r12,r23,⋯,r(n−1)n}. That means only n−1 pairwise comparisons are required in the process of constructing a CFPR. Compared with the construction of the ordinary fuzzy preference relation which requires n(n−1)/2 pairwise comparisons, the rest of (n−1)(n−2)/2 pairwise comparisons are computed by using additive transitivity property in the construction of CFPRs. It is noted that the values in the generated CFPR may do not fall in the interval [0,1], but fall in an interval [−a,1+a], a>0. In such a case, the values in the obtained CFPR need to be transformed by using a transformation function that preserves reciprocity and additive consistency. The transformation function is defined as HerreraViedma2004someiss :

denoeux2013maximum , decision making casanovas2012fuzzy ; mokhtari2012decision ; yager2013decision , and so forth srivastava2009representation ; klein2012belief ; cuzzolin2010geometry ; cuzzolin2012relative ; kang2012evidential ; wei2013identifying ; Deng2013TOPPER . However, there are some weaknesses in Dempster-Shafer theory. D numbers overcome a few of existing deficiencies (i.e., exclusiveness hypothesis and completeness constraint) in Dempster-Shafer theory and appear to be more effective in representing various types of uncertainties. Some basic concepts about D numbers are given as follows.

where ∅ is the empty set and B is a subset of Θ.

Let D be a D number on a finite nonempty set Θ, the degree of information’s completeness in D is quantified by

For the sake of simplification, the degree of information’s completeness of a D number is called as its Q value.

where bi∈R, vi>0 and n∑i=1vi≤1. For the sake of simplification, the integration representation of a D number is called as its I value.

As mentioned above, the CFPR provides an option to establish the decision matrix which only requires n−1 pairwise comparisons. Moreover, the reciprocity and additive consistency have been preserved in a CFPR. However, the original CFPR is constructed on the foundation of complete and certain information. It is unable to deal with the cases involving incomplete and uncertain information. This deficiency also has existed in the fuzzy preference relation. For example, assume there are n experts who were invited to evaluate alternatives Ai and Aj. Consider these cases.

Case 2: x experts evaluate that Ai is preferred to Aj with a degree dx, the remainder y experts do not give any evaluations due to the lack of knowledge, where x<n and y=n−x.

In Eq.(11), RD is called a D-CFPR because it is constructed based on n−1 pairwise comparisons denoted as {D12,D23,⋯,D(n−1)n} which is a set of D numbers. Here, a method is proposed to implement the construction of D-CFPRs.

in which every component (bkji,vkji) is obtained by

At second, for the rest of entries in the D-CFPR, they can be calculated based on the reciprocal property, namely Dji=¬Dij, ∀i,j∈{1,2,⋯n}.

According to the aforementioned two steps, a D-CFPR can be constructed based on n−1 pairwise comparisons {D12,D23,⋯,D(n−1)n}. For the generated D-CFPR, it is possible that some values of bijs in these D numbers {Dij,i,j∈{1,2,⋯,n}} do not fall in the interval [0,1], but fall in an interval [−a,1+a], a>0. In such a case, the values of all bijs in every D numbers need to be transformed by using a transformation function which is given in Eq.(5). The transformation function works as normalization, which transforms the values of bijs from [−a,1+a] to the interval [0,1].

In summary, the proposed method to construct a D-CFPR RD on alternatives {A1,A2,⋯,An,n≥2} from n−1 preference values {D12,D23,⋯,D(n−1)n} is implemented as the following steps:

). At second, construct a probability matrix

In this section, some numerical examples are given to show the construction of D-CFPRs.

By applying the method proposed in HerreraViedma2004someiss , a CFPR is obtained:

Finally, the method proposed in literature Deng2014DAHPSupplier is utilized in order to obtain the priority weight of each alternative. The calculating process is omitted. Some important intermediate results are given as follows.

The inconsistency degree is I.D.=0.04(4−1)/2=0.0. The obtained Priority weights and ranking of alternatives are shown in Table 1.

Due to the preference values in R′D do not totally fall in the interval [0,1], but fall in an interval [−0.05,1.05], the transformation function shown in Eq.(5) will be used to obtain the final D-CFPR RD. The result is given as below.

Similar with Example 1, in order to obtain the priority weight of each alternative, the method proposed in literature Deng2014DAHPSupplier is employed. Some important intermediate results are given as follows.

In this paper, we have studied the consistent fuzzy preference relation (CFPR) by combining with D numbers. The proposed new preference relation is called D numbers extended consistent fuzzy preference relation, shorted for D-CFPR. A method is proposed to implement the construction of D-CFPR based on a set of preference values which are expressed by D numbers. In comparison with CFPR, D-CFPR is able to deal with the case that preference values involve incomplete and uncertain information. D-CFPR can be reduced to the classical CFPR when the preference values expressed by D numbers have degenerated to real numbers. What’s more, based on our previous study in Deng2014DAHPSupplier , the priority weights and ranking of alternatives can be obtained given a D-CFPR. In Deng2014DAHPSupplier , the hierarchical structure of D-AHP model has been established. In this paper, the proposed D-CFPR can be employed to construct the preference matrix for D-AHP. Based on these two studies, the D-AHP model has been systematically built. In the future, we will focus on the application of proposed D-CFPR and D-AHP model.