In this paper, we propose a novel technique for sampling sequential images using a cylindrical transform in a cylindrical coordinate system for kidney semantic segmentation in abdominal computed tomography (CT). The images generated from a cylindrical transform augment a limited annotated set of images in three dimensions. This approach enables us to train contemporary classification deep convolutional neural networks (DCNNs) instead of fully convolutional networks (FCNs) for semantic segmentation. Typical semantic segmentation models segment a sequential set of images (e.g. CT or video) by segmenting each image independently. However, the proposed method not only considers the spatial dependency in the x-y plane, but also the spatial sequential dependency along the z-axis. The results show that classification DCNNs, trained on cylindrical transformed images, can achieve a higher segmentation performance value than FCNs using a limited number of annotated images. 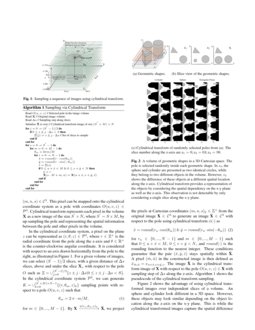 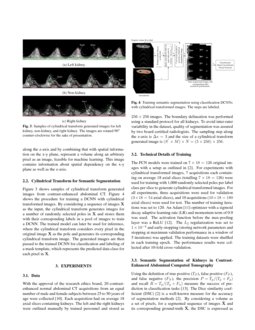 Object recognition refers to the task of detecting and labeling all objects in a given image. A bounding box is usually used in this approach to localize the object(s). In object detection, bounding boxes are used to localize a specific object in the image and the rest of the image is assigned to the non-object class. Semantic segmentation refers to the classification of each pixel in an image to generate an image mask consisting of a number of labeled regions. Object recognition approaches are generally easier to implement and computationally less expensive than semantic segmentation methods. However, accuracy and pixel-depth segmentation can be more important than computational complexity in certain applications such as medical image processing.

Deep fully convolutional networks (FCNs) [1] are popular models for semantic segmentation [2] that use a convolutional decoder with a large annotated training dataset. Since there are limited numbers of annotated images and data samples available for every possible class in real-world problems [3], augmentation methods such as image rotation and synthesis [4] can help increase the diversity of training datasets, and therefore prevent the models from overfitting [2], [5], [6]. In [5], we have proposed a radial transform method in the polar coordinate system as a novel augmentation method for classification problems. This technique is well suited for highly imbalanced datasets, or datasets with a limited number of labeled images.

In this paper, we propose a cylindrical transform in the cylindrical coordinate system as a technique to generate representations from limited annotated sequential images. The cylindrical transform method enables us to train contemporary classification deep convolutional neural networks (DCNNs) instead of FCNs for semantic segmentation. We applied the proposed method for registration-free segmentation of left kidney, right kidney, and non-kidney data classes in abdominal computed tomography (CT) images by training AlexNet [7] and GoogLeNet [8] DCNNs. We have selected these architectures due to their simplicity of training and relatively high classification performance [9].

In the cylindrical coordinate system, a pixel on the plane z can be represented as (r,θ,z)∈P3, where r∈Z+ is the radial coordinate from the pole along the z-axis and θ∈R+ is the counter-clockwise angular coordinate. It is considered with respect to an axis drawn horizontally from the pole to the right, as illustrated in Figure 1. For a given volume of images, we can select (S′−1)/2 slices, with a given distance of Δs slices, above and under the slice Xz with respect to the pole O such as Ξ=∪(S′−1)/2j=0{z±j⋅Δs|0≤z±j⋅Δs<S}. In the cylindrical coordinate system P3, we can generate K=∪(S′×M)×N−1k=0{(r,θm,z)k} sampling points with respect to a pole O(u,v,z) such that

shows the advantage of using cylindrical transformed images over independent slices of a volume. An sphere and cylinder look different in a 3D space. However, these objects may look similar depending on the object location along the z-axis on the x-y plane. This is while the cylindrical transformed images capture the spatial difference along the z-axis and by combining that with spatial information on the x-y plane, represent a volume along an arbitrary pixel as an image, feasible for machine learning. This image contains information about spatial dependency on the x-y plane as well as the z-axis.

With the approval of the research ethics board, 20 contrast-enhanced normal abdominal CT acquisitions from an equal number of male and female subjects between 25 to 50 years of age were collected [10]. Each acquisition had on average 18 axial slices containing kidneys. The left and the right kidneys were outlined manually by trained personnel and stored as 256×256 images. The boundary delineation was performed using a standard protocol for all kidneys. To avoid inter-rater variability in the dataset, quality of segmentation was assured by two board certified radiologists. The sampling step along the z-axis is Δs=3 and the size of a cylindrical transform generated image is (S′×M)×N=(5×256)×256.

optimizer with a sigmoid decay adaptive learning rate (LR) and momentum term of 0.9 was used. The activation function before the max-pooling layer was a ReLU

and early-stopping (storing network parameters and stopping at maximum validation performance in a window of 5 iterations) was applied. The training datasets were shuffled in each training epoch. The performance results were collected after 10-fold cross-validation.

Using the definition of true positive (TP), false positive (FP), and false negative (FN), the precision P=Tp/(Tp+Fp) and recall R=Tp/(Tp+Fn) measure the success of prediction in classification tasks [13]. The Dice similarity coefficient (DSC) [2] is a well-known measure for the accuracy of segmentation methods [2]. By considering a volume as a set of pixels, for a segmented sequence of images ~X and its corresponding ground-truth ¯X, the DSC is expressed as , where |⋅| is the cardinality of the set. Since we apply the transform to each pixel of the volume X, the DSC segmentation accuracy can be interpreted as the top-1 classification accuracy [14].

In [2], 16,000 original annotated images were used for training a VGG-16 FCN for semantic segmentation of kidneys with a DSC performance of 86%. In our experiments, the focus was on using a limited number of annotated images and considering sequential spatial dependency between images along the z-axis. For the purpose of semantic segmentation, the FCNs require the entire volume of annotated original images (i.e., 126 images) as input for training and inference. However, the cylindrical transform method enables us to train contemporary classification networks for whole-image classification without the need for a FCN to predict dense outputs for semantic segmentation.

shows precision and recall scores of the DCNNs evaluated in Table

1. The receiver operating characteristic (ROC) plots in Figure 5 show the area under curve (AUC) of the classification models trained using cylindrical transformed images, which is 95.00% and 98.66% for AlexNet and GoogLeNet, respectively. The overall performance results show that FCNs are challenging to train with a limited number of training images. These models have achieved less DSC performance comparing to the GoogLeNet, trained with cylindrical transform generated images, that produced a DSC value of 98.40%.

Most of the proposed methods for semantic segmentation of sequential images (i.e., a volume) perform segmentation for each image of the sequence independently, without considering the sequential spatial dependency between the images. In addition, annotating sequential images is challenging and expensive, which is a drawback in using supervised deep learning models due to their need for a massive number of training samples. In this paper, we investigate the semantic segmentation of sequential images in a 3D space by proposing a sampling method in the cylindrical coordinate system. The proposed method can generate images up to the number of pixels in the volume, and therefore augment the training dataset. The generated images contain spatial samples from the x-y plane, as well as the time (i.e., sequential) dimension along the z-axis. This method enables us to train contemporary classification convolutional neural networks instead of a fully convolutional network (FCN). This technique helps the network to avoid overfitting and boost up its generalization performance.