Cyborg Systems as Platforms for Computer-Vision Algorithm-Development for Astrobiology

Employing the allegorical imagery from the film "The Matrix", we motivate and discuss our `Cyborg Astrobiologist' research program. In this research program, we are using a wearable computer and video camcorder in order to test and train a computer-vision system to be a field-geologist and field-astrobiologist. 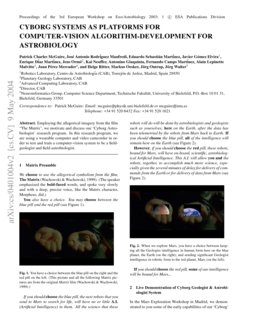 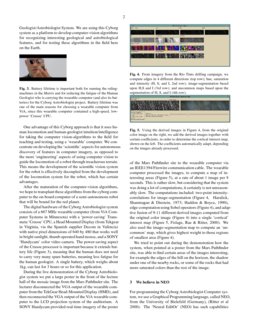 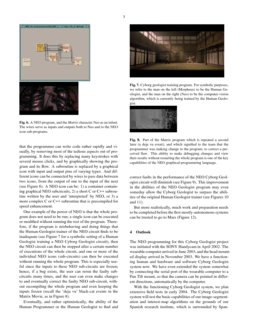 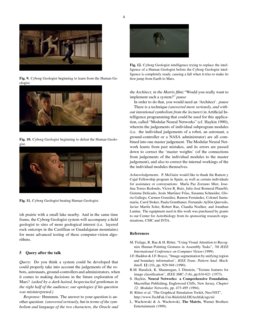 We choose to use the allegorical symbolism from the film, The Matrix (Wachowski & Wachowski, 1999). (The speaker emphasized the bold-faced words, and spoke very slowly and with a deep, precise voice, like the Matrix character, Morpheus, did.)

You also have a choice. You may choose between the blue pill and the red pill (see Figure 1).

If you should choose the blue pill, the next robots that you send to Mars to search for life, will have no or little A.I.

(Artificial Intelligence) in them. All the science that these robots will do will be done by astrobiologists and geologists such as yourselves,

here on the Earth, after the data has been telemetried by the robots from Mars back to Earth. If you should choose the blue pill, all of the intelligence will remain here on the Earth (see Figure 2).

However, if you should choose the red pill, these robots, bound for Mars, will have on-board, scientific, astrobiological Artificial Intelligence. This A.I. will allow you and the robots, together, to accomplish much more science, especially given the several minutes of delay for delivery of commands from the Earth or for delivery of data from Mars (see Figure 2).

If you should choose the red pill, some of our intelligence will be bound for Mars…

In the Mars Exploration Workshop in Madrid, we demonstrated to you some of the early capabilities of our ‘Cyborg’ Geologist/Astrobiologist System. We are using this Cyborg system as a platform to develop computer-vision algorithms for recognizing interesting geological and astrobiological features, and for testing these algorithms in the field here on the Earth.

One advantage of this Cyborg approach is that it uses human locomotion and human-geologist intuition/intelligence for taking the computer vision-algorithms to the field for teaching and testing, using a ‘wearable’ computer. We concentrate on developing the ‘scientific’ aspects for autonomous discovery of features in computer imagery, as opposed to the more ‘engineering’ aspects of using computer vision to guide the locomotion of a robot through treacherous terrain. This means the development of the scientific vision system for the robot is effectively decoupled from the development of the locomotion system for the robot, which has certain advantages.

After the maturation of the computer-vision algorithms, we hope to transplant these algorithms from the cyborg computer to the on-board computer of a semi-autonomous robot that will be bound for the red planet.

The digital hardware of the Cyborg Astrobiologist system consists of a 667 MHz wearable computer (from ViA Computer Systems in Minnesota) with a ‘power-saving’ Transmeta ‘Crusoe’ CPU, a Head Mounted Display (from Tekgear in Virginia, via the Spanish supplier Decom in València) with native pixel dimensions of 640 by 480 that works well in bright sunlight, thumb operated hand mouse, and a SONY ‘Handycam’ color video camera. The power-saving aspect of the Crusoe processor is important because it extends battery life (Figure 3), meaning that the human does not need to carry very many spare batteries, meaning less fatigue for the human geologist. A single battery, which weighs about 1kg, can last for 3 hours or so for this application.

During the live demonstration of the Cyborg Astrobiologist system we put a large poster in the front of the lecture hall of the mosaic image from the Mars Pathfinder site. The lecturer disconnected the VGA output of the wearable computer from the TekGear Head-Mounted Display (HMD), and then reconnected the VGA output of the ViA wearable computer to the LCD projection system of the auditorium. A SONY Handycam provided real-time imagery of the poster of the Mars Pathfinder site to the wearable computer via an IEEE1394/Firewire communication cable. The wearable computer processed the images, to compute a map of interesting areas (Figure 5), at a rate of about 1 image per 8 seconds. This is rather slow, but considering that the system was doing a lot of computations, it certainly is not unreasonably slow. The computations included: two-point intensity-correlations for image-segmentation (Figure 4,   Haralick, Shanmugan & Dinstein, 1973; Haddon & Boyce, 1990), edge-computation using Sobel operators (Figure 4), and adaptive fusion of 9-11 different derived images computed from the original color image (Figure 4) into a single ‘cortical’ interest map (Figure 5, Fislage, Rae & Ritter, 2000). We also used the image-segmentation map to compute an ‘uncommon’ map, which gives highest weight to those regions of smallest area (Figure 4).

We tried to point out during the demonstration how the system, when pointed at a poster from the Mars Pathfinder site, was able to find certain areas of the images interesting, for example the edges of the hill on the horizon, the shadow under one of the nearby rocks, or some of the rocks that had more saturated colors than the rest of the image.

3 We believe in NEO

For programming the Cyborg Astrobiologist Computer system, we use a Graphical Programming language, called NEO, from the University of Bielefeld (Germany), (Ritter et al 2000). The ‘Neural EditOr’ (NEO) has such capabilities that the programmer can write code rather rapidly and visually, by removing most of the tedious aspects out of programming. It does this by replacing many keystrokes with several mouse clicks, and by graphically showing the program and its flow. A subroutine is replaced by a graphical icon with input and output pins of varying types. And different icons can be connected by wires to pass data between two icons, from the output of one to the input of the next (see Figure 6). A NEO icon can be: 1) a container containing graphical NEO subcircuits, 2) a short C or C++ subroutine written by the user and ‘interpreted’ by NEO, or 3) a more complex C or C++ subroutine that is precompiled for speed enhancement.

One example of the power of NEO is that the whole program does not need to be run; a single icon can be executed or modified without running the rest of the program. Therefore, if the program is misbehaving and doing things that the Human-Geologist trainer of the NEO circuit finds to be inadequate (see Figure 7 for a symbolic setting of a Human Geologist training a NEO Cyborg Geologist circuit), then the NEO circuit can then be stopped after a certain number of executions of the whole circuit, and one or more of the individual NEO icons (sub-circuits) can then be executed without running the whole program. This is especially useful since the inputs to these NEO sub-circuits are frozen; hence, if a bug exists, the user can rerun the faulty sub-circuits many times, and the user can even make changes to and eventually correct the faulty NEO sub-circuit, without recompiling the whole program and even keeping the inputs frozen (recall the ‘deja vu’ black-cat events in the Matrix Movie, as in Figure 8).

But more realistically, much work and preparation needs to be completed before the first mostly-autonomous systems can be trusted to go to Mars (Figure 12).

The NEO programming for this Cyborg Geologist project was initiated with the SONY Handycam in April 2002. The wearable computer arrived in June 2003, and the head mounted display arrived in November 2003. We have a functioning human and hardware and software Cyborg Geologist system now. We have even extended the system somewhat by connecting the serial port of the wearable computer to a Pan Tilt mount, so that the camera can be pointed in different directions, automatically by the computer.

5 Query after the talk

Query: Do you think a system could be developed that could properly take into account the judgements of the robots, astronauts, ground-controllers and administrators, when it comes to making decisions in the future exploration of Mars? (asked by a dark-haired, bespectacled gentleman in the right half of the audience; our apologies if his question was misinterpreted.)

Response: Hmmmm. The answer to your question is another question: (answered seriously, but in terms of the symbolism and language of the two characters, the Oracle and the Architect, in the Matrix film) “Would you really want to implement such a system?” pause

In order to do that, you would need an ‘Architect’. pause

There is a technique (answered more seriously, and without intentional symbolism from the lecturer)