In our previous work, we introduced the random k-cut number for rooted graphs. In this paper, we show that the distribution of the k-cut number in complete binary trees of size n, after rescaling, is asymptotically a periodic function of n - n. Thus there are different limit distributions for different subsequences, where these limits are similar to weakly 1-stable distributions. This generalizes the result for the case k = 1, i.e., the traditional cutting model, by Janson. 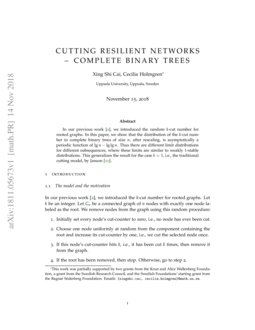 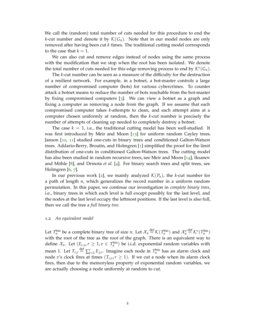 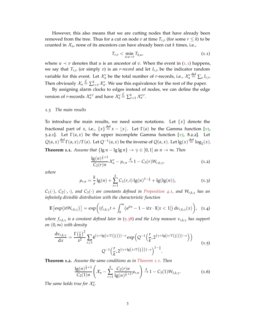 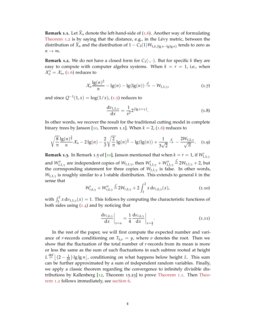 1.1 The model and the motivation

In our previous work [Cai010], we introduced the k-cut number for rooted graphs. Let k be an integer. Let Gn be a connected graph of n nodes with exactly one node labeled as the root. We remove nodes from the graph using this random procedure:

We call the (random) total number of cuts needed for this procedure to end the k-cut number and denote it by K(Gn). Note that in our model nodes are only removed after having been cut k times. The traditional cutting model corresponds to the case that k=1.

We can also cut and remove edges instead of nodes using the same process with the modification that we stop when the root has been isolated. We denote the total number of cuts needed for this edge removing process to end by Ke(Gn).

The k-cut number can be seen as a measure of the difficulty for the destruction of a resilient network. For example, in a botnet, a bot-master controls a large number of compromised computer (bots) for various cybercrimes. To counter attack a botnet means to reduce the number of bots reachable from the bot-master by fixing compromised computers [4413000]. We can view a botnet as a graph and fixing a computer as removing a node from the graph. If we assume that each compromised computer takes k-attempts to clean, and each attempt aims at a computer chosen uniformly at random, then the k-cut number is precisely the number of attempts of cleaning up needed to completely destroy a botnet.

The case k=1, i.e., the traditional cutting model has been well-studied. It was first introduced by meir70 for uniform random Cayley trees. janson04, janson06 studied one-cuts in binary trees and conditioned Galton-Watson trees. ab14 simplified the proof for the limit distribution of one-cuts in conditioned Galton-Watson trees. The cutting model has also been studied in random recursive trees, see meir74, iksanov07, and drmota09. For binary search trees and split trees, see holmgren10, holmgren11.

In our previous work [Cai010], we mainly analyzed K(Pn), the k-cut number for a path of length n, which generalizes the record number in a uniform random permutation. In this paper, we continue our investigation in complete binary trees, i.e., binary trees in which each level is full except possibly for the last level, and the nodes at the last level occupy the leftmost positions. If the last level is also full, then we call the tree a full binary tree.

Let Tbinn be a complete binary tree of size n. Let Xndef=K(Tbinn) and Xendef=Ke(Tbinn) with the root of the tree as the root of the graph. There is an equivalent way to define Xn. Let (Er,v,r≥1,v∈Tbinn)

1. Let Tr,vdef=∑rj=1Ej,v. Imagine each node in Tbinn has an alarm clock and node v’s clock fires at times (Tr,v,r≥1). If we cut a node when its alarm clock fires, then due to the memoryless property of exponential random variables, we are actually choosing a node uniformly at random to cut.

However, this also means that we are cutting nodes that have already been removed from the tree. Thus for a cut on node v at time Tr,v (for some r≤k) to be counted in Xn, none of its ancestors can have already been cut k times, i.e.,

where u≺v denotes that u is an ancestor of v. When the event in (1.1) happens, we say that Tr,v (or simply v) is an r-record and let Ir,v

be the indicator random variable for this event. Let

Xrn be the total number of r-records, i.e., Xrndef=∑vIr,v. Then obviously XnL=∑kr=1Xrn. We use this equivalence for the rest of the paper.

By assigning alarm clocks to edges instead of nodes, we can define the edge version of r-records Xe,rn and have XenL=∑kr=1Xe,rn.

has an infinitely divisible distribution with the characteristic function

Assume the same conditions as in Theorem 1.1. Then

The same holds true for Xen.

In other words, we recover the result for the traditional cutting model in complete binary trees by [Theorem 1.1]janson04. When k=2, (1.6) reduces to

with ∫21xdν1,1,γ(x)=1. This follows by computing the characteristic functions of both sides using (1.4) and by noticing that

In the rest of the paper, we will first compute the expected number and variance of

r-records conditioning on Tk,o=y, where o denotes the root. Then we show that the fluctuation of the total number of r-records from its mean is more or less the same as the sum of such fluctuations in each subtree rooted at height , conditioning on what happens below height L. This sum can be further approximated by a sum of independent random variables. Finally, we apply a classic theorem regarding the convergence to infinitely divisible distributions by [Theorem 15.23]kallenberg02 to prove Theorem 1.1. Then Theorem 1.2 follows immediately, see section 6.

The proof follows a similar path as janson04 did for the case k=1. However, the analysis for k≥2 is significantly more complicated.

holmgren10, holmgren11 showed that when k=1, Xn has similar behavior in binary search trees and split trees as in complete binary trees. We are currently trying to prove this for k≥2.

We collect some of the notations which are used frequently in this paper.

For node v∈Tbinn, let h(v) be the height of v, i.e., the distance (number of edges) between v and the root, which we denote by o.

Let Xrn,y be Xrn−1 conditioned on Tk,o=y, i.e., the number of r-record, excluding the root, conditioned on that the root is removed (cut the k-th time) at time y.

For functions f:A→R and g:A→R, we write uniformly on B⊆A to indicate that there exists a constant C0 such that |f(a)|≤C0|g(a)| for all a∈B. The word uniformly stresses that C0 does not depend on a.

We use the notation and in the usual sense, see [janson11].

The notations C1(⋯),C2(⋯),… denote constants that depend on k and other parameters but do not depend on n.

3 The expectation and the variance

uniformly for all , where .

We do not have a closed form for the constants C5(j,b). However, for fixed k, they are easy to find with computer algebra systems. For example, when k=1, (3.1) reduces to

where the implicit constants C6(j,b) are defined in the proof.

Again, although we do not have closed forms for the constants C6(j,b), they are not difficult to compute with computer algebra systems. For example, for k=1, we have C6(1,2)=0. For k=2, we have

Let v be a node of height i. For v to be an r-record, conditioning on Tk,o=y, we need Tr,v<y and Tk,u>Tr,v for every u that is an ancestor of v. Recall that Tr,vdef=∑rj=1Ej,v, where Ej,v are i.i.d. exponential 1 random variables. Thus Tk,u are i.i.d. Gamma(k,1) random variables and Tr,v is a Gamma(r,1) random variable, which are independent from everything else. (See Theorem 2.1.12 of [durrett10]

The Gamma distribution Gamma(r,1) has the density function

When the tree is full, each level i has 2i nodes. Thus in this case

Note that this differs from (3.12) only by the constant in the term xk/k!. Thus the first equality in (3.14) follows as in Lemma 3.2. The second equality follows by keeping only the main term of ψr(m,y,1). ∎

The next lemma computes EXrn,y when the tree is not full. The reason why it is formulated in terms of ¯¯¯¯¯m will be clear in the proof of Lemma 4.2.

. When the tree is not necessarily full, the estimate of

The only other possible case is that ¯¯¯¯¯m=m+1 and the tree is full. The result follows easily by adding an extra node v at height ¯¯¯¯¯m, computing the total expectation of r-records for this tree by the case already studied, and subtracting from (3.14). ∎

The general case can be solved similarly. Consider a binary tree, with the right subtree of the root being Tbinn (possibly not full), and the left subtree of the root being Tbin2m+1−1, i.e., a full binary tree of height m. This tree has size n′′=n+2m+1. Thus φr(n′′,∞) is the expected number of r-records in Tbinn, plus the expected number of r-record in Tbin2m+1−1, which is φ(n′,∞)/2 by the previous paragraph. Thus

Consider two nodes, v and w of heights s and t respectively. Let u be the node that is furthest away from the root among the common ancestor of v and w. Let i=h(u).

Note that conditioning on Tk,o=y and Z=z, the events that v is an r-record and that w is an r-record are independent. Thus by Lemma 3.3 and the assumption that (v,w) is good,

On the other hand, again by Lemma 3.3 and the assumption that (v,w) is good,

Therefore, by the definition of ψ∗r(a,w) in (3.15), the first order term of the above is

Canceling other terms in (3.27) in a similar way shows that

The number of bad pairs is at most

as the lemma claims. ∎

Recall that . Let (vi,1≤i≤2L) be the 2L nodes of height L. Let Yi be the minimum of the Tk,v for all nodes v on the path between the root and vi.

The proof uses the estimate of the variance in Lemma 3.5 and exactly the same argument of Lemma 2.3 in [janson04]. We omit the details. ∎

4 Transformation into a triangular array

In this section, we prove Proposition 4.1, which shows that Xrn, properly rescaled and shifted, can be written as a sum of independent random variables. Three technical lemmas Lemma 4.1, Lemma 4.2, Lemma 4.3 are needed first.

Recall that Y1 has the distribution of the minimum of L+1 independent Gamma(k,1) random variables. Let ^mdef=m−L. Let a>0 be a constant. Then

the density of Y1 is

by the derivative formula

Substituting the above inequality into (4.14) and integrating gives (4.5).

The next two lemmas first remove the ¯¯¯¯¯m (see Lemma 3.4) hidden in the representation (3.35) then transform it into a sum of independent random variables.

Let ni be the size of the subtree rooted at vi. Then

We now convert this into an expression in m. Let

The first term of the above expression is

since . The terms which do not contain Yi can be bounded similarly. For terms involving Yi, we can use Lemma 4.1. For example, by (4.6), the second term is

In the end, it follows from Lemma 4.1 and simple asymptotic computations that

from which (4.18) follows immediately. ∎

Let nv be the size of the subtree rooted at the node v. Then

Recall that Yi is the minimum of L+1 independent Gamma(k,1) random variables (Tk,v,v∈P(vi)), where P(vi) denotes the path from the root o to vi. Let

. The probability that at least two

Tk,v are less than a is

With probability goes to 1, there is at most one Tk,v that is less than a on each path P(vi). When this happens, by the inequality (4.10),

5 Convergence of the triangular array

Let , which are deterministic. It follows from Lemma 5.1 that we can apply Theorem 15.28 in [kallenberg02] with a=0, b=fr,k,γ to show that the triangular array ∑h(v)≤Lξr,v+∑ni=1ξ′i converges in distribution to Wr,k,γ (defined in Theorem 1.1). Thus by Proposition 4.1, Theorem 1.1 follows immediately.

Therefore this probability tends to zero for all fixed x.

and that the number of bad nodes is .

Using the derivative formula (4.9), one can verify that

be the probability density function of

Using again the derivative formula (4.9), one can verify that

So we distinguish three cases, l/2≤t≤l, l<t<L, and t=L, which we refer to as the low part, the high part, and the last part.