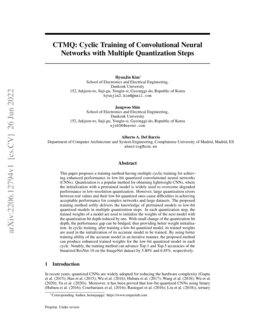 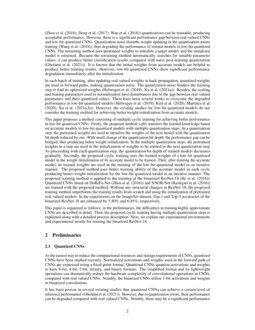 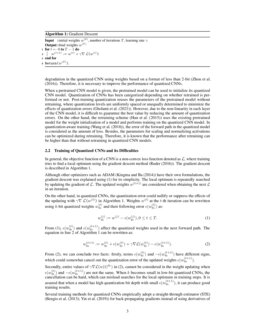 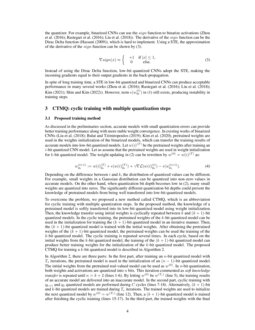 Towards Accurate Quantization and Pruning via Data-free Knowledge Transfer

An Underexplored Dilemma between Confidence and Calibration in Quantized Neural Networks

Where Should We Begin? A Low-Level Exploration of Weight Initialization Impact on Quantized Behaviour of Deep Neural Networks

In each batch of training, after updating real-valued weights in back-propagation, quantized weights are used in forward paths, making quantization noise. The quantization noise hinders the training step to find its optimized weights (Helwegen et al. (2019); Xu et al. (2021a)). Besides, the scaling and biasing parameters used in normalization have disturbances due to the gap between real-valued parameters and their quantized values. There have been several works to overcome the degraded performance in low-bit quantized models (Helwegen et al. (2019); Kim et al. (2020); Martinez et al. (2020); Xu et al. (2021a, b)). However, the existing studies for low-bit quantized models do not consider the training method for achieving better weight initialization from accurate models.

Rastegari et al. (2016)) are trained with the proposed method. Without any structural changes in ResNet-18, the proposed training method outperforms the training results from scratch and using the initialization of pretrained real-valued models. In the experiments on the ImageNet dataset, Top-1 and Top-5 accuracies of the binarized ResNet-18 are enhanced by 5.80% and 6.85%, respectively.

This paper is organized as follows: in the preliminaries, the difficulties in training highly approximate CNNs are described in detail. Then, the proposed cyclic training having multiple quantization steps is explained along with a detailed process description. Next, we explain our experimental environments and experimental results for training the binarized ResNet-18.

It has been proven in several existing studies that quantized CNNs can achieve a certain level of inference performance (Gholami et al. (2021)). However, due to quantization errors, their performance can be degraded compared with real-valued CNNs. Notably, there may be a significant performance degradation in the quantized CNN using weights based on a format of less than 2-bit (Zhou et al. (2016)). Therefore, it is necessary to improve the performance of quantized CNNs.

2.2 Training of Quantized CNNs and its Difficulties

In general, the objective function of a CNN is a non-convex loss function denoted as

Although other optimizers such as ADAM (Kingma and Ba (2014)) have their own formulations, the gradient descent was explained using (1) for its simplicity. The local optimum is repeatedly searched by updating the gradient of L. The updated weights w(t+1) are considered when obtaining the next L in an iteration.

On the other hand, in quantized CNNs, the quantization error could nullify or suppress the effects of the updating with γ∇ L(w(t)) in Algorithm 1. Weights w(t) at the t-th iteration can be rewritten using k-bit quantized weights w(t)qk and their following error ϵ(w(t)qk) as:

From (1), ϵ(w(t)qk) and ϵ(w(t+1)qk) affect the quantized weights used in the next forward path. The equation in line 2 of Algorithm 1 can be rewritten as:

From (2), we can conclude two facts: firstly, terms ϵ(w(t)qk) and −ϵ(w(t+1)qk) have different signs, which could somewhat cancel out the quantization error of the updated weights ϵ(w(t+1)qk).

Secondly, entire values of γ∇L(w(t)qk) in (2), cannot be considered in the weight updating when ϵ(w(t)qk) and −ϵ(w(t+1)qk) are not the same. When k becomes small in low-bit quantized CNNs, the cancellation can be hard, which can mislead searches for the local optimum in training steps. It is assured that when a model has high quantization bit depth with small ϵ(w(t+1)qk), it can produce good training results.

Instead of using the Dirac Delta function, low-bit quantized CNNs adopt the STE, making the incoming gradients equal to their output gradients in the back-propagation.

As discussed in the preliminaries section, accurate models with small quantization errors can provide better training performance along with more stable weight convergence. In existing works of binarized CNNs (Liu et al. (2018); Bulat and Tzimiropoulos (2019); Kim et al. (2020), pretrained weights are used in the weights initialization of the binarized models, which can transfer the training results of accurate models into low-bit quantized models. Let w(i)(T) be the pretrained weights after training an i-bit quantized CNN model. Let us assume that the pretrained weights are used in weight initialization for k-bit quantized model. The weight updating in (2) can be rewritten by w(0)=w(i)(T) as:

Depending on the difference between i and k

, the distribution of quantized values can be different. For example, small weights in a Gaussian distribution can be quantized into non-zero values in accurate models. On the other hand, when quantization bit depth becomes low in (

2), many small weights are quantized into zeros. The significantly different quantization bit depths could prevent the knowledge of pretrained models from being well transferred into low-bit quantized models.

In the multiple quantization steps of the proposed method, we adopts the quantization scheme shown in DoReFa-Net (Zhou et al. (2016)) for quantizing weights and activations, which is summarized in the following. It is noted that the proposed training cannot depend on any specific quantization method.

Except for binarized weights, weights w are normalized into wnorm for obtaining k-bit quantized weights as:

Terms tanh and abs mean the hyperbolic tangent and absolute functions, respectively. Notably, tanh function is used to limit the value range. Then, normalized weights wnorm are quantized into wqk as:

Besides, binarized weights can be obtained using the sign function as:

On the other hand, k-bit quantized activations denoted as xqk are obtained as:

In (8), term clamp(x,0,1) denotes the clamp function to limit x to the range [0,1]. Unlike the 1-bit quantized weights, the proposed method does not use the sign function for 1-bit quantized activations. Therefore, xq1 can be 0 or 1.

In experiments, existing binarized CNN models were trained to evaluate the proposed method on the training of low-bit quantized CNNs. Binarized CNNs adopted 1-bit weights and activations in the convolutions so that significant computational and storage resources can be saved. However, the performance degradation of binarized CNNs has been the most critical issue (Qin et al. (2020)). It is expected that the proposed method can solve this problem by achieving high classification accuracy. The pyramid structure with highly stacked convolution layers and residual shortcuts have been adopted in many studies of binarized CNNs (Rastegari et al. (2016); Lin et al. (2017); Liu et al. (2018); Bulat and Tzimiropoulos (2019); Phan et al. (2020); Liu et al. (2020); Kim (2021); Xu et al. (2021a); Shin and Kim (2022)). Considering the popularity of the residual binarized networks, our experiments adopted a residual CNN model called ResNet-18 He et al. (2016)

Krizhevsky et al. (2009))) and ImageNet (Russakovsky et al. (2015))) were in the evaluations. ResNet-18 was quantized for achieving the final trained model with binarized (1-bit) weights and activations. For fair comparison, we adopted the quantization scheme in Zhou et al. (2016). Besides, we maintained the structure of basic blocks in DoReFa-Net (Zhou et al. (2016)) and XNOR-Net (Rastegari et al. (2016) in the experiments.

Paszke et al. (2019)). We coded our training script that supported multiple GPU-based data parallelism. After finishing training, its real-valued trained model was stored in a file with pth extension. As shown in Algorithm 2, the file having pretrained weights was loaded for the initialization used in the next training. The above process was repeated in the proposed cyclic training using shell scripts. It must be noted that quantizations were not implemented in silicon-based hardware circuits. Instead, quantizers were coded as functions to emulate the quantizations of weights and activations in the forward path.

The summary of target datasets is as follows: the CIFAR-100 dataset consists of 60K 32×32 colour images with 100 classes, where each class contains 500 training and 100 test images. For the data augmentation during training, 32×32 input images were randomly cropped and flipped from 40×40padded images. The ImageNet dataset contains 1.3M training and 50K validation images with 1K classes. During training on the ImageNet dataset, images were randomly resized between 256 and 480 pixels, and then randomly cropped and flipped into 224×224 images. In inference, we adopted 224×224 center-cropped images without data augmentations from the validation dataset.

Figure 1 describes the structure of ResNet-18 for the ImageNet dataset. The layers have 5 groups from Conv-1 to Conv-5, where the convolutional layer in a group has the same number of output channels. Firstly, 3 channels from RGB coloured image are used as 7×7 convolutional layer with stride=2 (Conv-1). With stride=2

, the width and height of output features are reduced to half. After the max pooling with

features. After performing fully-connected and softmax layers, the final classification results can be obtained. If the quantization is adopted in the first convolution layer of Conv-1, the original

). The learnable mean and variance were used to scale and shift the normalized activations. In the two convolutional layers and downsampling,

4.3 Training on CIFAR-100 and ImageNet datasets

Training on the CIFAR-100 dataset used ADAM optimizer (Kingma and Ba (2014)) having β1=0.9&β2=0.999 without weight decay. When training a k-bit quantized model during Eepochsepochs, the base learning rate lrbase was set as 0.001. The learning rate lr was decayed based on poly policy in the eepochs-th epoch, limiting the maximum learning rate of the ADAM optimizer by lrbase×(1−eepochs/Eepochs). After finishing the training of an n-bit quantized model, lrbase of the next training was reset as 0.001.

Several hyperparameters used in the training on the ImageNet dataset were the same as those on the CIFAR-100 dataset. Besides,

Table 1 lists the comparison in terms of inference accuracies. The proposed training method was evaluated based on the average of five runs. The accuracies of ResNet-18 and XNOR-Net in Table 1 were referenced from Torch (2022) and Rastegari et al. (2016). There were no published results on the quantized ResNet-18 on the CIFAR-100 dataset in Zhou et al. (2016) and Rastegari et al. (2016) so that we trained the quantized models during 200 epochs on the CIFAR-100 dataset and 50 epochs on the ImageNet dataset for the counterparts without applying the proposed method. In the training of the counterparts, most of the hyperparameters were identical with those using the proposed method. However, weight decay was set as 0.0001 for the regularization. In Table 1, when the initialization was Y, real-valued pretrained models were used in weight initialization. Besides, when item CTMQ was N, the soft knowledge transfer and cyclic training were not applied.

Due to the small number of training images and small image size in the CIFAR-100 dataset, overfitting was shown in the experiments of ResNet-18. Therefore, the enhancements with the proposed method were limited in the experiments on the CIFAR-100 dataset. On the other hand, the proposed method significantly enhanced the final inference accuracies on the ImageNet dataset compared with other cases. On the ImageNet dataset, when not using the proposed method, TypeI with initialization showed significant performance drop only having 42.38% Top-1 and 67.91% Top-5 inference accuracies. TypeI using the proposed CTMQ achieved 51.54% Top-1 and 76.15% Top-5 accuracies, which produced better performance over the original XNOR-Net Rastegari et al. (2016). The binarized ResNet-18 with TypeII had Top-1 and Top-5 inference accuracies up to 57.0% and 80.05%, respectively, which showed 5.80% and 6.85% enhancements over the training results of the original XNOR-Net.

Considering the experimental results, it is concluded that the proposed training method was effective for training complex residual networks on large dataset.

We focus on a new training method performing cyclic training with different k-bit quantizations. The training method performs multiple cyclic training for softly delivering the knowledge of pretrained accurate models and using better training ability of accurate networks. Although the number of training epochs increases during three training parts, it has been proven that the final inference accuracies for complex residual networks on large dataset are significantly enhanced in experimental results. It is noted that there are no structural changes in CNNs for enhancing the final inference accuracy. Although several binarized CNNs are trained in experiments, the proposed method can be applied to other quantized CNNs based on the existing quantization and optimizer. Notably, the training method can advance Top-1 and Top-5 accuracies of the binarized ResNet-18 on the ImageNet dataset by 5.80% and 6.85%, respectively. Considering the enhanced classification outputs, it is concluded that the proposed cyclic training method is useful for producing high-performance systems in quantized CNNs.