ITRU cryptosystem is a public key cryptosystem and one of the known variants of NTRU cryptosystem. Instead of working in a truncated polynomial ring, ITRU cryptosystem is based on the ring of integers. The authors claimed that ITRU has better features comparing to the classical NTRU, such as having a simple parameter selection algorithm, invertibility, and successful message decryption, and better security. In this paper, we present an attack technique against the ITRU cryptosystem, and it is mainly based on a simple frequency analysis on the letters of ciphertexts. 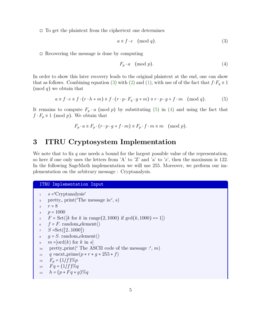 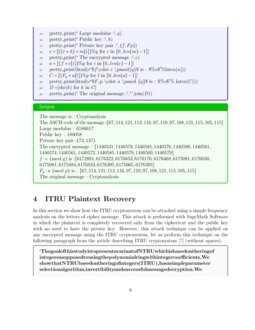 Lord of the Ring(s): Side Channel Attacks on the CPU On-Chip Ring Interconnect Are Practical

Indeed, it has very good features comparing to other public key cryptosystems such as reasonably short, easily created keys, high speed, and low memory requirements. Its encryption and decryption procedures rely on a mixing system presented by polynomial algebra combined with a clustering principle based on elementary probability theory. From its lattice-based structure, the security of the NTRU cryptosystem is based on the hardness of solving the Closest Vector Problem (CVP), which is a computational problem on lattices closely related to Shortest Vector Problem (SVP) and considered to be NP hard (non-deterministic polynomial-time hardness) (for more details, see

However, the inventors of NTRU cryptosystem ensured that it is extremely unlikely to several potential attacks against the scheme to succeed ( particularly, the standard lattice-based attack ) since the secret key was surrounded by a“cloud” of exponentially many unrelated lattice vectors. Later, in 2001 Coppersmith and Shamir [4] showed that the security of NTRU cryptosystem is not necessarily based on the difficulty of reducing the NTRU lattice since the lattice reduction can be one of the practical attacks against NTRU cryptosystem. In fact, they presented a lattice-based attack, which can either find the original secret key k or an alternative key k′ which can be used instead of k to obtain the plaintexts by decrypting the corresponding ciphertexts with only slightly higher computational complexity. After that, many types of lattice-based attacks on the NTRU cryptosystem and its variants have been occurred. It is important to mention that all of these attacks have focused primarily on the “secret key recovery” problem. For instance, Gentry [8] proposed lattice-based attacks that are especially effective when N, in the polynomial ring that used in the classical NTRU cryptosystem, is composite. He used low-dimensional lattices to find a folded version of the private key, where this key has d coefficients where d dividing N. This folded private key is used to recover a folding of the plaintext, or it helps to recover the original private key.

However, a chosen ciphertext attack is another type of attacks, which was already used in [9] or [14] against other public key cryptosystems. Here, the attacker constructs invalid cipher messages. By knowing the plaintexts corresponding to his messages, she can get some information about the private key or even recover it. Such an attack was used against the NTRU cryptosystem by Jaulmes and Joux [13]. Similar attack to the later one was proposed by Meskanen and Renvalla [23].

Another attack on NTRU cryptosystem hardware implementations, that employ scan based Design-for-Test (DFT) techniques, was proposed by Kamal and Youssef [15], and they called it a scan-based side channel attack. This attack determines the scan chain structure of the polynomial multiplication circuits used in the decryption algorithm which allows the cryptanalyst to efficiently retrieve the secret key.

In fact, most of the attacks against the NTRU cryptosystem especially the ones mentioned above focus primarily on the “secret key recovery” problem. Therefore, in this paper we present a new attack technique to break the ITRU cryptosystem proposed in [7]. Since the ITRU cryptosystem is a substitution cipher, so our attack is mainly based on a simple frequency analysis on the letters of ciphertexts using a function implemented in SageMath [37] as frequency_distribution(). As a result, this techniques will recover the corresponding plaintexts immediately with no need of having the private keys.

In order to show this later recovery leads to the original plaintext at the end, one can show that as follows. Combining equation (3) with (2) and (1), with use of of the fact that f⋅Fq≡1(modq) we obtain that

It remains to compute Fp⋅a(modp) by substituting (5) in (4) and using the fact that f⋅Fp≡1(modp). We obtain that

We note that to fix q one needs a bound for the largest possible value of the representation, so here if one only uses the letters from ’A’ to ’Z’ and ’a’ to ’z’, then the maximum is 122. In the following SageMath implementation we will use 255. Moreover, we preform our implementation on the arbitrary message : Cryptanalysis.

In this section we show how the ITRU cryptosystem can be attacked using a simple frequency analysis on the letters of cipher message. This attack is preformed with SageMath Software in which the plaintext is completely recovered only from the ciphertext and the public key with no need to have the private key. However, this attack technique can be applied on any encrypted message using the ITRU cryptosystem, let us preform this technique on the following paragraph from the article describing ITRU cryptosystem [7] (without spaces):

If this paragraph is encrypted with the large modulus q=1104427 and the public key h=37619, then the ciphertext starts as

In fact, there are 32 different numbers appearing in the ciphertext these are between 300992 and 301073. A simple frequency analysis with the function frequency_distribution() provides the following data:

where ci represents the ciphertext blocks in the ASCII character code for all i. Thus, we get a sequence of numbers starting with

Finally, if we consider it as a sequence of ASCII codes and determine the corresponding plaintext, then we get the encoded message.

The research was supported in part by grants K115479 and K128088 (Sz.T.) of the Hungarian National Foundation for Scientific Research. The work of H. R. Hashim was supported by the Stipendium Hungaricum Scholarship.