Cryptanalysis of a Chaotic Image Encryption Algorithm Based on Information Entropy

Recently, a chaotic image encryption algorithm based on information entropy (IEAIE) was proposed. This paper scrutinizes security properties of the algorithm and evaluates validity of the used quantifiable security metrics. Some common insecurity problems in the field of chaotic image encryption are found in IEAIE, e.g. the short orbits of digital chaotic system and invalid sensitivity mechanism built on information entropy of the plain-image. What's worse, each security metric is obviously questionable, undermining the security credibility of IEAIE. So, IEAIE can only serve as a counterexample for the secure and effective communication method for image data. 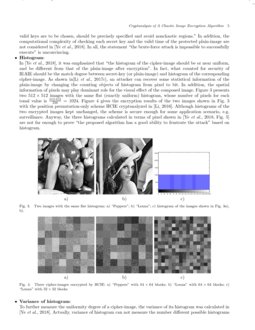 In this paper, a novel image encryption algorithm, which involves a chao...
Osama A. S. Alkishriwo, et al. ∙

Today, the protection of information, ensuring of the safety and the rec...
Nurettin Topaloglu, et al. ∙

One of the most important and practical researches which has been consid...
R. Parvaz, et al. ∙

Combined Image Encryption and Steganography Algorithm in the Spatial Domain

In recent years, steganography has emerged as one of the main research a...
Aya H. S. Abdelgader, et al. ∙

Image encryption based on flexible computing of chaotic systems

With the popularity of imaging sensors in smartphones and various video recording scenarios, e.g. dashboard camera and closed-circuit television (CCTV), a vast volume of multimedia data are recorded every day [1, 2]. Meanwhile, the fast network transmission technique allows them to be transmitted among cloud servers, social media platforms, and personal cellphones with ever-growing speed and scope. Once a multimedia file containing some personal privacy information leaves the original control scope, they may threaten the owner and the related persons very quickly. So, the security and privacy of multimedia data have become the concerns of everyone living in the cyberspace. To respond to such a challenge, a large number of multimedia privacy protections and preservation schemes were proposed in the past two decades [3, 4].

One of the well-known features of chaos is the so-called butterfly effect: if a butterfly flips its wings in Brazil, tomorrow Texas, USA will have a storm. In a more scientific term, we say a system is very sensitive to the initial condition, i.e., a small change at the very beginning will eventually lead to a completely different result. This implies unpredictability because an accurate measurement of the initial condition is in principle impossible. As the sensitivity and unpredictability are some good features we want to have in applications like secure communications and (pseudo-) random number generation, many researchers around the world have tried to apply chaos to build various cryptographic primitives: permutation relation [5], pseudo-random number generator [6, 7], hash function [8], private-key encryption scheme [9, 10], public-key encryption scheme [11], authentication [4], secure communication based on synchronization [12], secret-key share (agreement) algorithm [13], data hiding [14], and privacy protection [15]. The main objective of chaotic cryptanalysis is to disclose the information about the secret key of a chaotic encryption (or secure communication) scheme under all kinds of security models: ciphertext-only attack [5], known-plaintext attack [16, 17], chosen-plaintext attack [18, 19], chosen-ciphertext attack [20], and impossible differential attack [21]. Meanwhile, chaotic cryptanalysis also provides a novel perspective to study the dynamical properties of the underlying chaotic system. As degradation of any chaotic system definitely happens in a digital domain [22, 23], a chaos-based encryption scheme may own some special security defects that do not exist in the non-chaotic encryption schemes [24, 25, 26].

In [27], a chaotic image encryption algorithm was proposed using information entropy value calculated from the plain-image, which is named as IEAIE in this paper. In the algorithm, a pseudo-random number sequence generated by the two-dimensional Logistic-adjusted-Sine map (2D-LASM) proposed in [6] is used to control a combination of some basic operations, including position permutation and modulo addition. Especially, the information entropy of the plain-image is used to build up a sensitivity mechanism of the encryption result of IEAIE on the plain-image. This paper reports security defects of the chaos-based pseudo-random number generator and the sensitivity mechanism. As for one round version of IEAIE, its three basic parts can be broken with a strategy of the divide-and-conquer technique in the scenario of differential attack. In addition, each used security metric is questioned from the perspective of modern cryptanalysis.

The rest of the paper is organized as follows. Section II briefly introduces the algorithm IEAIE. Section III presents cryptanalysis of IEAIE by disproving security metrics used for IEAIE. The last section concludes the paper.

IEAIE ignores any special storage format of image data and just treats it as text data, which is represented as a M×N 8-bit matrix I 111The transform (5) in [27] can not always generate bijective (one-to-one) permutation mapping and should be corrected to assure successful decryption of IEAIE.

The horizontal and vertical permutations on the plain-image controlled by u and v can be equivalently represented by a permutation matrix P as [17], namely

[!htb](topskip=0pt, botskip=0pt, midskip=0pt)s1_e3_m2_d2_re_index3 The functional graph of 2D-LASM with 6-bit floating-point precision and round quantization, where the length of mantissa fraction is 3.

In [27], various aspects of IEAIE were analyzed to conclude that it owns superior security performance. However, we try to demonstrate that all the arguments are groundless.

Iii-a Some security defects of IEAIE

As shown in Fig. 4, an attacker can arbitrarily choose some plaintexts, P1,P2,⋯,Pn−1, and the corresponding ciphertexts, C1,C2,⋯,Cn−1, encrypted by the same secret key K in the scenario of chosen-plaintext attack. As for differences between plaintexts Pi and Pi+1, DP1,DP2,⋯,DPn−1, one can observe the corresponding differences between ciphertexts Ci and Ci+1, DC1,DC2,⋯,DCn−1. The differences are defined in terms of an invertible operation used in the encryption scheme, e.g. bitwise OR and modulo subtraction. So differential cryptanalysis can be considered as a chosen-plaintext attack on a weakened version of the analyzed encryption scheme for some differences selected from (n2)=n(n−1)/2 possible ones. In the broadest sense, differential cryptanalysis is a cryptanalytic method studying how particular differences in plaintext pairs affect the resultant differences, which is also called differential, of the corresponding ciphertext pairs. Considering the public structure of the analyzed encryption scheme, some basic parts can be deliberately canceled and the remaining part can be broken with much less resources. By repeating the process, the equivalent secret key of the whole encryption scheme ~K can be recovered, which is then used to decrypt another ciphertext Cn, encrypted by the same secret key.

From the above introduction of the chosen-plaintext attack, one can see that the attack model relies on repeating usage of the secret key. So the designers of IEAIE use the information entropy of the plain-image to “affect the usage of the keystream and frustrate the chosen-plaintext and known-plaintext attacks” in [27, Sec. 2.2]. However, based on the analysis on the insensitivity of information entropy in above sub-section, it is very easy to construct some plain-images possessing the same keystream during the encryption process of IEAIE. Observing the encryption procedure of IEAIE, one can see that its real operations are solely determined by N+1 parameters, s and {dj}Nj=1. Note that even when two plain-images generate different entropy values in the encryption process, their corresponding key steams are still maybe the same due to the following reasons: 1) the modulo addition and division in Eq. (2) may make different sets of (x0,y0,x′0,y′0,s) result in the same value of (¯x0,¯y0); 2) the quantization error of calculating log2(⋅) in computer may make different combinations of {ϕi}28−1i=0 generate the same value of H(X); 3) Eq. (11) only extract ⌈log2(N)⌉ bits of intermediate computing result of Rj, and may output the same value of dj for different inputs of Rj. Once the dependability mechanism of the key stream of IEAIE on the plain-image is concealed, the structure of Eq. (10) becomes the same as that of the main function of the image encryption scheme cryptanalyzed in [19]. Then, the differential cryptanalysis on IEAIE can be performed similarly.

Assume two plain-images I and I′ own the same set of s and {dj}Nj=1 in the encryption process of IEAIE. As for their difference in terms of modulo subtraction ΔI, IEAIE is degenerated to

where i=1∼M, j=1∼N, ΔC is the difference of the corresponding cipher-images of I and I′ in terms of the operator (some components in Eq. (10) are eliminated by the modulo subtraction), and ΔC(i,0)≡0. Observing Eq. (14), one can assure that

Based on the above analysis, the differential cryptanalysis on one round version of IEAIE can be described as follows.

A number of experiment were performed to verify performance of the above attacking steps. A concrete case of revealing the permutation relationship of IEAIE on a plain-image of size 8×8 is shown in Fig. 5, where x0=0.0056, y0=0.3678, x′0=0.6229, and y′0=0.7676, and μ=0.8116. In this case, the same set of s and {dj}8j=1 are generated for the two toy plain-images due to the quantization effect. From Fig. 5, we can see that the new permuted location of the sole non-zero element at entry (1,1) in the differential plain-image can be observed by searching for the first different elements of the two cipher-images.

In [27], two rounds of the basic operations are suggested. Here, we skip the cryptanalysis of the full version of IEAIE based on the following considerations: 1) existence of the security defects presented in the above sub-section is not related with the round number; 2) cryptanalysis of the two rounds of IEAIE involves very complex deduction and presentation; 3) the reported security defects of IEAIE are far enough to demonstrate that it cannot be fixed by simple modifications.

This paper analyzed the security of a chaotic image encryption algorithm based on information entropy, IEAIE. The claimed superiorities of its structure are analyzed in detail and are found incorrect. Furthermore, every used security metric is incapable to testify real security performance. To design a secure and efficient multimedia encryption scheme, the related critical factors, e.g. the special properties of multimedia data, the concrete application scenario with specified constraints, computation load, should be considered comprehensively. Much cryptanalytic works need to be done to bridge the gap between the field of nonlinear dynamics and that of modern cryptography.