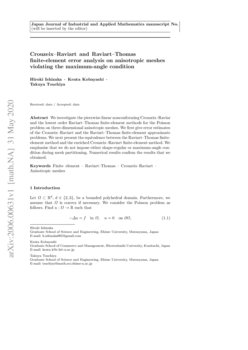 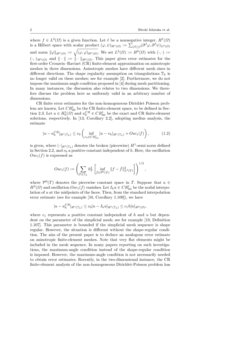 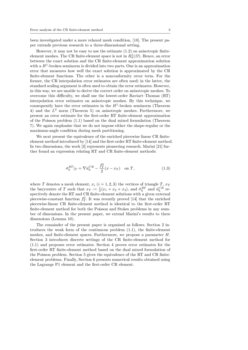 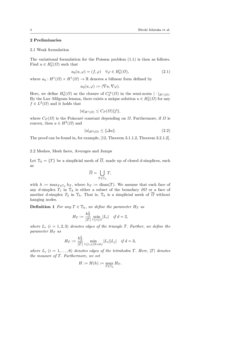 Let Ω be a Lipschitz polyhedral (can be nonconvex) domain in ℝ^3, and V_...
Huadong Gao, et al. ∙

Some error estimates for the DEC method in the plane

We show that the Discrete Exterior Calculus (DEC) method can be cast as ...
Ruben Carrillo, et al. ∙

Let Ω⊂Rd, d∈{2,3}, be a bounded polyhedral domain. Furthermore, we assume that Ω is convex if necessary. We consider the Poisson problem as follows. Find u:Ω→R such that

where f∈L2(Ω) is a given function. Let ℓ be a nonnegative integer. Hℓ(Ω) is a Hilbert space with scalar product (φ,ψ)Hℓ(Ω):=∑|β|≤ℓ(∂βφ,∂βψ)L2(Ω) and norm ∥φ∥Hℓ(Ω):=√(φ,φ)Hℓ(Ω). We set L2(Ω):=H0(Ω) with (⋅,⋅):=(⋅,⋅)H0(Ω) and ∥⋅∥:=∥⋅∥H0(Ω). This paper gives error estimates for the first-order Crouzeix–Raviart (CR) finite-element approximation on anisotropic meshes in three dimensions. Anisotropic meshes have different mesh sizes in different directions. The shape regularity assumption on triangulations Th is no longer valid on these meshes; see for example Ape99 . Furthermore, we do not impose the maximum-angle condition proposed in BabAzi76 during mesh partitioning. In many instances, the discussion also relates to two dimensions. We therefore discuss the problem here as uniformly valid in an arbitrary number of dimensions.

CR finite error estimates for the non-homogeneous Dirichlet Poisson problem are known. Let CR1h0 be the CR finite-element space, to be defined in Section 2.3. Let u∈H10(Ω) and uCRh∈CR1h0 be the exact and CR finite-element solutions, respectively. In (Gud10, , Corollary 2.2), adopting medius analysis, the estimate

is given, where |⋅|H1(Th) denotes the broken (piecewise) H1-semi norm defined in Section 2.2, and c0 a positive constant independent of h. Here, the oscillation Osc1(f) is expressed as

be the nodal interpolation of

u at the midpoints of the faces. Then, from the standard interpolation error estimate (see for example (ErnGue04, , Corollary 1.109)), we have

where c1 represents a positive constant independent of h and u but dependent on the parameter of the simplicial mesh; see for example (ErnGue04, , Definition 1.107). This parameter is bounded if the simplicial mesh sequence is shape regular. However, the situation is different without the shape-regular condition. The aim of the present paper is to deduce an analogous error estimate on anisotropic finite-element meshes. Note that very flat elements might be included in the mesh sequence. In many papers reporting on such investigations, the maximum-angle condition instead of the shape-regular condition is imposed. However, the maximum-angle condition is not necessarily needed to obtain error estimates. Recently, in the two-dimensional instance, the CR finite-element analysis of the non-homogeneous Dirichlet-Poisson problem has been investigated under a more relaxed mesh condition, KobTsu18b . The present paper extends previous research to a three-dimensional setting.

where T denotes a mesh element, xi (i=1,2,3) the vertices of triangle T, xT the barycentre of T such that xT:=13(x1+x2+x3), and ¯σRTh and ¯uCRh respectively denote the RT and CR finite-element solutions with a given external piecewise-constant function f0T. It was recently proved HuMa15 that the enriched piecewise-linear CR finite-element method is identical to the first-order RT finite-element method for both the Poisson and Stokes problems in any number of dimensions. In the present paper, we extend Marini’s results to three dimensions (Lemma 10).

The variational formulation for the Poisson problem (1.1) is then as follows. Find u∈H10(Ω) such that

where a0:H1(Ω)×H1(Ω)→R denotes a bilinear form defined by

where CP(Ω) is the Poincar´e constant depending on Ω. Furthermore, if Ω is convex, then u∈H2(Ω) and

Let Th={T} be a simplicial mesh of ¯¯¯¯Ω, made up of closed d-simplices, such as

with h:=maxT∈ThhT, where hT:=diam(T). We assume that each face of any d-simplex T1 in Th is either a subset of the boundary ∂Ω or a face of another d-simplex T2 in Th. That is, Th is a simplicial mesh of ¯¯¯¯Ω without hanging nodes.

For any T∈Th, we define the parameter HT as

where Li (i=1,2,3) denotes edges of the triangle T. Further, we define the parameter HT as

where Li (i=1,…,6) denotes edges of the tetrahedra T. Here, |T| denotes the measure of T. Furthermore, we set

We impose the following assumption.

We adopt the concepts of mesh faces, averages and jumps in the analysis of RT and CR finite element method. Let Fih be the set of interior faces and F∂h the set of the faces on the boundary ∂Ω. Let Fh:=Fih∪F∂h. For any F∈Fh, we define the unit normal nF to F as follows: (i) If F∈Fih with F=T1∩T2, T1,T2∈Th, let n1 and n2 be the outward unit normals of T1 and T2, respectively. Then, nF is either of {n1,n2}; (ii) If F∈F∂h, nF is the unit outward normal n to ∂Ω.

Let k be a positive integer. We then define the broken (piecewise) Sobolev space as

We here define a broken gradient operator as follows.

Note that H1(Ω)⊂H1(Th) and the broken gradient coincides with the distributional gradient in H1(Ω).

This section introduce the RT, CR and piecewise-constant finite element spaces and the interpolation error estimates poroposed in IshKobTsu .

Let T∈Th. For any k∈N0, let Pk(T) be the space of polynomials with degree at most k in T.

The lowest order RT finite element space is defined by

The functionals are defined by, for any v∈RT0(T),

We next define the local RT interpolation as

Further, we define the global RT interpolation IRTh:H(div;Ω)∩H1(Th)d→RT0h by

We give the local RT interpolation error estimate.

We have the following estimate such that

where CRTI is a positive constant independent of HT.

The global RT interpolation error estimate is obtained as follows.

Let {Th} be a family of conformal meshes satisfying Assumption 1. Then, there exists CRTg\textgreater0, independent of H, such that

In introducing a nonconforming method, we define the following CR finite element space as

Using the barycentric coordinates λi:Rd→R, i=1,…,d+1, we define the local basis functions as

For i=1,…,d+1, let Fi be the face of T and xFi the barycentre of face Fi. We then define the local CR interpolation operator as

Because the trace of a function in W1,1(T) is in L1(∂T), 1|Fi|∫Fiφds is meaningful. Further, it holds that

We define the global CR interpolation ICRh:W1,1(Ω)→CR1h0 by

We give the local CR interpolation error estimate.

We have the following estimates such that

Here, CCR,L2I and CCR,H1I are positive constants independent of hT and HT.

The inequality (2.14) can be improved by replacing HT with hT.

The global CR interpolation error estimates are obtained as follows.

Let {Th} be a family of conformal meshes satisfying Assumption 1. Then, there exist CCR,L2g,CCR,H1g\textgreater0, independent of H and h, such that

We define the standard piecewise constant space as

Note that Π0Tq is the constant function equal to 1|T|∫Tqdx. We also define the global L2-projection Π0h to the space M0h by

The error estimate of the L2-projection is as follows.

We have the error estimate of the L2-projection such that

Here, CL2P is a positive constant independent of hT.

The global error estimate of the L2-projection is obtained as follows.

Let {Th} be a family of conformal meshes satisfying Assumption 1. Then, there exists CL2Pg\textgreater0, independent of h, such that

Between the RT interpolation IRTh and the L2-projection Π0h, the following relation holds:

That is to say, the diagram

The proof of this lemma is found in Bra07 . ∎

The following relation plays an important role in the CR finite element analysis on anisotropic meshes.

We propose the discrete Poincaré inequality on anisotropic meshes.

Assume that Ω is convex. If H≤1, there exists C(Ω), independent of h, H, and the geometry of meshes, such that

We then have a priori estimates:

where CP is the Poincaré constant. We use the duality argument to show the target inequality. That is to say, we have

This problem is nonconforming because CR1h0⊄H10(Ω).

The first term of the inequality (3.2) is estimated as follows. Using the CR interpolation error estimate (2.16), we have, for any u∈H2(Ω),

From the standard scaling argument, we have a consistency error inequality, e.g., see (ErnGue04, , Lemma 3.36).

Let u∈H10(Ω)∩H2(Ω) be the solution of the homogeneous Dirichlet Poisson problem (1.1). It then holds that

where ∂Th denotes the set of all faces F of T∈Th. Here, ℓF denotes the distance of the vertex of T opposite to F to the face.

Because each face F of an element T located inside Ω appears twice in the above sum, we have

with the mean value