Mammogram is the most effective imaging modality for the mass lesion detection of breast cancer at the early stage. The information from the two paired views (i.e., medio-lateral oblique and cranio-caudal) are highly relational and complementary, and this is crucial for doctors' decisions in clinical practice. However, existing mass detection methods do not consider jointly learning effective features from the two relational views. To address this issue, this paper proposes a novel mammogram mass detection framework, termed Cross-View Relation Region-based Convolutional Neural Networks (CVR-RCNN). The proposed CVR-RCNN is expected to capture the latent relation information between the corresponding mass region of interests (ROIs) from the two paired views. Evaluations on a new large-scale private dataset and a public mammogram dataset show that the proposed CVR-RCNN outperforms existing state-of-the-art mass detection methods. Meanwhile, our experimental results suggest that incorporating the relation information across two views helps to train a superior detection model, which is a promising avenue for mammogram mass detection. 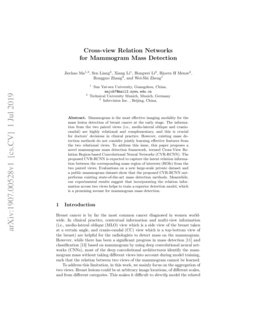 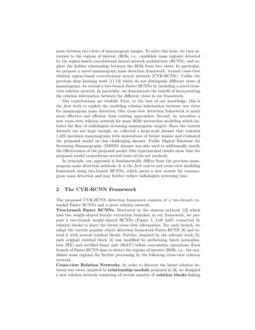 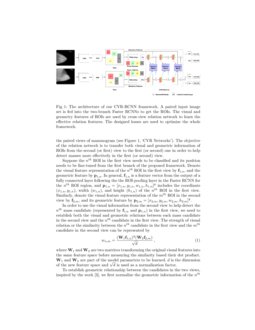 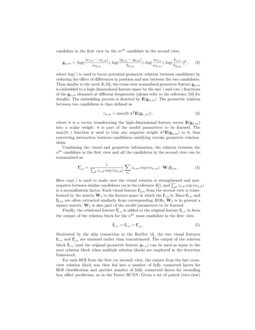 Breast cancer is by far the most common cancer diagnosed in women worldwide. In clinical practice, contextual information and multi-view information (i.e., medio-lateral oblique (MLO) view which is a side view of the breast taken at a certain angle, and cranio-caudal (CC) view which is a top-bottom view of the breast) are helpful for the radiologists to detect mass on the mammogram. However, while there has been a significant progress in mass detection [11] and classification [13] based on mammogram by using deep convolutional neural networks (CNNs), most of the deep convolutional architectures identify the mammogram mass without taking different views into account during model training, such that the relation between two views of the mammogram cannot be learned.

To address this limitation, in this work, we mainly focus on the aggregation of two views. Breast lesions could be at arbitrary image locations, of different scales, and from different categories. This makes it difficult to directly

[11, 13] which do not distinguish different views of mammogram, we extend a two-branch Faster RCNNs by including a novel cross-view relation network. In particular, we demonstrate the benefit of incorporating the relation information between the different views in our framework.

Our contributions are twofold. First, to the best of our knowledge, this is the first work to exploit the modeling relation information between two views for mammogram mass detection. Our cross-view detection framework is much more effective and efficient than existing approaches. Second, we introduce a new cross-view relation network for mass ROIs interaction modeling which imitates the flow of radiologists screening mammogram targets. Since the current datasets are not large enough, we collected a large-scale dataset that contains 1,425 specimen mammograms with annotations of breast masses and evaluated the proposed model on this challenging dataset. Public Digital Database for Screening Mammography (DDSM) dataset was also used to additionally justify the effectiveness of the proposed model. Our experimental results show that the proposed model outperforms several state-of-the-art methods.

1, Left half) connected by relation blocks to learn the latent cross-view information. For each branch, we adopt the current popular object detection framework Faster-RCNN [8] and extend it with several residual blocks. Further, inspired by the relevant work [5], each original residual block [4]

was modified by performing batch normalization (BN) and rectified linear unit (ReLU) before convolution operations. Each branch of Faster RCNN aims to detect the regions of interest (ROIs, i.e., the candidate mass regions) for further processing by the following cross-view relation network.

Cross-view Relation Networks. In order to discover the latent relation between two views, inspired by relationship module proposed in [6], we designed a new relation network consisting of certain number of relation blocks linking the paired views of mammogram (see Figure 1, ‘CVR Networks’). The objective of the relation network is to transfer both visual and geometric information of ROIs from the second (or first) view to the first (or second) one in order to help detect masses more effectively in the first (or second) view.

ROI in the first view needs to be classified and its position needs to be fine-tuned from the first branch of the proposed framework. Denote the visual feature representation of the

nth ROI in the first view by f1,n, and the geometric feature by p1,n. In general, f1,n

where W1 and W2 are two matrices transforming the original visual features into the same feature space before measuring the similarity based their dot product. W1 and W2 are part of the model parameters to be learned. d is the dimension of the new feature space and √d is used as a normalization factor.

where log(⋅) is used to boost potential geometric relation between candidates by reducing the effect of differences in position and size between the two candidates. Then similar to the work [6, 10], the cross-view normalized geometric feature gn,m is embedded to a high-dimensional feature space by the sin(⋅) and cos(⋅) functions of the gn,m elements at different frequencies (please refer to the reference [10] for details). The embedding process is denoted by E(gn,m). The geometric relation between two candidates is then defined as

where v is a vector transforming the high-dimensional feature vector E(gn,m) into a scalar weight. v is part of the model parameters to be learned. The max(0,⋅) function is used to trim any negative weight v⊺E(gn,m) to 0, thus restricting interaction between candidates satisfying certain geometric relationships.

Combining the visual and geometric information, the relation between the nth candidate in the first view and all the candidates in the second view can be summarized as

Here exp(⋅) is used to make sure the visual relation is strengthened and non-negative between similar candidates (as in the reference [6]), and ∑kvn,kexp(wn,k) is a normalization factor. Each visual feature f2,m from the second view is transformed by the matrix W3 to the feature space in which the f1,n is. Since f1,n and f2,m are often extracted similarly from corresponding ROIs, W3 is in general a square matrix. W3 is also part of the model parameters to be learned.

Motivated by the skip connection in the ResNet [4], the two visual features f1,n and f′1,n are summed rather than concatenated. The output of the relation block ~f1,n (and the original geometric feature p1,n) can be used as input to the next relation block when multiple relation blocks are employed in the detection framework.

For each ROI from the first (or second) view, the output from the last cross-view relation block was then fed into a number of fully connected layers for ROI classification and another number of fully connected layers for bounding box offset prediction, as in the Faster RCNN. Given a set of paired (two-view) images, the two-branch Faster RCNNs with the cross-view relation network can be trained by minimizing the loss function

where Li,cls and Li,reg respectively represent the classification and the regression losses from the ith view. α,β,γ are coefficients balancing the loss terms.

Private Dataset: To evaluate the proposed framework on the large breast mass dataset, we collected a large-scale dataset which contains 1,425 scanned mammography images with breast mass lesions. To the best of our knowledge, this dataset is the largest cohort collected specifically for breast masses detection. The annotations (bounding boxes of each breast lesion) were labeled by 4 experienced radiologists. Each senior radiologist evaluated the annotations made by the relatively junior experienced radiologist and made further modifications, if necessary.

DDSM Dataset: DDSM is a publicly available mammography dataset. As in other studies [1, 2, 9], 512 mammography films were used in the evaluation.

Data Preprocessing: To avoid over-fitting during training, the training set was augmented by affine transformations (e.g., rotations). Each image was resized to 1024×1024 pixels and the pixel values were rescaled to the range [0,255].

: MXNET library was applied to construct the proposed deep convolutional architecture. The model parameters were initialized by a pretrained ResNet-101 and then fine-tuned around 20 epochs using the early-stopping criterion with a mini-batch of two images for each device with 4 GPUs. The SGD optimizer was used with learning rate

Statistical Evaluation: In both datasets, about 80% paired images were used for training, and the remaining 20% for testing. F1

score, precision and recall were used as evaluation metrics. For the public dataset, true positive rate (TPR) versus false positive per image (FPI) were used as the metrics following previous work (e.g.,

3.2 Effect of the Relation Block

The proposed CVR-RCNN model was further evaluated on our private dataset by comparing with two representative detection frameworks Faster RCNN [8] and SSD [7]. In Table 2, ‘Faster RCNN’ and ‘SSD’ indicate that the data from two views are mixed (therefore not using view information) for training and testing. In comparison, ‘two-branch Faster RCNNs’ and ‘two-branch SSDs’ indicate that each view of data was used to train a individual detection model, and each test data was predicted by either the first or the second model based on which view it is from. As shown in Table 2, the two-branch Faster RCNNs and SSDs models perform clearly better than their corresponding versions without considering view information, e.g., for the two-branch Faster RCNNs model, the precision rate 65.27% vs. 64.01% and the recall rate 71.93% vs. 70.53%. This suggests that the separated models conditioned on views information outperforms the single model trained on the mix-view images.

However, for the two-branch Faster RCNNs model, it did not consider that the lesions in both of the two views may be largely related to each other. By learning the relationship between the two views, using the Cross-View Relation Network, our CVR-RCNN achieved the best performance, producing the notable improvements of the precision rate from 65.27% to 71.12%, and the recall rate from 71.93% to 75.33%. One reason for the notable improvement should be that, by sharing the visual and geometric information of the ROIs between the two views, the network is driven to learn the different manifestations of the same lesions in two views. Then for each ROI, the network would examine whether the ROI exists in both views. After such double check strategy, the false positive rate would be likely reduced, improving the precision rate and reducing the false positives per image (FPI).

To further justify the effectiveness of the proposed model, we performed experiments on the public DDSM dataset and compared with the results from the public DDSM leaderboard. Table 3 shows that our proposed method clearly outperforms the state-of-the-art methods for mass detection in mammograms, where the results from the competing methods are reported by their original authors. The results demonstrate that the proposed CVR-RCNN is noticeably better than the previous ones, suggesting that our CVR-RCNN is more suitable for mammogram mass detection.

In this work, we proposed a cross-view mammogram mass detection framework by combining the conventional CNN detection with a novel cross-view relation network. Extensive evaluations on a private dataset and a public dataset clearly demonstrated the superior performance of the proposed framework compared to state-of-the-art methods. This opens a new avenue to improve detection of mammogram mass where paired or multiple views of information are available.