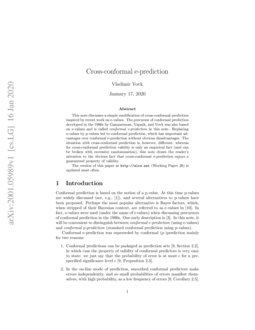 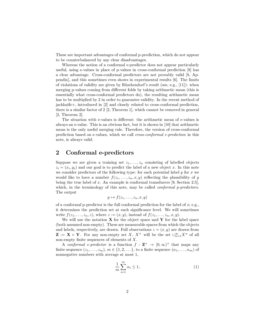 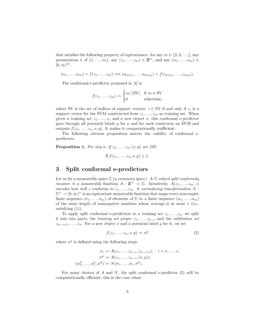 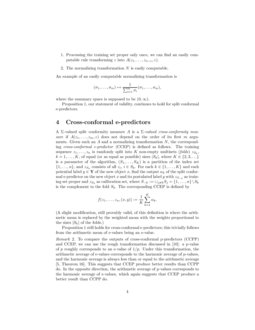 Conformal prediction is based on the notion of a p-value. At this time p-values are widely discussed (see, e.g., [1]

), and several alternatives to p-values have been proposed. Perhaps the most popular alternative is Bayes factors, which, when stripped of their Bayesian context, are referred to as e-values in

These are important advantages of conformal p-prediction, which do not appear to be counterbalanced by any clear disadvantages.

Suppose we are given a training set z1,…,zn consisting of labelled objects zi=(xi,yi) and our goal is to predict the label of a new object x. In this note we consider predictors of the following type: for each potential label y for x we would like to have a number f(z1,…,zn,x,y) reflecting the plausibility of y being the true label of x. An example is conformal transducers [9, Section 2.5], which, in the terminology of this note, may be called conformal p-predictors. The output

of a conformal p-predictor is the full conformal prediction for the label of x; e.g., it determines the prediction set at each significance level. We will sometimes write f(z1,…,zn,z), where z:=(x,y), instead of f(z1,…,zn,x,y).

We will use the notation X for the object space and Y for the label space (both assumed non-empty). These are measurable spaces from which the objects and labels, respectively, are drawn. Full observations z=(x,y) are drawn from Z:=X×Y. For any non-empty set X, X+ will be the set ∪∞n=1Xn of all non-empty finite sequences of elements of X.

The conformal e-predictor proposed in [4] is

is the set of indices of support vectors:

i∈SV if and only if zi is a support vector for the SVM constructed from z1,…,zm as training set. When given a training set z1,…,zn and a new object x, this conformal e-predictor goes through all potential labels y for x and for each constructs an SVM and outputs f(z1,…,zn,x,y). It makes it computationally inefficient.

The following obvious proposition asserts the validity of conformal e-predictors.

Let us fix a measurable space Σ (a summary space). A Σ-valued split conformity measure is a measurable function A:Z+→Σ. Intuitively, A(z1,…,zm,z) encodes how well z conforms to z1,…,zm. A normalizing transformation N:Σ+→[0,∞)+ is an equivariant measurable function that maps every non-empty finite sequence (σ1,…,σm) of elements of Σ to a finite sequence (α1,…,αm) of the same length of nonnegative numbers whose average is at most 1 (i.e., satisfying (1)).

To apply split conformal e-prediction to a training set z1,…,zn, we split it into two parts, the training set proper z1,…,zn−c and the calibration set zn−c+1,…,zn. For a new object x and a potential label y for it, we set

where αy is defined using the following steps:

For many choices of A and N, the split conformal e-predictor (2) will be computationally efficient; this is the case when:

An example of an easily computable normalizing transformation is

where the summary space is supposed to be (0,∞).

Proposition 1, our statement of validity, continues to hold for split conformal e-predictors.

A Σ-valued split conformity measure A is a Σ-valued cross-conformity measure if A(z1,…,zm,z) does not depend on the order of its first m arguments. Given such an A and a normalizing transformation N, the corresponding cross-conformal e-predictor (CCEP) is defined as follows. The training sequence z1,…,zn is randomly split into K non-empty multisets (folds) zSk, k=1,…,K, of equal (or as equal as possible) sizes |Sk|, where K∈{2,3,…} is a parameter of the algorithm, (S1,…,SK) is a partition of the index set {1,…,n}, and zSk consists of all zi, i∈Sk. For each k∈{1,…,K} and each potential label y∈Y of the new object x, find the output αk of the split conformal e-predictor on the new object x and its postulated label y with zS−k as training set proper and zSk as calibration set, where S−k:=∪j≠kSj={1,…,n}∖Sk is the complement to the fold Sk. The corresponding CCEP is defined by

(A slight modification, still provably valid, of this definition is where the arithmetic mean is replaced by the weighted mean with the weights proportional to the sizes |Sk| of the folds.)

Proposition 1 still holds for cross-conformal e-predictors; this trivially follows from the arithmetic mean of e-values being an e-value.

5 Validity in the time domain

Advantage 1 of conformal p-prediction given on p. 1 is that, when discussing validity, we can talk about probabilities instead of p-values. It mostly disappears when we move to conformal e-prediction: validity has to be defined in terms of e-values (however, it has been argued [7] that e-values are more intuitive than p-values). In this section we discuss advantage 2, which requires the online mode of prediction. We will see that it still holds, albeit in a weakened form.

The notion of validity asserted in Proposition 1 (applied to CCEP) is stated in the “space domain”: the output of the CCEP on the true label is an e-value, i.e., its mean value at a fixed time over the probability space does not exceed 1. Now we will complement the validity in the space domain by the validity in the time domain assuming that the CCEP is bounded.

Intuitively, using CCEP in the online mode defeats the purpose of cross-conformal prediction: once we process x1,y1,…,xn,yn, we would like to apply the rules that we have found (see item 1 on p. 1) to a large number of new objects rather than just one. But more realistic settings are also more complicated.

We can see that the long-term time average of the values for the true labels is bounded above by 1. In this sense they are time-wise e-values.

This research was partially supported by Astra Zeneca and Stena Line.