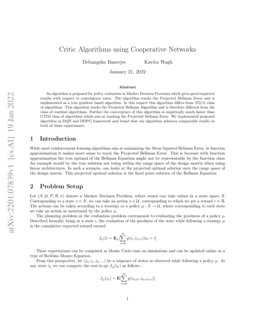 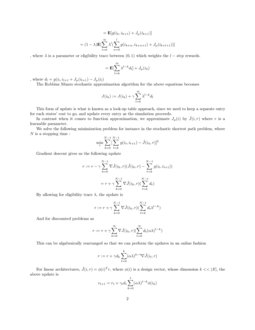 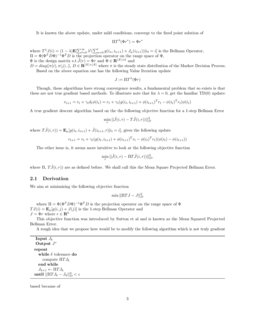 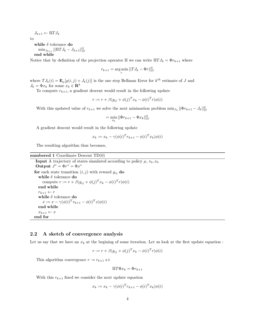 While most reinforcement learning algorithms aim at minimizing the Mean Squared Bellman Error, in function approximation it makes more sense to track the Projected Bellman Error. This is because with function approximation the true optimal of the Bellman Equation might not be representable by the function class. An example would be the true solution not being within the range space of the design matrix when using linear architectures. In such a scenario, one looks at the projected optimal solution onto the range space of the design matrix. This projected optimal solution is the fixed point solution of the Bellman Equation.

These expectations can be computed as Monte Carlo runs on simulations and can be updated online as a type of Robbins Munro Equation.

From this perspective, let (i0,i1,i2,...) be a sequence of states as observed while following a policy μ. At any state ik we can compute the cost-to-go Jμ(ik) as follows :

, where λ is a parameter or eligibility trace between (0,1) which weights the l−step rewards.

The Robbins Munro stochastic approximation algorithm for the above equations becomes

This form of update is what is known as a look-up table approach, since we need to keep a separate entry for each states’ cost to go, and update every entry as the simulation proceeds.

In contrast when it comes to function approximation, we approximate Jμ(i) by ~J(i,r) where r is a learnable parameter.

We solve the following minimization problem for instance in the stochastic shortest path problem, where N is a stopping time :

By allowing for eligibility trace λ, the update is

And for discounted problems as

is a design vector, whose dimension

It is known the above update, under mild conditions, converge to the fixed point solution of

Though, these algorithms have strong convergence results, a fundamental problem that so exists is that these are not true gradient based methods. To illustrate note that for λ=0, get the familiar TD(0) update:

The other issue is, it seems more intuitive to look at the following objective function

where Π, T~J(i,r)) are as defined before. We shall call this the Mean Square Projected Bellman Error.

We aim at minimizing the following objective function

where Π=Φ(ΦTDΦ)−1ΦTD is the projection operator on the range space of Φ TJ(i)=Eμ[g(i,j)+J(j)] is the 1-step Bellman Operator and J=Φr where r∈Rk

This objective function was introduced by Sutton et al and is known as the Mean Squared Projected Bellman Error.

which is not truly gradient based because of

To compute rk+1, a gradient descent would result in the following update

A gradient descent would result in the following update

2.2 A sketch of convergence analysis

Let us say that we have an xk at the begining of some iteration. Let us look at the first update equation :

With this rk+1 fixed we consider the next update equation

We use this value in the first update to get rk+2 s.t

This last equation is known to converge.

For implementations sake we have used the following schema, where each gradient update step is performed sequentially, without waiting for δ convergence.

For non-linear function approximations, say J(i)=~J(i,r) where r is a learnable parameter, we have used the following schema

This has suggested the following critic network design.

2.3.1 Implementation as a deep neural network

Let us say we have the following transition (i,gi,j,j)

We can implement this algorithm by the designing a cooperative neural network. It represents a cooperation in the sense that the output of each network reinforces the parameters of the other network.

represents the error which is backpropagated over the left hand network.

The box over Jr(i) and Jx(i) represents the error that is backpropagated over the right hand side network.

For control problems we have the following Q-factor alternative algorithm, where each Q(i,u)=~Q(i,u,r) where r is a learnable parameter and i∈X and u∈U

Since our algorithm is itself a critic network in essence, it can be used with any other actor network in conjunction to solve control problems.

We shall see more of these in the experimant section.

Let us consider the following problem. A Markov Chain that has 3 states

A, B and C. The transition probabilities are as marked.

The each transiotion has 0 reward except for the self transition at B and C which are 1. We choose the invariant distribution of π=[0,0.8,0.2] respectively for states A,B and C.

We have a simple state-feature representation ϕ(A)=ϵ, ϕ(B)=−1 and ϕ(C)=1 where ϵ is a small positive numbers to ensure we don’t run into zero gradient estimates.

We first plot the objective function

, which is used for gradient based algorithms w.r.t the tunable paramater θ

Let us compare this with the MSPBE objective function

We see that the MSPBE error (Figure 7) is less than the MSBE (Figure 7).

Let us now look at how the TD(λ) performs. The TD(λ) is known to track the MSPBE. The TD(λ) algorithm also has the fastest convergence rates compared to gradient based methods.

We plot the MSPBE of the TD(0) algorithm with the updates of the tunable parameter θ.

We first show the result when the initial point of θ0=5.0 (Figure 7) From the MSPBE graph we see that it would converge to a suboptimal solution of 0.5

The learning rate has been kept fixed at 0.001, instead of using decreasing step size. This results in some noise but we ignore that, as the point is made clear that a local minima of 0.5 is reached.

We are also confirmed that while start at initial values of θ0=−5.0 we reach the global minima of 0 (Figure 7).

Again a bit of overshoot is visible because of the randomness in the simulation and using constant step sizes.

That the gradient based algorithms are slower is confirmed by having taken learning rates 0.01, 10 times that of TD algorithms.

However GTD2 has quite slow convergence. The leaning rate has been fixed to 100 which is 10000 times that of gradient based algorithms.

We now see that the proposed algorithm not only tracks the MSPBE (Figure 7) but the learning rate chosen is 0.1, which is 1000 times as less than GTD2 based algorithm.

The derivation also shows that this can be implemented very easily since it is a gradient based algorithm by itself.

To analyze the effects of the proposed network update rule we carried out the experiments in two different existing frameworks:Deep Q-Network(DQN)[2] and Deep Deterministic Policy Gradient(DDPG)[1]. We are using these existing frameworks because we aim to investigate the impact of proposed update rule in different existing settings111Implementation code in available at https://github.com/kavitawagh/RLProject.git. DQN and DDPG are the benchmark algorithms in discrete action space and continuous action space setting, respectively.

In the following sections we explain how have we implemented the proposed update rule in DQN and DDPG framework and we also present the results of our experiments.

For MDPs having discrete action space, DQN is the non-linear approximation of Q-function implemented using neural networks. The state s is the input to Q-Network and for each action a in the action space, Q-Network outputs the Q-value Q(S,a). Greedy policy is used to select single Q-value out of all outputs of the Q-Network, where Q-value selected is maxaQ(s,a).

Non-linear function approximation is known to be unstable or even diverge when used to approximate Q-value function. One of the reason for the instability is the correlation between Q-value Q(s,a) and target Q-value {reward+γ∗maxa′Q(s′,a′)} when same network is used to predict Q-values and target Q-values. Hence in DQN framework, target Q-values are predicted by different Q-Network whose weight parameters are updated periodically. DQN also uses a replay buffer for training the Q-Network with a batch of transitions. Every time an agent takes some action in environment, the state transition tuple (current_state,action,reward,next_state) is stored in the replay buffer. In the network training step, a random batch of transition tuples is sampled from replay buffer and used in network optimization. Figure 9 presents the original DQN algorithm.

We trained our Q-Network for OpenAI Gym CartPole environment. Cart-Pole is the classical reinforcement learning problem where the aim is to balance the pole upright on the cart by moving the cart left or right. State is represented by a list of observations [cart position, cart velocity, pole angle, pole velocity at the tip]. Actions include pushing the cart left or right. Reward is +1 for every step taken by the agent, including the termination step. Episode terminates if pole angle is more than ±12∘ or the accumulated reward is equal to 200.

We trained the Q-Network using original DQN algorithm and DQN algorithm with proposed update rule. Figure 11 shows the plot of actual training reward against the episode numbers. We can see that the results of proposed update rule are comparable to that of the original DQN algorithm. After achieving the highest, the reward goes to zero in some episodes. This is possible because of the stochastic nature of the problem and the behaviour policy being used. We are using epsilon-greedy policy where minimum epsilon value is 0.1, that is agent can take random action with probability 0.1.

DDPG is actor-critic algorithm based on deterministic policy gradient for the problems having continuous action space. It uses the non-linear approximation of critic which models the Q-value function and actor which models the deterministic policy μ. Critic network predicts the Q-value Q(s,a) given the state s and action a as input. Actor network predicts the action μ(s) given state s as the input.

where J is the state-value function, Q(.,.) is the Q-value function(critic network), μ is the deterministic policy(actor network with parameters θ) Figure 12 presents the original DDPG algorithm.

There are two actor networks: main actor and target actor; and two critic networks: main critic and target critic. The predictions of main networks are actually used to select action for the agent while target networks are used to calculate Bellman operator. First, a batch of transitions (current_state,action,reward,next_state) is sampled from the replay buffer. Feeding next_state as input to target actor, we get target_action. This target_action with next_state in target critic gives target_QValue. Then we calculate Bellman operator value y which is used as target to optimize the main critic network. In original DDPG algorithm, the weights of the both target models are updated using soft update rule. In our modification, we replace the weight update step for target critic by an optimization step.

We trained our actor-critic network on OpenAI Gym BipedalWalker-v3 environment. BipedalWalker is a robot with a LIDAR system and two legs having four joints, two in each leg. The goal is to train the robot to walk as fast as possible on the simple terrain(with no obstacles). The environment state contains the LIDAR sensor measurements, joint positions, velocity, etc. The action is to apply the torques on four joints. The torque for any joint is value in [-1, 1] and this makes it continuous action space problem. The +1 reward is given for moving one step forward, total 300+ points up to the far end. If the robot falls, it gets -100 reward.

We trained the actor-critic using original DDPG algorithm and DDPG algorithm with proposed update rule. Figure 14 shows the plots for actual training. The no. of steps the robot is able to balance on its legs is larger in modified DDPG than that in the original DDPG (Figure 13(a)). After visualizing the training episodes we came to know that agent in original DDPG is trying to move forward without taking the proper balanced pose first, and was falling immediately. While agent in modified DDPG first tries to take a balanced pose before trying to move forward. Since no. of steps the agent is alive is different for every episode we show the average reward per episode in Figure 13(b). This figure indicates that the modified DDPG explores more than the original DDPG. Figure 13(c) shows the Q-value plot for both the algorithms.