Continuous phase modulation (CPM) plays an important role in wireless communications due to its constant envelope signal property and tight spectrum confinement capability. Although CPM has been studied for many years, CPM training waveforms having autocorrelations with zero sidelobes have not been reported before, to the best of our knowledge. Existing works on CPM system design mostly assume that the channel fading coefficients are either perfectly known at the receiver or estimated using random CPM training waveforms. In this work, we propose a novel class of CPM training waveforms displaying autocorrelation sidelobes close to zero. The key idea of our construction is to apply differential encoding to Golay complementary pair having perfect aperiodic autocorrelation sum properties. 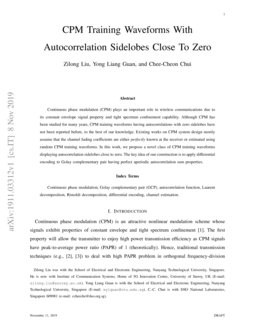 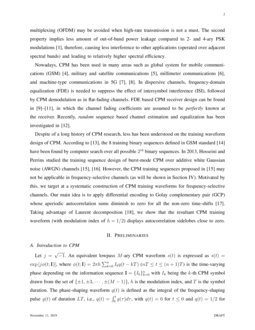 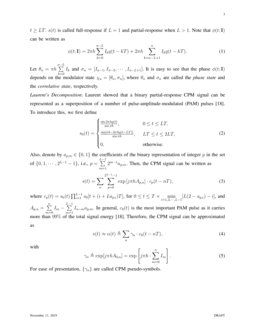 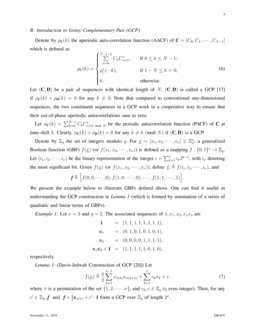 . In dispersive channels, frequency-domain equalization (FDE) is needed to suppress the effect of intersymbol interference (ISI), followed by CPM demodulation as in flat-fading channels. FDE based CPM receiver design can be found in

[9, 10, 11], in which the channel fading coefficients are assumed to be perfectly known at the receiver. Recently, random sequence based channel estimation and equalization has been investigated in [12].

Despite of a long history of CPM research, less has been understood on the training waveform design of CPM. According to [13], the 8 training binary sequences defined in GSM standard [14] have been found by computer search over all possible 216 binary sequences. In 2013, Hosseini and Perrins studied the training sequence design of burst-mode CPM over additive white Gaussian noise (AWGN) channels [15, 16]. However, the CPM training sequences proposed in [15] may not be applicable in frequency-selective channels (as will be shown in Section IV). Motivated by this, we target at a systematic construction of CPM training waveforms for frequency-selective channels. Our main idea is to apply differential encoding to Golay complementary pair (GCP) whose aperiodic autocorrelation sums diminish to zero for all the non-zero time-shifts [17]. Taking advantage of Laurent decomposition [18], we show that the resultant CPM training waveform (with modulation index of h=1/2) displays autocorrelation sidelobes close to zero.

Let θn=πhn−L∑k=0Ik and σn=[In−1,In−2,⋯,In−L+1]. It is easy to see that the phase ϕ(t;I) depends on the modulator state χn=[θn,σn], where θn and σn are called the phase state and the correlative state, respectively.

Laurent’s Decomposition: Laurent showed that a binary partial-response CPM signal can be represented as a superposition of a number of pulse-amplitude-modulated (PAM) pulses [18]. To introduce this, we first define

Denote by ρC(k) the aperiodic auto-correlation function (AACF) of C=[C0,C1,⋯,CN−1] which is defined as

Let (C,D) be a pair of sequences with identical length of N. (C,D) is called a GCP [17] if ρC(k)+ρD(k)=0 for any k≠0. Note that compared to conventional one-dimensional sequences, the two constituent sequences in a GCP work in a cooperative way to ensure that their out-of-phase aperiodic autocorrelations sum to zero.

We present the example below to illustrate GBFs defined above. One can find it useful in understanding the GCP construction in Lemma 1 (which is formed by summation of a series of quadratic and linear terms of GBFs).

In this section, we will propose a training waveform design for CPM signal s(t) [or the approximation α(t)] with periodic autocorrelation sidelobes close to zero. Throughout the proposed design, we consider binary CPM with h=1/2. Therefore, exp[jπh]=j. To get started, we first consider a sequence of {γn}2N−1n=0 with 2N non-zero elements satisfying N>L+1 and

In addition, the AACF of c0(t), the most significant pulse in Laurent’s decomposition, is defined as

Similarly, applying “differential-encoding” to ~D≜[D,D], we obtain ID≜diff([D,D])=[ID,0,ID,1,⋯,ID,2N−1] assuming ~D−1=1. As we will see later, differential-encoding helps to mitigate the correlations among CPM symbols which facilitates the design of CPM training waveforms with autocorrelation sidelobes close to zero. Then, send IC and IC for CPM modulation following the transmission structure shown in Fig. 1. The “Z tail bits”, placed before IC (or ID), are used to return the CPM modulator phase state to zero. Systematic method for the generation of tail bits can be found in [9] using Rimoldi decomposition [21].

Applying IC as a sequence of 2N CPM symbols, the CPM pseudo-symbols can be expressed as follows.

In this case, (8) holds. This implies that IC is a periodic transmission of two identical length-N sequences, which in turn allows the calculation of PACF at the local receiver. The approximated CPM waveform αC(t) in (4) can be written as

Denote by αD(t) the approximated CPM waveform (after “differential encoding”) corresponding to ID. Similar to (18), we have

Next, we will show γC≜{γC,n}N−1n=0 and γD≜{γD,n}N−1n=0 form a quaternary GCP provided that (C,D) is a binary GCP generated by the Davis-Jedwab construction (see Lemma 1). In the context of Lemma 1, let

At the receiver, S(2)C and S(2)D are taken as two local reference waveforms for correlation with S(1)C and S(1)D, respectively. This is because S(1)C (and S(1)D) will be spread into the time window of NT≤t≤2NT [and (3N+Z)T≤t≤(4N+Z)T] owing to the multipath propagation. Finally, we have the following assertion.

Applying differential encoding to GCPs 1 and 2, we obtain differentially-encoded pairs, denoted by “Diff-GCP 1” and “Diff-GCP 2”, respectively. Each pair will be sent as IC and ID (see Section III) for CPM modulation following the transmission structure in Fig. 1. For comparison, differential encoding is also applied to GSM sequence [+−+++−−−−+−−−+−−] [14]. The resultant sequence is referred to as “Diff-GSM” and will be sent as IC only for CPM training. For simulation, we consider the GMSK frequency pulse g(t) below.

Next, we apply a set of CPM training waveforms, which are normalized to have identical energy in the transmission, for estimation of a 16-path channel (separated by integer symbols duration) having uniform power delay profile. Specifically, we consider h[t]=∑15n=0hiδ[t−nT], where hi

’s are complex-valued Gaussian random variables with zero mean and

Furthermore, under the same frequency-selective channel model, Fig. 4 compares the uncoded bit-error-rates (BERs) of GMSK systems using perfect channel state information (CSI) and estimated CSI from the proposed CPM training waveforms. Here, we follow the CPM receiver design developed in [9], where single-carrier frequency-domain equalization (SC-FDE) with minimum MSE is adopted. It is seen that the BER curves corresponding to the two Diff-GCPs are very close, and are about 1.4dB to the BER curve with perfect CSI. On the other hand, the BER curve corresponding to Diff-GSM displays 5dB distance to that with perfect CSI.

A systematic construction of CPM training waveform displaying autocorrelation sidelobes close to zero has been proposed. Our idea is to apply differential-encoding to a GCP and then send the encoded component sequences one after another, separated by tail bits, to the CPM modulator. Note that this work is focused on binary CPM with modulation index of 1/2. It would be interesting to extend the presented training waveform design to generic CPM schemes (e.g., non-binary modulation orders, rational/integer modulation indices) using CPM decompositions reported in [23] and [24].