In this paper, we investigate covert communication over millimeter-wave (mmWave) frequencies. In particular, a mmWave transmitter Alice attempts to reliably communicate to a receiver Bob while hiding the existence of communication from a warden Willie. In this regard, operating over mmWave bands not only increases the covertness thanks to directional beams, but also increases the transmission data rates given much more available bandwidths and enables ultra-low form factor transceivers due to the lower wavelengths used compared to the conventional radio frequency (RF) counterpart. We first assume that the transmitter Alice employs two independent antenna arrays in which one of the arrays is to form a directive beam for data transmission to Bob. The other antenna array is used by Alice to generate another beam toward Willie as a jamming signal while changing the transmit power independently across the transmission blocks. For this dual-beam setup, we characterize Willie's detection error rate with the optimal detector and the closed-form of its expected value from Alice's perspective. We then derive the closed-form expression for the outage probability of the Alice-Bob link, which enables characterizing the optimal covert rate that can be achieved using the proposed setup. We further obtain tractable forms for the ergodic capacity of the Alice-Bob link involving only one-dimensional integrals that can be computed in closed forms for most ranges of the channel parameters. Finally, we highlight how the results can be extended to more practical scenarios, particularly to cases where perfect information about the location of the passive warden is not available. Our results demonstrate the advantages of covert mmWave communication compared to the RF counterpart. The research in this paper is the first analytical attempt in exploring covert communication using mmWave systems. 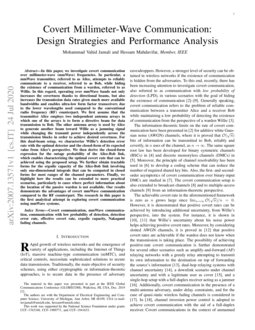 Rapid growth of wireless networks and the emergence of variety of applications, including the Internet of Things (IoT), massive machine-type communication (mMTC), and critical controls, necessitate sophisticated solutions to secure data transmission. Traditionally, the main objective of security schemes, using either cryptographic or information-theoretic approaches, is to secure data in the presence of adversary eavesdroppers. However, a stronger level of security can be obtained in wireless networks if the existence of communication is hidden from the adversaries. To this end, recently, there has been increasing attention to investigate covert communication, also referred to as communication with low probability of detection (LPD), in various scenarios with the goal of hiding the existence of communication [bash2013limits, bash2015hiding, che2013reliable, wang2016fundamental, bloch2016covert, tahmasbi2018first, arumugam2019embedding, arumugam2018covert]. Generally speaking, covert communication refers to the problem of reliable communication between a transmitter Alice and a receiver Bob while maintaining a low probability of detecting the existence of communication from the perspective of a warden Willie [bash2015hiding].

The information-theoretic limits on the rate of covert communication have been presented in [bash2013limits] for additive white Gaussian noise (AWGN) channels, where it is proved that O(√n) bits of information can be transmitted to Bob, reliably and covertly, in n uses of the channel, as n→∞. The same square root law has been developed for binary symmetric channels (BSCs) in [che2013reliable] and discrete memoryless channels (DMCs) in [wang2016fundamental]. Moreover, the principle of channel resolvability has been used in [bloch2016covert] to develop a coding scheme that can reduce the number of required shared key bits. Also, the first- and second-order asymptotics of covert communication over binary-input DMCs are studied in [tahmasbi2018first]. The covert communication setup is also extended to broadcast channels [arumugam2019embedding] and to multiple-access channels [arumugam2018covert] from an information-theoretic perspective.

The achievable covert rate in the aforementioned framework is zero as n grows large since limn→∞O(√n)/n=0. However, it is demonstrated that positive covert rates can be achieved by introducing additional uncertainty, from Willie’s perspective, into the system. For instance, it is shown in [lee2015achieving, goeckel2016covert] that Willie’s uncertainty about his noise power helps achieving positive covert rates. Moreover, by considering slotted AWGN channels, it is proved in [bash2016covert] that positive covert rates are achievable if the warden does not know when the transmission is taking place. The possibility of achieving positive-rate covert communication is further demonstrated for several other scenarios such as amplify-and-forward (AF) relaying networks with a greedy relay attempting to transmit its own information to the destination on top of forwarding the source’s information [hu2018covert], dual-hop relaying systems with channel uncertainty [wang2019covert], a downlink scenario under channel uncertainty and with a legitimate user as cover [shahzad2017covert], and a single-hop setup with a full-duplex receiver acting as a jammer [shahzad2018achieving]. Additionally, covert communication in the presence of a multi-antenna adversary, under delay constraints, and for the case of quasi-static wireless fading channels is considered in [shahzad2019covert]. In [hu2019covert], channel inversion power control is adopted to achieve covert communication with the aid of a full-duplex receiver. Covert communications in the context of unmanned aerial vehicle (UAV) networks is considered in [zhou2019joint]. Very recently, the problem of joint covert communication and secure transmission in untrusted relaying networks in the presence of multiple wardens has been considered in [forouzesh2020covert]. Moreover, the benefits of beamforming in improving the performance of covert communication in the presence of a jammer has been studied in [forouzesh2020covert2].

Prior studies on covert communication in wireless networks mostly consider omnidirectional transmission over conventional radio frequency (RF) wireless links. However, a superior performance can be potentially attained when performing the covert communication over millimeter-wave (mmWave) bands. In particular, operating over mmWave bands not only increases the covertness thanks to directional beams, but also increases the transmission data rates given much more available bandwidths and enables ultra-low form factor transceivers due to the lower wavelengths used compared to the conventional RF counterpart. This makes the mmWave band a suitable option for covert communication to increase the security level of wireless applications involving critical data. Also, with the advancement in mmWave communications and rapid development of mmWave cellular networks in the fifth generation of wireless networks (5G), mmWave systems will serve as major components for a wide range of emerging wireless networking applications and use cases. This necessitates secure transmission schemes for mmWave systems and further highlights the importance of covert mmWave communication.

The channel model and system architecture of mmWave communication systems significantly differ from those of RF communication. In particular, communication over mmWave bands can exploit directive beams, thanks to the deployment of massive antenna arrays, to compensate for the significant path loss over this range of frequency. Meanwhile, the significant susceptibility of directive mmWave links to blockage results in a nearly bimodal channel depending on whether a line-of-sight (LOS) link exists between the transmitter and receiver [andrews2017modeling]. Furthermore, the properties of mmWave and RF channels, including path loss and statistical distribution of fading, are often modeled very differently. Therefore, the existing results on covert communication cannot immediately be extended to covert communication over mmWave bands.

In this paper, we study covert communication over mmWave channels from a communication theory perspective. More specifically, we analyze the performance of the system in the limit as the block-length n grows large. In order to achieve a positive-rate covert communication, the transmitter Alice is equipped with two antenna arrays each pointed to a different direction and carrying independent data streams. The first antenna array forms a directive beam for covert data transmission to Bob. The second array is used to generate another beam toward Willie as a jamming signal while the transmit power is changed independently across transmission blocks in order to achieve desired covertness. For this dual-beam transmitter setup we characterize Willie’s optimal detection performance in terms of the overall detection error, and derive the closed form for the expected value of the detection error rate from Alice’s perspective. We then obtain the closed-form expression for the outage probability of the Alice-Bob link. This leads to characterization of the optimal covert rate that is achieved in our proposed setup. We further obtain tractable forms for the ergodic capacity of the Alice-Bob link involving only one-dimensional integrals that can be computed in closed forms for most ranges of the channel parameters. Finally, we highlight how the results can be extended to more practical scenarios, particularly to the cases where perfect information about Willie’s location is not available to Alice. Our results highlight the advantages of covert mmWave communication compared to the RF counterpart.

The research in this paper is the first attempt in analytical studies of covert communication over mmWave systems. It is worth mentioning that a conceptual framework for covert mmWave communication was envisioned in [cotton2009millimeter] without providing analytical studies. To the best of authors’ knowledge, no analytical characterization for covert mmWave system has been carried out in prior works. Very recently, after the appearance of the initial version of this work [jamali2019covert], Zhang et al. [zhang2020joint] studied joint beam training and data transmission for covert mmWave communication. More specifically, the authors of [zhang2020joint] aimed at jointly optimizing the beam training duration (to establish a directional link between Alice and Bob), training power, and data transmission power to maximize the effective covert rate while satisfying the covertness constraint on Willie.

Recent experimental studies have demonstrated that mmWave links are highly sensitive to blocking effects [rappaport2013millimeter, andrews2017modeling]. In order to model this characteristic, a proper channel model should differentiate between the LOS and non-LOS (NLOS) channel models since the path loss in the NLOS links can be much higher than that of the LOS path due to the weak diffractions in the mmWave band. Therefore, two different sets of parameters are considered for the LOS and NLOS mmWave links, and a deterministic function PLOS(dij)∈[0,1], that is a non-increasing function of the link length dij (in meters) between the nodes i and j, is defined to characterize the probability of an arbitrary link of length dij being LOS. Detailed overview of several blocking models for characterizing PLOS(dij) is provided in [andrews2017modeling]. In this paper, we consider a generic function PLOS(dij) throughout our analysis and use the model PLOS(dij)=e−dij/200, suggested in [andrews2017modeling], for our numerical analysis.

In the following, we describe how the channel for LOS and NLOS links can be characterized. Same as in [andrews2017modeling], we express the channel coefficient for an arbitrary mmWave link between the transmitter i and receiver j as hij=~hij√GijLij, where ~hij, Gij, and Lij are the channel fading coefficient, the total directivity gain (including both the transmitter and the receiver beamforming gains), and the path loss of the i-j mmWave link, respectively.