A graph is called P_t-free if it does not contain a t-vertex path as an induced subgraph. While P_4-free graphs are exactly cographs, the structure of P_t-free graphs for t ≥ 5 remains little understood. On one hand, classic computational problems such as Maximum Weight Independent Set (MWIS) and 3-Coloring are not known to be NP-hard on P_t-free graphs for any fixed t. On the other hand, despite significant effort, polynomial-time algorithms for MWIS in P_6-free graphs [SODA 2019] and 3-Coloring in P_7-free graphs [Combinatorica 2018] have been found only recently. In both cases, the algorithms rely on deep structural insights into the considered graph classes. One of the main tools in the algorithms for MWIS in P_5-free graphs [SODA 2014] and in P_6-free graphs [SODA 2019] is the so-called Separator Covering Lemma that asserts that every minimal separator in the graph can be covered by the union of neighborhoods of a constant number of vertices. In this note we show that such a statement generalizes to P_7-free graphs and is false in P_8-free graphs. We also discuss analogues of such a statement for covering potential maximal cliques with unions of neighborhoods. 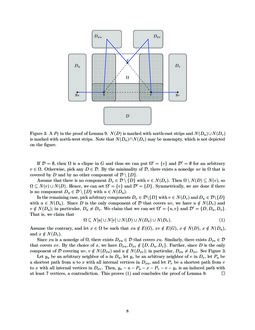 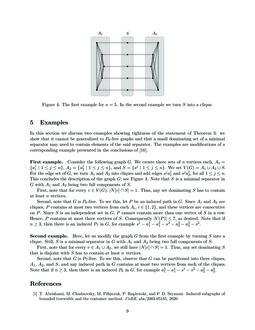 By Pt we denote a path on t vertices. A graph is H-free if it does not contain an induced subgraph isomorphic to H.

We are interested in classifying the complexity of fundamental computational problems, such as

The lack of NP-hardness results on one side, and shortage of generic algorithmic tools in Pt-free graphs on the other side, calls for a deeper understanding of the structure of Pt-free graphs for larger values of t. In this note we discuss one property that appeared important in the algorithms for MWIS for P5-free and P6-free graphs [17, 16, 14], namely the possibiliy to cover a minimal separator with a small number of vertex neighborhoods.

A framework of Bouchitté and Todinca [5, 6], extended by Fomin, Todinca, and Villanger [11], allows solving multiple computational problems (including MWIS and Feedback Vertex Set) on graph classes where graphs have only a polynomial number of PMCs. While P5-free graphs do not have this property, the crucial insight of the work of Lokshtanov, Villanger and Vatshelle [17] allows modifying the framework to work for P5-free graphs and, with more effort, for P6-free graphs [14].

A simple, but crucial in [17], insight about the structure of P5-free graphs is the following lemma.

Let G be a P5-free graph, let S be a minimal separator in G, and let A and B be two full components of S. Then for every a∈A and b∈B it holds that S⊆NG(a)∪NG(b).

The above statement is per se false in P6-free graphs, but the following variant is true and turned out to be pivotal in [14]:

That is, every minimal separator in a P6-free graph has a dominating set of size at most 6, contained in the union of two full components of this separator.

In Section 3 we extend the result to P7-free graphs as follows.

Let G be a P7-free graph and let S be a minimal separator in G. Then there exists a set S′⊆V(G) of size at most 22 such that S⊆NG[S′].

Theorem 3 directly generalizes a statement proved by Lokshtanov et al. [16, Theorem 1.3], which was an important ingredient of their quasi-polynomial-time algorithm for MWIS in P6-free graphs.

Section 5 discusses a modified example from [16] that witnesses that no statement analogous to Theorem 3 can be true in P8-free graphs. Furthermore, observe that in the statements for P5-free and P6-free graphs the dominating set for the separator is guaranteed to be contained in two full components of the separator. This is no longer the case in Theorem 3 for a reason: in Section 5 we show examples of P7-free graphs where any constant-size dominating set of a minimal separator needs to contain a vertex from the said separator.

The intuition behind the framework of PMCs, particularly visible in the quasi-polynomial-time algorithm for MWIS in P6-free graphs [16], is that potential maximal cliques can serve as balanced separators of a graph. Here, X⊆V(G) is a balanced separator of G if every connected component of G−X has at most |V(G)|/2 vertices. The quasi-polynomial-time algorithm of [16] tried to recursively split the graph into significantly smaller pieces by branching and deleting as large as possible pieces of such a PMC. Motivated by this intuition, in Section 4 we generalize Theorem 3 to dominating potential maximal cliques:

Let G be a P7-free graph and let Ω be a potential maximal clique in G. Then there exists a set Ω′⊆V(G) of size at most 68 such that Ω⊆NG[Ω′].

Since every minimal separator is a subset of some potential maximal clique in a graph, Theorem 4 generalizes Theorem 3. For the same reason, our examples for P8-free graphs also prohibit extending Theorem 4 to P8-free graphs.

For basic graph notation, we follow the arXiv version of [14]. We outline here only nonstandard notation that is not presented in the introduction.

A set Ω⊆V(G) is a potential maximal clique (PMC) if:

none of the connected components of cc(G−Ω) is full to Ω; and

In the second condition, we will say that the component D covers the non-edge uv. As announced in the introduction, we have the following.

For a graph G, a vertex subset Ω⊆V(G) is a PMC if and only if there exists a minimal chordal completion F of G such that Ω is a maximal clique in G+F.

We will also need the following statement.

For every PMC Ω of G and every D∈cc(G−Ω), the set NG(D) is a minimal separator.

Let G be a graph. A set M⊆V(G) is a module of G if N(x)∖M=N(y)∖M for every x,y∈M. Note that ∅, V(G) and all the singletons {x} for x∈V(G) are modules; we call these modules trivial. A graph is prime if all its modules are trivial. A module M of G is strong if M≠V(G) and M does not overlap with any other module of G, i.e., for every module M′ of G we have either M⊆M′, or M′⊆M, or M∩M′=∅.

It is well-known (cf. [15, Lemma 2]) that if |V(G)|>1 then the family of (inclusion-wise) maximal strong modules of G forms a modular partition of G whose quotient graph is either an independent set (if G is not connected), a clique (if the complement of G is not connected), or a prime graph (otherwise). We denote this modular partition by Mod(G) and we let Quo(G)\coloneqqG/Mod(G). For D⊆V(G), we abbreviate Mod(G[D]) and Quo(G[D]) with Mod(D) and Quo(D), respectively.

This section is devoted to the proof of Theorem 3. We need the following two results from [14].

Suppose X is a non-empty finite set and (X,≤1) and (X,≤2) are two quasi-orders. Suppose further that every pair of two different elements of X is comparable either with respect to ≤1 or with respect to ≤2. Then there exists an element x∈X such that for every y∈X we have either x≤1y or x≤2y.

Lemma 8 (Neighborhood Decomposition Lemma of [14], Lemma 18 of the arXiv version).

Suppose G is a graph and D⊆V(G) is subset of vertices such that |D|≥2 and G[D] is connected. Suppose further that vertices p,q∈D respectively belong to different elements Mp,Mq of the modular partition Mod(D) such that Mp and Mq are adjacent in the quotient graph Quo(D). Then, for each vertex u∈N(D) at least one of the following conditions holds:

In particular, if Quo(D) is not a clique, then the last condition cannot hold.

We need the following claim.

By Lemma 8, Quo(Ai) is a clique and both Ai∩(N(x)∖N(y)) and Ai∩(N(y)∖N(x)) are the unions of some disjoint collections of maximal strong modules of G[Ai]. The claim follows.     ┘

In the rest of the proof, we construct sets Rbc,Rcb and Rcc such that Sαβ⊆N[Rαβ] for αβ∈{bc,cb,cc}. We will conclude that S′\coloneqqRa∪Rbc∪Rcb∪Rcc satisfies the statement of the lemma, because |Ra|=4 and we will ensure that |Rbc|,|Rcb|≤5 and |Rcc|≤8.

We are left with constructing Rcc. If Scc=∅, then we take Rcc=∅ and conclude. In the remaining case, Scc is non-empty, so both Quo(A1) and Quo(A2) are cliques.

See Figure 1 for an illustration.

Lemma 7 allows us to easily dominate subsets of Scc that do not contain any butterflies:

If there is no butterfly at all, then we apply Claim 2 to T=Scc, obtaining vertices a1,a2 and set Rcc={a1,a2}. Thus, we are left with the case where at least one butterfly exists.

Let xy be a butterfly with inclusion-wise minimal set

Let T\coloneqqScc∖N[R′]. We claim the following:

We now prove the following statement which, together with Theorem 3 and Lemma 6, immediately implies Theorem 4.

Let D⊆cc(G−Ω) be an inclusion-wise minimal set of components of G−Ω such that for every nonedge uv in Ω there exists a component D∈D that covers uv.

If D=∅, then Ω is a clique in G and thus we can put Ω′={v} and D′=∅ for an arbitrary v∈Ω. Otherwise, pick any D∈D. By the minimality of D, there exists a nonedge uv in Ω that is covered by D and by no other component of D∖{D}.

In the remaining case, pick arbitrary components Dv∈D∖{D} with v∈N(Dv) and Du∈D∖{D} with u∈N(Du). Since D is the only component of D that covers uv, we have u∉N(Dv) and v∉N(Du); in particular, Du≠Dv. We claim that we can set Ω′={u,v} and D′={D,Du,Dv}. That is, we claim that

In this section we discuss two examples showing tightness of the statement of Theorem 3: we show that it cannot be generalized to P8-free graphs and that a small dominating set of a minimal separator may need to contain elements of the said separator. The examples are modifications of a corresponding example presented in the conclusions of [16].

First, note that for every v∈V(G), |N[v]∩S|=1. Thus, any set dominating S has to contain at least n vertices.

Here, let us modify the graph G from the first example by turning S into a clique. Still, S is a minimal separator in G with A1 and A2 being two full components of S.

First, note that for every v∈A1∪A2, we still have |N[v]∩S|=1. Thus, any set dominating S that is disjoint with S has to contain at least n vertices.