Covariate adjustment has the potential to increase power in the analysis of randomised trials, but mis-specification of the adjustment model could cause error. We explore what error is possible when the adjustment model omits a covariate by randomised treatment interaction, in a setting where the covariate is perfectly balanced between randomised treatments. We use mathematical arguments and analyses of single hypothetical data sets. We show that analysis by a generalised linear model with the canonical link function leads to no error under the null – that is, if treatment effect is truly zero under the adjusted model then it is also zero under the unadjusted model. However, using non-canonical link functions does not give this property and leads to potentially important error under the null. The error is present even in large samples and hence constitutes bias. We conclude that covariate adjustment analyses of randomised trials should avoid non-canonical links. If a marginal risk difference is the target of estimation then this should not be estimated using an identity link; alternative preferable methods include standardisation and inverse probability of treatment weighting. 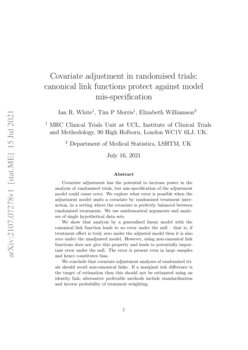 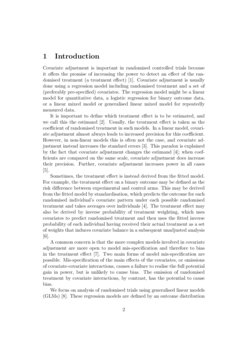 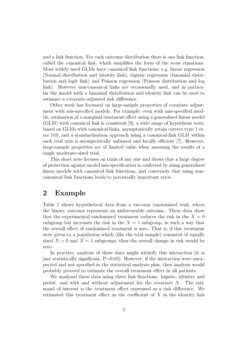 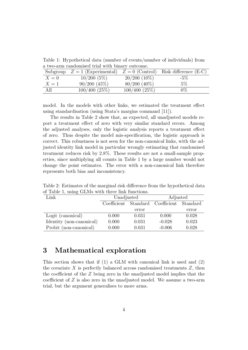 Historical data about disease outcomes can be integrated into the analys...
David Walsh, et al. ∙

We often seek to estimate the causal effect of an exposure on a particul...
Stephen A. Lauer, et al. ∙

Planning a method for covariate adjustment in individually-randomised trials: a practical guide

It is important to define which treatment effect is to be estimated, and we call this the estimand [2]

A common concern is that the more complex models involved in covariate adjustment are more open to model mis-specification and therefore to bias in the treatment effect [7]. Two main forms of model mis-specification are possible. Mis-specification of the main effects of the covariates, or omissions of covariate-covariate interactions, causes a failure to realise the full potential gain in power, but is unlikely to cause bias. The omission of randomised treatment by covariate interactions, by contrast, has the potential to cause bias.

Other work has focussed on large-sample properties of covariate adjustment with mis-specified models. For example, even with mis-specified models, estimation of a marginal treatment effect using a generalised linear model (GLM) with canonical link is consistent [9]; a wide range of hypothesis tests, based on GLMs with canonical links, asymptotically retain correct type 1 error [10]; and a standardisation approach using a canonical-link GLM within each trial arm is asymptotically unbiased and locally efficient [7]. However, large-sample properties are of limited value when assessing the results of a single moderate-sized trial.

Table 1 shows hypothetical data from a two-arm randomised trial, where the binary outcome represents an unfavourable outcome. These data show that the experimental randomised treatment reduces the risk in the X=0 subgroup but increases the risk in the X=1 subgroup, in such a way that the overall effect of randomised treatment is zero. That is, if this treatment were given to a population which (like the trial sample) consisted of equally sized X=0 and X=1 subgroups, then the overall change in risk would be zero.

In practice, analysis of these data might identify this interaction (it is just statistically significant, P=0.03). However, if the interaction were unexpected and not specified in the statistical analysis plan, then analysis would probably proceed to estimate the overall treatment effect in all patients.

The results in Table 2 show that, as expected, all unadjusted models report a treatment effect of zero with very similar standard errors. Among the adjusted analyses, only the logistic analysis reports a treatment effect of zero. Thus despite the model mis-specification, the logistic approach is correct. This robustness is not seen for the non-canonical links, with the adjusted identity link model in particular wrongly estimating that randomised treatment reduces risk by 2.8%. These results are not a small-sample properties, since multiplying all counts in Table 1 by a large number would not change the point estimates. The error with a non-canonical link therefore represents both bias and inconsistency.

This section shows that if (1) a GLM with canonical link is used and (2) the covariate X is perfectly balanced across randomised treatments Z, then the coefficient of the Z being zero in the unadjusted model implies that the coefficient of Z is also zero in the unadjusted model. We assume a two-arm trial, but the argument generalises to more arms.

We write the unadjusted and adjusted analysis models as

where h(.) is the inverse link function and Y is the outcome.

where (xi,zi,yi) are the values of (X,Z,Y) for the ith individual, i=1…n. However, rather than estimating γ, we will show that the result holds for any given value of γ (and hence that it holds for the value ^γ). By fixing γ we only need to solve the first two components of equation (4).

We assume that the unadjusted treatment effect is zero: that is, equation (3) has a solution with β∗=0. This means that

We then show that whatever the value of γ in model (2), the value β=0 solves the first two components of equation (4). The assumption of perfect balance implies that the average of h(α+γxi) in the zi=1 subgroup is the same as its average across all individuals. Let this average be ¯h(α,γ). We can therefore write the adjusted model score as

This shows that values (α∗,β∗) satisfying h(α∗)=¯h(α,γ) and β∗=0 solve equation (3). These values exist for any link function that is continuous and monotonic. Hence the adjusted treatment effect is also zero.

We explored data sets like that in Section 2, with the same marginal distribution of X and Z, but varying the numbers of positive outcomes in each cell from 10 to 20 in steps of 2. This yielded 64 data sets. We analysed each data set using identity, log and logit links, unadjusted and adjusted for the covariate X. To explore the impact of adjustment on the model coefficients, we did not perform the standardisation step in Section 2: coefficients are therefore not comparable between the different link functions. Unadjusted and adjusted coefficients are also not comparable for the logit link, though the latter difference tends to be small.

We have shown that canonical link functions provide special protection against error due to interactions when generalised linear models are fitted to randomised trial data.

It could be argued that the magnitudes of error that we have shown with non-canonical links – for example, 3 percentage points on the risk difference – are unimportant. The error would be larger if the interaction were larger. Here it could be argued that large interactions would always be detected. However, there is an intermediate area where interactions are not statistically convincing and error remains of an important magnitude. Further, in small data sets, even large interactions may be not statistically significant and hence may not be believed, and here error in covariate adjustment without a canonical link could be large. We have not done a simulation study to demonstrate bias across many data sets, but nevertheless we have shown that these errors would arise in large samples and do constitute bias.

Fortunately there is a simple way to avoid bias, and that is to use canonical links. This means that for binary outcome data, estimation of the risk difference with covariate adjustment should not be done by directly fitting an identity-link binomial regression model, which has a non-canonical link. A good alternative is to model the data using a canonical-link GLM and performing post-estimation standardisation, as we did in Section 2. Another alternative is to use inverse probability of treatment weighting in a simple canonical-link GLM. A separate paper more fully describes these approaches and their advantages and disadvantages [13].

We have focussed on the case of perfect covariate balance. This has allowed us to focus on evaluating adjusted estimates when the unadjusted estimate is zero. Perfect covariate balance can realistically be achieved in trials with a small number of categorical covariates, provided the sample size is an exact multiple of the randomised block length, but it cannot be achieved in trials with continuous covariates. Our findings about the superiority of canonical links are likely to hold in trials that do not have perfect covariate balance, and this could be explored using simulation. However, some bias may still occur with canonical links. In other unpublished work, we have observed that covariate adjustment with a severely mis-specified model and a continuous covariate can led to small-sample bias, though not to large-sample bias.

The implications of this work for analysis of time-to-event outcomes are unclear, since such outcomes are usually analysed by Cox models which are not in the GLM family. It could be that the close link of Cox models with canonical-link Poisson regression provides reassurance of robustness against model mis-specification.

We conclude that non-canonical links should be avoided for covariate adjustment in randomised trials. If a marginal risk difference is the target of estimation, then this should be estimated using logistic regression with standardisation or inverse probability of treatment weighting.

IRW and TPM were supported by the Medical Research Council Unit Programme number MC_UU_12023/21. EJW was supported by the MRC Network of Hubs for Trials Methodology HTMR Award MR/L004933/2/N96 and MRC project grant MR/S01442X/1. We thank Brennan Kahan and Tim Clark for the encouragement to write this work up and Kelly van Lancker for helpful advice.