Fix a positive integer N. Select an additive composition ξ of N uniformly out of 2^N-1 possibilities. The interplay between the number of parts in ξ and the maximum part in ξ is our focus. It is not surprising that correlations ρ(N) between these quantities are negative; we earlier gave inconclusive evidence that lim_N →∞ρ(N) is strictly less than zero. A proof of this result would imply asymptotic dependence. We now retract our presumption in such an unforeseen outcome. Similar experimental findings apply when ξ is a 1-free composition, i.e., possessing only parts ≥ 2. 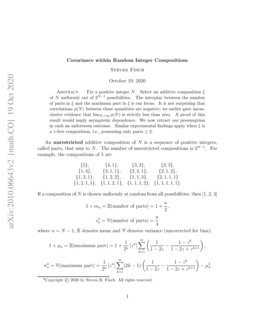 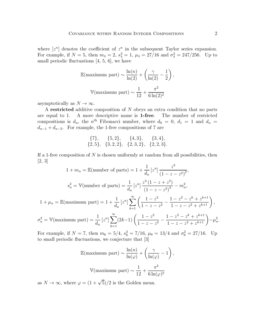 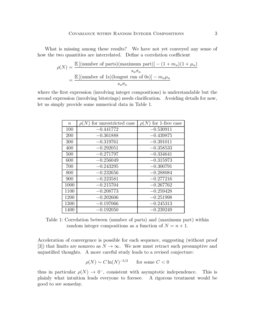 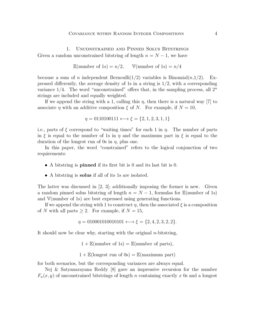 A Note on Tournaments and Negative Dependence

A Construction of Zero-Difference Functions

We introduce a family of block-additive automatic sequences, that are ob...
Irène Marcovici, et al. ∙

How Relevant Are Chess Composition Conventions?

Given a random unconstrained bitstring of length n=N−1, we have

because a sum of n independent Bernoulli(1/2) variables is Binomial(n,1/2).  Expressed differently, the average density of 1s in a string is 1/2, with a corresponding variance 1/4.  The word “unconstrained” offers that, in the sampling process, all 2n strings are included and equally weighted.

If we append the string with a 1, calling this η, then there is a natural way [7] to associate η with an additive composition ξ of N.  For example, if N=10,

In this paper, the word “constrained” refers to the logical conjunction of two requirements:

The latter was discussed in [2, 3]; additionally imposing the former is new.  Given a random pinned solus bitstring of length n=N−1, formulas for E(number of 1s) and V(number of 1s) are best expressed using generating functions.

If we append the string with 1 to construct η, then the associated ξ is a composition of N with all parts ≥2.  For example, if N=15,

It should now be clear why, starting with the original n-bitstring,

for both scenarios, but the corresponding variances are always equal.

By a similar argument, we deduce the number Gn(x,y) of pinned solus bitstrings of length n containing exactly x 0s and a longest run of exactly y 0s.  The recursion is identical to before (with F replaced by G) but possesses different initial conditions

Consequently, the numerator of E[(number of 1s)(longest run of 0s)] under constraints is

equivalently, the numerator of E[(number of parts)(maximum part)] under restrictions is

upon addition.  This proof of the recurrence for Fn(x,y) appeared in [8].

From formula (1) in the preceding,

which gives a recurrence underlying what we called ~Fn(x,y) in [3].

Let us turn attention to various boundary conditions.  For either unconstrained or solus strings,

if n is odd, then

if n is even, then

For completeness’ sake, we give the analog of Table 1 for pinned and solus strings.

Table 2: Correlation between (number of 1s) and (longest run of 0s) within random bitstrings as a function of n.

R, Mathematica and Maple have been useful throughout. I am grateful to Ernst Joachim Weniger, Claude Brezinski and Jan Mangaldan for very helpful discussions about convergence acceleration.  Dr. Weniger’s software code and numerical computations were especially appreciated.