In this paper, we consider the numerical approximation of the quasi-static, linear Biot model in a 3D domain Ω when the right-hand side of the mass balance equation is concentrated on a 1D line source δ_Λ. This model is of interest in the context of medicine, where it can be used to model flow and deformation through vascularized tissue. The model itself is challenging to approximate as the line source induces the pressure and flux solution to be singular. To overcome this, we here combine two methods: (i) a fixed-stress splitting scheme to decouple the flow and mechanics equations and (ii) a singularity removal method for the pressure and flux variables. The singularity removal is based on a splitting of the solution into a lower regularity term capturing the solution singularities, and a higher regularity term denoted the remainder. With this in hand, the flow equations can now be reformulated so that they are posed with respect to the remainder terms. The reformulated system is then approximated using the fixed-stress splitting scheme. Finally, we conclude by showing the results for a test case relevant for flow through vascularized tissue. This numerical method is found to converge optimally. 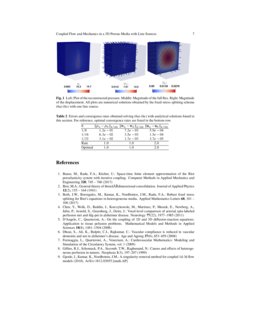 The fixed-stress splitting scheme for Biot's equations as a modified Richardson iteration: Implications for optimal convergence

The fixed-stress splitting scheme is a popular method for iteratively so...
Erlend Storvik, et al. ∙

This work is concerned with the iterative solution of systems of quasi-s...
Qingguo Hong, et al. ∙

We study the elliptic equation with a line Dirac delta function as the s...
Hengguang Li, et al. ∙

Physics-informed deep learning for flow and deformation in poroelastic media

A meshless method for the solution of incompressible flow equations

This article reports on the efficiency of a co-located diffuse approxima...
Stéphane Couturier, et al. ∙

The coupling of mechanics and flow in porous media is relevant for a wide range of applications, occurring for instance in geophysics bause ; erlend and medicine simula ; Nagashima1987BiomechanicsOH . We put forward a model relevant for simulating perfusion, i.e., blood flow, and deformation in vascularized tissue. This problem is of high interest in the context of medicine, as clinical measurements of perfusion provide important indicators for e.g. Alzheimer’s disease Chen1977 ; IturriaMedina2016 , stroke Markus353 and cancer Gillies1999 . Moreover, both the tissue and blood vessels are elastic, and these properties constitute another valuable clinical indicator. Vascular compliance, as one example, is reduced in cases of vascular dementia, but not in cases Alzheimer’s disease brain5 .

We consider the fully coupled quasi-static, linear Biot system biot1 , modeling a poroelastic media when the source term in the flow equation is concentrated on Λ. Let Ω⊂R3 denote a bounded open 3D domain with smooth boundary ∂Ω and Λ=∑ni=1Λi a collection of straight line segments Λi⊂R⊂Ω embedded in Ω. The equations on the space-time domain Ω×(0,T) read:

where u denotes the displacement, εε(u)=12(∇u+∇uT)

M the Biot modulus, μ and λ are Lamé parameters, f∈L2(Ω) the contribution from body forces and a source term ψ∈L2(Ω). We assume M,α,μ,λ∈L∞(Ω) to be strictly positive and uniformly bounded and ρf∈R, g∈R3. Additionally, κ∈W2,∞(Ω) is assumed scalar-valued, as required by the singularity removal method. For simplicity, we use homogeneous boundary conditions u=0, p=0 on ∂Ω×[0,T] and initial conditions u=u0, p=p0 in Ω×{0}.

The system eq:h1-eq:h3 is made non-standard by a generalized Dirac line source δΛ of intensity f in the right-hand side of eq:mass. The line source is defined mathematically as

Physically, it is introduced to model the mass exchange between the vascular network and the surrounding tissue. This exchange occurs through the capillary blood vessels, which have radii ranging from 5 to 10 micrometer. These blood vessels are too small to be captured as 3D objects in a mesh; instead, they are typically reduced to being one-dimensional line segments, see e.g. 1dmodel1 ; koppl2017 ; Laurino2019 ; ingeborg3 ; vidotto2018 . The system eq:h1-eq:h3 would then be on the same form as the one considered in simula , with the exception that the exchange term is here concentrated on the 1D vascular network.

We take f∈C0(Ω) and focus our attention on the challenges introduced by the line source δΛ. The line source induces p and w to be singular, i.e., they both diverge to infinity on Λ. Consequently, one has p∈L2(Ω) but w∉(L2(Ω))3; the solution is then not regular enough to fit the analytic framework of source22 ; florin . They both prove global convergence for the fixed-stress splitting scheme applied to Biot’s equations. Moreover, these singularities are expensive to resolve numerically, making the solution highly challenging to approximate.

In order to tackle this issue, we here combine two strategies: (i) a fixed-stress splitting scheme that decouples the mechanics equation eq:h1 from the flow equations eq:mass-eq:h3, and (ii) a singularity removal method for the flow equations. For an introduction to the fixed-stress splitting scheme, we refer to the works of Mikelić et al. source22 and Both et al. florin ; for an introduction to the singularity removal method, we refer to our earlier work ingeborg ; ingeborg2 .

In this section, we begin by introducing a splitting method that decomposes p and w into higher and lower regularity terms. Here, the lower regularity terms are given explicitly. The model eq:h1-eq:h3 can be reformulated so that it is given with respect to the higher regularity terms; we refer to this as the singularity removal method. Next, we show how this model can readily be approximated by the fixed-stress splitting scheme.

with ra,i=∥xx−aai∥, rb,i=∥xx−bbi∥, Li=∥bbi−aai∥ and γγi=bbi−aaiLi as the normalized tangent vector of Λi. Centrally, this function solves −ΔG=δΛ in the appropriate weak sense; i.e., we have:

Having this function in hand, we next formulate the following splitting ansatz:

where ps=fG(xx)κ and ws=−κ∇ps. The terms ps and ws capture the singular part of the solution, and are explicitly given via the function G. This allows pr and wr

to enjoy higher regularity and improved approximation properties. Assume for the moment that the solution

u is given. Inserting the splitting eq:phelp into eq:mass-eq:h3 one finds the following reformulated flow equation:

In the last line we used the product rule to obtain ∇⋅(κ∇fGκ)=Δ(fG)=fΔG+2∇f⋅∇G+(Δf)G along with the relation fΔG=−fδΛ.

The value of the reformulation lies in the fact that ψr can now be expected to belong to L2(Ω). To see this, note that ψ∈L2(Ω) by assumption. G∈L2(Ω) can be shown by straightforward calculation; it follows that ps∈L2(Ω). Finally, one can show that ∇G⋅∇f∈L2(Ω); for verification of this, we refer to the calculations in (ingeborg2, , Sect. 4.2) along with the embedding f∈C0(Ω)⊂H1(Ω).

Let now eq:h1 and eq:mass-reform-eq:h3-reform denote the reformulated Biot equation. As ψr∈L2(Ω), this system fits the analytic framework of florin .

Next, we show how the reformulated Biot equations eq:h1 and eq:mass-reform-eq:h3-reform can be approximated via the fixed-stress splitting scheme from florin . Let Th be the triangularization of the domain Ω with mesh size h. We let 0=t0<⋯<tN=T be a partition of the time interval (0,T) with N∈N∗ and define a constant time step size τ=tk+1−tk:=T/N for k≥0. To discretize the system, we employ backward Euler for time and a finite element method for space. The solutions are approximated with linear piecewise polynomials, constant piecewise polynomials and lowest-order Raviart-Thomas spaces for the displacement, pressure and flux, respectively. The discrete spaces are given by:

with P1 and P0 as the linear and constant piecewise polynomials.

Take now ⟨⋅,⋅⟩ to be the L2(Ω)-inner product and (u0h,p0h,w0h)∈Vh×Qh×Zh to be the initial values of the solution. We assume the solution of the displacement, pressure and flux is known for the previous time step. The time-discretization of eq:h1 and eq:mass-reform-eq:h3-reform then reads:

The idea of the fixed-stress splitting scheme is to decouple the flow and mechanics equation while keeping an artificial volumetric stress σβ=σ0+Kdr∇⋅u−αp constant. Here, Kdr∈L∞(Ω) is referred to as the drained bulk modulus. We consider the theoretically optimal tuning parameter βFS=α2/Kdr with Kdr=d2(μ+λ) florin . We define a sequence (un,ih, pn,ir,h, wn,ir,h), i≥0. Let i denote the current iteration step and i−1 denote the previous iteration step. Then initialize u, pr and wr by un,0h=un−1h, pn,0r,h=pn−1r,h and wn,0r,h=wn−1r,h, respectively. The algorithm iterates until a stopping criterion is reached. The full scheme reads: Step 1: Given (un,i−1h, pn,i−1r,h, wn,i−1r,h)∈Vh×Qh×Zh. Find (pn,ih, wn,ih)∈Qh×Zh such that ∀(qh, zh)∈Qh×Zh:

In this section, we provide numerical convergence results for a test case using parameters relevant for flow through vascularized tissue. Let the medium of consideration be an isotropic, homogeneous porous medium and κ a positive scalar quantity. We let (pir,h,wir,h,uih) be the solutions at iteration step i and (pi−1r,h, wi−1r,h, ui−1h) the solutions at the previous iteration step i−1. The procedure stops when reaching the following criterion:

where ϵa,ϵr>0 are given tolerances (see Table 1).

Let Ω={(0,1)×(0,1)×(0,1)⊂R3} be a cube discretized by 1/h×1/h×1/h tetrahedrons. The numerical results are obtained by the fixed-stress splitting scheme proposed in Sect. 2.2 and the programming platform FEniCS LoggMardalEtAl2012a . Convergence is tested against the following analytic solutions

Table 2 shows the error and convergence rates obtained using the parameters listed in Table 1. The singularity removal based fixed-stress splitting scheme is seen to converge optimally for each variable uh, ph, and wh. The plots for this problem are illustrated in Fig. 1. The figure includes the plot of the full pressure, the magnitude of the full flux and the magnitude of the displacement, accordingly.