In this paper, we address the problem of counting integer points in a rational polytope described by P(y) = { x ∈R^m Ax = y, x ≥ 0}, where A is an n × m integer matrix and y is an n-dimensional integer vector. We study the Z-transformation approach initiated by Brion-Vergne, Beck, and Lasserre-Zeron from the numerical analysis point of view, and obtain a new algorithm on this problem: If A is nonnegative, then the number of integer points in P(y) can be computed in O(poly (n,m, y_∞) (y_∞ + 1)^n) time and O(poly (n,m, y_∞)) space.This improves, in terms of space complexity, a naive DP algorithm with O((y_∞ + 1)^n)-size DP table. Our result is based on the standard error analysis to the numerical contour integration for the inverse Z-transform, and establish a new type of an inclusion-exclusion formula for integer points in P(y). We apply our result to hypergraph b-matching, and obtain a O(poly( n,m,b_∞) (b_∞ +1)^(1-1/k)n) time algorithm for counting b-matchings in a k-partite hypergraph with n vertices and m hyperedges. This result is viewed as a b-matching generalization of the classical result by Ryser for k=2 and its multipartite extension by Björklund-Husfeldt. 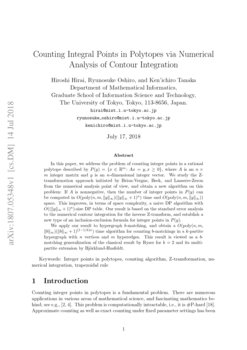 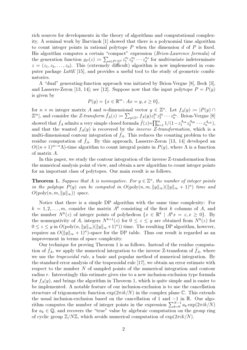 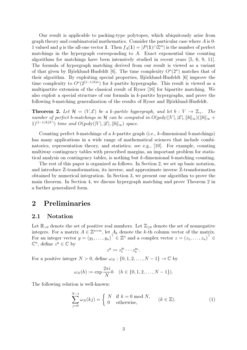 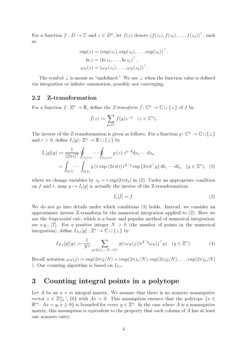 Counting integer points in polytopes is a fundamental problem. There are numerous applications in various areas of mathematical science, and fascinating mathematics behind; see e.g., [2, 4]. This problem is computationally intractable, i.e., it is #P-hard [18]. Approximate counting as well as exact counting under fixed parameter settings has been rich sources for developments in the theory of algorithms and computational complexity. A seminal work by Barvinok [1] showed that there is a polynomial time algorithm to count integer points in rational polytope P when the dimension d of P is fixed. His algorithm computes a certain “compact” expression (Brion-Lawrence formula) of the generation function gP(z)\coloneqq∑a∈P∩Zdza11za22⋯zadd for multivariate indeterminate z=(z1,z2,…,zd). This (extremely difficult) algorithm is now implemented in computer package LattE [15], and provides a useful tool to the study of geometric combinatorics.

for n×m integer matrix A and n-dimensional vector y∈Zn. Let fA(y)\coloneqq|P(y)∩Zm|, and consider the Z-transform ^fA(z)\coloneqq∑y∈ZnfA(y)zy11zy22⋯zynn. Brion-Vergne [8] showed that ^fA admits a very simple closed formula ^f(z)=∏mk=11/(1−zA1k1zA2k2⋯zAnkn), and that the wanted fA(y) is recovered by the inverse Z-transformation, which is a multi-dimensional contour integration of ^fA. This reduces the counting problem to the residue computation of ^fA. By this approach, Lasserre-Zeron [13, 14] developed an O((n+1)m−nΛ)-time algorithm to count integral points in P(y), where Λ is a function of matrix A.

In this paper, we study the contour integration of the inverse Z-transformation from the numerical analysis point of view, and obtain a new algorithm to count integer points for an important class of polytopes. Our main result is as follows.

Suppose that A is nonnegative. For y∈Zn, the number of integer points in the polytope P(y) can be computed in O(poly(n,m,∥y∥∞)(∥y∥∞+1)n) time and O(poly(n,m,∥y∥∞)) space.

Notice that there is a simple DP algorithm with the same time complexity: For k=1,2,…,m, consider the matrix Ak consisting of the first k columns of A, and the number Nk(z) of integer points of polyhedron {x∈Rk∣Akx=z,x≥0}. By the nonnegativity of A, integers Nk+1(z) for 0≤z≤y are obtained from Nk(z) for 0≤z≤y in O(poly(n,∥y∥∞)(∥y∥∞+1)n)) time. The resulting DP algorithm, however, requires an O(∥y∥∞+1)n)-space for the DP table. Thus our result is regarded as an improvement in terms of space complexity.

, we obtain an error estimate with respect to the number

N of sampled points of the numerical integration and contour radius r. Interestingly this estimate gives rise to a new inclusion-exclusion type formula for fA(y), and brings the algorithm in Theorem 1, which is quite simple and is easier to be implemented. A notable feature of our inclusion-exclusion is to use the cancellation structure of trigonometric function exp(2πik/N) in the complex plane C. This extends the usual inclusion-exclusion based on the cancellation of 1 and −1 in R. Our algorithm computes the number of integer points in the expression ∑N−1k=0akexp(2πik/N) for ak∈Q, and recovers the “true” value by algebraic computation on the group ring of cyclic group Z/NZ, which avoids numerical computation of exp(2πik/N).

Our result is applicable to packing-type polytopes, which ubiquitously arise from graph theory and combinatorial mathematics. Consider the particular case where A is 0-1 valued and y is the all-one vector 1. Then fA(1)=|P(1)∩Zm| is the number of perfect matchings in the hypergraph corresponding to A. Exact exponential time counting algorithms for matchings have been intensively studied in recent years [5, 6, 9, 11]. The formula of hypergraph matching derived from our result is viewed as a variant of that given by Björklund-Husfeldt [6]. The time complexity O∗(2n) matches that of their algorithm. By exploiting special properties, Björklund-Husfeldt [6] improve the time complexity to O∗(2(1−1/k)n) for k-partite hypergraphs. This result is viewed as a multipartite extension of the classical result of Ryser [16] for bipartite matching. We also exploit a special structure of our formula in k-partite hypergraphs, and prove the following b-matching generalization of the results of Ryser and Björklund-Husfeldt.

Counting perfect b-matchings of a k-partite graph (i.e., k-dimensional b-matchings) has many applications in a wide range of mathematical sciences that include combinatorics, representation theory, and statistics; see e.g., [10]

The rest of this paper is organized as follows. In Section 2, we set up basic notation, and introduce Z-transformation, its inverse, and approximate inverse Z-transformation obtained by numerical integration. In Section 3, we present our algorithm to prove the main theorem. In Section 4, we discuss hypergraph matching and prove Theorem 2 in a further generalized form.

Let R>0 denote the set of positive real numbers. Let Z≥0 denote the set of nonnegative integers. For a matrix A∈Zn×m, let Ak denote the k-th column vector of the matrix. For an integer vector y=(y1,…,yn)⊤∈Zn and a complex vector z=(z1,…,zn)⊤∈Cn, define zy∈C by

The following relation is well-known:

The symbol ⊥ is meant as “undefined.” We use ⊥ when the function value is defined via integration or infinite summation, possibly not converging.

For a function f:Zn→R, define the Z-transform ^f:Cn→C∪{⊥} of f by

The inverse of the Z-transformation is given as follows. For a function g:Cn→C∪{⊥} and r>0, define Ir[g]:Zn→R∪{⊥} by

where we change variables by zk=rexp(2πitk) in (9). Under an appropriate condition on f and r, map g↦Ir[g] is actually the inverse of the Z-transformation:

Recall notation ωN(j)\coloneqqexp(2πij/N)=(exp(2πj1/N),exp(2πj2/N),\allowbreak…,\allowbreakexp(\allowbreak2πjn/N)\allowbreak). Our counting algorithm is based on IN,r.

3 Counting integral points in a polytope

Let A be an n×m integral matrix. We assume that there is no nonzero nonnegative vector x∈Zm≥0∖{0} with Ax=0. This assumption ensures that the polytope {x∈Rm:Ax=y,x≥0} is bounded for every y∈Zn. In the case where A is a nonnegative matrix, this assumption is equivalent to the property that each column of A has at least one nonzero entry.

As mentioned in the introduction, define function fA:Zn→Z by

Our starting point is the following formula for ^fA.

We establish an approximate version of the above theorem as follows.

From the assumption that A is nonnegative and each column of A has nonzero entry, for z∈Cn with |z1|=|z2|=⋯=|zn|=r>1, it holds A⊤ln|z|=A⊤lnr>0. By the previous theorem, the Z-transform ^fA(z) is given by

where the summations are interchangeable, thanks to the absolute convergence (by r>1). By the relation (3), ∏ml=1∑N−1jl=0ωN(jl(yl−(Ah)l)) is Nn if Ah−y∈NZn≥0, and zero otherwise. Notice that (Ah−y)l≤−N cannot occur since ∥y∥∞<N. Thus we have

This proof is inspired by the standard argument to derive the exponential convergence of the trapezoidal rule applied to periodic functions, where the the cancellation technique using (3) in the proof is known as aliasing in numerical analysis; see [17, Theorem 2.1].

Notice that g(k)\coloneqq|{x∈Zm≥0:y−Ax≥0,1⊤(y−Ax)=k}| is a variant of the Ehrhart (quasi)polynomial, and is bounded by a polynomial in k with degree m−n. Hence the series in (15) actually absolutely converges for r>1.

Here we regard r as an indeterminate.

Our goal is to compute the coefficient of r−1⊤y in (21). Instead of numerical computation of the trigonometric function ωN, we develop an algebraic algorithm. Let Q[Z/NZ] denote the group ring of the cyclic group Z/NZ={0,1,2,…,N−1} of order N. Namely, Q[Z/NZ] consists of polynomials with variable s, rational coefficients, and degree at most N−1, in which the multiplication rule is given by sl⋅sl′=sl+l′modN. Consider the bivariate polynomial ring Q[Z/NZ][t] with variables s,t. Then p(s,t)↦p(ωN(1),t) is a ring homomorphism from Q[Z/NZ][t] to C[t]. Letting t=r−1 and s=ωN(1) in (20), we obtain a polynomial in Q[Z/NZ][t]:

Let d\coloneqq1⊤y. From (21), we first consider the computation of the coefficient bj(s) of td in

for fixed j. It suffices to compute the above polynomial (24) modulo (td+1), which can be written as

Finally we estimate the bit-size required for the computation. It suffices to estimate the size of bj(s), which is the sum of at most (d+m−1d) terms of form sk. Then the coefficients of bj(s) have bit-length O(poly(n,m,N)). Thus the required bit-size is at most poly(n,m,N)nlogN. ∎

where the sum is taken over divisors i<N of N with some coefficient Ki∈Q.

According to this lemma, we obtain a simple algorithm to compute fA(y) from ¯¯¯¯¯¯fA(s) as follows.

The correctness of the algorithm is clear from the above lemma: The chosen index i in step 2 is a divisor of N with ai=Ki. Hence the algorithm computes ¯¯¯¯¯¯fA(s)−∑iKi(1+s1+⋯+sN−i). After at most N iterations, the algorithm terminates and outputs the correct answer fA(y).

Consider the following matrix A and vector y:

Then the polytope {x∈R3:Ax=y,x≥0} has three integer points:

Let us count the integer points according to Corollary 5. The coefficient ¯¯¯¯¯¯fA(s) of t8 in

Consider the following matrix A and vector y:

Then the polytope {x∈R3:Ax=y,x≥0} has only one integer point: