Partially Observable Markov Decision Processes (POMDPs) are rich environments often used in machine learning. But the issue of information and causal structures in POMDPs has been relatively little studied. This paper presents the concepts of equivalent and counterfactually equivalent POMDPs, where agents cannot distinguish which environment they are in though any observations and actions. It shows that any POMDP is counterfactually equivalent, for any finite number of turns, to a deterministic POMDP with all uncertainty concentrated into the initial state. This allows a better understanding of POMDP uncertainty, information, and learning. 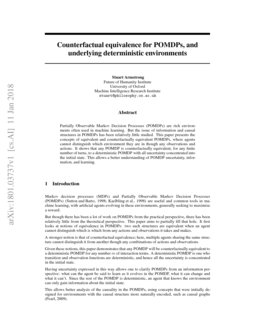 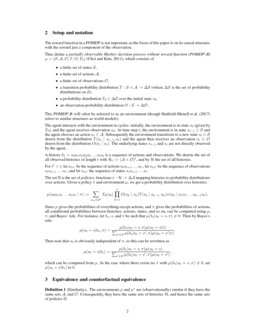 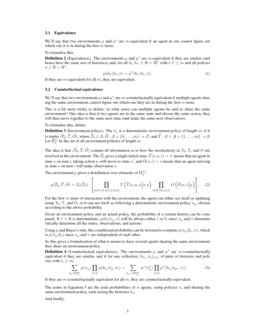 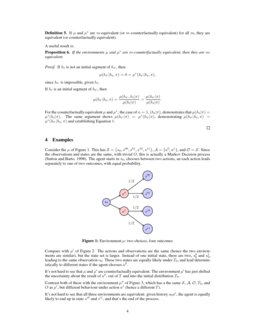 But though there has been a lot of work on POMDPs from the practical perspective, there has been relatively little from the theoretical perspective. This paper aims to partially fill that hole. It first looks at notions of equivalence in POMDPs: two such structures are equivalent when an agent cannot distinguish which is which from any actions and observations it takes and makes.

A stronger notion is that of counterfactual equivalence; here, multiple agents sharing the same structure cannot distinguish it from another though any combinations of actions and observations.

Given these notions, this paper demonstrates that any POMDP will be counterfactually equivalent to a deterministic POMDP for any number m of interaction terms. A deterministic POMDP is one who transition and observation functions are deterministic, and hence all the uncertainty is concentrated in the initial state.

Having uncertainty expressed in this way allows one to clarify POMDPs from an information perspective: what can the agent be said to learn as it evolves in the POMDP, what it can change and what it can’t. Since the rest of the POMDP is deterministic, an agent that knows the environment can only gain information about the initial state.

This allows better analysis of the causality in the POMDPs, using concepts that were initially designed for environments with the causal structure more naturally encoded, such as causal graphs (Pearl, 2009).

The reward function in a POMDP is not important, as the focus of this paper is on its causal structure, with the reward just a component of the observation.

This POMDP∖R will often be referred to as an environment (though Hadfield-Menell et al. (2017) refers to similar structures as world models).

A history ht=o0a1o1\allowbreaka2o2…atot is a sequence of actions and observations. We denote the set of all observed histories of length t with Ht:=(A×O)t, and by H the set of all histories.

Then note that s0 is obviously independent of π, so this can be rewritten as

We’ll say that two environments μ and μ∗ are m-equivalent if an agent in one cannot figure out which one it is in during the first m turns.

To formalise this: [Equivalence] The environments μ and μ∗ are m-equivalent if they are similar (and hence have the same sets of histories), and, for all ht,ht′∈H=H∗ with t,t′≤m and all policies π∈Π=Π∗,

If they are m-equivalent for all m, they are equivalent.

We’ll say that two environments μ and μ∗ are m-counterfactually equivalent if multiple agents sharing the same environment, cannot figure out which one they are in during the first m turns.

This is a bit more tricky to define; in what sense can multiple agents be said to share the same environment? One idea is that if two agents are in the same state and choose the same action, they will then move together to the same next state (and make the same next observation).

The idea is that (ˆT0,ˆT,ˆO) contain all information as to how the stochasticity in T0, T, and O are resolved in the environment. The ˆT0 gives a single initial state, ˆT(s,a,i)=s′ means that an agent in state s on turn i, taking action a, will move to state s′, and ˆO(s,i)=o means that an agent arriving in state s on turn i will make observation o.

The environment μ gives a distribution over elements of Πmμ:

For the first m turns of interaction with the environment, the agent can either see itself as updating using T0, T, and O, or it can see itself as following a deterministic environment policy πμ, chosen according to the above probability.

Given an environment policy and an actual policy, the probability of a certain history can be computed. If π∈Π is deterministic, μ(ht|πμ,π) will be always either 1 or 0, since πμ and π deterministically determine all the states, observations, and actions.

Using μ and Bayes’s rule, this conditional probability can be inverted to compute μ(πμ|ht,π), which is μ(πμ|ht) since πμ and π are independent of each other.

So this gives a formalisation of what it means to have several agents sharing the same environment: they share an environment policy. [Counterfactual equivalence] The environments μ and μ∗ are m-counterfactually equivalent if they are similar, and if for any collection (hti,πi)i≤n of pairs of histories and policies with ti≤m,

A useful result is: If the environments μ and μ∗ are m-counterfactually equivalent, then they are m-equivalent.

since ht′ is impossible, given ht.

Consider the μ of Figure 1. This has S={s0,s00,s01,s10,s11}, A={a0,a1}, and O=S. Since the observations and states are the same, with trivial O, this is actually a Markov Decision process (Sutton and Barto, 1998). The agent starts in s0, chooses between two actions, an each action leads separately to one of two outcomes, with equal probability.

Compare with μ′ of Figure 2. The actions and observations are the same (hence the two environments are similar), but the state set is larger. Instead of one initial state, there are two, s00 and s10, leading to the same observation o0. These two states are equally likely under T0, and lead deterministically to different states if the agent chooses a0.

It’s not hard to see that μ and μ′ are counterfactually equivalent. The environment μ′ has just shifted the uncertainty about the result of a0, out of T and into the initial distribution T0.

Contrast both of these with the environment μ′′ of Figure 3, which has a the same S, A, O, T0, and O as μ′, but different behaviour under action a1 (hence a different T).

It’s not hard to see that all three environments are equivalent: given history o0ai, the agent is equally likely to end up in state si0 and si1, and that’s the end of the process.

They are not, however, counterfactually equivalent. There are four environment policies in μ (and in μ′) of non-zero probability. They can be labeled πij, which sends a0 to s0i and a1 to s1j. Each one has probability 1/4.

There are two environment policies in μ′′ of non-zero probability; they can be labeled πi, which simply chooses the starting state si0. Each one has probability 1/2.

Since there are only two actions and they are only used once, the policies of these environments can be labeled by that action.

Then consider the two pairs of policies and histories (a0,o0a0o00) and (a1,o0a1o11). Under the environment policy π01, both these pairs are certainly possible, so they have an non-zero probability under μ (and μ′). However, (a0,o0a0o00) is impossible under π1, while (a1,o0a1o11) is impossible under π0. So there are no environment policies in μ′′ that make both those histories possible. Thus μ′′ is not counterfactually equivalent to μ and μ′.

In this section, the environment μ∗ is assumed to have all its special features indicated by a ∗ – so it will have state space S∗, transitions function T∗0, and so on.

The main result is: For m and all environments μ, there exists an environment μ∗ that is m-counterfactually equivalent to μ, and on which the transition function T∗, and the observation function O∗, are both deterministic.

We now need to show that μ and μ∗ are m-counterfactually equivalent. The proof is not conceptually difficult, one just has to pay careful attention to the notation.

Together, Equation 4 and Equation 5 give the desired equality of Equation 3: for collections (hti,πi)i≤n of history-policy pairs with ti≤m,

since f is a surjection onto Πmμ.

In the above construction, all the uncertainty and stochasticity of the initial μ has been concentrated into the distribution T∗0 over the initial state s∗0 in μ∗.

Note that though the construction will work for every m, the size of S∗ increases with m, so the limit of this μ∗ as m→∞ has a countable infinite number of states, rather than a finite number.

5.1 ‘Universality’ of the underlying deterministic environment

For many μ, much simpler constructions are possible. See for instance environment μ∗ of Figure 4. It is deterministic in O∗ and T∗, and counterfactually equivalent to μ and μ′ in Section 4. But μ has 5 states and 10 state-action pairs, so there are 5×510 different environment policies222 Though only 4 of non-zero probability. , meaning that S×Π1μ×{0,1} is of magnitude 512×2=488281250, much larger than the 8 states of μ∗.

[Pure learning process] On μ, let P:H≤m→[0,1] be a map from histories of length m or less, to the unit interval. Then P is a pure learning process if there exists a deterministic μ∗, m-counterfactually equivalent to μ, such that P can be expressed as

These pure learning processes are seen to compute a probability over the stochastic elements of the environment. Then the universality result is: Let P be a pure learning process on μ, and let μ∗ be deterministic and m-counterfactually equivalent to μ. Then there exists constants ps∗ for s∈S, such that P can be defined as in Equation 6.

We now need to define the ps∗ on μ∗, and show they generate the same P.

Let Π0⊂Π be the set of deterministic policies. Since μ is deterministic itself, apart from T0, a choice of s0 and a choice of π∈Π0 determines a unique history hm of length m. Therefore each s∈S defines a map fs:Π0→Hm. Define the subset F(fs) as the set of all s′ such that fs=fs′; these subsets form a partition of S.

Since μ∗ is also deterministic, its state space S∗ has a similar partition.

Since everything is deterministic, the expression ∏πi∈Π0μ(fs(πi)|s′,πi) must be either 0 or 1, and it is 1 only if s′∈F(fs). Thus Equation 7 can be further rewritten as

Thus ps∗ for s∗∈F(fs) is equal to the weighted average of ps in F(fs)⊂S. For the s∗ with μ(s∗)=0, set ps∗ to any value. This defines the ps∗, and hence a P∗ on H via Equation 6.

We now need to show that P=P∗. Note first that

Now let ht be a history with t≤m, and π any deterministic policy that, upon given an initial segment ht′<ht, will generate the action at′+1. Thus π is a policy that could allow ht to happen.

That set can be written as a union S(ht)=⋃ht≤fs(π)F(fs). The observation of ht is thus equivalent to s0∈S(ht). Consequently

by Equation 8 and Equation 9.

Thus any deterministic m-counterfactually equivalent environment can be used to define any pure learning process: they are all interchangeable for this purpose.