In this work, we present a novel counter-fitting method which injects antonymy and synonymy constraints into vector space representations in order to improve the vectors' capability for judging semantic similarity. Applying this method to publicly available pre-trained word vectors leads to a new state of the art performance on the SimLex-999 dataset. We also show how the method can be used to tailor the word vector space for the downstream task of dialogue state tracking, resulting in robust improvements across different dialogue domains. 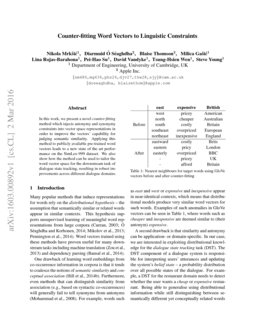 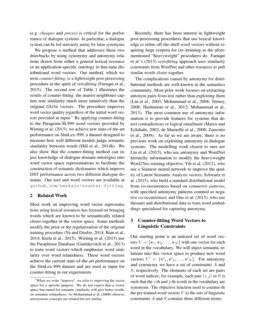 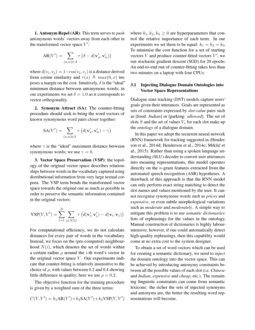 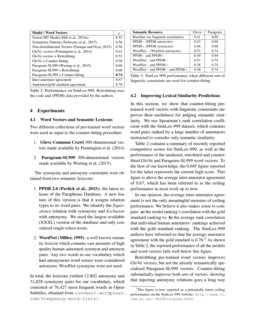 Fuzzy paraphrases in learning word representations with a lexicon

A synonym of a polysemous word is usually only the paraphrase of one sen...
Yuanzhi Ke, et al. ∙

A surprising property of word vectors is that vector algebra can often b...
Kawin Ethayarajh, et al. ∙

One drawback of learning word embeddings from co-occurrence information in corpora is that it tends to coalesce the notions of semantic similarity and conceptual association [Hill et al.2014b]. Furthermore, even methods that can distinguish similarity from association (e.g., based on syntactic co-occurrences) will generally fail to tell synonyms from antonyms [Mohammad et al.2008]. For example, words such as east and west or expensive and inexpensive appear in near-identical contexts, which means that distributional models produce very similar word vectors for such words. Examples of such anomalies in GloVe vectors can be seen in Table 1, where words such as cheaper and inexpensive are deemed similar to (their antonym) expensive.

A second drawback is that similarity and antonymy can be application- or domain-specific. In our case, we are interested in exploiting distributional knowledge for the dialogue state tracking task (DST). The DST component of a dialogue system is responsible for interpreting users’ utterances and updating the system’s belief state

– a probability distribution over all possible states of the dialogue. For example, a DST for the restaurant domain needs to detect whether the user wants a

cheap or expensive restaurant. Being able to generalise using distributional information while still distinguishing between semantically different yet conceptually related words (e.g. cheaper and pricey) is critical for the performance of dialogue systems. In particular, a dialogue system can be led seriously astray by false synonyms.

We propose a method that addresses these two drawbacks by using synonymy and antonymy relations drawn from either a general lexical resource or an application-specific ontology to fine-tune distributional word vectors. Our method, which we term counter-fitting, is a lightweight post-processing procedure in the spirit of retrofitting [Faruqui et al.2015]. The second row of Table 1 illustrates the results of counter-fitting: the nearest neighbours capture true similarity much more intuitively than the original GloVe vectors. The procedure improves word vector quality regardless of the initial word vectors provided as input.111When we write “improve”, we refer to improving the vector space for a specific purpose. We do not expect that a vector space fine-tuned for semantic similarity will give better results on semantic relatedness. As Mohammad et al. Mohammad:EtAl:08 observe, antonymous concepts are related but not similar. By applying counter-fitting to the Paragram-SL999 word vectors provided by Wieting et al. Wieting:15, we achieve new state-of-the-art performance on SimLex-999, a dataset designed to measure how well different models judge semantic similarity between words [Hill et al.2014b]. We also show that the counter-fitting method can inject knowledge of dialogue domain ontologies into word vector space representations to facilitate the construction of semantic dictionaries which improve DST performance across two different dialogue domains. Our tool and word vectors are available at github.com/nmrksic/counter-fitting.

Most work on improving word vector representations using lexical resources has focused on bringing words which are known to be semantically related closer together in the vector space. Some methods modify the prior or the regularization of the original training procedure [Yu and Dredze2014, Bian et al.2014, Kiela et al.2015]. Wieting et al. Wieting:15 use the Paraphrase Database [Ganitkevitch et al.2013] to train word vectors which emphasise word similarity over word relatedness. These word vectors achieve the current state-of-the-art performance on the SimLex-999 dataset and are used as input for counter-fitting in our experiments.

Recently, there has been interest in lightweight post-processing procedures that use lexical knowledge to refine off-the-shelf word vectors without requiring large corpora for (re-)training as the aforementioned “heavyweight” procedures do. Faruqui et al.’s faruqui:15 retrofitting approach uses similarity constraints from WordNet and other resources to pull similar words closer together.

The complications caused by antonymy for distributional methods are well-known in the semantics community. Most prior work focuses on extracting antonym pairs from text rather than exploiting them [Lin et al.2003, Mohammad et al.2008, Turney2008, Hashimoto et al.2012, Mohammad et al.2013]. The most common use of antonymy information is to provide features for systems that detect contradictions or logical entailment [Marcu and Echihabi2002, de Marneffe et al.2008, Zanzotto et al.2009]

. As far as we are aware, there is no previous work on exploiting antonymy in dialogue systems. The modelling work closest to ours are Liu et al. Liu:EtAl:15, who use antonymy and WordNet hierarchy information to modify the heavyweight Word2Vec training objective; Yih et al. Yih:EtAl:12, who use a Siamese neural network to improve the quality of Latent Semantic Analysis vectors; Schwartz et al. schwartz-reichart-rappoport:2015:Conll, who build a standard distributional model from co-occurrences based on

Our starting point is an indexed set of word vectors V={v1,v2,…,vN} with one vector for each word in the vocabulary. We will inject semantic relations into this vector space to produce new word vectors V′={v′1,v′2,…,v′N}. For antonymy and synonymy we have a set of constraints A and S, respectively. The elements of each set are pairs of word indices; for example, each pair (i,j) in S is such that the i-th and j-th words in the vocabulary are synonyms. The objective function used to counter-fit the pre-trained word vectors V to the sets of linguistic constraints A and S contains three different terms:

1. Antonym Repel (AR): This term serves to push antonymous words’ vectors away from each other in the transformed vector space V′:

is a distance derived from cosine similarity and

τ(x)≜max(0,x) imposes a margin on the cost. Intuitively, δ is the “ideal” minimum distance between antonymous words; in our experiments we set δ=1.0 as it corresponds to vector orthogonality.

2. Synonym Attract (SA): The counter-fitting procedure should seek to bring the word vectors of known synonymous word pairs closer together:

where γ is the “ideal” maximum distance between synonymous words; we use γ=0.

For computational efficiency, we do not calculate distances for every pair of words in the vocabulary. Instead, we focus on the (pre-computed) neighbourhood N(i), which denotes the set of words within a certain radius ρ around the i-th word’s vector in the original vector space V. Our experiments indicate that counter-fitting is relatively insensitive to the choice of ρ, with values between 0.2 and 0.4 showing little difference in quality; here we use ρ=0.2.

The objective function for the training procedure is given by a weighted sum of the three terms:

are hyperparameters that control the relative importance of each term. In our experiments we set them to be equal:

k1=k2=k3. To minimise the cost function for a set of starting vectors V and produce counter-fitted vectors V′

, we run stochastic gradient descent (SGD) for 20 epochs. An end-to-end run of counter-fitting takes less than two minutes on a laptop with four CPUs.

Dialogue state tracking (DST) models capture users’ goals given their utterances. Goals are represented as sets of constraints expressed by slot-value pairs such as [food: Indian] or [parking: allowed]. The set of slots S and the set of values Vs for each slot make up the ontology of a dialogue domain.

-gram features extracted from the automated speech recognition (ASR) hypotheses. A drawback of this approach is that the RNN model can only perform exact string matching to detect the slot names and values mentioned by the user. It cannot recognise synonymous words such as

pricey and expensive, or even subtle morphological variations such as moderate and moderately. A simple way to mitigate this problem is to use semantic dictionaries: lists of rephrasings for the values in the ontology. Manual construction of dictionaries is highly labour-intensive; however, if one could automatically detect high-quality rephrasings, then this capability would come at no extra cost to the system designer.

To obtain a set of word vectors which can be used for creating a semantic dictionary, we need to inject the domain ontology into the vector space. This can be achieved by introducing antonymy constraints between all the possible values of each slot (i.e. Chinese and Indian, expensive and cheap

, etc.). The remaining linguistic constraints can come from semantic lexicons: the richer the sets of injected synonyms and antonyms are, the better the resulting word representations will become.

Two different collections of pre-trained word vectors were used as input to the counter-fitting procedure:

The synonymy and antonymy constraints were obtained from two semantic lexicons:

In total, the lexicons yielded 12,802 antonymy and 31,828 synonymy pairs for our vocabulary, which consisted of 76,427 most frequent words in OpenSubtitles, obtained from invokeit.wordpress.com/frequency-word-lists/.

In this section, we show that counter-fitting pre-trained word vectors with linguistic constraints improves their usefulness for judging semantic similarity. We use Spearman’s rank correlation coefficient with the SimLex-999 dataset, which contains word pairs ranked by a large number of annotators instructed to consider only semantic similarity.

Table 2 contains a summary of recently reported competitive scores for SimLex-999, as well as the performance of the unaltered, retrofitted and counter-fitted GloVe and Paragram-SL999 word vectors. To the best of our knowledge, the 0.685 figure reported for the latter represents the current high score. This figure is above the average inter-annotator agreement of 0.67, which has been referred to as the ceiling performance in most work up to now.

Table 3 shows the effect of injecting different categories of linguistic constraints. GloVe vectors benefit from all three sets of constraints, whereas the quality of Paragram vectors, already exposed to PPDB, only improves with the injection of WordNet antonyms. Table 4 illustrates how incorrect similarity predictions based on the original (Paragram) vectors can be fixed through counter-fitting. The table presents eight false synonyms and nine false antonyms: word pairs with predicted rank in the top (bottom) 200 word pairs and gold standard rank 500 or more positions lower (higher). Eight of these errors are fixed by counter-fitting: the difference between predicted and gold-standard ranks is now 100 or less. Interestingly, five of the eight corrected word pairs do not appear in the sets of linguistic constraints; these are indicated by double ticks in the table. This shows that secondary (i.e. indirect) interactions through the three terms of the cost function do contribute to the semantic content of the transformed vector space.

We used four different sets of word vectors to construct semantic dictionaries: the original GloVe and Paragram-SL999 vectors, as well as versions counter-fitted to each domain ontology. The constraints used for counter-fitting were all those from the previous section as well as antonymy constraints among the set of values for each slot. We treated all vocabulary words within some radius t of a slot value as rephrasings of that value. The optimal value of t was determined using a grid search: we generated a dictionary and trained a model for each potential t, then evaluated on the development set. Table 6 shows the performance of RNN models which used the constructed dictionaries. The dictionaries induced from the pre-trained vectors substantially improved tracking performance over the baselines (which used no semantic dictionaries). The dictionaries created using the counter-fitted vectors improved performance even further. Contrary to the SimLex-999 experiments, starting from the Paragram vectors did not lead to superior performance, which shows that injecting the application-specific ontology is at least as important as the quality of the initial word vectors.

We have presented a novel counter-fitting

We would like to thank Felix Hill for help with the SimLex-999 evaluation. We also thank the anonymous reviewers for their helpful suggestions.