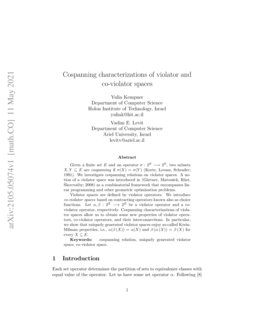 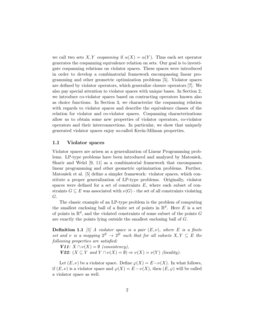 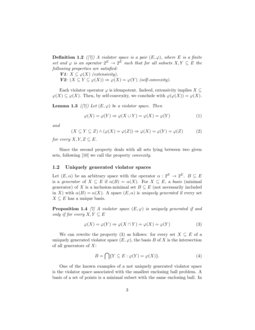 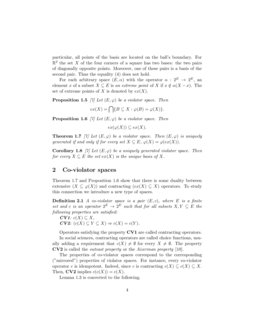 A Pseudo-Inverse for Nonlinear Operators

Violator spaces are arisen as a generalization of Linear Programming problems. LP-type problems have been introduced and analyzed by Matoušek, Sharir and Welzl [9, 11] as a combinatorial framework that encompasses linear programming and other geometric optimization problems. Further, Matoušek et al. [5] define a simpler framework: violator spaces, which constitute a proper generalization of LP-type problems. Originally, violator spaces were defined for a set of constraints E, where each subset of constraints G⊆E was associated with ν(G) - the set of all constraints violating G.

[5] A violator space is a pair (E,ν), where E is a finite set and ν is a mapping 2E→2E such that for all subsets X,Y⊆E the following properties are satisfied:

([7]) A violator space is a pair (E,φ), where E is a finite set and φ is an operator 2E→2E such that for all subsets X,Y⊆E the following properties are satisfied:

Since the second property deals with all sets lying between two given sets, following [10] we call the property convexity.

[7] A violator space (E,φ) is uniquely generated if and only if for every X,Y⊆E

We can rewrite the property (3) as follows: for every set X⊆E of a uniquely generated violator space (E,φ), the basis B of X is the intersection of all generators of X:

One of the known examples of a not uniquely generated violator space is the violator space associated with the smallest enclosing ball problem. A basis of a set of points is a minimal subset with the same enclosing ball. In particular, all points of the basis are located on the ball’s boundary. For R2 the set X of the four corners of a square has two bases: the two pairs of diagonally opposite points. Moreover, one of these pairs is a basis of the second pair. Thus the equality (4) does not hold.

For each arbitrary space (E,α) with the operator α:2E→2E, an element x of a subset X⊆E is an extreme point of X if x∉α(X−x). The set of extreme points of X is denoted by ex(X).

[7] Let (E,φ) be a uniquely generated violator space. Then for every X⊆E the set ex(X) is the unique basis of X.

Theorem 1.7 and Proposition 1.6 show that there is some duality between extensive (X⊆φ(X)) and contracting (ex(X)⊆X) operators. To study this connection we introduce a new type of spaces.

A co-violator space is a pair (E,c), where E is a finite set and c is an operator 2E→2E such that for all subsets X,Y⊆E the following properties are satisfied:

In social sciences, contracting operators are called choice functions, usually adding a requirement that c(X)≠∅ for every X≠∅. The property CV2 is called the outcast property or the Aizerman property [10].

Lemma 1.3 is converted to the following.

Let (E,c) be a co-violator space. Then

It is easy to see that all the properties of violator spaces hold in their dual interpretation for co-violator spaces. Since a co-violator operator is a choice function with outcast properties, the connection between these two types of spaces may result in better understanding of two theories and in new findings in each of them.

Connections between contracting and extensive operators were studied in many works, while most of them were dedicated to connections between choice functions and closure operators [1, 3, 10]. Naturally, extreme point operators were considered as choice functions. But, as we will see in Proposition 3.9, the extreme point operator of a violator space satisfies the outcast property, and so it forms a co-violator space, if and only if the violator space is uniquely generated. We also consider choice functions investigated in [4]. The interior operator (well-known in topology) is dual to a closure operator. Given an extensive operator φ:2E→2E, one can get a contracting operator c: c(X)=E−φ(E−X) or ¯¯¯¯¯¯¯¯¯¯¯c(X)=φ(¯¯¯¯¯X).

Proof. It is easy to see that φ is an extensive operator if and only if c is a contracting operator. To prove that c satisfies the outcast property if and only if φ is self-convex one has just to pay attention that:

Let E be a finite set and R⊆2E×2E be an equivalence relation on 2E. Then R is the cospanning relation of a violator space if and only if the following properties hold for every X,Y,Z⊆E:

Let us define an operator φ and prove that it satisfies extensivity and self-convexity. Since R is an equivalence relation, it defines a partition of 2E. Then, for each X⊆E there is only one class containing X. Thus for every set X, we define φ(X) as a maximal element in the class [X]R. Notice, that the property R1 implies that each equivalence class has a unique maximal element, so the partition is well-defined. Hence, we obtain that X⊆φ(X) and φ(φ(X))=φ(X). Then the self-convexity follows immediately from R2. It is easy to see that the cospanning relation w.r.t. φ coincides with R.

In conclusion, each equivalence class of the cospanning relation of a violator space is closed under union (R1) and convex (R2).

Let E be a finite set and R⊆2E×2E be an equivalence relation on 2E. Then R is the cospanning relation of a co-violator space if and only if the following properties hold for every X,Y,Z⊆E:

Proof. Necessity follows immediately from Lemma 2.2. By analogy with the proof of Theorem 3.2 we define c(X) to be a minimal element in the class [X]R. Since each class is closed under intersection (R3), the partition is well-defined. It is easy to see that operator c is contracting, satisfies the outcast property, and its cospanning relation coincides with R.

(ii) Every hypercube partition is the partition P of H(E) into equivalence classes of a uniquely generated violator space.

Let us consider now a uniquely generated violator space (E,φ) and the operator ex. Since each equivalence class [A]φ w.r.t. operator φ is an interval [ex(A),φ(A)], we can see that for each X∈[ex(A),φ(A)] not only φ(X)=φ(A), but ex(X)=ex(A) as well. Since P is a hypercube partition of H(E) we conclude with [X]φ=[X]ex. Thus the cospanning partition (quotient set) associated with an operator φ coincides with the cospanning partition associated with a contracting operator ex. Since ex(X) is a minimal element of [X] we immediately obtain the following

If (E,φ) is a uniquely generated violator space, then operator ex satisfies the following properties:

If (E,φ) is not a uniquely generated violator space, then the operator ex may or may not satisfy the properties X1-X4. Consider the two following examples.

Let (E,φ) be a violator space. The following assertions are equivalent:

(i) (E,φ) is uniquely generated

Before we continue with the proof, it is important to mention that from the definition of the operator ex it follows that ex(B)=B for each basis B.

It is worth reminding that X6 and X7 are called Krein-Milman properties. In other words, every uniquely generated violator space is a Krein-Milman space [6].