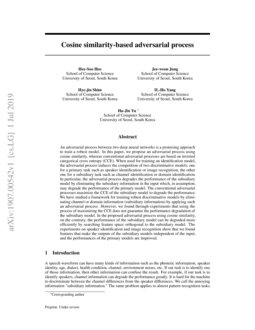 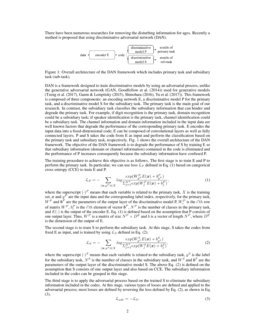 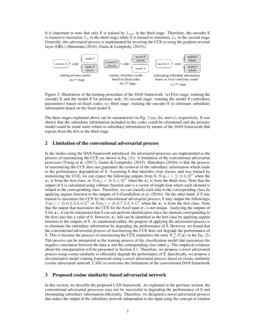 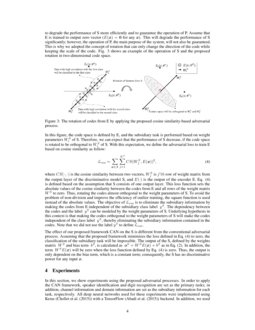 A speech waveform can have many kinds of information such as the phonetic information, speaker identity, age, dialect, health condition, channel, environment noises, etc. If our task is to identify one of those information, then other information can confuse the result. For example, if our task is to identify speakers, channel information can degrade the performance greatly. It is hard for the machine to discriminate between the channel differences from the speaker differences. We call the annoying information "subsidiary information." The same problem applies to almost pattern recognition tasks. There have been numerous researches for removing the disturbing information for ages. Recently a method is proposed that using discriminative adversarial network (DAN).

The training procedure to achieve this objective is as follows. The first stage is to train E and P to perform the primary task. In particular, we can use loss LP defined in Eq. (1) based on categorical cross entropy (CCE) to train E and P.

where the superscript (⋅)P means that each variable is related to the primary task, X is the training set, x and yP are the input data and the corresponding label index, respectively, for the primary task, WP and bP are the parameters of the output layer of the discriminative model P, WPi is the i′th row of matrix WP, bPi is the i′th

bP, NP is the number of classes in the primary task, and E(⋅) is the output of the encoder E. Eq. (1) is defined based on the assumption that P consists of one output layer. Thus, WP is a matrix of size NP×DE and b is a vector of length NP, where DE is the dimension of the output of E.

The second stage is to train S to perform the subsidiary task. At this stage, S takes the codes from fixed E as input, and is trained by using LS defined in Eq. (2).

The three stages explained above can be summarized via Fig. 2-(a), (b), and (c), respectively. It was shown that the subsidiary information included in the codes could be eliminated and the primary model could be made more robust to subsidiary information by means of the DAN framework that repeats from the first to the third stage.

2 Limitation of the conventional adversarial process

In the studies using the DAN framework introduced, the adversarial processes are implemented as the process of maximizing the CCE (as shown in Eq. (3)). A limitation of the conventional adversarial processes (Tzeng et al. (2017), Ganin & Lempitsky (2015), Shinohara (2016)) is that the process of maximizing the CCE does not guarantee the removal of the subsidiary information which leads to the performance degradation of S. Assuming S that identifies four classes and was trained by minimizing the CCE, we can expect the following outputs from S; S(x1)=[1,0,0,0]T when the x1 is from the first class, or S(x2)=[0,0,1,0]T when the x2 is from the third class. Note that the output of S is calculated using softmax function and is a vector of length four where each element is related to the corresponding class. Therefore, we can classify each data to the corresponding class by applying argmax function to the outputs of S (Goodfellow et al. (2016)). On the other hand, if S was trained to maximize the CCE by the conventional adversarial process, S may output the followings; S(x1)=[0,0.2,0.3,0.5]T or S(x1)=[0,0.7,0.2,0.1]T when the x1 is from the first class. Note that the output that maximizes the CCE for the fixed input x1 is not unique. Analyzing the outputs of S for x1, it can be interpreted that S can not perform identification since the element corresponding to the first class has a value of 0. However, x1 still can be identified as the first class by applying argmin function to the outputs of S. As mentioned earlier, the purpose of applying the adversarial process is to eliminate the subsidiary information by degrading the performance of S. However, we found that the conventional adversarial process of maximizing the CCE does not degrade the performance of S. This is because the process of maximizing the CCE minimizes the term WSySE(x) in the Eq. (2). This process can be interpreted as the training process of the classification model that maximizes the negative correlation between the data x and the corresponding class label y. The empirical evidence about this interpretation will be presented in Section 4.1. Therefore, we propose a novel adversarial process using cosine similarity to efficiently degrade the performance of S. Specifically, we propose a discriminative model training framework using a novel adversarial process based on cosine similarity (cosine adversarial network, CAN) to overcome the limitations of the conventional DAN framework.

In this section, we describe the proposed CAN framework. As explained in the previous section, the conventional adversarial processes may not be successful in degrading the performance of S and eliminating subsidiary information efficiently. Therefore, we designed a novel adversarial process that makes the output of the subsidiary network independent to the input using the concept of rotation to degrade the performance of S more efficiently and to guarantee the operation of P. Assume that E is trained to output zero vector (E(x)=0 for any x). This will degrade the performance of S significantly; however, the operation of P, the main purpose of the system, will not also be guaranteed. This is why we adopted the concept of rotation that can only change the direction of the code while keeping the scale of the code. Fig. 3 shows an example of the operation of S and the proposed rotation in two-dimensional code space.

In this figure, the code space is defined by E, and the subsidiary task is performed based on weight parameters WSi of S. Therefore, we can expect that the performance of S decrease, if the code space is rotated to be orthogonal to WSi of S. With this expectation, we define the adversarial loss to train E based on cosine similarity as follow:

where CS(⋅,⋅) is the cosine similarity between two vectors, WSj is j′th row of weight matrix from the output layer of the discriminative model S, and E(⋅)

is the output of the encoder E. Eq. (4) is defined based on the assumption that S consists of one output layer. This loss function sets the absolute values of the cosine similarity between the codes from E and all rows of the weight matrix

to zero. Thus, rotating the codes almost orthogonal to the weight parameters of S. To avoid the problem of non-division and improve the efficiency of outlier training, the square function is used instead of the absolute values. The objective of

The effect of our proposed framework CAN on the S is different from the conventional adversarial process. Assuming that the proposed framework minimizes the loss defined in Eq. (4) to zero, the classification of the subsidiary task will be impossible. The output of the S, defined by the weights matrix  WS and bias term  bS, is calculated as  oS=WSE(x)+bS as in Eq. (2). In addition, the term  WSE(x) will be zero when the loss function defined by Eq. (4) is zero. Thus, the output is only dependent on the bias term, which is a constant term; consequently, the S has no discriminative power for any input x.

4.1 The effects of the adversarial processes

In this subsection, we provide the empirical evidence of the assumption on the adversarial processes mentioned in Section 2 and Section 3. In this experiment, we remove the information of the digit identities of the images from the feature by the adversarial processes and observe the outputs of the digit recognizers relying on the feature to see if the information is really removed and the output is independent of the input. To do so, we designed the experiments using the MNIST dataset (LeCun & Cortes (2010)

The experiments for speaker identification were designed using the RSR2015 dataset (Larcher et al. (2014)) as follows. Six mobile devices (five smartphones and one tablet) were used for collecting speech data for the RSR2015. Three devices were assigned to each speaker. The performance of speaker identification was evaluated for 143 female speakers among a total of 300 speakers. For training, 10 utterances for each speaker were used. Then, identification was performed using utterances that were about one second long. In addition, as input for the encoder, 200-dimensional i-vectors were extracted for each utterance. The i-vector is a technique that is used for representing utterances of varying lengths as a vector with fixed dimensionality (Dehak et al. (2011)). In particular, the encoder E receives an i-vector and outputs the code. The two models (M and S) receive the code and perform speaker identification and channel identification, respectively.

In order to validate the performance of the proposed CAN framework, we compared the performances of the four systems: one without an adversarial process, two with the conventional adversarial processes and the proposed process. We report performances of each system by following similar manner in Liu & Tuzel (2016); averaging error rates over 5 networks that were randomly selected after sufficient training. More details of the experiments are in Appendix-A.

Unsupervised domain adaptation is a task that makes a classifier suitable for a target domain. The main challenge of this task is that only unlabeled data are provided from the target domain. Though both images and labels were used to train the source domain model, only the images were used for adaptation to the target domain. Therefore, the classifier, which is trained using labeled data of the source domain, should be generalized to the target domain. However, because of the phenomenon of dataset bias, a classifier from one domain does not generalize well to another domain (Torralba & Efros (2011)). We assume that the dataset bias is caused by domain information included in the data. Considering this assumption, the domain information represents characteristics of each dataset. Therefore, we performed the unsupervised domain adaptation task using the proposed CAN framework to eliminate domain information.

For this performance comparisons, we conducted two kinds of experiments on domain adaptation. As the first experiment, we adopted the experimental protocol described in (Tzeng et al. (2017)). We used the MNIST dataset as the source domain, whereas the USPS dataset as the target domain for domain adaptation. We additionally conducted domain adaptation experiment using different, larger dataset, SVHN instead of USPS with MNIST dataset. In this experiment, the SVHN dataset is used as the source domain, and the MNIST dataset is used as the target domain. Such setting was introduced in Ganin et al. (2016), as adaptation between domains which are significantly different in appearance. Unlike previous studies that used LeNet (LeCun et al. (1998)) for digit recognition, we used a model based on the maximum feature map (MFM) (Wu et al. (2015)). More details of the experiments are in Appendix-B.

4.4 Analysis of application results of the adversarial processes

We demonstrate the effect of the proposed method through an experiment to recognize the subsidiary information of the codes from E. Here, recognizing the subsidiary information means identifying the domains of codes (MNIST or USPS). For this purpose, multiple Es from the experiments on adaptation to USPS from MNIST in Section 4.3 were used; Es were adapted using CAN or ADDA, or not adapted. We observed the training loss while training a new model S2 to identify the domain of the codes (see Fig. 6). The model S2 has the same structure with S and performs the same operation, but the parameters were re-initialized and trained. We assumed that the training losses of S2 can reflect the amount of subsidiary information remaining in the codes. Fig. 6 shows that recognizing the domains of codes from E adapted by the proposed method is harder than other cases. Therefore, we concluded that using the proposed CAN is more appropriate for eliminating the subsidiary information and domain adaptation, than the conventional methods which confuses S.