Magnetic Resonance Imaging (MRI) is widely used for screening and staging prostate cancer. However, many prostate cancers have subtle features which are not easily identifiable on MRI, resulting in missed diagnoses and alarming variability in radiologist interpretation. Machine learning models have been developed in an effort to improve cancer identification, but current models localize cancer using MRI-derived features, while failing to consider the disease pathology characteristics observed on resected tissue. In this paper, we propose CorrSigNet, an automated two-step model that localizes prostate cancer on MRI by capturing the pathology features of cancer. First, the model learns MRI signatures of cancer that are correlated with corresponding histopathology features using Common Representation Learning. Second, the model uses the learned correlated MRI features to train a Convolutional Neural Network to localize prostate cancer. The histopathology images are used only in the first step to learn the correlated features. Once learned, these correlated features can be extracted from MRI of new patients (without histopathology or surgery) to localize cancer. We trained and validated our framework on a unique dataset of 75 patients with 806 slices who underwent MRI followed by prostatectomy surgery. We tested our method on an independent test set of 20 prostatectomy patients (139 slices, 24 cancerous lesions, 1.12M pixels) and achieved a per-pixel sensitivity of 0.81, specificity of 0.71, AUC of 0.86 and a per-lesion AUC of 0.96 ± 0.07, outperforming the current state-of-the-art accuracy in predicting prostate cancer using MRI. 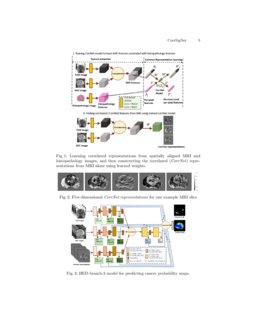 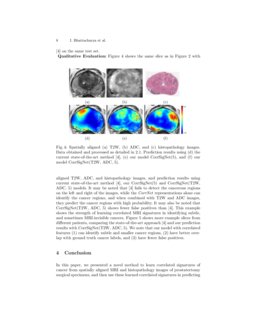 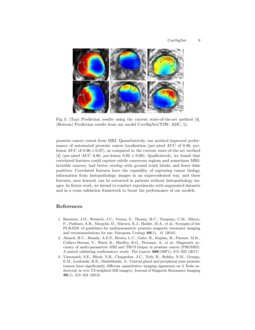 Predictive models can help standardize radiologist interpretation, but current models [viswanath2012central, sumathipala2018prostate, litjens2014computer, armato2018prostatex, viswanath2019comparing, cao2019joint] often learn from MRI only, without considering the disease pathology characteristics. These approaches derive MRI features that are agnostic to the biology of the tumor. Moreover, current predictive models mostly use inaccurate labels (either from biopsies [armato2018prostatex] that suffer from sampling errors, or cognitive registration of pre-operative MRI with digital histopathology images of surgical specimens, where a radiologist retrospectively outlines the lesions on MRI [sumathipala2018prostate]

[priester2017magnetic], making outlines on MRI alone insufficient to capture the entire extent of disease. Furthermore, it is challenging to outline the ~20% of tumors that are not clearly seen on MRI, even when using histopathology images as reference [barentsz2016synopsis]

. These MRI-based models use a variety of techniques including traditional classifiers with hand-crafted and radiomic features

, as well as deep learning based models

We used 95 prostate surgery patients with pre-operative multi-parametric MRI (T2-weighted and Apparent Diffusion Coefficient) and post-operative digitized histopathology images. Custom 3D printed molds were used to ensure that excised prostate tissue was sectioned in the same plane as the T2-weighted (T2W) MRI. An expert pathologist annotated cancer on the histopathology images. We spatially aligned the pre-operative MRI and digitized histopathology images of the excised tissue via the state-of-the-art RAPSODI registration platform [mirabelaregistration]. RAPSODI achieved a Dice similarity coefficient of 0.98±0.01 for the prostate, prostate boundary Hausdorff distance of 1.71±0.48 mm, and urethra deviation of 2.91±1.25 mm between registered histopathology images and MRI. Such careful registration of radiology and pathology images of the prostate enabled (1) correlation analysis of the two modalities at a pixel-level, and (2) accurate mapping of cancer labels from pathology to radiology images. We considered multiple slices per patient (average 7 slices/patient) irrespective of cancer size. Slices with missing cancer annotations were discarded during training. The dataset included some patients with cancer that had extra prostatic extensions, but our analysis was focused only on cancers inside the prostate.

We smoothed the histopathology images with a Gaussian filter with σ=0.25

to prevent downsampling artifacts, padded and then downsampled them to

. We used prostate masks to standardize intensities within the prostate, and then applied the learned transformation to the image region beyond the prostate. After intensity standardization, we normalized the intensities to have zero mean and standard deviation of 1.

We randomly split the 95 patients to create our train, validation, and test sets with 66, 9, and 20 patients respectively. After horizontal flipping based data augmentation, the train and validation sets had 700 and 106 slices respectively. The test set included 139 slices, 24 cancerous lesions, 1.12M pixels in the prostate with 9% cancer pixels. We performed MRI scale standardization on the train set, and used the learned histograms to standardize the validation and test sets. We followed a similar strategy for MRI intensity normalization.

. In contrast to the original CorrNet model, we did not use any non-linear activation function. We learned the parameters

is the mean hidden representation of the

Training: From the 66 patients in the training cohort, we sampled all the cancer pixels from within the prostate, and randomly sampled an equal number of non-cancer pixels, also from within the prostate, thereby generating a training set of ≈1.2M pixels, with equal number of cancer and non-cancer pixels. This ensured that we train the CorrNet with a balanced dataset of two classes. We used λ=2 to weigh the cross-correlation error higher than the reconstruction errors. We chose a squared error loss L for the reconstruction errors. We trained the CorrNet model with varying hidden layer dimensions, namely: k∈{1,3,5,15,30}. For each k, we used a learning rate η=10−5

2 shows CorrNet representations of an example MRI slice, with k=5.

We modified the Holistically Nested Edge Detection (HED) architecture [HED] to predict cancer probability maps for the entire prostate. We considered two modified versions of HED: (1) HED-3, and (2) HED-branch-3. The HED-3 model evaluates how well CorrNet representations alone perform in predicting cancer, while the HED-branch-3 model evaluates how well CorrNet representations combined with T2W and ADC images perform in predicting cancer. We represent our model using correlated feature learning and HED-3 as CorrSigNet(k), and our model with correlated feature learning and HED-branch-3 as CorrSigNet(T2W, ADC, k), where k is the CorrNet feature dimension. For example, CorrSigNet(5) uses only 5 correlated features for prediction, whereas CorrSigNet (T2W, ADC, 5) uses the normalized T2W and ADC intensities in addition to 5 correlated features for prediction. We chose a prediction model similar to the HED architecture because it is known to learn and combine multi-scale and multi-level features, and has been successfully applied to anatomy segmentations from CT scans [harrison2017progressive, roth2016spatial, nogues2016automatic], and to prostate cancer prediction [sumathipala2018prostate].

In HED-3, we input three adjacent CorrNet slice representations of the prostate and output predictions for only the central slice. This ensured that the 2D-HED model learned the 3D volumetric continuity from MRI/ histopathology/ correlated features. This also helped in reducing false positive rates.

In HED-branch-3 (shown in Figure 3), we combined the CorrNet slice representations together with the normalized T2W and ADC images as inputs to the model. Similar to HED-3, we considered three adjacent slices for each input sequence (T2W, ADC, CorrNet representations

), and predicted cancer probability maps for the central slice only. However, in HED-branch-3 model, we processed each input sequence independently using the first three blocks, concatenated the three outputs from the three independent blocks, and processed the concatenated output using the next 2 blocks. Since the input sequences are processed independently in the first three blocks, we had a total of 11 side outputs, which were fused together using a Conv-1D layer to form the weighted fused output. We computed balanced cross-entropy losses for each of the 12 outputs (11 side outputs and 1 fused output) while training the architecture, but computed evaluation metrics only on the fused output. We used

3×3 kernels for all convolution layers except the last Conv-1D layer. The number of filters in each layer is stated in the legend in Figure 3

. For both the HED-3 and HED-branch-3 models, we added Batch Normalization in each block, before ReLU activation, as opposed to the HED model used by

[sumathipala2018prostate] which used Batch Normalization in each layer. No post-processing steps were performed on the prediction maps. Training: We trained both models using an Adam optimizer with an initial learning rate η=10−3, weight decay α=0.1, epochs = 200 and early stopping.

Quantitative Evaluation: We quantitatively evaluated our models on a per-pixel and a per-lesion basis, with ground truth labels derived from pathologist cancer annotations on registered histopathology images. For a direct comparison, we reproduced the current state-of-the-art model [sumathipala2018prostate] to the best of our understanding, and computed both pixel-level and lesion-level evaluation metrics of this model on our test data (20 patients, 139 slices, 24 cancerous lesions, 1.12M pixels in the prostate). It may be noted that the AUC numbers reported in [sumathipala2018prostate] are computed on a lesion level, and not on a pixel-level. Our pixel-level metrics including all pixels within the prostate provide a more rigorous evaluation.

Pixel level analysis: We tested the performance of the CorrSigNet models with different inputs and varying CorrNet feature dimension k using the following pixel-level evaluation metrics (computed using 1.12M pixels in the prostate): sensitivity, specificity, and AUC of the ROC curve, with a probability threshold of 0.5. We note from Table 1 that CorrSigNet performs better than [sumathipala2018prostate], with consistently higher AUC numbers in pixel-level analysis. The sensitivity and specificity numbers vary within the models. Our tests showed that at least 3 CorrNet features were necessary for improved performance over MRI alone. We chose CorrSigNet (T2W, ADC, 5) as the optimum model, because it had high sensitivity, specificity and AUC, with an optimum number of parameters. Between false positives and false negatives, we note that a false negative is more detrimental than a false positive in the task of cancer prediction. Lesion level analysis: We performed lesion-level analysis using the evaluation method detailed in [sumathipala2018prostate] and found that CorrSigNet(T2W, ADC, 5) achieved a per-lesion AUC of 0.96±0.07 compared to a per-lesion AUC of 0.92±0.09 by [sumathipala2018prostate] on the same test set.

Qualitative Evaluation: Figure 4 shows the same slice as in Figure 2 with aligned T2W, ADC, and histopathology images, and prediction results using current state-of-the-art method [sumathipala2018prostate], our CorrSigNet(5) and CorrSigNet(T2W, ADC, 5) models. It may be noted that [sumathipala2018prostate] fails to detect the cancerous regions on the left and right of the images, while the CorrNet representations alone can identify the cancer regions, and when combined with T2W and ADC images, they predict the cancer regions with high probability. It may also be noted that CorrSigNet(T2W, ADC, 5) shows fewer false positives than [sumathipala2018prostate]. This example shows the strength of learning correlated MRI signatures in identifying subtle, and sometimes MRI-invisible cancers. Figure 5 shows more example slices from different patients, comparing the state-of-the-art approach [sumathipala2018prostate] and our prediction results with CorrSigNet(T2W, ADC, 5). We note that our model with correlated features (1) can identify subtle and smaller cancer regions, (2) have better overlap with ground truth cancer labels, and (3) have fewer false positives.

In this paper, we presented a novel method to learn correlated signatures of cancer from spatially aligned MRI and histopathology images of prostatectomy surgical specimens, and then use these learned correlated signatures in predicting prostate cancer extent from MRI. Quantitatively, our method improved performance of automated prostate cancer localization (per-pixel AUC of 0.86, per-lesion AUC of 0.96±0.07), as compared to the current state-of-the-art method [sumathipala2018prostate] (per-pixel AUC 0.80, per-lesion 0.92±0.09). Qualitatively, we found that correlated features could capture subtle cancerous regions and sometimes MRI-invisible cancers, had better overlap with ground truth labels, and fewer false positives. Correlated features have the capability of capturing tumor biology information from histopathology images in an unprecedented way, and these features, once learned, can be extracted in patients without histopathology images. In future work, we intend to conduct experiments with augmented datasets and in a cross-validation framework to boost the performance of our models.