Motivated by an abstract notion of low-level edge detector filters, we propose a simple method of unsupervised feature construction based on pairwise statistics of features. In the first step, we construct neighborhoods of features by regrouping features that correlate. Then we use these subsets as filters to produce new neighborhood features. Next, we connect neighborhood features that correlate, and construct edge features by subtracting the correlated neighborhood features of each other. To validate the usefulness of the constructed features, we ran AdaBoost.MH on four multi-class classification problems. Our most significant result is a test error of 0.94 algorithm which is essentially free of any image-specific priors. On CIFAR-10 our method is suboptimal compared to today's best deep learning techniques, nevertheless, we show that the proposed method outperforms not only boosting on the raw pixels, but also boosting on Haar filters. 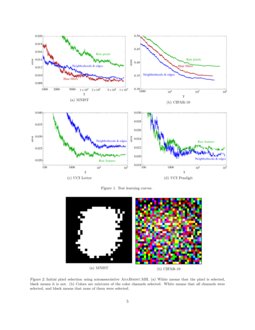 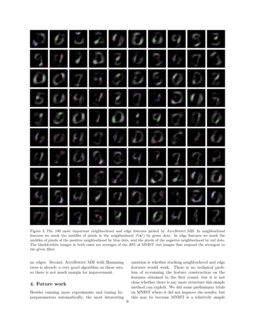 Neighborhood filters and the decreasing rearrangement

Edges are a basic and fundamental feature in image processing, that are ...
Ciprian Orhei, et al. ∙

by subtracting the correlated neighborhood features of each other. The method was motivated directly by the notion of low-level edge detector filters. These filters work well in practice, and they are ubiquitous in the first layer of both biological and artificial systems that learn on natural images. Indeed, the four simple feature construction steps are directly based on an abstract notion of Haar or Gabor filters: homogeneous, locally connected patches of contrasting intensities. In a more high-level sense, the technique is also inspired by a, perhaps naive, notion of how natural neural networks work: in the first layer they pick up correlations in stimuli, and settle in a “simple” theory of the world. Next they pick up events when the correlations are broken, and assign a new units to the new “edge” features. Yet another direct motivation comes from

(Le Roux et al., 2007) where they show that pixel order can be recovered using only feature correlations. Once pixel order is recovered, one can immediately apply algorithms that explicitly use neighborhood-based filters. From this point of view, in this paper we show that it is possible to go from pixel correlations to feature construction, without going through the explicit mapping of the pixel order.

To validate the usefulness of the constructed features, we ran AdaBoost.MH (Schapire and Singer, 1999)

on multi-class classification problems. Boosting is one of the best “shallow” multi-class classifiers, especially when the goal is to combine simple classifiers that act on small subsets a large set of possibly useful features. Within multi-class boosting algorithms, AdaBoost.MH is the state of the art. On this statement we are at odds with recent results on multiclass boosting. On the two UCI data sets we use in this paper (and on others reported in

Our most significant result comes on the MNIST set where we achieve a test error of 0.94% with an algorithm which is essentially free of any image-specific priors (e.g., pixel order, preprocessing). On CIFAR-10, our method is suboptimal compared to today’s best deep learning techniques, reproducing basically the results of the earliest attempts on the data set (Ranzato et al., 2010). The main point in these experiments is that the proposed method outperforms not only boosting on the raw pixels, but also boosting on Haar filters. We also tried the technique on two relatively large UCI data sets. The results here are essentially negative: the lack of correlations between the features do not allow us to improve significantly on “shallow” AdaBoost.

The paper is organized as follows. In Section 2 we formally describe the method. In Section 3 we show experimental results, and we conclude with a discussion on future research in Section 4.

are the input vectors and

Both hyperparameters ρN and ρE threshold correlations, nevertheless, they have quite different roles: ρN controls the neighborhood size whereas ρE controls the distance of neighborhoods under which an edge (that is, a significantly different response or a “surprise”) is an interesting feature. In practice, we found that the results were rather insensitive to the value of these parameters in the [0.3,0.9] interval. For now we manually set ρN and ρE in order to control the number of features. In our experiments we found that it was rarely detrimental to increase the number of features in terms of the asymptotic test error (w.r.t. the number of boosting iterations T) but the convergence of AdaBoost.MH slowed down if the number of features were larger than some thousands (either because each boosting iteration took too much time, or because we had to seriously subsample the features in each iteration, essentially generating random trees, and so the number of iterations exploded).

On images, where the dimensionality of the input space (number of pixels) is large, we subsample the pixels [\bxj]j=1,…,d before constructing the neighborhoods J(\bxj) to control the number of neighborhood features, again, for computational rather than statistical reasons. We simply run AdaBoost.MH with decision stumps in an autoassociative setup. A decision stump uses a single pixel as input and outputs a prediction on all the pixels. We take the first d′ stumps that AdaBoost picks, and use the corresponding pixels (a subset of the full set of pixels) to construct the neighborhoods.

set of thresholds {ρ1N,…,ρMN}, and constructing M “concentric” neighborhoods for each feature \bxj. On data sets with heterogeneous feature types it is also important to normalize the features by the usual transformation xji′=(xji−μ(\bxj))/σ(\bxj), where μ(\bx) and σ(\bx)

denote the mean and the standard deviation of the elements of

\bx, respectively, before proceeding with the feature construction (Step 2).

Optimally, of course, automatic hyperparameter optimization (Bergstra and Bengio, 2012; Bergstra et al., 2011; Snoek et al., 2012) is the way to go, especially since AdaBoost.MH also has two or three hyperparameters, and manual grid search in a four-to-five dimensional hyperparameter space is not feasible. For now, we set aside this issue for future work.

The constructed features can be input to any “shallow” classifier. Since we use AdaBoost.MH with Hamming trees, we briefly describe them here. The full formal description with the pseudocode is in the documentation of MultiBoost (Benbouzid et al., 2012). It is available at the multiboost.org website along with the code itself.

The advantage of \AlgoAdaBoost.MH over other multi-class boosting approaches is that it does not require from the base learner to predict a single label ˆy=h(\bx) for an input instance \bx, rather, it uses vector-valued base learners \bh(\bx). The requirement for these base learners is weaker: it suffices if the edge γ(\bh,\bW)=∑ni=1∑Kℓ=1wi,ℓhℓ(xi)yi,ℓ is slightly larger than zero, where \bW=[wi,ℓ]ℓ=1,…,Ki=1,…,n is the weight matrix (over instances and labels) in the current boosting iteration, and \byi=(yi,1,…,yi,K) is a ±1-valued one-hot code of the label. This makes it easy to turn weak binary classifiers into multi-class base classifiers, without requiring that the multi-class zero-one base error be less than 1/2. In case \bh

is a decision tree, there are two important consequences. First, the size (the number of leaves

N) of the tree can be arbitrary and can be tuned freely (whereas requiring a zero-one error to be less than 1/2 usually implies large trees). Second, one can design trees with binary {±1}K-valued outputs, which could not be used as standalone multi-class classifiers.

In a Hamming tree, at each node, the split is learned by a multi-class decision stump of the form \bh(\bx)=\bvφ(\bx), where φ(\bx) is a (standard) scalar ±1-valued decision stump, and \bv is a {±1}K-valued vector. At leaf nodes, the full {±1}K-valued vector \bvφ(\bx) is output for a given \bx, whereas at inner nodes, only the binary function φ(\bx) is used to decide whether the instance \bx goes left or right. The tree is constructed top-down, and each node stump is optimized in a greedy manner, as usual. For a given \bx, unless \bv happens to be a one-hot vector, no single class can be output (because of ties). At the same time, the tree is perfectly boostable: the weighted sum of Hamming trees produces a real-valued vector of length K, of which the predicted class can be easily derived using the \argmax operator.

We carried out experiments on four data sets: MNIST222http://yann.lecun.com/exdb/mnist and CIFAR-10333http://www.cs.toronto.edu/~kriz/cifar.html are standard image classification data sets, and the Pendigit and Letter sets are relatively large benchmarks from the UCI repository444http://www.ics.uci.edu/~mlearn/MLRepository.html. We boosted Hamming trees (Benbouzid et al., 2012) on each data sets. Boosted Hamming trees have three hyperparameters: the number of boosting iterations T, the number of leaves N, and the number of (random) features d′ considered at each split (LazyBoost (Escudero et al., 2000)

settings that give the flavor of a random forest to the final classifier). Out of these three, we validated only the number of leaves

N in the ‘‘classical’’ way using 80/20 single validation on the training set. Since AdaBoost.MH does not exhibit any overfitting even after a very large number of iterations (see Figure 1),555This is certainly the case in these four experiments, but in our experience, making AdaBoost.MH overfit is really hard unless significant label noise is present in the training set. we run it for a large number of T=105 iterations, and report the average test error of the last T/2 iterations. The number of (random) features d′ considered at each split is another hyperparameter which does not have to be tuned in the traditional way. In our experience, the larger it is, the smaller the asymptotic test error is. On the other hand, the larger it is the slower the algorithm converges to this error. This means that d′ controls the trade-off between the accuracy of the final classifier and the training time. We tuned it to obtain the full learning curves in reasonable time.

. Estimating correlations can be done robustly on relatively small random samples, so we ran the algorithm on a random input matrix

CIFAR-10 consists of 50000 color training images of 10 object categories of size 32×32=1024, giving a total of 3×1024=3072 features. In all experiments on CIFAR, d′ was set to 10. The first baseline run was AdaBoost.MH with Hamming trees of 20 leaves on the raw pixels (green curve in Figure 1(b)), achieving a test error of 39.1%. We also ran AdaBoost.MH with Hamming trees of 20 leaves in the roughly 350000-dimensional feature space generated by five types of Haar filters (Viola and Jones 2004; red curve in Figure 1(b)). This setup produced a test error of 36.1%. For generating neighborhood and edge features, we first ran autoassociative AdaBoost.MH with decision stumps for 1000 iterations that picked the 922 color channels depicted by the white and colored pixels in Figure 2(b). Then we constructed 922 neighborhood features using ρN=0.85 and 4552 edge features using ρE=0.85. Finally we ran AdaBoost.MH with Hamming trees of 20 leaves on the constructed features (blue curve in Figure 1(a)), achieving a test error of 33.6%.

None of these results are close to the sate of the art, but they are not completely off the map, either: they match the performance of one of the early techniques that reported error on CIFAR-10 (Ranzato et al., 2010). The main significance of this experiment is that AdaBoost.MH with neighborhood and edge features can beat not only AdaBoost.MH on raw pixels but also AdaBoost.MH with Haar features.

Besides running more experiments and tuning hyperparameters automatically, the most interesting question is whether stacking neighborhood and edge features would work. There is no technical problem of re-running the feature construction on the features obtained in the first round, but it is not clear whether there is any more structure this simple method can exploit. We did some preliminary trials on MNIST where it did not improve the results, but this may be because MNIST is a relatively simple set with not very complex features and rather homogeneous classes. Experimenting with stacking on CIFAR is definitely the next step. Another interesting avenue is to launch a large scale exploration on more non-image benchmark sets to see whether there is a subclass of sets where the correlation-based feature construction may work, and then to try to characterize this subclass.