Correction of BDFk for fractional Feynman-Kac equation with Lévy flight

In this work, we present the correction formulas of the k-step BDF convolution quadrature at the starting k-1 steps for the fractional Feynman-Kac equation with Lévy flight. The desired kth-order convergence rate can be achieved with nonsmooth data. Based on the idea of [Jin, Li, and Zhou, SIAM J. Sci. Comput., 39 (2017), A3129–A3152], we provide a detailed convergence analysis for the correction BDFk scheme. The numerical experiments with spectral method are given to illustrate the effectiveness of the presented method. To the best of our knowledge, this is the first proof of the convergence analysis and numerical verified the sapce fractional evolution equation with correction BDFk. 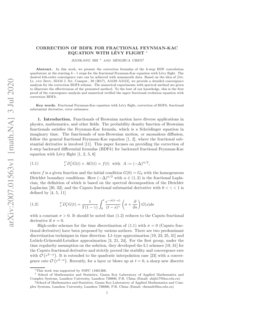 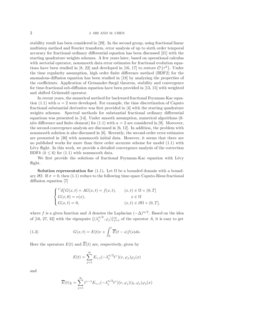 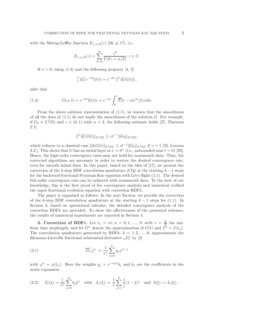 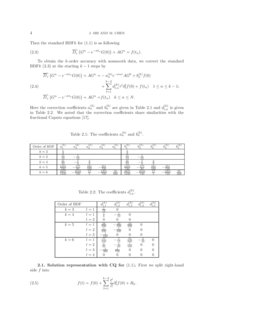 [1, 2], where the fractional substantial derivative is involved [11]. This paper focuses on providing the correction of k-step backward differential formulas (BDFk) for backward fractional Feynman-Kac equation with Lévy flight [1, 2, 5, 6]

where f is a given function and the initial condition G(0)=G0 with the homogeneous Dirichlet boundary conditions. Here (−Δ)α/2 with α∈(1,2) is the fractional Laplacian, the definition of which is based on the spectral decomposition of the Dirichlet Laplacian [20, 32]; and the Caputo fractional substantial derivative with 0<γ<1 is defined by [4, 5, 11]

with a constant σ>0. It should be noted that (???) reduces to the Caputo fractional derivative if σ=0.

High-order schemes for the time discretization of (1) with σ=0 (Caputo fractional derivative) have been proposed by various authors. There are two predominant discretization techniques in time direction: L1-type approximation [19, 23, 25, 31] and Lubich-Grünwald-Letnikov approximation [3, 21, 24]. For the first group, under the time regularity assumption on the solution, they developed the L1 schemes [19, 31] for the Caputo fractional derivative and strictly proved the stability and convergence rate with O(τ2−α)

. It is extended to the quadratic interpolation case

[23] with a convergence rate O(τ3−α). Recently, for a layer or blows up at t=0, a sharp new discrete stability result has been considered in [29]

. In the second group, using fractional linear multistep method and Fourier transform, error analysis of up to sixth order temporal accuracy for fractional ordinary differential equation has been discussed

[21] with the starting quadrature weights schemes. A few years later, based on operational calculus with sectorial operator, nonsmooth data error estimates for fractional evolution equations have been studied in [8, 22] and developed in [16, 17] to restore O(τk). Under the time regularity assumption, high order finite difference method (BDF2) for the anomalous-diffusion equation has been studied in [18] by analyzing the properties of the coefficients. Application of Grenander-Szegö theorem, stability and convergence for time-fractional sub-diffusion equation have been provided in [13, 15] with weighted and shifted Grünwald operator.

In recent years, the numerical method for backward fractional Feynman-Kac equation (1) with α=2 were developed. For example, the time discretization of Caputo fractional substantial derivative was first provided in [4] with the starting quadrature weights schemes. Spectral methods for substantial fractional ordinary differential equations was presented in [14]. Under smooth assumption, numerical algorithms (finite difference and finite element) for (1) with α=2 are considered in [9]. Moreover, the second-convergence analysis are discussed in [6, 12]. In addition, the problem with nonsmooth solution is also discussed in [6]. Recently, the second-order error estimates are presented in [30] with nonsmooth initial data. However, it seems that there are no published works for more than three order accurate scheme for model (1) with Lévy flight. In this work, we provide a detailed convergence analysis of the correction BDFk (k≤6) for (1) with nonsmooth data.

We first provide the solutions of fractional Feynman-Kac equation with Lévy flight.

Let Ω be a bounded domain with a boundary ∂Ω. If σ=0, then (1) reduce to the following time-space Caputo-Riesz fractional diffusion equation [7]

Here the operators E(t) and ¯¯¯¯E(t) are, respectively, given by

which reduces to a classical case ∥∂tG(t)∥L2(Ω)≤ct−1∥G0∥L2(Ω) if γ=1 [32, Lemma 3.2 ]. This shows that G has an initial layer at t→0+ (i.e., unbounded near t=0) [29]. Hence, the high-order convergence rates may not hold for nonsmooth data. Thus, the corrected algorithms are necessary in order to restore the desired convergence rate, even for smooth initial data. In this paper, based on the idea of [17], we present the correction of the k-step BDF convolution quadrature (CQ) at the starting k−1 steps for the backward fractional Feynman-Kac equation with Lévy flight (1). The desired kth-order convergence rate can be achieved with nonsmooth data. To the best of our knowledge, this is the first proof of the convergence analysis and numerical verified the sapce fractional evolution equation with correction BDFk.

The paper is organized as follows. In the next Section, we provide the correction of the k-step BDF convolution quadrature at the starting k−1 steps for (1). In Section 3, based on operational calculus, the detailed convergence analysis of the correction BDFk are provided. To show the effectiveness of the presented schemes, the results of numerical experiments are reported in Section 4.

with φn=φ(tn). Here the weights qj=e−σjτbj and bj are the coefficients in the series expansion

Then the standard BDFk for (1) is as following

To obtain the k-order accuracy with nosmooth data, we correct the standard BDFk (7) at the starting k−1 steps by

2.1 Solution representation with CQ for (1)

First we split right-hand side f into

Applying Laplace transform in [4] to both sides of the above equation, we have

By the inverse Laplace transform, we can obtain the solution W(t) as following

with a positive constant c.

2.2 Discrete solution representation with CQ for (8)

Here the contour is

Multiplying (18) by ξn and summing over n, we have

According to Cauchy’s integral formula, and the change of variables ξ=e−zτ, and Cauchy’s theorem of complex analysis, we have

with the Bromwich contours [26]

In this section, based on the idea of [17], we provided the detailed convergence analysis of the correction BDFk for (1) with Lévy flight.

Let δτ and K be given by (6) and (13), respectively. Then there exist a positive constants c such that

where κ in (14) is large enough compared with σ. Using the triangle inequality and (15), we have