Generative adversarial networks (GANs) transform low-dimensional latent vectors into visually plausible images. If the real dataset contains only clean images, then ostensibly, the manifold learned by the GAN should contain only clean images. In this paper, we propose to denoise corrupted images by finding the nearest point on the GAN manifold, recovering latent vectors by minimizing distances in image space. We first demonstrate that given a corrupted version of an image that truly lies on the GAN manifold, we can approximately recover the latent vector and denoise the image, obtaining significantly higher quality, comparing with BM3D. Next, we demonstrate that latent vectors recovered from noisy images exhibit a consistent bias. By subtracting this bias before projecting back to image space, we improve denoising results even further. Finally, even for unseen images, our method performs better at denoising better than BM3D. Notably, the basic version of our method (without bias correction) requires no prior knowledge on the noise variance. To achieve the highest possible denoising quality, the best performing signal processing based methods, such as BM3D, require an estimate of the blur kernel. 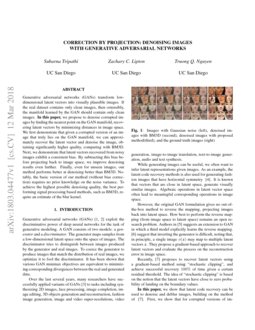 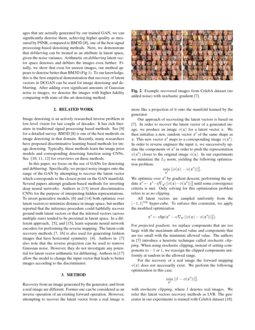 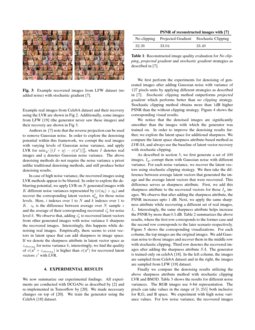 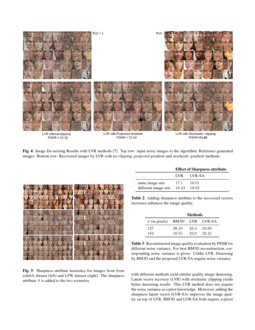 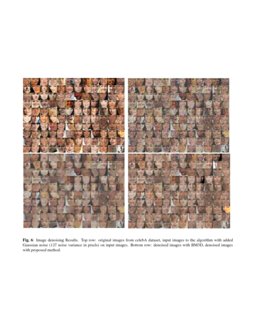 exploit the discriminative power of deep neural networks for the task of generative modeling. A GAN consists of two models: a

Over the last several years, many researchers have successfully applied variants of GANs [3]

While generating images can be useful, we often want to infer latent representations given images. As an example, the latent code recovery methods is also used for generating fashion images that have horizontal symmetry  [4]. It is known that vectors that are close in latent space, generate visually similar images. Algebraic operations in latent vector space often lead to meaningful corresponding operations in image space.

However, the original GAN formulation gives no out-of-the-box method to reverse the mapping, projecting images back into latent space. How best to perform the reverse mapping (from image space to latent space) remains an open research problem. Authors in [5] suggests an extension to GAN in which a third model explicitly learns the reverse mapping. [6] suggest that inverting the generator is difficult, noting that, in principle, a single image ϕ(z) may map to multiple latent vectors z. They propose a gradient-based approach to recover latent vectors and evaluate the process on the reconstruction error in image space.

of time given a certain residual threshold. The idea of “stochastic clipping” is based on the notion that the latent vectors have close to zero probability of landing on the boundary values.

In this paper, we show that latent code recovery can be used to denoise and deblur images, building on the method of  [7]. First, we show that for corrupted versions of images that are actually generated by our trained GAN, we can significantly denoise them, achieving higher quality as measured by PSNR, compared to BM3D [8], one of the best signal processing-based denoising methods. Next, we demonstrate that deblurring can be treated as an attribute in latent space, given the noise variance. Arithmetic on deblurring latent vector space denoises and deblurs the images even further. Finally, we show that even for unseen images, our method appears to denoise better than BM3D (Fig 1). To our knowledge, this is the first empirical demonstration that recovery of latent vectors in DCGAN can be used for image denoising and deblurring. After adding even significant amounts of Gaussian noise to images, we denoise the images with higher fidelity comparing with state-of-the-art denoising method.

Image denoising is an actively researched inverse problem in low-level vision for last couple of decades. It has rich literature in traditional signal processing based methods. See [9] for a detailed survey. BM3D [8] is one of the best methods on image denoising in that domain. Recently, many researchers have proposed discriminative learning based methods for image denoising. Typically, these methods learn the image prior models and corresponding denoising function using CNNs. See  [10, 11, 12] for overviews on these methods.

In this paper, we focus on the use of GANs for denoising and deblurring. Specifically, we project noisy images onto the range of the GAN by attempting to recover the latent vector which corresponds to the closest point on the GAN manifold. Several papers attempt gradient-based methods for inverting deep neural networks. Authors in [13]

[6] and [14] both optimize over latent vectors to minimize distance in image space, but neither reported that the inference procedure could faithfully recover ground truth latent vectors or that the inferred vectors (across multiple runs) tended to be proximal in latent space. In a different approach,  [5], and [15], learn separate neural network encoders for performing the reverse mapping. The latent code recovery methods [7, 16] is also used for generating fashion images that have horizontal symmetry  [4]. Authors in  [7] also note that the reverse projection can be used to remove Gaussian noise. However, they do not investigate any potential for latent vector arithmetic for deblurring. Authors in [17] allow the model to change the input vector that leads to better images according to the discriminator.

Our approach of recovering the latent vectors is based on [7]. In order to recover the latent vector of a generated image, we produce an image ϕ(z) for a latent vector z. We then initialize a new, random vector z′ of the same shape as z. This new vector z′ maps to a corresponding image ϕ(z′). In order to reverse engineer the input z, we successively update the components of z′ in order to push the representation ϕ(z′) closer to the original image ϕ(z). In our experiments we minimize the L2 norm, yielding the following optimization problem:

We optimize over z′ by gradient descent, performing the update z′←z′−η∇z′||ϕ(z)−ϕ(z′)||22 until some convergence criteria is met. Only solving for this optimization problem refers to as no clipping.

All latent vectors are sampled uniformly from the [−1,1]100 hyper-cube. To enforce this constraint, we apply the modified optimization

For the recovery of a real image the forward mapping ϕ(z) does not necessarily exist. We perform the following optimization in this case.

with stochastic clipping, where I denotes real images. We refer this latent vectors recovery methods as LVR. The generator in our experiments is trained with CelebA dataset [18]. Example real images from CelebA dataset and their recovery using the LVR are shown in Fig 2. Additionally, some images from LFW [19] (the generator never saw these images) and their recovery are shown in Fig 3.

In case of high noise variance, the recovered images using LVR methods appear to be blurred. In order to explore the deblurring potential, we apply LVR on N generated images with K different noise variances represented by (ϕ(zi)+ηk) and recover the corresponding latent vectors for those noise levels. Here, i indexes over 1 to N and k indexes over 1 to K. zk is the difference between average over N sample z and the average of their corresponding recovered z′k for noise level k. We observe that, adding z′k to recovered latent vectors from other generated images with noise variance k sharpens the recovered images. Interestingly, this happens while denoising real images. Empirically, there seems to exist vectors in latent space that can add sharpness in image space. If we denote the sharpness attribute in latent vector space as zsharpk for noise variance k, interestingly, we find the quality of ϕ(z′+zsharpk) is higher than ϕ(z′) for recovered latent vectors z′ with LVR.

We now summarize our experimental findings. All experiments are conducted with DCGANs as described by [2]

and re-implemented in Tensorflow by

We first perform the experiments for denoising of generated images after adding Gaussian noise with variance of 127 pixels units by applying different strategies as described in [7]. Stochastic clipping method outperforms projected gradient which performs better than no clipping strategy. Stochastic clipping method obtains more than 1dB higher PSNR than the without clipping strategy. Figure 4 shows the corresponding visual results.

We notice that the denoised images are significantly smoother than the images with which the generator was trained on. In order to improve the denoising results further, we explore the latent space for additional sharpness. We compare the latent space sharpness attribute-based method as LVR-SA, and always use the baseline of latent vector recovery with stochastic clipping.

As described in section 3, we first generate a set of 400 images, Ig, corrupt them with Gaussian noise with different variance. For each noise variance, we recover the latent vectors using stochastic clipping strategy. We then take the difference between average latent vectors that generated the image and the average latent vectors that were recovered. This difference serves as sharpness attribute. First, we add this sharpness attribute to the recovered vectors for those Ig images. We observe that after adding the sharpness attribute, the PSNR increases upto 1 dB. Next, we apply the same sharpness attribute while recovering a different set of real images, Ir. Interestingly, the same sharpness attribute helps increase the PSNR by more than 0.5 dB. Table 2 summarizes the above results, where the first row corresponds to the former case and the second row corresponds to the later scenario respectively. Figure 5 shows the corresponding visualizations. For each column, the top images are the original images. We add Gaussian noise to those images and recover them in the middle row with stochastic clipping. Third row denotes the recovered images after adding the sharpness attribute SA. The generator is trained only on celebA [18]. In the left column, the images are sampled from CelebA dataset and in the right, the images are sampled from LFW [19] dataset.

Finally we compare the denoising results utilizing the above sharpness attribute method with stochastic clipping LVR and BM3D. Table 3 shows the results for different noise variances. The RGB images use 8-bit representation. The pixels can take values in the range of [0,255] both inclusive for R,G, and B space. We experiment with high noise variance values. For low noise variance, the recovered images with different methods yield similar quality image deniosing. Latent vector recovery (LVR) with stochastic clipping yields better denoising results. This LVR method does not require the noise variance as a prior knowledge. Moreover, adding the sharpness latent vector (LVR-SA) improves the image quality on top of LVR. BM3D and LVR-SA both require a-priori knowledge of the noise variance. Figure 6 demonstrates the corresponding visual results. Denoising with the proposed method recovers clearly better quality images than BM3D.