Distributed representations of words, better known as word embeddings, have become important building blocks for natural language processing tasks. Numerous studies are devoted to transferring the success of unsupervised word embeddings to sentence embeddings. In this paper, we introduce a simple representation of sentences in which a sentence embedding is represented as a weighted average of word vectors followed by a soft projection. We demonstrate the effectiveness of this proposed method on the clinical semantic textual similarity task of the BioCreative/OHNLP Challenge 2018. 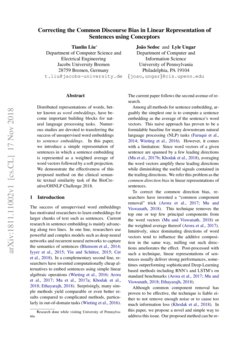 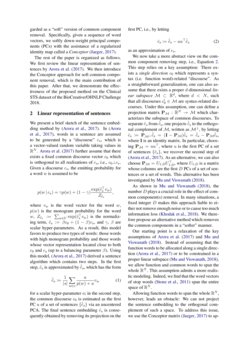 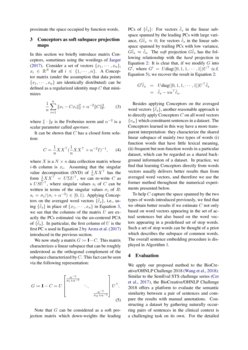 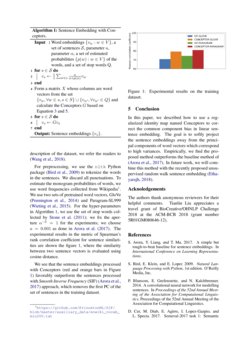 The success of unsupervised word embeddings has motivated researchers to learn embeddings for larger chunks of text such as sentences. Current research in sentence embedding is mainly advancing along two lines. In one line, researchers use powerful and complex models such as deep neural networks and recurrent neural networks to capture the semantics of sentences

Among all methods for sentence embedding, arguably the simplest one is to compute a sentence embedding as the average of the sentence’s word vectors. This naive approach has proven to be a formidable baseline for many downstream natural language processing (NLP) tasks (Faruqui et al., 2014; Wieting et al., 2016). However, it comes with a limitation: Since word vectors of a given sentence are spanned by a few leading directions (Mu et al., 2017b; Khodak et al., 2018), averaging the word vectors amplify these leading directions while diminishing the useful signals contained in the trailing directions. We refer this problem as the common direction bias in linear representations of sentences.

. Intuitively, since dominating directions of word vectors tend to influence the additive composition in the same way, nulling out such directions ameliorates the effect. Post-processed with such a technique, linear representations of sentences usually deliver strong performances, sometimes outperforming sophisticated Deep-Learning based methods including RNN’s and LSTM’s on standard benchmarks

Although common component removal has proven to be effective, the technique is liable either to not remove enough noise or to cause too much information loss (Khodak et al., 2018). In this paper, we propose a novel and simple way to address this issue. Our proposed method can be regarded as a “soft” version of common component removal. Specifically, given a sequence of word vectors, we softly down-weight principal components (PCs) with the assistance of a regularized identity map called a Conceptor (Jaeger, 2017).

The rest of the paper is organized as follows. We first review the linear representation of sentences by Arora et al. (2017). We then introduce the Conceptor approach for soft common component removal, which is the main contribution of this paper. After that, we demonstrate the effectiveness of the proposed method on the Clinical STS dataset of the BioCreative/OHNLP Challenge 2018.

, which is a vector-valued random variable taking values in

RN. Arora et al. (2017) further assume that there exists a fixed common discourse vector c0 which is orthogonal to all realizations of cs, i.e., c0⊥cs. Given a discourse cs

, the emitting probability for a word

w is assumed to be

where vw is the word vector for the word w, p(w) is the monogram probability for the word w, Z~cs:=∑w∈Vexp(~c⊤svw) is the normalizing term, ~cs:=βc0+(1−β)cs, and γ, β are scalar hyper-parameters. As a result, this model favors to produce two types of words: those words with high monogram probability and those words whose vector representation located close to both c0 and cs (up to a balancing parameter β). Using this model, Arora et al. (2017) derived a sentence algorithm which contains two steps. In the first step, ~cs is approximated by ^~cs, which has the form

for a scalar hyper-parameter a; in the second step, the common discourse c0

is estimated as the first PC

u of a set of sentences {^~cs} via an uncentered PCA. The final sentence embedding ^cs is consequently obtained by removing its projection on the first PC, i.e., by letting

as an approximation of cs.

We now take a more abstract view on the common component removing step, i.e., Equation 2. This step relies on a key assumption: There exists a single direction c0 which represents a syntax (i.e. function word)-related “discourse”. As a straightforward generalization, one can also assume that there exists a proper d-dimensional linear subspace M⊂Rd, where d<N, such that all discourses c′0∈M are syntax-related discourses. Under this assumption, one can define a projection matrix PM:RN→M which characterizes the subspace of common discourses. To separate ^cs from ^~cs, one projects ^~cs to the orthogonal complement of M, written as M⊥, by letting ^cs\coloneqqPM⊥^~cs=(I−PM)^~cs=^~cs−PM^~cs, where I

is an identity matrix. In particular, choosing

As shown in Mu and Viswanath (2018), the number D plays a crucial role in the effect of common component(s) removal. In many situations, a fixed integer D makes this approach liable to either not remove enough noise or to cause too much information loss (Khodak et al., 2018). We therefore propose an alternative method which removes the common components in a “softer” manner.

Our starting point is a relaxation of the key assumptions of Arora et al. (2017) and Mu and Viswanath (2018). Instead of assuming that the function words to be allocated along a single direction (Arora et al., 2017) or to be constrained in a proper linear subspace (Mu and Viswanath, 2018), we allow function and common words to span the whole RN. This assumption admits a more realistic modeling. Indeed, we find that the word vectors of stop words (Stone et al., 2011) span the entire space of RN.

Allowing function words to span the whole RN, however, leads an obstacle: We can not project the sentence embedding to the orthogonal complement of such a space. To address this issue, we use the Conceptor matrix (Jaeger, 2017) to approximate the space occupied by function words.

In this section we briefly introduce matrix Conceptors, sometimes using the wordings of Jaeger (2017). Consider a set of vectors {x1,⋯,xn}, xi∈RN for all i∈{1,⋯,n}. A Conceptor matrix (under the assumption that data points {x1,⋯,xn} are identically distributed) can be defined as a regularized identity map C that minimizes

where ∥⋅∥F is the Frobenius norm and α−2 is a scalar parameter called aperture.

It can be shown that C has a closed form solution:

. Assuming that the singular value decomposition (SVD) of

1nXX⊤ has the form 1nXX⊤=UΣU⊤, we can re-write C as s USU⊤, where singular values si of C can be written in terms of the singular values σi of R: si=σi/(σi+α−2)∈[0,1). Applying Conceptors on the averaged word vectors {^~cs}, i.e., using {^~cs} in place of {x1,⋯,xn} in Equation 3, we see that the columns of the matrix U are exactly the PCs estimated via the un-centered PCA of {^~cs}. In particular, the first column of U is the first PC u used in Equation 2 by Arora et al. (2017) introduced in the previous section.

We now study a matrix G\coloneqqI−C. This matrix characterizes a linear subspace that can be roughly understood as the orthogonal complement of the subspace characterized by C. This fact can be seen via the following representation:

Note that G can be considered as a soft projection matrix which down-weights the leading PCs of {^~cs}: For vectors ^~cs

in the linear subspace spanned by the leading PCs with large variance,

G^~cs≈0; for vectors ^~cs in the linear subspace spanned by trailing PCs with low variance, G^~cs≈^~cs. The soft projection G^~cs has the following relationship with the hard projection in Equation 2: It is clear that, if we modify G into G′, where G′=Udiag([0,1,1,⋯,1])U⊤ (c.f. Equation 5), we recover the result in Equation 2:

Besides applying Conceptors on the averaged word vectors {^~cs}, another reasonable approach is to directly apply Conceptors C on all word vectors {vw} which constituent sentences in a dataset. The Conceptors learned in this way have a more transparent interpretation: they characterize the shared linear subspace of mainly two types of words (i) function words that have little lexical meaning, (ii) frequent but non-function words in a particular dataset, which can be regarded as a shared background information of a dataset. In practice, we find that learning Conceptors directly from words vectors usually delivers better results than from averaged word vectors, and therefore we use the former method throughout the numerical experiments presented below.

To help C capture the space spanned by the two types of words introduced previously, we find that we obtain better results if we estimate C not only based on word vectors appearing in the set of actual sentences but also based on the word vectors appearing in a predefined set of stop words. Such a set of stop words can be thought of a prior which describes the subspace of common words. The overall sentence embedding procedure is displayed in Algorithm 1.

We apply our proposed method to the BioCreative/OHNLP Challenge 2018 (Wang et al., 2018). Similar to the SemEval STS challenge series (Cer et al., 2017), the BioCreative/OHNLP Challenge 2018 offers a platform to evaluate the semantic similarity between a pair of sentences and compare the results with manual annotations. Constructing a dataset by gathering naturally occurring pairs of sentences in the clinical context is a challenging task on its own. For the detailed description of the dataset, we refer the readers to (Wang et al., 2018).

For preprocessing, we use the nltk Python package (Bird et al., 2009) to tokenize the words in the sentences. We discard all punctuations. To estimate the monogram probabilities of words, we use word frequencies collected from Wikipedia111https://github.com/PrincetonML/SIF/blob/master/auxiliary_data/enwiki_vocab_min200.txt. We use two sets of pretrained word vectors, GloVe (Pennington et al., 2014) and Paragram-SL999 (Wieting et al., 2015). For the hyper-parameters in Algorithm 1, we use the set of stop words collected by Stone et al. (2011); we fix the aperture α−2=1 for the experiments; we choose a=0.001 as done in Arora et al. (2017). The experimental results in the metric of Spearman’s rank correlation coefficient for sentence similarities are shown the figure 1, where the similarity between two sentence vectors is evaluated using cosine distance.

In this paper, we described how to use a regularized identity map named Conceptors to correct the common component bias in linear sentence embedding. The goal is to softly project the sentence embeddings away from the principal components of word vectors which correspond to high variances. Empirically, we find the proposed method outperforms the baseline method of (Arora et al., 2017). In future work, we will combine this method with the recently proposed unsupervised random walk sentence embedding (Ethayarajh, 2018).