Cooperative Resolvability and Secrecy in the Cribbing Multiple-Access Channel 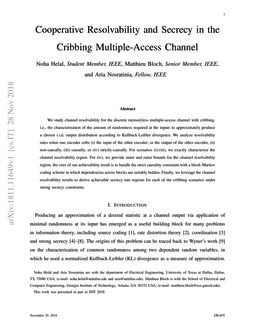 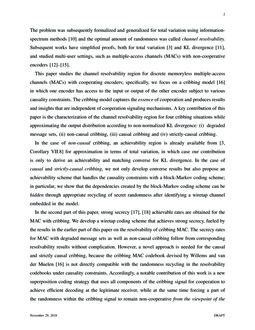 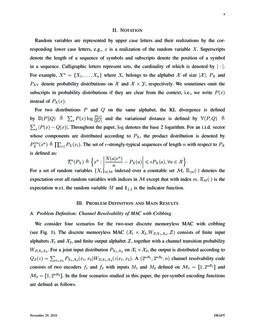 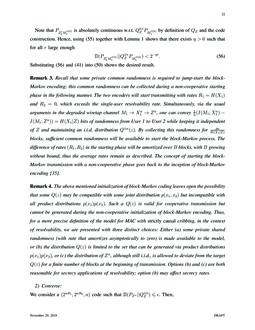 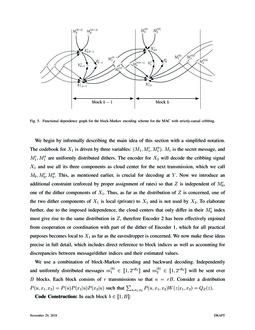 Producing an approximation of a desired statistic at a channel output via application of minimal randomness at its input has emerged as a useful building block for many problems in information theory, including source coding [1], rate distortion theory [2], coordination [3] and strong secrecy [4, 5, 6, 7, 8]. The origins of this problem can be traced back to Wyner’s work [9]

on the characterization of common randomness among two dependent random variables, in which he used a normalized

Kullback-Leibler (KL) divergence as a measure of approximation. The problem was subsequently formalized and generalized for total variation using information-spectrum methods [10] and the optimal amount of randomness was called channel resolvability. Subsequent works have simplified proofs, both for total variation [3] and KL divergence [11], and studied multi-user settings, such as multiple-access channels (MACs) with non-cooperative encoders [12, 13, 14, 15].

This paper studies the channel resolvability region for discrete memoryless multiple-access channels (MACs) with cooperating encoders; specifically, we focus on a cribbing model [16] in which one encoder has access to the input or output of the other encoder subject to various causality constraints. The cribbing model captures the essence of cooperation and produces results and insights that are independent of cooperation signaling mechanisms. A key contribution of this paper is the characterization of the channel resolvability region for four cribbing situations while approximating the output distribution according to non-normalized KL divergence: (i)  degraded message sets, (ii) non-causal cribbing, (iii) causal cribbing and (iv) strictly-causal cribbing.

In the case of non-causal cribbing, an achievability region is already available from [3, Corollary VII.8] for approximation in terms of total variation, in which case our contribution is only to derive an achievability and matching converse for KL divergence. In the case of causal and strictly-causal cribbing, we not only develop converse results but also propose an achievability scheme that handles the causality constraints with a block-Markov coding scheme; in particular, we show that the dependencies created by the block-Markov coding scheme can be hidden through appropriate recycling of secret randomness after identifying a wiretap channel embedded in the model.

In the second part of this paper, strong secrecy [17, 18] achievable rates are obtained for the multiple-access channel (MAC) with cribbing. We develop a wiretap coding scheme that achieves strong secrecy, fueled by the results in the earlier part of this paper on the resolvability of cribbing MAC. The secrecy rates for MAC with degraded message sets as well as non-causal cribbing follow from corresponding resolvability results without complication. However, a novel approach is needed for the causal and strictly causal cribbing, because the cribbing MAC codebook devised by Willems and van der Muelen [16] is not directly compatible with the randomness recycling in the resolvability codebooks under causality constraints. Accordingly, a notable contribution of this work is a new superposition coding strategy that uses all components of the cribbing signal for cooperation to achieve efficient decoding at the legitimate receiver, while at the same time forcing a part of the randomness within the cribbing signal to remain non-cooperative from the viewpoint of the eavesdropper. This feature is needed for randomness recycling and is crucial to avoid secrecy rate loss under strictly causal and causal cribbing.

Random variables are represented by upper case letters and their realizations by the corresponding lower case letters, e.g., x is a realization of the random variable X. Superscripts denote the length of a sequence of symbols and subscripts denote the position of a symbol in a sequence. Calligraphic letters represent sets, the cardinality of which is denoted by |⋅|. For example, Xn={X1,…,Xn} where Xi belongs to the alphabet X of size |X|. PX and PXY

X and X×Y, respectively. We sometimes omit the subscripts in probability distributions if they are clear from the context, i.e., we write P(x) instead of PX(x).

For two distributions P and Q on the same alphabet, the KL divergence is defined by D(P∥Q)≜∑xP(x)logP(x)Q(x) and the variational distance is defined by V(P,Q)≜∑x|P(x)−Q(x)|. Throughout the paper, log

denotes the base 2 logarithm. For an i.i.d. vector whose components are distributed according to

PX, the product distribution is denoted by P⊗nX(xn)≜∏ni=1PX(xi). The set of ϵ-strongly-typical sequences of length n with respect to PX is defined as:

We consider four scenarios for the two-user discrete memoryless MAC with cribbing (see Fig. 1). The discrete memoryless MAC (X1×X2,WZ|X1,X2,Z) consists of finite input alphabets X1 and X2, and finite output alphabet Z, together with a channel transition probability WZ|X1X2. For a joint input distribution PX1,X2 on X1×X2, the output is distributed according to QZ(z)=∑x1,x2PX1,X2(x1,x2)WZ|X1,X2(z|x1,x2). A (2nR1,2nR2,n) channel resolvability code consists of two encoders f1 and f2 with inputs M1 and M2 defined on M1=⟦1,2nR1⟧ and M2=⟦1,2nR2⟧. In the four scenarios studied in this paper, the per-symbol encoding functions are defined as follows.

In the MAC with degraded message sets (Fig. 1(a)), Encoder 2 has access to the input of Encoder 1

In the MAC with non-causal cribbing (Fig. 1(b)), Encoder 2 has non-causal access to the entire current codeword of Encoder 1

In the MAC with strictly-causal cribbing (Fig. 1(c)), Encoder 2 has access to the output of Encoder 1 with a one-symbol delay

In the MAC with causal cribbing (Fig. 1(d)), Encoder 2 has access to the output of Encoder 1 with zero delay

A rate pair (R1,R2) is said to be achievable for the discrete memoryless MAC (X1×X2,WZ|X1X2,Z) if for a given111Originally in [10] the resolvability rate was defined as “the number of random bits required per channel use in order to generate an input that achieves arbitrarily accurate approximation of the output statistics for any given input process.” More recent works consider a fixed but arbitrary QZ, leaving out the implied intersection of rate regions over different QZ. This is more convenient in several ways, including in the application of resolvability to secrecy problems where only the simulation of a certain QZ is of interest. QZ there exists a sequence of (2nR1,2nR2,n) codes such that limn→∞D(PZn∥Q⊗nZ)=0. The MAC resolvability region is the closure of the set of achievable rate pairs (R1,R2).

We first recall the known MAC resolvability region with non-cooperating encoders, which will serve as a reference to assess the benefits of cooperation.

The resolvability region for the MAC with non-cooperating encoders is the set of rate pairs (R1,R2) such that

for some joint distribution

The resolvability region in [13] was derived with respect to variational distance approximation.

The resolvability region for the MAC with degraded message sets is the set of rate pairs (R1,R2) such that

The absence of the individual rate constraint R2 is a direct consequence of the degraded message model that allows Encoder 2 to benefit from the randomness provided via R1, reducing the required individual rate constraint for User 2 to R2≥0, which is omitted. Another difference between the regions described by Theorem 1 and Theorem 2 is that the former includes a convexifying auxiliary random variable that is missing in the latter. The region described by Theorem 2 is already convex due to the larger set of available input distributions, as proved in Appendix A-A.

The resolvability region for the MAC with non-causal cribbing is the set of rate pairs (R1,R2) such that

The achievability result was derived in [3, Corollary VII.8] for approximation of the output statistics in terms of variational distance. Our contribution here is to provide achievability and converse proofs for approximation in terms of KL divergence. Compared with the MAC with degraded message sets, more randomness is required as seen by the presence of an individual rate constraint for User 2. As already discussed in [3], this stems from the impossibility for Encoder 2 to extract uniform randomness from the observation of the output of Encoder 1 at a rate exceeding H(X1). This rate region is convex (see Appendix A-B).

The resolvability region for the MAC with strictly-causal cribbing is included in the set of rate pairs (R1,R2) such that

for some joint distribution PUX1X2Z≜PUPX1|UPX2|UWZ|X1X2 with marginal QZ. An achievable region is characterized by the same rate constraints and distribution, but subject to the additional constraint H(X1|U)>I(U,X1;Z).

The strict causality constraint leads to the appearance of a new random variable U in several terms in the right hand side of the individual rate constraints, thus the individual rate constraints can be larger than Theorem 3, i.e., more needed randomness. The achievable region provided by Theorem 4 does not provably match the outer bound because the set of probability distributions available in the achievable region is smaller than in the converse, due to the additional constraint H(X1|U)>I(U,X1;Z). The rate regions defined by the inner and outer bounds are convex (see Appendix A-C).

The resolvability region for the MAC with causal cribbing is the set of rate pairs (R1,R2) such that

Theorem 5 is established from Theorem 4 using Shannon strategies as in [16], yet Theorem 5 has an achievable region that is tight against the outer bound when Theorem 4 does not. Perhaps surprisingly, this happens because the choice of random variables in the Shannon strategy automatically satisfies the constraint imposed in the achievability of Theorem 4.

In this section we use the resolvability results to study the multiple-access wiretap channel with cribbing. For each of the cribbing models previously discussed, an achievable strong secrecy rate region is presented. Consider a MAC with cribbing (X1×X2,WZ|X1,X2,Y,Z) where X1 and X2 are finite input alphabets, Y and Z are the finite output alphabets of the legitimate receiver and the wiretapper, respectively. A (2nR1,2nR2,n) code consists of two encoders f1 and f2 and a decoder g. The encoders are defined similar to (1)-(4) but the functions f1i and f2i are now stochastic and not deterministic. The decoding function at the legitimate receiver is defined as:

The probability of error at the legitimate receiver is defined as P(n)e=P((^M1,^M2)≠(M1,M2)). The strong secrecy metric adopted in this paper is the total amount of leaked confidential information per codeword, defined as L(n)=I(M1,M2;Zn).

For the multiple-access wiretap channel with degraded message sets, the following strong-secrecy rate region is achievable:

For the multiple-access wiretap channel with non-causal cribbing, the following strong-secrecy rate region is achievable:

For the multiple-access wiretap channel with strictly-causal cribbing, the following strong-secrecy rate region is achievable:

Recall the resolvability achievable rate region under the strictly causal cribbing had a constraint H(X1|U)>I(U,X1;Z) on the allowable probability distributions. This constraint is implicit in Proposition 3 in the form of the non-negativity constraint on R1.

For the multiple-access wiretap channel with causal cribbing, the following strong-secrecy rate region is achievable:

For m1∈⟦1,2nR1⟧ and m2∈⟦1,2nR2⟧, let Xn1(m1) and Xn2(m1,m2) denote the random variables representing the randomly generated codewords. The average KL divergence is:

where (a) follows by Jensen’s inequality. We finally write the right-hand side of (24) as Ψ1+Ψ2 with

where (a) follows because conditioning does not increase entropy and (b) follows by Jensen’s Jensen’s inequality and the convexity of D(⋅||⋅) with ~PZ(z)≜1n∑ni=1PZi(z). First, note that