In this paper, we propose a new cooperative driving strategy for connected and automated vehicles (CAVs) at unsignalized intersections. Based on the tree representation of the solution space for the passing order, we combine Monte Carlo tree search (MCTS) and some heuristic rules to find a nearly global-optimal passing order (leaf node) within a very short planning time. Testing results show that this new strategy can keep a good tradeoff between performance and computation flexibility. 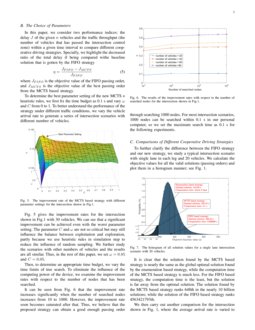 Connected and Automated Vehicles (CAVs) are believed to be a key role in the next-generation transportation systems [1]. With the aid of vehicle-to-vehicle (V2V) communication, CAVs can share their driving states (position, velocity, etc.) and intentions with adjacent vehicles [2, 3] to better coordinate their motions to alleviate traffic congestion and improve traffic safety.

In the last decade, various strategies had been proposed to make optimal coordination for CAVs at a typical driving scenario: unsignalized intersection. It is pointed out in [4] and [5] that the key problem is to determine the optimal order of CAVs that passed the intersection. As summarized in [6], there are two kinds of cooperative driving strategies, planning based and ad hoc negotiation based, for determining the passing order.

. There are two equivalent formulations of the problem. Most state-of-the-art studies formulate the problem as a mixed integer linear programming problem of vehicles’ passing time scheduling

[1, 8]. The objective is usually set to minimize the total delay of all CAVs. Li et al. showed that we can also view this problem as a tree search problem. Each tree node indicates a special (partial) passing order. The equivalent objective is to find the leaf node corresponds to the minimum total delay of all CAVs [4, 5]. It was shown in [9] that some planning based strategies work well for ramp metering scenarios. However, the time to enumerate all the nodes increases sharply as the number of vehicles increases, especially for unsignalized intersection scenarios. This problem hinders their applications in practice.

Ad hoc negotiation based strategies aim to find an acceptable passing order using some heuristic rules within a very short time. For example, Stone et al. proposed autonomous intersection management (AIM) cooperative driving strategy which divides the intersection into grids (resources) and assigns these grids to CAVs in a roughly First-In-First-Out (FIFO) manner [10, 11]. This strategy has several variations, including reservation strategy [12]. However, as shown in [6], the passing orders found by ad hoc negotiation based strategies were not good enough in many situations.

To keep a good tradeoff between performance and computation flexibility, we propose a new cooperative driving strategy based on the tree representation of the solution space for the passing order. Its key idea is to use the limited planning time to explore the nodes that are potential to be the optimal solution. To this end, we combine Monte Carlo tree search (MCTS) and some heuristic rules to accelerate the searching process, since the solution space of this problem has special structures to be exploited. Testing results show that we can find a nearly global-optimal passing order within a short enough planning time.

To give a better presentation of our finding, the rest of this paper is arranged as follows. Section II formulates the problem and briefly reviews the existing strategies. Section III presents the new strategy. Section IV validates the effectiveness of the proposed strategy via numerical testing results. Finally, Section V gives concluding remarks.

To simplify the problem, we adopt the following assumptions:

The cooperative driving strategy aims to minimize the total delay of vehicles by scheduling the velocity and acceleration profiles of all vehicles [14]. So, we can get the following optimization problem

To directly attack Problem (1) often leads to a mixed integer linear programming (MILP) problem whose computation time increases exponentially with the increase of the number of vehicles [8, 9].

Let us take the intersection scenario shown in Fig. 2 as an example to explain how to build the tree representation of the solution space gradually . At first, we set the passing order in the root node to be empty. Then, each direct child node of the root node (in the second layer) refers to one index symbol that indicates the first vehicle in a special passing order. The nodes in the third layer refer to one string consisting of two indices symbols that indicate the first two vehicles in a special passing order. Similarly, the child nodes expand their child nodes, and all possible passing order are generated as leaf nodes in the bottom layer of the solution tree as shown in Fig. 3.

If a (partial) passing order is given, the desired arrival times for all the vehicles that has been covered in this (partial) passing order can be directly derived by the following Passing Order to Trajectory Interpretation Algorithm. Our objective turns to seek the leaf node that corresponds to the shortest total delay. Moreover, the total delay values of leaf nodes can be used to evaluate the potential of their parent nodes in a backpropagation way. This method provides us a chance to find a nearly global-optimal leaf node but only search a small part of the whole tree.

In Algorithm 1, P(i) is the ith element in the input (partial) passing order, tmax,z is the largest arrival time that the subzone z has been occupied. Δj,a is the minimum safety gap between two consecutive vehicles passing through the same subzone. Obviously, the time complexity of Algorithm 1 is O(n). A detailed explanation of Algorithm 1 can be found in our previous report [7].

It is usually impossible to expand all the nodes of the solution tree within the limited computation budget, when there are lots of vehicles in the control zone. In this paper, we use MCTS + heuristic rules to select nodes with the potential to be the optimal solution. The recent success of the MCTS method in the game of Go shows it is an effective way to deal with such problems [15, 16].

Iii-a The Classical MCTS Based Strategy

In MCTS, each node in the formulated tree will be assigned a score to evaluate its potential. The score of a leaf node is equal to the total delay of its corresponding passing order. MCTS uses these scores to determine which branch of tree to explore.

During the building process of the search tree, the state-of-the-art best passing order is continuously updated. As soon as the computation budget is reached, the search terminates and returns the state-of-the-art best passing order. The planned arrival times of vehicles can be determined by using Algorithm 1. The velocity and acceleration profiles of each vehicle plan will be finally calculated by using the motion planning method proposed in [14].

We can see that the performance of the proposed strategy is influenced by the choice of the parameters including the maximum search time and two weighting parameters C and ω. We will discuss how to choose these parameters in Section IV below.

We design three experiments to determine the best parameter set for the new cooperative driving strategy and compare it with some classical ones. These experiments are conducted for the intersection with three lanes in each leg shown in Fig. 1. The mandatory signs stipulate the permitted directions for each lane. According to the geometry of the intersection, the conflict zone is further divided into 36 subzones. The vehicles arrival is assumed to be a Poisson process. We vary the mean value of this Poisson process to test the performance of the proposed strategy under different traffic demands. The vehicles arrival rates at all lanes are the same unless otherwise specified. It should be pointed out that we had tested other intersections with different road geometries and various vehicle arrival patterns, but the conclusions remain unchanged.

To accurately describe the total delays of vehicles, we adopt the point-queue model in the simulation [6, 19]. The model assumes vehicles travel in free flow state until it gets to the boundary of the intersection we study. If the preceding vehicle leaves enough spaces, the first vehicle in the point-queue will dequeue and enter the intersection. Otherwise, it will stay in the virtual queue. Each lane has an independent point-queue.

In this paper, we reschedule the passing order of all the vehicles within the control zone every 2 seconds. As suggested in [6], we set the minimum safety gap between two consecutive vehicles passing through the same subzone as a slightly enlarged constant as

to avoid the collisions caused by position measurement errors and communication delay.

Iv-B The Choice of Parameters

In this paper, we consider two performance indices: the delay J of the given n vehicles and the traffic throughput (the number of vehicles that has passed the intersection control zone) within a given time interval to compare different cooperative driving strategies. Specially, we highlight the decreased ratio of the total delay if being compared withe baseline solution that is gotten by the FIFO strategy

To determine the best parameter setting of the new MCTS + heuristic rules, we first fix the time budget as 0.1 s and vary ω and C from 0 to 1. To better understand the performance of the strategy under different traffic conditions, we vary the vehicle arrival rate to generate a series of intersection scenarios with different number of vehicles.

Fig. 5 gives the improvement rates for the intersection shown in Fig.1 with 30 vehicles. We can see that a significant improvement can be achieved even with the worst parameter setting. The parameter C and ω are not so critical but may still influence the balance between exploitation and exploration, partly because we use heuristic rules in simulation step to reduce the influence of random sampling. We further study the scenarios with other numbers of vehicles and the results are all similar. Thus, in the rest of this paper, we set ω=0.85 and C=0.05.

Then, to determine an appropriate time budget, we vary the time limits of tree search. To eliminate the influence of the computing power of the device, we examine the improvement rates with respect to the number of nodes that has been searched.

It can be seen from Fig. 6 that the improvement rate increases significantly when the number of searched nodes increases from 10 to 1000. However, the improvement rate soon becomes saturated after that. Thus, we believe that the proposed strategy can obtain a good enough passing order through searching 1000 nodes. For most intersection scenarios, 1000 nodes can be searched within 0.1 s in our personal computer, so we set the maximum search time as 0.1 s for the following experiments.

To further clarify the difference between the FIFO strategy and our new strategy, we study a typical intersection scenario with single lane in each leg and 20 vehicles. We calculate the objective values for all the valid solutions (passing orders) and plot them in a histogram manner; see Fig. 1.

We then carry out another comparison for the intersection shown in Fig. 1, where the average arrival rate is varied to explore the influence of different traffic demands. For each arrival rate, we simulate 20-minute. It is obvious that our new strategy further reduces the average delay and improves the traffic throughput in all situations.

In this paper, we propose a cooperative driving strategy that combines Monte Carlo simulation and heuristic rule simulation to accelerate the search of the passing order. This new method can quickly learn the tree structure knowledge of the given scenario and find a nearly optimal solution with a short time. Although we only discuss the schedule of vehicles at unsignalized intersections, this method can be easily adapted to other scenarios (e.g., ramping areas and working zones). We are currently building several automated vehicle prototypes so that we can test our new strategy in field studies in the near future.