A convolutional sequence to sequence non-intrusive load monitoring model is proposed in this paper. Gated linear unit convolutional layers are used to extract information from the sequences of aggregate electricity consumption. Residual blocks are also introduced to refine the output of the neural network. The partially overlapped output sequences of the network are averaged to produce the final output of the model. We apply the proposed model to the REDD dataset and compare it with the convolutional sequence to point model in the literature. Results show that the proposed model is able to give satisfactory disaggregation performance for appliances with varied characteristics. 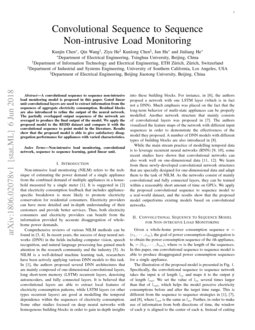 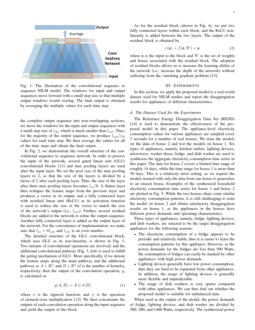 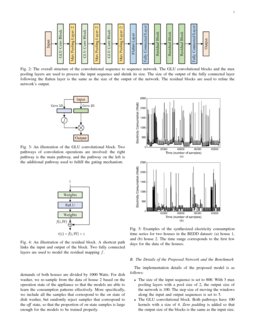 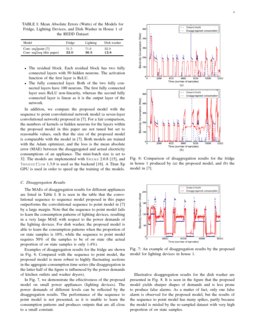 With the increased demand on economy and efficiency of measurement techn...
Gan Zhou, et al. ∙

Attention is a commonly used mechanism in sequence processing, but it is...
Andis Draguns, et al. ∙

Comprehensive reviews of various NILM methods can be found in [3, 4]

. In recent years, the success of deep neural networks (DNN) in the fields including computer vision, speech recognition, and natural language processing has gained much attention in the research community and the industry

. As NILM is a well-defined machine learning task, researchers have been actively applying various DNN models to this task. In

, the authors proposed several DNN architectures that are mainly composed of one-dimensional convolutional layers, long short-term memory (LSTM) recurrent layers, denoising autoencoders, and fully connected layers. It is believed that convolutional layers are able to extract local features of electricity consumption patterns, while LSTM layers (or other types recurrent layers) are good at modelling the temporal dependence within the sequences of electricity consumption. Some other studies focused on deep neural networks with homogenous building blocks in order to gain in-depth insights into these building blocks. For instance, in

[6], the authors propsed a network with one LSTM layer (which is in fact not a DNN). Much emphasis was placed on the fact that the long-term behavior of multi-state appliances can be properly modelled. Another network structure that mainly consists of convolutional layers was proposed in [7]. The authors visualized the feature maps of the network with different input sequences in order to demonstrate the effectiveness of the model they proposed. A number of DNN models with different types of building blocks are also introduced in [8].

The illustration of the proposed model is presented in Fig. 1. Specifically, the convolutional sequence to sequence network takes the input x of length lin and maps it to the output y of length lout. We set the value of lin several times larger than that of lout, which helps the model perceive electricity consumptions before and after the target time range. This is different from the sequence to sequence strategies in [1], [7], and [8], where lout is the same as lin. Further, in order to make use of information from both directions of time, the window of each y is aligned to the center of each x. Instead of cutting the complete output sequence into non-overlapping sections, we move the windows for the input and output sequences with a small step size of sΔ, which is much smaller than lout. Thus, for the majority of the output sequence, we produce lout/sΔ values for each time step. We then average the values for all of the time steps and obtain the final output.

8. A flatten layer then reshapes the feature maps from the previous layer and produces a vector as its output, and a fully connected layer with rectified linear unit (ReLU) as its activation function is used to reduce the size of the vector to match the size of the network’s output (i.e.,

lout). Further, several residual blocks are added to the network to refine the output sequence. Another fully connected layer is added as the output layer of the network. For the convenience of implementation, we make sure that lin=8lout and lout is an even number.

⊗ is the operation of element-wise multiplication [12]. We then concatenate the outputs of each convolution operation along the input sequence and yield the output of the block.

where z is the input to the block and W

In this section, we apply the proposed model to a real-world dataset used for NILM studies and report the disaggregation results for appliances of different characteristics.

Iii-a The Dataset Used for the Experiments

The Reference Energy Disaggregation Data Set (REDD) [14] is used to demonstrate the effectiveness of the proposed model in this paper. The appliance-level electricity consumption values for various appliances are sampled every 3 seconds for a number of real houses. We train the models on the data of house 2 and test the models on house 1. Six types of appliances, namely, kitchen outlets, lighting devices, microwave, washer dryer, fridge, and dish washer are used to synthesize the aggregate electricity consumption time series in this paper. The data for house 2 covers a limited time range of roughly 14 days, while the time range for house 1 is more than 30 days. This is a relatively strict setting, as we require the models trained with only the data from one house to generalize to an unseen house. Examples of the synthesized household electricity consumption time series for house 1 and house 2 are plotted in Fig. 5. While the two houses share some similar electricity consumption patterns, it is still challenging to train the model on house 2 and obtain satisfactory disaggregation results on house 1, as the appliances in the houses have different power demands and operating characteristics.

Three types of appliances, namely, fridge, lighting devices, and dish washers, are selected to be the target disaggregation appliances for the following reasons:

When used as the output of the model, the power demands of fridge, lighting devices, and dish washer are divided by 500, 200, and 1400 Watts, respectively. The synthesized power demands of both houses are divided by 1000 Watts. For dish washer, we re-sample from the data of house 2 based on the operation state of the appliance so that the models are able to learn the consumption patterns effectively. More specifically, we include all the samples that correspond to the on state of dish washer, but randomly reject samples that correspond to the off state, so that the proportion of on state samples is large enough for the models to be trained properly.

Iii-B The Details of the Proposed Network and the Benchmark

The implementation details of the proposed model is as follows:

In addition, we compare the proposed model with the sequence to point convolutional network model (a seven-layer convolutional network) proposed in [7]. For a fair comparison, the numbers of kernels or hidden neurons for the layers within the proposed model in this paper are not tuned but set to reasonable values, such that the size of the proposed model is comparable with the model in [7]. Both models are trained with the Adam optimizer, and the loss is the mean absolute error (MAE) between the disaggregated and actual electricity consumptions of an appliance. The mini-batch size is set to 32. The models are implemented with Keras 2.0.8 [15], and Tensorflow 1.3.0 is used as the backend [16]. A Titan Xp GPU is used in order to speed up the training of the models.

Examples of disaggregation results for the fridge are shown in Fig. 6. Compared with the sequence to point model, the proposed model is more robust to highly fluctuating sections in the aggregate consumption time series (the disaggregation in the latter half of the figure is influenced by the power demands of kitchen outlets and washer dryers).

In Fig. 7, we demonstrate the effectiveness of the proposed model on small power appliances (lighting devices). The power demands of different levels can be reflected by the disaggregation results. The performance of the sequence to point model is not presented, as it is unable to learn the consumption patterns and produces outputs that are all close to a small constant.

Illustrative disaggregation results for the dish washer are presented in Fig. 8. It is seen in the figure that the proposed model yields sharper shapes of demands and is less prone to produce false alarms. As a matter of fact, only one false alarm is observed for the proposed model, but the results of the sequence to point model has many spikes, partly because the model is misled by the re-sampled dataset with very high proportion of on state samples.

In this paper, we propose a sequence to sequence NILM framework based on convolutional networks. The mapping from a long sequence of aggregate power consumption to a short sequence of the power consumption of an individual appliance is facilitated by the GLU convolution blocks and max pooling layers. Further refinement of the output sequence is fulfilled by residual blocks of fully connected layers. The partial-overlapping output sequences are filtered to construct final disaggregation results. The experiments in this paper show that the proposed NILM framework outperforms existing NIML models based on convolutional neural networks. Several future paths are worth taking:

We are very grateful for the support of NVIDIA Corporation with the donation of the Titan Xp GPU used for this research.