Medical image slice interpolation is an active field of research. The methods for this task can be categorized into two broad groups: intensity-based and object-based interpolation methods. While intensity-based methods are generally easier to perform and less computationally expensive, object-based methods are capable of producing more accurate results and account for deformable changes in the objects within the slices. In this paper, performance of two well-known object-based interpolation methods is analyzed and compared. Here, a deformable registration-based method specifically designed for medical applications and a learning-based method, trained for video frame interpolation, are considered. While the deformable registration-based technique is capable of accurate modeling of the changes in the shapes of the objects within slices, the learning-based method is able to produce results with similar accuracy, but with a much sharper appearance in a fraction of the time. This is despite the fact that the learning-based approach is not trained on medical images and rather is trained using regular video footage. However, experiments show that the method is capable of accurate slice interpolation results. 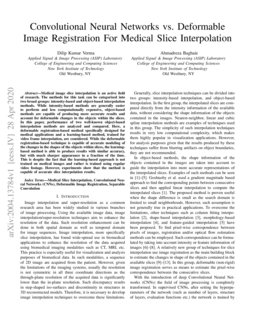 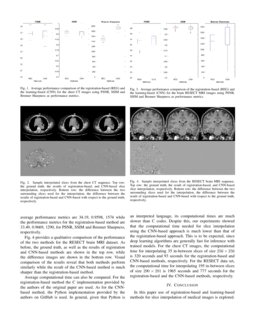 An Optimization Method For Slice Interpolation Of Medical Images

have been proposed. To find pixel-wise correspondence between pixels of images, registration and/or optical flow estimation methods can be employed. Such correspondence can be formulated by taking into account intensity or feature information of images

[3, 1, 2]. A relatively new group of techniques for slice interpolation use image registration as the main building block to estimate the changes in shape of the objects contained in the available slices [19, 7, 15, 4, 11]. In this group, deformable (non-rigid) image registration serves as means to estimate the pixel-wise correspondence between the consecutive slices.

With the introduction of deep Convolutional Neural Networks (CNNs) the field of image processing is completely transformed. In supervised CNNs, after setting the hyperparameters of the network (such as number of layers, structure of layers, evaluation functions etc.) the network is trained by introducing sets of data and the parameters of the network are trained to reduce the amount of error between the network’s output and the ground truth. Examples of such techniques can be found in 3D slice interpolation of medical images as well. Chen et al

[6] proposed a 3D Densely Connected Super-Resolution Network (DCSRN) for slice interpolation of medical images. Peng et al [18] on the other hand proposed to use a 2D CNN for interpolating anisotropic brain MRI data to enhance the lower resolution along the through-plane direction. The proposed method takes advantage of CNN-based data fusion and refinement to achieve the final results. In the work of Kudo et al [12] use of conditional Generative Adversarial Networks (GANs) is explored for super-resolution of CT images

In this paper, we explore use of CNN-based frame interpolation techniques for slice interpolation of biomedical images. More specifically, we aim to analysis the performance of adaptive separable convolutions for video frame interpolation proposed in the work of Niklaus et al [17] and compare it with the registration-based approach proposed by Leng et al [15]

. One major challenge in using deep learning-based methods in biomedical application is the limitation in access to abundance of data required to train the networks. Given this, we aim to see whether the pre-trained video frame interpolation technique which is trained on regular video footage without any human annotation can be used for biomedical slice interpolation.

The rest of the paper is organized as follows. In section 2, an overview of both video frame interpolation and registration-based slice interpolation methods is provided. Section 3 contains experiments using biomedical volume data and quantitative and qualitative performance comparisons are presented. Section 4 concludes the paper.

The slice interpolation proposed in [15] works based on multi-resolution deformable image registration. The registration model proposed in the approach is as follows. Given two input images I0 and I1, they are represented as continuous functions I0(X) and I1(X), in which X=(x,y) defined in the domain Ω=[0,1]2 using bilinear interpolation. The model aims to compute two displacement maps, U0 and U1 that minimize the following energy function:

In this equation, Ukx(X) and Uky(X) are first-order derivatives of the Uk(X) with respect to x and y, respectively. The first term in the energy function is the fidelity term which aims to minimize the difference between the two deformed input images. In this formulation, bi-directional matching is used for improved performance. Also to balance the mismatch endurance of the squared intensity difference (SSD) in low-intensity and high-intensity regions, a modified SSD is employed with c as a positive constant set empirically. Because of the ill-posedness of the registration problem, the energy function needs to be regularized by introducing smoothing functions. Here the first-order regularization and the area regularization terms are used respectively. These terms’ contributions in the final energy function are weighted empirically according to given images. The registration model is minimized using a geometric flow-based method. After the derivation of the registration model, the in-between slices are computed using linear or cubic spline interpolation. The avid reader is referred to the original paper [15] for more details on the implementation.

The goal of the CNN-based video frame interpolation method is to synthesize a frame in-between the two input frames I0 and I1. For each output pixel in the interpolated frame, a pair of 2D convolution kernels are estimated, K1(X) and K2(X), to compute the intensity value of the interpolated pixel as:

In this formulation, P1 and P2 are patches centered at location X=(x,y) in the input frames and ⊗ is the convolution operator. The kernels are estimated to represent both displacement and re-sampling information for the interpolation procedure. Given the high computational complexity of estimating these 2D kernels for large displacements, the aim is to estimate a pair of 1D kernels, for both the horizontal and vertical directions, for each 2D kernel as <k1v,k1h> and <k2v,k2h> where:

convolution kernels with Rectified Linear Units (ReLU) combined with average pooling are used. As for the layers in the expanding component, use of bilinear interpolation is considered.

A combination of two loss functions is used for training of the network. The first is based on the

The training is done by randomly selecting 250,000 data samples, each containing 150×150 patches from high-quality YouTube videos that contain sufficiently large motions. Random data augmentation is done on the fly. As for the kernel sizes, kernels of size 51 are used. For more details on the implementation and training of the network, the reader is referred to the original work [17].

To assess the performance of the two methods for slice interpolation of biomedical volume images, two sets of data are used here. For the first set, a sequence of chest CT images is considered [15]. The chest CT sequence consists of 69 slices with size 256×256

. The even slices are removed and then interpolated by odd slices using the two registration and CNN based methods. The second data set (RESECT) is a series of brain MRI images consisting of 391 slices of size

290×281 [22]. Similar to the chest sequence, here, the even slices are removed and the odd slices are used for interpolation of the missing slices.

where f and ^f are the ith pixel of the ground truth and estimated images respectively, and N is the total number of pixels. Having the MSE, PSNR can be defined as:

where L is the dynamic range of pixel intensities in the images.

For the SSIM, three different components play significant roles: luminance, contrast ratio and structure. The simplified equation for SSIM can be written as [21]:

are the variances of the ground truth and the estimated image, respectively while the

For the Brenner Sharpness measure, the squared sum of the image’s first derivatives in both horizontal and vertical directions is calculated [5].

Fig. 3 shows the average performance of the two methods for the RESECT brain MRI dataset. Similar to Fig. 1, on the left the average PSNR is shown while average SSIM and average Brenner Sharpness are shown in the middle and right panels of the figure. For this dataset, the CNN-based method’s average performance metrics are 34.19, 0.9598, 1574 while the performance metrics for the registration-based method are 33.49, 0.9669, 1290, for PSNR, SSIM and Brenner Sharpness, respectively.

In this paper use of registration-based and learning-based methods for slice interpolation of medical images is explored. For the registration-based technique, the slice interpolation is formulated as a linear/cubic interpolation combined with a deformable registration to model the variations in the shapes of the objects contained in the available slices [15]. As for the learning-based approach, a deep convolutional neural network architecture is used to account for both displacement analysis and frame synthesize by taking advantage of separable convolutional kernels to reduce the computational complexity, in both training and inference steps [17]. Even though the learning-based method is trained on regular video footage, and not on actual medical volume images, it is capable of producing highly accurate results in a fraction of computational time when compared with the registration-based method. This shows the great capability of the learning-based methods in such applications. Given that applicability of these techniques in medical image processing is ultimately to help in improving the processes for analysis and visualizations, it is necessary to incorporate domain knowledge into the models for a more truthful performance. This is left for future research.