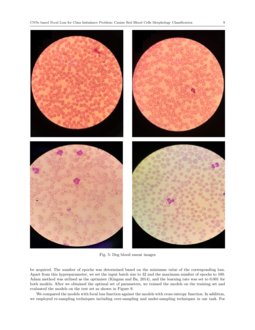 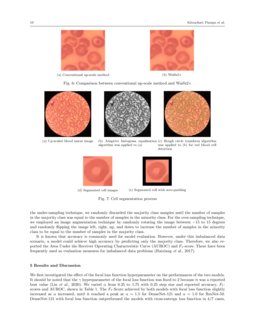 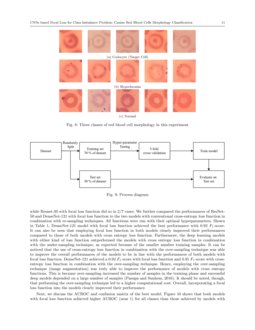 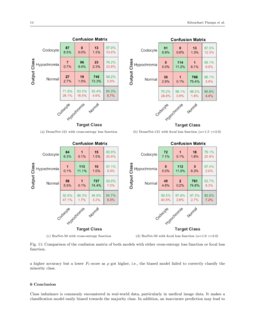 This imbalanced data problem has been reported to reduce the performance of some classifiers (Japkowicz and Stephen, 2002). Most existing learning algorithms did not perform well for minority class (Rahman and Davis, 2013). For over two decades, many class imbalance learning techniques have been developed (Krawczyk, 2016). Class imbalance learning can be divided into two main groups, namely, data-level and algorithm-level (Zhang et al., 2018). Common approaches in data-level group are resampling approaches (Chawla et al., 2002; García and Herrera, 2009; Garcı et al., 2012; Han et al., 2005; Lim et al., 2016; He et al., 2008; Mazurowski et al., 2008) that aim to balance the training data. Re-sampling techniques can be further divided into three groups depending on the balancing class distribution method (Haixiang et al., 2017):

Lee and Chen (2014) proposed a hybrid neural network classifier to separate between normal and abnormal red blood cells based on their shape and texture features. The accuracy of the proposed method in classifying normal and abnormal was 88.25 %. Moreover, they attempted to classify four types of disease—Burr cell, Sickle cell, Horn cell, and Elliptocyte cell—and achieved 91 % accuracy. Chy and Rahaman (2019)

proposed an automatic detection and classification system for white blood cells from peripheral blood images. They first used different values of red and blue colours (R-B image) to separate white blood cells from red blood cells and then converted R-B image to binary image with a threshold value, making the nucleus more apparent, followed by a morphology operation to remove slight noise. Subsequently, a granularity feature (pairwise rotation invariant co-occurrence local binary pattern or PRICoLBP feature) was extracted to feed into the SVM to separate two classes—eosinophils and basophils—from one another. Consequently, CNN was applied to the other classes to extract features. The deep-learned features were inputted into a random forest classifier to classify the other three types of white blood cells: neutrophil, monocyte and lymphocyte. The proposed method achieved 92.8 % classification accuracy.

Tiwari et al. (2018) developed a deep learning model to handle a blood cell classification problem. They applied data augmentation to each white blood cell class, from 400 images to 3000 images, to enlarge the training data. Furthermore, they compared their proposed model with Naïve Bayes and SVM. The results show that their proposed model outperformed the traditional machine learning models.

For the class imbalance problem, many research studies have mainly concentrated on two levels: data-level and algorithm-level (Garcia et al., 2007).

For algorithm level, an algorithm that emphasises the minority class was employed. A common approach for this kind of level is cost-sensitive learning. Most cost functions give equal importance to each class (Garcia et al., 2007). Therefore, a proper weight needs to be specified for each class. Zong et al. (2013) applied cost-sensitive learning with ELM. They presented weighted ELM for imbalance learning. Their experimental results show that the weighted ELM performed better than the unweighted ELM. Zhang et al. (2018)

aimed to tackle class imbalance problem by weighting the cost of each class in Deep Belief Network with an Evolutionary Algorithm. Their proposed method performed significantly better than the others on 58 benchmark datasets and a real-world dataset. Another approach is to modify the loss function in order to make the classifier more sensitive toward minority classes.

Cross-entropy loss function is generally used in a deep learning classification model. It is defined as:

is the prediction probability of the model, and

In practice, a focal loss function uses an α-balanced variant of focal loss:

γ is a focusing parameter that reshapes the loss function to down-weight easy samples and makes the model focus on hard samples. Hard samples are those samples that produce large errors; a model misclassifies the samples with a high probability. Figure 1 shows the effect of a hyper-parameter on focal loss. When γ=0, the function behaves like CE—presented as a solid line in the figure.

For cross-entropy loss, when a model classifies easy samples—samples in the majority class—to a correct class with pt ≥ 0.5, the loss value is low. Although the loss is low, when it is summed over a large number of easy samples, these loss values may overwhelm the rare class in an imbalance data scenario (Lin et al., 2020). This can lead to a biased model towards the majority class.

In focal loss, in the case that the ground truth label is 1 and a sample is correctly classified with a high probability, the value of (1−pt) is small. When this term is raised to the power of γ, the value of the modulating factor gets smaller and causes the loss from cross-entropy to be smaller. In contrast, if the model misclassifies a sample with low probability, the modulating factor is large, close to 1; therefore, the loss from cross-entropy remains the same.

In this research, we aimed to tackle the class imbalance problem in red blood cell morphology classification by using CNN in conjunction with a focal loss function. Many deep CNN architectures have been developed in the past decade. We selected ResNet (He et al., 2016) and DenseNet (Huang et al., 2017)

models because both architectures have already been evaluated on ImageNet

. To solve this vanishing gradient problem,

He et al. (2016) proposed a ResNet model. ResNet architecture has a residual block that preserves the gradient. This is done by adding the input x to the output after a few weight layers as shown in Figure 2, enabling the model to pass useful knowledge from a previous layer to the next. Therefore, this enables the model to have less training error as the network is getting deeper. Furthermore, a ResNet model converges faster compared to a plain network. The experimental results show that ResNet-50, ResNet-101, and ResNet-152 performed better than VGG-16, GoogLeNet (Inception-v1), and PReLU-Net in top-1 error and top-5 error on ImageNet (He et al., 2016). Here, we selected ResNet-50, that is 50 layers deep, for our experiment because it is the smallest model. The architecture is shown in Figure 3.

DenseNet utilises dense connections, in which each layer receives extra inputs from all preceding layers, and also pass its own feature-map to all subsequent layers as shown in Figure 4. In ResNet, features are combined through summation before passing into a layer. On the other hand, DenseNet combines features by concatenating them to all subsequent layers. Each layer gains the collective knowledge of all other layers, resulting in a thinner and compact network. Moreover, DenseNet clearly achieved a higher accuracy with a smaller number of parameters than ResNet did (Huang et al., 2017). We employed DenseNet-121 in this research because it is the smallest available architecture. The model is shown in Figure 4.

Since the default size of the input image for both ResNet-50 and DenseNet-121 was 224×224 pixels, we fed, one at a time, a single blood cell image with this size into the models. Therefore, we normalised the blood smear images to a size that each blood cell matches 224×224 pixels. Therefore, the input images were required to be enlarged by a scaling factor. A scaling factor was calculated by dividing 224 with the diameter of the red blood cell. If we simply applied the conventional up-scaling method, each image would not be clear and would be full of noise (as shown in Figure 5(a)

). Then, we employed an image super-resolution tool called “Waifu2

×” which was based on the CNNs (Dong et al., 2015) to up-scale all images. This technique enhanced the overall resolution of the output images as shown in Figure 5(b).

. We added zero-padding to all segmented red blood cell images to make them

224×224 in size as shown in Figure 6(e). We describe the data pre-processing procedure in Algorithm 1. All red blood cells were labelled and distinguished into three main groups by the pathologist. Our dataset contained 3,392 cell images divided into three classes: (i) 345 Codocyte cells (Target cells), (ii) 356 Hypochromia cells, and (iii) 2,691 Normal cells. Examples of red blood cell morphology images are shown in Figure 8.

We first randomly split 70 % of our dataset as a training set and the remaining 30 % as a test set. Since there are a number of hyper-parameters to be tuned, we utilised five-fold cross-validation to evaluate the settings of the models on the training set. In the focal loss function, there are two hyperparameters, namely, α and γ as shown in (4). In this experiment, we simply set γ=2 because it worked the best in (Lin et al., 2020). Therefore, we concern only on α

It is known that accuracy is commonly used for model evaluation. However, under this imbalanced data scenario, a model could achieve high accuracy by predicting only the majority class. Therefore, we also reported the Area Under the Receiver Operating Characteristic Curve (AUROC) and

F1-score. These have been frequently used as evaluation measures for imbalanced data problems (Haixiang et al., 2017).

Next, we discuss the AUROC and confusion matrix of the best model. Figure

where Ci is the set of samples in class i, maxi(|Ci|) and mini(|Ci|) are the maximum and the minimum number of samples in all classes. Then, we randomly split 70 % of each manipulated dataset to be a training set and the remaining 30 % to be a test set. The model was then trained with the same settings described in Section 4.2.

Employing the focal loss function on DenseNet-121 and ResNet-50 yielded better performances than using cross-entropy loss function for all ρ, resulting in higher F1-scores as shown in Table 3. Nevertheless, there were some cases that the models achieved a higher F1-score but a lower accuracy and AUROC, e.g., DenseNet-121 with ρ=37.90 and ResNet-50 with ρ=11.35. Owing to these cases, it can be interpreted that the focal loss function made the deep CNN models learn to classify each class equally without biased towards the majority class. In contrast, the cross-entropy loss function provided a higher accuracy and AUROC score but lower F1-score, resulting in a biased model towards the majority class.

We would like to thank the Veterinary Teaching Hospital, Kasetsart University, Hua Hin, Thailand for providing us with stained glass slides of peripheral blood smear and for labelling the dataset.