Emotion recognition based on electroencephalography (EEG) has received attention as a way to implement human-centric services. However, there is still much room for improvement, particularly in terms of the recognition accuracy. In this paper, we propose a novel deep learning approach using convolutional neural networks (CNNs) for EEG-based emotion recognition. In particular, we employ brain connectivity features that have not been used with deep learning models in previous studies, which can account for synchronous activations of different brain regions. In addition, we develop a method to effectively capture asymmetric brain activity patterns that are important for emotion recognition. Experimental results confirm the effectiveness of our approach. 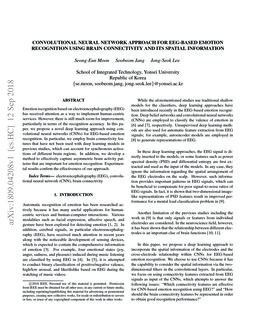 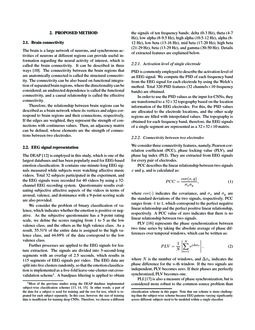 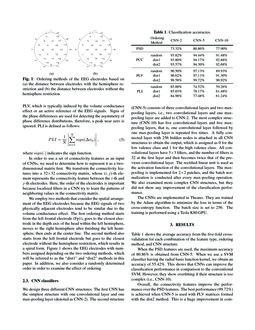 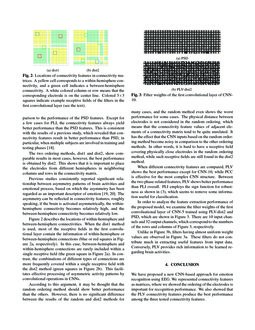 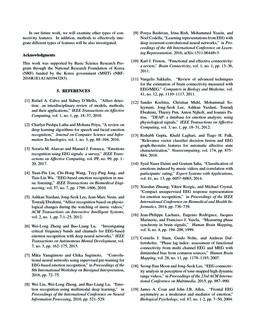 Automatic recognition of emotion has been researched actively because it has many useful applications for human-centric services and human-computer interactions. Various modalities such as facial expression, affective speech, and gesture have been explored for detecting emotion [1, 2]. In addition, cerebral signals, in particular electroencephalography (EEG), have received much attention in recent years along with the noticeable development of sensing devices, which is expected to contain the comprehensive information of emotion [3]

. For example, four emotional states (joy, anger, sadness, and pleasure) induced during music listening are classified by using EEG in

[4]. In [5], it is attempted to conduct binary classification of positive/negative valence, high/low arousal, and like/dislike based on EEG during the watching of music videos.

While the aforementioned studies use traditional shallow models for the classifiers, deep learning approaches have been introduced recently in the EEG-based emotion recognition. Deep belief networks and convolutional neural networks (CNNs) are employed to classify the valence of emotion in

[8] to generate representations of EEG.

In these deep learning approaches, the EEG signal is directly inserted to the models, or some features such as power spectral density (PSD) and differential entropy are first extracted and used as the input of the models. In any case, they ignore the information regarding the spatial arrangement of the EEG electrodes on the scalp. However, such information provides important patterns in EEG signals, which can be beneficial to compensate for poor signal-to-noise ratios of EEG signals. In fact, it is shown that two-dimensional image-like representations of PSD features result in improved performance for a mental load classification problem in [9].

Another limitation of the previous studies including the work in [9] is that only signals or features from individual electrodes are considered. In the neuroscience field, however, it has been shown that the relationship between different electrodes is an important clue of brain functions [10, 11].

In this paper, we propose a deep learning approach to incorporate the spatial information of the electrodes and the cross-electrode relationship within CNNs for EEG-based emotion recognition. We choose to use CNNs because it has the capability to consider the spatial information via the two-dimensional filters in the convolutional layers. In particular, we focus on using connectivity features extracted from EEG signals as input of the CNNs, which attempts to answer the following issues: “Which connectivity features are effective for CNN-based emotion recognition using EEG?” and “How should the brain connectivity features be represented in order to obtain good recognition performance?”

The brain is a large network of neurons, and synchronous activities of neurons at different regions can provide useful information regarding the neural activity of interest, which is called the brain connectivity. It can be described in three ways

The DEAP [12] is employed in this study, which is one of the largest databases and has been popularly used for EEG-based emotion classification. It contains one-minute-long EEG signals measured while subjects were watching affective music videos. Total 32 subjects participated in the experiment, and the EEG signals were recorded for 40 videos by using a 32-channel EEG recording system. Questionnaire results evaluating subjective affective aspects of the videos in terms of arousal, valence, and dominance with a 9-point scoring scale are also provided.

Further processes are applied to the EEG signals for feature extraction. The signals are divided into 3-second-long segments with an overlap of 2.5 seconds, which results in 115 segments of EEG signals per video. The EEG data are split into five clusters randomly, so that the emotion classification is implemented as a five-fold leave-one-cluster-out cross-validation scheme111Most of the previous studies using the DEAP database implemented subject-wise classification schemes [13, 14, 15]. In other words, a part of the data for a subject is used for training and the rest for test, which is repeated for each subject separately. In this case, however, the size of training data is insufficient for training deep CNNs. Therefore, we choose a different classification scheme in this paper. Note that our scheme is more challenging than the subject-wise scheme because EEG patterns varying significantly across different subjects need to be modeled within a single classifier.. A bandpass filtering is applied to obtain the signals of ten frequency bands: delta (0-3 Hz), theta (4-7 Hz), low alpha (8-9.5 Hz), high alpha (10.5-12 Hz), alpha (8-12 Hz), low beta (13-16 Hz), mid beta (17-20 Hz), high beta (21-29 Hz), beta (13-29 Hz), and gamma (30-50 Hz). Details of extracted features are explained below.

PSD is commonly employed to describe the activation level of an EEG signal. We compute the PSD of each frequency band from the EEG signal for each electrode by using the Welch’s method. Total 320 PSD features (32 channels

In order to use the PSD values as the input for CNNs, they are transformed to a 32×

32 topography based on the location information of the EEG electrodes. For this, the PSD values are allocated to the electrode locations, and the other scalp regions are filled with interpolated values. The topography is obtained for each frequency band, therefore, the EEG signals of a single segment are represented as a 32

PCC describes the linear relationship between two signals x and y, and is calculated as:

where cov(⋅) indicates the covariance, and σx and σy

PLV [16] represents the phase synchronization between two time series by taking the absolute average of phase differences over temporal windows, which can be written as:

where N is the number of windows, and Δϕn indicates the phase difference for the n-th window. If the two signals are independent, PLV becomes zero. If their phases are perfectly synchronized, PLV becomes one.

PLI [17] is also a measure of phase synchronization, but is considered more robust to the common source problem than PLV, which is typically induced by the volume conductance effect or an active reference of the EEG signals. Signs of the phase differences are used for detecting the asymmetry of phase difference distributions, therefore, a peak near zero is ignored. PLI is defined as follows:

We employ two methods that consider the spatial arrangement of the EEG electrodes because the EEG signals of two physically adjacent electrodes tend to be similar due to the volume conductance effect. The first ordering method starts from the left frontal electrode (Fp1), goes to the closest electrode in the depth axis of the head within the left hemisphere, moves to the right hemisphere after finishing the left hemisphere, then ends at the center line. The second method also starts from the left frontal electrode but goes to the closest electrode without the hemisphere restriction, which results in a spiral form. Figure 1 shows the EEG electrodes with numbers assigned depending on the two ordering methods, which will be referred to as the “dist1” and “dist2” methods in this paper. In addition, we also consider a randomly determined order in order to examine the effect of ordering.

3 filters, and the number of filters is 32 at the first layer and then becomes twice that of the previous convolutional layer. The rectified linear unit is used as the activation function of the convolutional layers. The max-pooling is implemented for 2

2 patches, and the batch normalization is conducted after every max-pooling operation. We also examined more complex CNN structures, but they did not show any improvement of the classification performance.

The CNNs are implemented in Theano. They are trained by the Adam algorithm to minimize the loss in terms of the cross-entropy function. The batch size is set to 256. The training is performed using a Tesla K80 GPU.

Table 1 shows the average accuracy from the five-fold cross-validation for each combination of the feature type, ordering method, and CNN structure.

When the PSD features are used, the maximum accuracy of 80.86% is obtained from CNN-5. When we use a SVM classifier having the radial basis function kernel, we obtain an accuracy of 55.42%. This shows that CNNs can improve the classification performance in comparison to the conventional SVM. However, they show overfitting if their structure is too complex (i.e., CNN-10).

The two ordering methods, dist1 and dist2, show comparable results in most cases, however, the best performance is obtained by dist2. This shows that it is important to place the electrodes from different hemispheres in neighboring columns and rows in the connectivity matrix.

When different connectivity features are compared, PLV shows the best performance except for CNN-10, while PCC is effective for the most complex CNN structure. Between the two phase-related features, PLV shows better performance than PLI overall. PLI employs the sign function for robustness as shown in (3), which seems to remove some information useful for classification.

In order to analyze the feature extraction performance of the proposed model, we examine the filter weights of the first convoluational layer of CNN-5 trained using PLV-dist2 and PSD, which are shown in Figure 3. There are 10 input channels and 32 output channels, which correspond to the numbers of the rows and columns of Figure 3, respectively.

Unlike in Figure 2(b), filters having almost uniform weight values are observed in Figure 2(a). These filters do not contribute much in extracting useful features from input data. Conversely, PLV provides rich information to be learned regarding brain activities.

In our future work, we will examine other types of connectivity features. In addition, methods to effectively integrate different types of features will be also investigated.

This work was supported by Basic Science Research Program through the National Research Foundation of Korea (NRF) funded by the Korea government (MSIT) (NRF-2016R1E1A1A01943283).