This letter proposes a novel message-passing algorithm for signal recovery in compressed sensing. The proposed algorithm solves the disadvantages of approximate message-passing (AMP) and orthogonal/vector AMP, and realizes their advantages. AMP converges only in a limited class of sensing matrices while it has low complexity. Orthogonal/vector AMP requires a high-complexity matrix inversion while it is applicable for a wide class of sensing matrices. The key feature of the proposed algorithm is the so-called Onsager correction via a convolution of messages in all preceding iterations while the conventional message-passing algorithms have correction terms that depend only on messages in the latest iteration. Thus, the proposed algorithm is called convolutional AMP (CAMP). Ill-conditioned sensing matrices are simulated as an example in which the convergence of AMP is not guaranteed. Numerical simulations show that CAMP can improve the convergence property of AMP and achieve high performance comparable to orthogonal/vector AMP in spite of low complexity comparable to AMP. 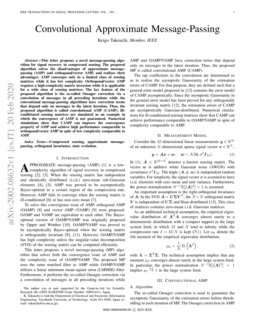 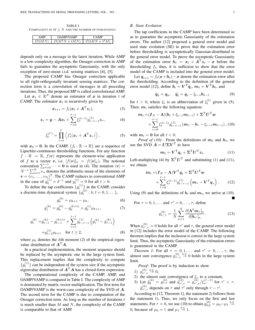 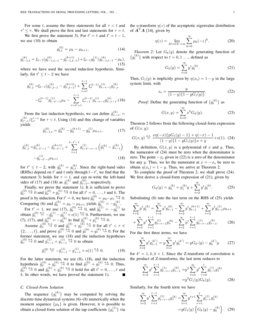 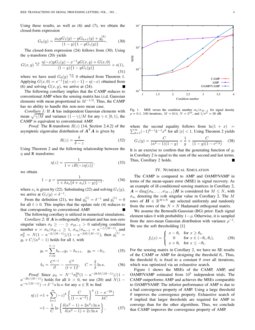 On the Convergence of Orthogonal/Vector AMP: Long-Memory Message-Passing Strategy

This paper proposes a low complexity precoding algorithm based on the re...
Ali Bereyhi, et al. ∙

Approximate message-passing (AMP) [1] is a low-complexity algorithm of signal recovery in compressed sensing [2, 3]. When the sensing matrix has independent and identically distributed (i.i.d.) zero-mean sub-Gaussian elements [4, 5], AMP was proved to be asymptotically Bayes-optimal in a certain region of the compression rate. However, AMP fails to converge when the sensing matrix is ill-conditioned [6] or has non-zero mean [7].

To solve this convergence issue of AMP, orthogonal AMP (OAMP) [8] and vector AMP (VAMP) [9] were proposed. OAMP and VAMP are equivalent to each other. The Bayes-optimal version of OAMP/VAMP was originally proposed by Opper and Winther [10]. OAMP/VAMP was proved to be asymptotically Bayes-optimal when the sensing matrix is orthogonally invariant [9, 11]

. However, OAMP/VAMP has high complexity unless the singular-value decomposition (SVD) of the sensing matrix can be computed efficiently.

This letter proposes a novel message-passing (MP) algorithm that solves both the convergence issue of AMP and the complexity issue of OAMP/VAMP. The proposed MP uses the same matched filter as AMP while OAMP/VAMP utilizes a linear minimum mean-square error (LMMSE) filter. Furthermore, it performs the so-called Onsager correction via a convolution of messages in all preceding iterations while AMP and OAMP/VAMP have correction terms that depend only on messages in the latest iteration. Thus, the proposed MP is called convolutional AMP (CAMP).

The tap coefficients in the convolution are determined so as to realize the asymptotic Gaussianity of the estimation errors of CAMP. For that purpose, they are defined such that a general error model proposed in

[12] contains the error model of CAMP asymptotically. Since the asymptotic Gaussianity in the general error model has been proved for any orthogonally invariant sensing matrix [12]

, the estimation errors of CAMP are asymptotically Gaussian-distributed. Numerical simulations for ill-conditioned sensing matrices show that CAMP can achieve performance comparable to OAMP/VAMP in spite of complexity comparable to AMP.

is independent random variables. For simplicity, the signal vector

is assumed to have i.i.d. elements with zero mean and unit variance. Furthermore, the power normalization

An important assumption is the right-orthogonal invariance of A: In the SVD A=UΣVT, the N×Northogonal matrix V is independent of UΣ and Haar-distributed [13]. This class of matrices contains zero-mean i.i.d. Gaussian matrices.

As an additional technical assumption, the empirical eigenvalue distribution of

ATA converges almost surely to a deterministic distribution with a compact support in the large system limit, in which M and N tend to infinity while the compression rate δ=M/N is kept O(1). Let μk denote the k

The proposed CAMP has Onsager correction applicable to all right-orthogonally invariant sensing matrices. The correction term is a convolution of messages in all preceding iterations. Thus, the proposed MP is called convolutional AMP.

Let xt∈RN denote an estimator of x in iteration t of CAMP. The estimator xt is recursively given by

where μk denotes the kth moment (2) of the empirical eigenvalue distribution of ATA.

In a practical implementation, the moment sequence should be replaced by the asymptotic one in the large system limit. This replacement implies that the complexity to compute {g(1)t} can be independent of the system size if the asymptotic eigenvalue distribution of ATA has a closed-form expression.

Let qt+1=ft(x+ht)−x denote the estimation error after the thresholding. According to the definition of the general error model [12], define bt=VT~qt, mt=VTht, and

for t>0, where ξt is an abbreviation of ξ(t)t given in (5). Then, mt satisfies the following equation:

From the definitions of mt and ht, we use the SVD A=UΣVT to have

When g(0)τ′,τ=0 holds for all τ′ and τ, the general error model in [12] includes the error model of the CAMP. The following theorem implies that the inclusion is correct in the large system limit. Thus, the asymptotic Gaussianity of the estimation errors is guaranteed in the CAMP.

The proof is by induction to show

where we have used the second induction hypothesis. Similarly, for t′≤t−2 we have

From the last induction hypothesis, we can define ~g(k)τ−τ′=g(k)τ′,τ/ξτ−1τ′ for τ<t. Using (14) and this change of variables yields

The sequence {g(k)t} may be computed by solving the discrete-time dynamical systems (6)–(8) numerically when the moment sequence {μk} is given. However, it is possible to obtain a closed-form solution of the tap coefficients {g(1)t} via the η-transform η(z) of the asymptotic eigenvalue distribution of ATA [14], given by

Let Gk(y) denote the generating function of {g(k)t} with respect to t=0,1…, defined as

Then, G1(y) is implicitly given by η(xs)=1−y in the large system limit, with

Define the generating function of {g(k)t} as

Theorem 2 follows from the following closed-form expression of G(x,y):

To complete the proof of Theorem 2, we shall prove (24). We first derive a closed-form expression of (21), given by

. Since the Z-transform of convolution is the product of Z-transforms, the last term reduces to

Similarly, for the fourth term we have

Using these results, as well as (6) and (7), we obtain the closed-form expression

The following corollary implies that the CAMP reduces to conventional AMP when the sensing matrix has i.i.d. Gaussian elements with mean proportional to M−1/2. Thus, the CAMP has no ability to handle this non-zero mean case.

If A has independent Gaussian elements with mean √γ/M and variance (1−γ)/M for any γ∈[0,1), the CAMP is equivalent to conventional AMP.

The R-transform R(z) [14, Section 2.4.2] of the asymptotic eigenvalue distribution of ATA is given by

Using Theorem 2 and the following relationship between the η and R transforms:

The following corollary is utilized in numerical simulations.

It is an exercise to confirm that the generating function of gt in Corollary 2 is equal to the sum of the second and last terms. Thus, Corollary 2 holds.

The CAMP is compared to AMP and OAMP/VAMP in terms of the mean-square error (MSE) in signal recovery. As an example of ill-conditioned sensing matrices in Corollary 2, A=diag{σ0,…,σM−1}H is considered for M≤N, with σm denoting the mth singular value in Corollary 2. The M rows of H∈RM×N are selected uniformly and randomly from the rows of the N×N Hadamard orthogonal matrix.

We assume the Bernoulli-Gaussian (BG) prior: Each signal element takes 0

1−ρ. Otherwise, it is sampled from the zero-mean Gaussian distribution with variance ρ−1. We use the soft thresholding [1]

For the sensing matrix in Corollary 2, we have no SE results of the CAMP or AMP for designing the threshold θt. Thus, the threshold θt is fixed to a constant θ over all iterations, which was optimized via an exhaustive search.