Convexity of mutual information along the Ornstein-Uhlenbeck flow 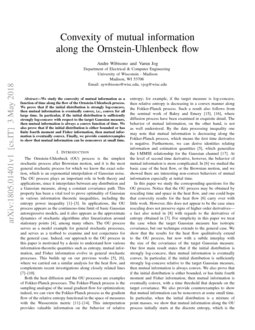 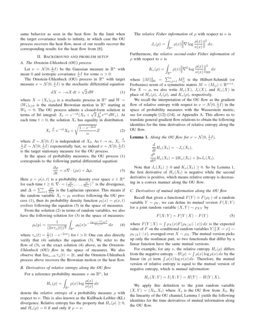 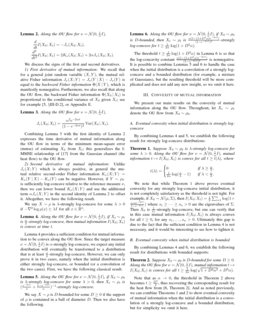 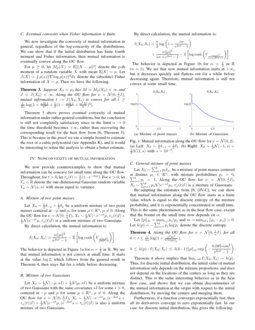 The Ornstein-Uhlenbeck (OU) process is the simplest stochastic process after Brownian motion, and it is the most general stochastic process for which we know the exact solution, which is an exponential interpolation of Gaussian noise. The OU process plays an important role in theory and applications. The OU process provides an interpolation between any distribution and a Gaussian along a constant covariance path. This property has been a vital tool to prove the optimality of Gaussian in various information theoretic inequalities, including the entropy power inequality

In applications, the OU process appears as the continuous-time limit of basic Gaussian autoregressive models. It also appears as the approximate dynamics of stochastic algorithms after linearization around stationary points

[4]. The OU process is a model example for general stochastic processes, and serves as a testbed to examine and test conjectures for the general case. Indeed, our approach to the OU process in this paper is motivated by a desire to understand how various information-theoretic quantities such as entropy, mutual information, and Fisher information evolve in general stochastic processes. This builds up on our previous works [5, 6], where we carried out a similar analysis for the heat flow, and complements recent investigations along closely related lines [7, 8, 9, 10].

The behavior of mutual information, on the other hand, is not as well understood. By the data processing inequality one may note that mutual information is decreasing along the Fokker-Planck process, which means the first time derivative is negative. Furthermore, we can derive identities relating information and estimation quantities

[5], which generalize the I-MMSE relationship for the Gaussian channel [17]. At the level of second time derivative, however, the behavior of mutual information is more complicated. In [6] we studied the basic case of the heat flow, or the Brownian motion, and we showed there are interesting non-convex behaviors of mutual information especially at initial time.

In this paper we study the corresponding questions for the OU process. Notice that the OU process may be obtained by rescaling time and space in the heat flow, and one could hope that convexity results for the heat flow [6] carry over with little work. However, this does not appear to be the case since rescaling does not preserve signs of higher order derivatives—a fact also noted in [8] with regards to the derivatives of entropy obtained in [7]. For simplicity in this paper we treat the case when the target Gaussian measure has isotropic covariance, but our technique extends to the general case. We show that the results for the heat flow qualitatively extend to the OU process, but now with a subtle interplay with the size of the covariance of the target Gaussian measure.

Let ν=N(0,1αI) be the Gaussian measure in Rn with mean 0 and isotropic covariance 1αI, for some α>0. The Ornstein-Uhlenbeck (OU) process in Rn with target measure ν=N(0,1αI) is the stochastic differential equation

where X=(Xt)t≥0 is a stochastic process in Rn and W=(Wt)t≥0 is the standard Brownian motion in Rn starting at W0=0. The OU process admits a closed-form solution in terms of Itô integral: Xt=e−αt(X0+√2∫t0eαsdWs). At each time t>0, the solution Xt has equality in distribution

In the space of probability measures, the OU process (

is the Laplacian operator. Concretely, if the random variable

), then its probability density function

ρt(x)=ρ(x,t) evolves following the equation (3) in the space of measures.

From the solution (2) in terms of random variables, we also have the following solution for (3) in the space of measures:

where τα(t)=1α(1−e−2αt) for t>0. One may also directly verify that (4) satisfies the equation (3). We refer to the flow of (3), or the exact solution (4) above, as the Ornstein-Uhlenbeck (OU) flow in the space of measures. Note that τα(t)→2t as α→0, and the Ornstein-Uhlenbeck process above recovers the Brownian motion or the heat flow.

Ii-B Derivatives of relative entropy along the OU flow

For a reference probability measure ν on Rn, let

denote the relative entropy of a probability measure ρ with respect to ν. This is also known as the Kullback-Leibler (KL) divergence. Relative entropy has the property that Hν(ρ)≥0, and Hν(ρ)=0 if and only if ρ=ν.

The relative Fisher information of ρ with respect to ν is

We recall the interpretation of the OU flow as the gradient flow of relative entropy with respect to ν=N(0,1αI) in the space of probability measures with the Wasserstein metric; see for example [13, 14, 12], or Appendix -A. This allows us to translate general gradient flow relations to obtain the following identities for the time derivatives of relative entropy along the OU flow.

Note that Jν(Xt)≥0 and Kν(Xt)≥0. So by Lemma 1, the first derivative of Hν(Xt) is negative while the second derivative is positive, which means relative entropy is decreasing in a convex manner along the OU flow.

Ii-C Derivatives of mutual information along the OU flow

where F(Y|X)=∫ρX(x)F(ρY|X(⋅|x))dx is the expected value of F on the conditional random variables Y|{X=x}∼ρY|X(⋅|x), averaged over X∼ρX. The mutual version picks up only the nonlinear part, so two functionals that differ by a linear function have the same mutual version.

We apply this definition to the joint random variable (X,Y)=(X0,Xt) where Xt is the OU flow from X0. By the linearity of the OU channel, Lemma 1 yields the following identities for the time derivatives of mutual information along the OU flow.

We discuss the signs of the first and second derivatives.

is proportional to the conditional variance of

Combining Lemma 3 with the first identity of Lemma 2 expresses the time derivative of mutual information along the OU flow in terms of the minimum mean-square error (mmse) of estimating X0 from Xt; this generalizes the I-MMSE relationship of [17] from the Gaussian channel (the heat flow) to the OU flow.

Unlike Jν(X;Y) which is always positive, in general the mutual relative second-order Fisher information Kν(X;Y)=Kν(Y|X)−Kν(Y) can be negative. However, if Y∼ρY is sufficiently log-concave compared to the reference measure ν, then we can lower bound Kν(X;Y) and use the additional term αJν(X;Y) in the second identity of Lemma 2 to offset it. Altogether, we have the following result.

Along the OU flow for ν=N(0,1αI), if Xt∼ρt is α2-strongly log-concave, then mutual information I(X0;Xt) is convex at time t.

We say X∼ρ is D-bounded for some D≥0 if the support of ρ is contained in a ball of diameter D. Then we also have the following.

The threshold t≥12αlog(1+D2α) in Lemma 6 is so that the log-concavity constant α(1−(1+D2α)e−2αt)(1−e−2αt)2 is nonnegative. It is possible to combine Lemmas 5 and 6 to handle the case when the initial distribution is a convolution of a strongly log-concave and a bounded distribution (for example, a mixture of Gaussians), but with a more complicated threshold. For simplicity, we omit it here.

We present our main results on the convexity of mutual information along the OU flow. Throughout, let Xt∼ρt denote the OU flow from X0∼ρ0.

By combining Lemmas 4 and 5, we establish the following result for strongly log-concave distributions:

Theorem 1 above proves the eventual convexity of mutual information for any strongly log-concave initial distribution. However, the threshold is not tight. For example, if X0∼N(μ,Σ), then I(X0;Xt)=12∑ni=1log(1+siαe−2αt1−e−2αt) where s1≥⋯≥sn>0

Σ. Then X0 is 1s1-strongly log-concave, but one can verify that in this case mutual information I(X0;Xt) is always convex for all t≥0, for any s1,…,sn>0. Ultimately this gap is due to the fact that the sufficient condition in Lemma 4 is not necessary, and it would be interesting to see how to tighten it.

By combining Lemmas 4 and 6, we establish the following result for distributions with bounded support.

Note that as α→0, the threshold in Theorem 2 above becomes t≥D22, thus recovering the corresponding result for the heat flow from [6, Theorem 2]. As noted previously, we can combine Theorems 1 and 2 to show the eventual convexity of mutual information when the initial distribution is a convolution of a strongly log-concave and a bounded distribution, but for simplicity we omit it here.

For p≥0, let Mp(X)=E[∥X−μ∥p] denote the p-th moment of a random variable X with mean E[X]=μ. Let J(X)=∫ρ(x)∥∇logρ(x)∥2dx denote the (absolute) Fisher information of X∼ρ. Then we have the following.

Theorem 3 above proves the eventual convexity of mutual information under rather general conditions. However, in the limit α→0 the time threshold becomes +∞, rather than recovering the corresponding result for the heat flow from [6, Theorem 3]. This is because in the proof we use a simple bound to estimate the root of a cubic polynomial (see Appendix -K), and it would be interesting to refine the analysis to obtain a better estimate.

We now provide counterexamples to show that mutual information can be concave for small time along the OU flow. Throughout, for t>0, let τα(t)=1α(1−e−2αt). For u>0, let Vu∈R denote the one-dimensional Gaussian random variable Vu∼N(u,u) with mean and variance equal to u.

By direct calculation, the mutual information is:

The behavior is depicted in Figure 0(a) for α=12 in R. We see that mutual information is not convex at small time. It starts at the value log2, which follows from the general result in Theorem 4, then stays flat for a while before decreasing and becoming convex.

By direct calculation, the mutual information is:

The behavior is depicted in Figure 0(b) for α=12 in R (n=1). We see that now mutual information starts at +∞, but it decreases quickly and flattens out for a while before decreasing again. Therefore, mutual information is still not convex at some small time.

Let X0∼∑ki=1piδμi be a mixture of point masses centered at distinct μi∈Rn, with mixture probabilities pi>0, ∑ki=1pi=1. Along the OU flow for ν=N(0,1αI), Xt∼∑ki=1piN(e−αtμi,τα(t)I) is a mixture of Gaussians.

By adapting the estimates from [6, \lx@sectionsignIV-C], we can show that mutual information along the OU flow starts at a finite value which is equal to the discrete entropy of the mixture probability, and it is exponentially concentrated at small time. This is the same phenomenon as in the heat flow case, except that the bound on the small time now depends on α.

Theorem 4 above implies that limt→0I(X0;Xt)=h(p). Thus, for discrete initial distribution, the initial value of mutual information only depends on the mixture proportions, and does not depend on the locations of the centers as long as they are distinct. This is the same interesting behavior as in the heat flow case, and shows that we can obtain discontinuities of the mutual information at the origin with respect to the initial distribution, by moving the centers and merging them.

For simplicity in this paper we have treated only the case when the target Gaussian distribution has isotropic covariance. It is possible to extend our results to handle the case of a general covariance matrix. In this case, extra caution needs to be exercised since matrices in general do not commute. In the simple case when the covariance matrices of the initial and target distributions commute, our results extend naturally and the various thresholds are now controlled by the eigenvalues of the matrices.

As noted in the introduction, our interest in studying this problem is to better understand the general case of the Fokker-Planck process. Indeed, there is an interesting dichotomy in which we understand the intricate properties of the Ornstein-Uhlenbeck process since we have an explicit solution, whereas we know very little about the general Fokker-Planck process. The gradient flow interpretation applies to the general Fokker-Planck process and provides information for the convexity properties of the relative entropy if the target measure is log-concave. However, much is not known, even about mutual information. Hence in this paper we have attempted to settle the case of the Ornstein-Uhlenbeck process. Even in this case some of our results are not tight and can be improved.