Traditionally, industry solutions for building a task-oriented dialog system have relied on helping dialog authors define rule-based dialog managers, represented as dialog flows. While dialog flows are intuitively interpretable and good for simple scenarios, they fall short of performance in terms of the flexibility needed to handle complex dialogs. On the other hand, purely machine-learned models can handle complex dialogs, but they are considered to be black boxes and require large amounts of training data. In this demonstration, we showcase Conversation Learner, a machine teaching tool for building dialog managers. It combines the best of both approaches by enabling dialog authors to create a dialog flow using familiar tools, converting the dialog flow into a parametric model (e.g., neural networks), and allowing dialog authors to improve the dialog manager (i.e., the parametric model) over time by leveraging user-system dialog logs as training data through a machine teaching interface. 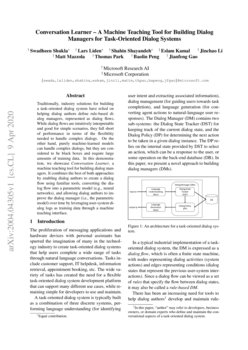 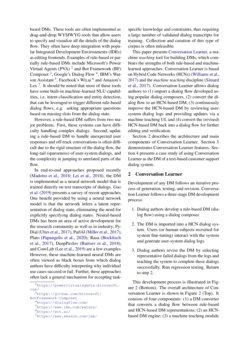 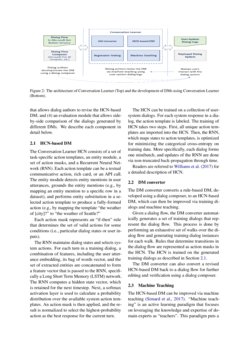 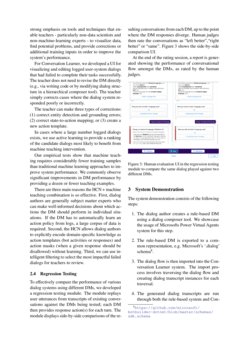 The proliferation of messaging applications and hardware devices with personal assistants has spurred the imagination of many in the technology industry to create task-oriented dialog systems that help users complete a wide range of tasks through natural language conversations. Tasks include customer support, IT helpdesk, information retrieval, appointment booking, etc. The wide variety of tasks has created the need for a flexible task-oriented dialog system development platform that can support many different use cases, while remaining simple for developers to use and maintain.

A task-oriented dialog system is typically built as a combination of three discrete systems, performing language understanding (for identifying user intent and extracting associated information), dialog management (for guiding users towards task completion), and language generation (for converting agent actions to natural-language user responses). The Dialog Manager (DM) contains two sub-systems: the Dialog State Tracker (DST) for keeping track of the current dialog state, and the Dialog Policy (DP) for determining the next action to be taken in a given dialog instance. The DP relies on the internal state provided by DST to select an action, which can be a response to the user, or some operation on the back-end database (DB). In this paper, we present a novel approach to building dialog managers (DMs).

In a typical industrial implementation of a task-oriented dialog system, the DM is expressed as a dialog flow, which is often a finite state machine, with nodes representing dialog activities (system actions) and edges representing conditions (dialog states that represent the previous user-system interactions). Since a dialog flow can be viewed as a set of rules that specify the flow between dialog states, it may also be called a rule-based DM.

There has been an increasing need for tools to help dialog authors111In this paper, “author” may refer to developers, business owners, or domain experts who define and maintain the conversational aspects of a task-oriented dialog system. develop and maintain rule-based DMs. These tools are often implemented as drag-and-drop WYSIWYG tools that allow users to specify and visualize all the details of the dialog flow. They often have deep integration with popular Integrated Development Environments (IDEs) as editing frontends. Examples of rule-based or partially rule-based DMs include Microsoft’s Power Virtual Agents (PVA) 222https://powervirtualagents.microsoft.com/ and Bot Framework (BF) Composer 333https://github.com/microsoft/BotFramework-Composer, Google’s Dialog Flow 444https://dialogflow.com/, IBM’s Watson Assistant 555https://www.ibm.com/watson/, Facebook’s Wit.ai 666https://wit.ai/ and Amazon’s Lex 777https://aws.amazon.com/lex/. It should be noted that most of these tools have some built-in machine-learned NLU capabilities, i.e. intent classification and entity detection, that can be leveraged to trigger different rule-based dialog flows, e.g. asking appropriate questions based on missing slots from the dialog state.

However, a rule-based DM suffers from two major problems. First, these systems can have difficulty handling complex dialogs. Second, updating a rule-based DM to handle unexpected user responses and off-track conversations is often difficult due to the rigid structure of the dialog flow, the long-tail (sparseness) of user-system dialogs, and the complexity in jumping to unrelated parts of the flow.

In end-to-end approaches proposed recently Madotto et al. (2018); Lei et al. (2018), the DM is implemented as a neural network model that is trained directly on text transcripts of dialogs. Gao et al. (2019) presents a survey of recent approaches. One benefit provided by using a neural network model is that the network infers a latent representation of dialog state, eliminating the need for explicitly specifying dialog states. Neural-based DMs has been an area of active development for the research community as well as in industry; PyDial Ultes et al. (2017), ParlAI Miller et al. (2017), Plato Papangelis et al. (2020), Rasa Bocklisch et al. (2017), DeepPavlov Burtsev et al. (2018), and ConvLab Lee et al. (2019) are a few examples. However, these machine-learned neural DMs are often viewed as black boxes from which dialog authors have difficulty interpreting why individual use cases succeed or fail. Further, these approaches often lack a general mechanism for accepting task-specific knowledge and constraints, thus requiring a large number of validated dialog transcripts for training. Collection and curation of this type of corpus is often infeasible.

This development process is illustrated in Figure 2 (Bottom). The overall architecture of Conversation Learner is shown in Figure 2 (Top). It consists of four components: (1) a DM converter that converts a dialog flow between rule-based and HCN-based DM representations; (2) an HCN-based DM engine; (3) a machine teaching module that allows dialog authors to revise the HCN-based DM; and (4) an evaluation module that allows side-by-side comparison of the dialogs generated by different DMs. We describe each component in detail below.

Each action mask represents an “if-then” rule that determines the set of valid actions for some conditions (i.e., particular dialog states or user inputs).

The RNN maintains dialog states and selects system actions. For each turn in a training dialog, a combination of features, including the user utterance embedding, its bag of words vector, and the set of extracted entities are concatenated to form a feature vector that is passed to the RNN, specifically a Long Short Term Memory (LSTM) network. The RNN computes a hidden state vector, which is retained for the next timestep. Next, a softmax activation layer is used to calculate a probability distribution over the available system action templates. An action mask is then applied, and the result is normalized to select the highest-probability action as the best response for the current turn.

The HCN can be trained on a collection of user-system dialogs. For each system response in a dialog, the action template is labeled. The training of HCN takes two steps. First, all unique action templates are imported into the HCN. Then, the RNN, which maps states to action templates, is optimized for minimizing the categorical cross-entropy on training data. More specifically, each dialog forms one minibatch, and updates of the RNN are done via non-truncated back-propagation through time.

Readers are referred to Williams et al. (2017) for a detailed description of HCN.

The DM converter converts a rule-based DM, developed using a dialog composer, to an HCN-based DM, which can then be improved via training dialogs and machine teaching.

The DM converter can also convert a revised HCN-based DM back to a dialog flow for further editing and verification using a dialog composer.

The HCN-based DM can be improved via machine teaching Simard et al. (2017)

. “Machine teaching” is an active learning paradigm that focuses on leveraging the knowledge and expertise of domain experts as “teachers”. This paradigm puts a strong emphasis on tools and techniques that enable teachers - particularly non-data scientists and non-machine-learning experts - to visualize data, find potential problems, and provide corrections or additional training inputs in order to improve the system’s performance.

For Conversation Learner, we developed a UI for visualizing and editing logged user-system dialogs that had failed to complete their tasks successfully. The teacher does not need to revise the DM directly (e.g., via writing code or by modifying dialog structure in a hierarchical composer tool). The teacher simply corrects cases where the dialog system responded poorly or incorrectly.

In cases where a large number logged dialogs exists, we use active learning to provide a ranking of the candidate dialogs most likely to benefit from machine teaching intervention.

There are three main reasons the HCN + machine teaching combination is so effective. First, dialog authors are generally subject matter experts who can make well-informed decisions about which actions the DM should perform in individual situations. If the DM has to automatically learn an action policy from logs, a large corpus of data is required. Second, the HCN allows dialog authors to explicitly encode domain-specific knowledge as action templates (bot activities or responses) and action masks (when a given response should be disallowed) without learning. Third, we can use intelligent filtering to select the most impactful failed dialogs for teachers to review.

To effectively compare the performance of various dialog systems using different DMs, we developed a regression testing module. The module replays user utterances from transcripts of existing conversations against the DMs being tested; each DM then provides response action(s) for each turn. The module displays side-by-side comparisons of the resulting conversations from each DM, up to the point where the DM responses diverge. Human judges then rate the conversations as “left better”,“right better” or “same”. Figure 3 shows the side-by-side comparison UI.

At the end of the rating session, a report is generated showing the performance of conversational flow amongst the DMs, as rated by the human judges.

The system demonstration consists of the following steps:

The customer support system consists of hundreds of “topics” out of which we selected three: “language settings”, “installing or changing fonts”, and “sign in problems”. Table 1 shows an example of a user-system dialog for “change font” topic. Figure 4 shows the representation of a specific topic’s dialog flow in the Microsoft Power Virtual Agents dialog composer. We exported the dialog flow graph of the support system from this system, then followed the process described in Section 2.2 to train our machine-learned HCN-based DM. Figure 5 shows an example of a generated train dialog.

After generating the HCN-based DM, we ran the set of dialog transcripts against both rule-based and HCN-based DMs. We then used human judges to do a blind qualitative evaluation of the conversations and choose the conversation that provided the best task-completion result.

As shown in Table 2, the HCN-based DM provided better results for many transcripts, but there was an almost equal number of dialogs where the rule-based DM was rated better. The rule-based DM may perform better in cases where specialized hard-coded logic was added to handle issues such as input normalization or rewriting.

An example dialog comparison is shown in Figures 6 and 7. As seen in Figure 7, the HCN-based DM handles cases where the user utterance does not match a known phrase better than the rule-based system. The HCN is also able to handle unexpected transitions between dialog nodes.

In a rule-based system, updating the DM to handle unexpected user responses and off-track conversations is much harder due to the rigid structure of the dialog flow graph, the long-tail nature of user-system dialog transcripts (a large number of sparse examples), and complexity in transitioning between unrelated parts of the dialog flow.

Next, we demonstrate that the performance of the HCN DM can be substantially improved by adding just 3 to 5 teaching examples via the machine teaching UI presented in Section 2.3. For this experiment, we chose dialog transcripts that contained three common patterns of conversational problems, and corrected the dialog policy by creating or selecting the appropriate system action to resolve the problem. Once these additional examples are added, as illustrated in Figure 8 the HCN-based DM’s performance improvement over the rule-based DM nearly tripled, from 4.53% to 13.8%.

As shown in Table 3, minimal intervention from a dialog author by providing a small number of corrections to problematic user-system dialog logs can have a significant impact on the performance of the DM. As new users interact with the system and new transcripts are generated, the dialog author can continuously improve the HCN DM’s performance by making corrections and adding new training data.