We study the convergence rate of optimal quantization for a probability measure sequence (μ_n)_n∈N^* on R^d which converges in the Wasserstein distance in two aspects: the first one is the convergence rate of optimal grid x^(n)∈(R^d)^K of μ_n at level K; the other one is the convergence rate of the distortion function valued at x^(n), called the `performance' of x^(n). Moreover, we will study the performance of the optimal grid of the empirical measure of a distribution μ with finite second moment but possibly unbounded support. As an application, we show that the mean performance of the empirical measure of the multidimensional normal distribution N(m, Σ) and of distributions with hyper-exponential tails behave like O(K n/√(n)). 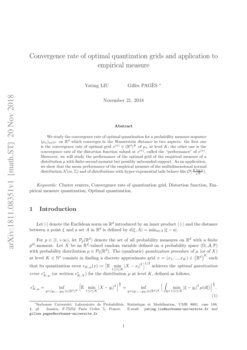 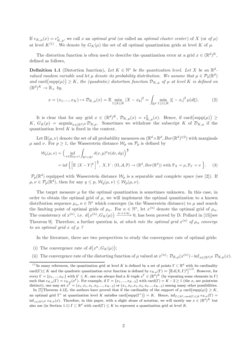 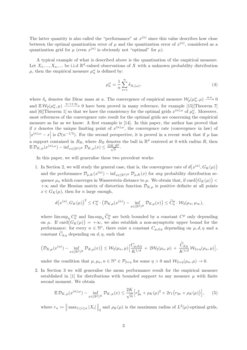 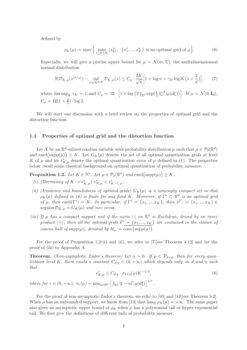 Let |⋅| denote the Euclidean norm on Rd introduced by an inner product ⟨⋅|⋅⟩ and the distance between a point ξ and a set A in Rd is defined by d(ξ,A)=mina∈A|ξ−a|.

For p∈[1,+∞), let Pp(Rd) denote the set of all probability measures on Rd with a finite pth-moment. Let X be an Rd

The distortion function is often used to describe the quantization error at a grid x∈(Rd)K, defined as follows,

Let K∈N∗ be the quantization level. Let X be an Rd-valued random variable and let μ denote its probability distribution. We assume that μ∈P2(Rd) and card(supp(μ))≥K, the (quadratic) distortion function DK,μ of μ at level K is defined on (Rd)K→R+ by,

It is clear that for any grid x∈(Rd)K, DK,μ(x)=e2K,μ(x). Hence, if card(supp(μ))≥K, GK(μ)=argminx∈(Rd)KDK,μ. Sometimes we withdraw the subscript K of DK,μ if the quantization level K is fixed in the context.

Let Π(μ,ν) denote the set of all probability measures on (Rd×Rd,Bor(Rd)⊗2) with marginals μ and ν. For p≥1, the Wasserstein distance Wp on Pp is defined by

In the literature, there are two perspectives to study the convergence rate of optimal grids:

where δa denotes the Dirac mass at a. The convergence of empirical measure Wp(μωn,μ)a.s.−−→0 and EW2(μωn,μ)n→+∞−−−−−→0 have been proved in many reference, for example [15][Theorem 7] and [6][Theorem 1] so that we have the consistency for the optimal grids x(n),ω of μωn. Moreover, most references of the convergence rate result for the optimal grids are concerning the empirical measure as far as we know: A first example is [14]. In this paper, the author has proved that if x denotes the unique limiting point of x(n),ω, the convergence rate (convergence in law) of ∣∣x(n),ω−x∣∣ is O(n−1/2). For the second perspective, it is proved in a recent work that if μ has a support contained in BR, where BR denotes the ball in Rd centered at 0 with radius R, then EDK,μ(x(n),ω)−infx∈(Rd)KDK,μ(x)≤12K⋅R2√n.

In this paper, we will generalise these two precedent works:

We will start our discussion with a brief review on the properties of optimal grid and the distortion function.

1.1 Properties of optimal grid and the distortion function

(Non-asymptotic Zador’s theorem) Let η>0. If μ∈P2+η, then for every quantization level K, there exists a constant Cd,η∈(0,+∞) which depends only on d and η such that

For the proof of non-asymptotic Zador’s theorem, we refer to [10] and [12][see Theorem 5.2]. When μ has an unbounded support, we know from [13] that limKρK(μ)=+∞. The same paper also gives an asymptotic upper bound of ρK when μ has a polynomial tail or hyper-exponential tail. We first give the definitions of different tails of probability measure,

Let μ∈P2(Rd) be absolutely continuous with respect to Lebesgue measure λd on Rd and let f denote its density function.

The purpose of the definition of radial-controlled tail is to control the convergence rate of the density function f(x) to 0 when x converges in every direction to infinity. Remark that the c-th polynomial tail with c>k+1 and the hyper-exponential tail are sufficient conditions to k-th radial-controlled tail. A typical example of hyper-exponential tail is the multidimensional normal distribution N(m,Σ).

Quantization theory has a close connection with Voronoï partitions. Let x=(x1,...,xK) be a grid at level K and let |⋅| be any norm on Rd. The Voronoï cell (or Voronoï region) generated by xi is defined by

We also define the open Voronoï cell generated by xi by

We can also define the quantization error function eK,μ (resp. the distortion function DK,μ) for any order p≥1 as follows,

Let μn,n∈N∗,μ∞∈P2(R) such that W2(μn,μ∞)n→+∞−−−−−→0. For a fixed quantization level K∈N∗, the consistency of optimal grids is firstly established by D. Pollard by using

to represent a quantization “grid” at level K and μK is called “optimal” for a probability mesure μ if W2(μK,μ)=e∗K,μ(μ). We will annonce differently the consistency theorem by letting x(n)=(x(n)1,...,x(n)K)∈(Rd)K to represent the optimal grid of μn (of course we still call the theorem “Pollard’s Theorem”) and we will give the proof of Pollard’s Theorem with this representation to Annex B.

Recall that a probability distribution μ has a k-th radial-controlled tail (Definition 1.3) if μ=f⋅λd and there exists a function g:R+→R+ such that

The proof of Theorem 2.1 relies on the following lemma.

Let μ∈P2(Rd) be absolutely continuous with the respect to Lebesgue measure λd on Rd. If μ has a (d+1)-th radial-controlled tail, then every element of the Hessian matrix HD of the distortion function DK,μ is a continuous function. As a consequence, if the Hessian matrix HD is positive definite at some point x0, then HD is positive definite in the neighbourhood of x0.

The proof of Lemma 2.2 is in Appendix C.

where HD∞ denotes the Hessian matrix of D∞, ζ(n) lies in the geometric segment (x(n),x(∞)), and for a matrix A and a vecteur u, Au⊗2 stands for uTAu.