We give a simple proof that the Frank-Wolfe algorithm obtains a stationary point at a rate of O(1/√(t)) on non-convex objectives with a Lipschitz continuous gradient. Our analysis is affine invariant and is the first, to the best of our knowledge, giving a similar rate to what was already proven for projected gradient methods (though on slightly different measures of stationarity). 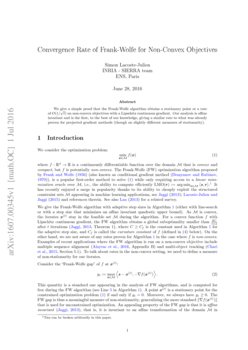 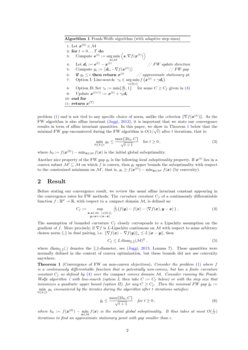 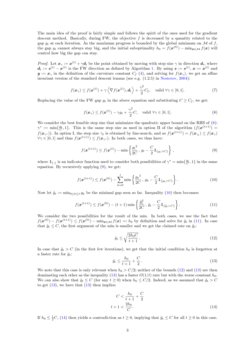 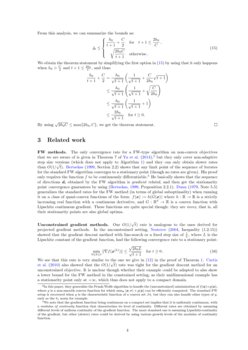 We consider the optimization problem:

where f:Rd→R is a continuously differentiable function over the domain M that is convex and compact, but f is potentially non-convex. The Frank-Wolfe (FW) optimization algorithm proposed by Frank and Wolfe (1956) (also known as conditional gradient method (Demyanov and Rubinov, 1970)), is a popular first-order method to solve (1) while only requiring access to a linear minimization oracle over M, i.e., the ability to compute efficiently .111Ties can be broken arbitrarily in this paper. It has recently enjoyed a surge in popularity thanks to its ability to cheaply exploit the structured constraint sets M

We give the Frank-Wolfe algorithm with adaptive step sizes in Algorithm 1 (either with line-search or with a step size that minimizes an affine invariant quadratic upper bound). As M is convex, the iterates x(t) stay in the feasible set M during the algorithm. For a convex function f with Lipschitz continuous gradient, the FW algorithm obtains a global suboptimality smaller than 2Ct+2 after t iterations (Jaggi, 2013, Theorem 1), where C≥Cf is the constant used in Algorithm 1 for the adaptive step size, and Cf is called the curvature constant of f (defined in (4) below). On the other hand, we are not aware of any rates proven for Algorithm 1 in the case where f is non-convex. Examples of recent applications where the FW algorithm is run on a non-convex objective include multiple sequence alignment (Alayrac et al., 2016, Appendix B) and multi-object tracking (Chari et al., 2015, Section 5.1). To talk about rates in the non-convex setting, we need to define a measure of non-stationarity for our iterates.

Consider the “Frank-Wolfe gap” of f at x(t):

This quantity is a standard one appearing in the analysis of FW algorithms, and is computed for free during the FW algorithm (see Line 5 in Algorithm 1). A point x(t) is a stationary point for the constrained optimization problem (1) if and only if gt=0. Moreover, we always have gt≥0. The FW gap is thus a meaningful measure of non-stationarity, generalizing the more standard ∥∇f(x(t))∥ that is used for unconstrained optimization. An appealing property of the FW gap is that it is affine invariant (Jaggi, 2013), that is, it is invariant to an affine transformation of the domain M in problem (1) and is not tied to any specific choice of norm, unlike the criterion ∥∇f(x(t))∥. As the FW algorithm is also affine invariant (Jaggi, 2013), it is important that we state our convergence results in term of affine invariant quantities. In this paper, we show in Theorem 1 below that the minimal FW gap encountered during the FW algorithm is O(1/√t) after t iterations, that is:

where h0:=f(x(0))−minx∈Mf(x) is the initial global suboptimality.

Another nice property of the FW gap gt is the following local suboptimality property. If x(t) lies in a convex subset M′⊆M on which f is convex, then gt upper bounds the suboptimality with respect to the constrained minimum on M′, that is, gt≥f(x(t))−minx∈M′f(x) (by convexity).

Before stating our convergence result, we review the usual affine invariant constant appearing in the convergence rates for FW methods. The curvature constant Cf of a continuously differentiable function f:Rd→R, with respect to a compact domain M, is defined as:

The assumption of bounded curvature Cf closely corresponds to a Lipschitz assumption on the gradient of f. More precisely, if ∇f is L-Lipschitz continuous on M with respect to some arbitrary chosen norm ∥.∥ in dual pairing, i.e. ∥∇f(x)−∇f(y)∥∗≤L∥x−y∥, then

where diam∥.∥(.) denotes the ∥.∥-diameter, see (Jaggi, 2013, Lemma 7). These quantities were normally defined in the context of convex optimization, but these bounds did not use convexity anywhere.

Consider the problem (1) where f is a continuously differentiable function that is potentially non-convex, but has a finite curvature constant Cf as defined by (4) over the compact convex domain M. Consider running the Frank-Wolfe algorithm 1 with line-search (option I; then take C:=Cf below) or with the step size that minimizes a quadratic upper bound (option II), for any C≥Cf. Then the minimal FW gap ~gt:=min0≤k≤tgk encountered by the iterates during the algorithm after t iterations satisfies:

where h0:=f(x(0))−minx∈Mf(x) is the initial global suboptimality. It thus takes at most O(1ϵ2) iterations to find an approximate stationary point with gap smaller than ϵ.

The main idea of the proof is fairly simple and follows the spirit of the ones used for the gradient descent method. Basically, during FW, the objective f is decreased by a quantity related to the gap gt at each iteration. As the maximum progress is bounded by the global minimum on M of f, the gap gt cannot always stay big, and the initial suboptimality h0=f(x(0))−minx∈Mf(x) will control how big the gap can stay.

Replacing the value of the FW gap gt in the above equation and substituting C≥Cf, we get:

where 1{⋅} is an indicator function used to consider both possibilities of γ∗=min{gtC,1} in the same equation. By recursively applying (9), we get:

Now let ~gt:=min0≤k≤tgk be the minimal gap seen so far. Inequality (10) then becomes:

In case that ~gt>C (in the first few iterations), we get that the initial condition h0 is forgotten at a faster rate for ~gt:

From this analysis, we can summarize the bounds as:

We obtain the theorem statement by simplifying the first option in (15) by using that it only happens when h0>C2 and t+1≤2h0C, and thus:

The only convergence rate for a FW-type algorithm on non-convex objectives that we are aware of is given in Theorem 7 of Yu et al. (2014),222In this paper, they generalize the Frank-Wolfe algorithm to handle the (unconstrained) minimization of f(x)+g(x), where g is a non-smooth convex function for which minx⟨x,r⟩+g(x) can be efficiently computed. The standard FW setup is recovered when g

is the characteristic function of a convex set

M, but they can also handle other types of g, such as the ℓ1 norm for example. but they only cover non-adaptive step size versions (which does not apply to Algorithm 1) and they can only obtain slower rates than O(1/√t). Bertsekas (1999, Section 2.2) shows that any limit point of the sequence of iterates for the standard FW algorithm converges to a stationary point (though no rates are given). His proof only requires the function f to be continuously differentiable.333We note that the gradient function being continuous on a compact set implies that it is uniformly continuous, with a modulus of continuity function that characterizes its level of continuity. Different rates are obtained by assuming different levels of uniform continuity of the gradient function. The more standard one is assuming Lipschitz-continuity of the gradient, but other (slower) rates could be derived by using various growth levels of the modulus of continuity function. He basically shows that the sequence of directions dt obtained by the FW algorithm is gradient related, and then get the stationarity point convergence guarantees by using (Bertsekas, 1999, Proposition 2.2.1). Dunn (1979, Note 5.5) generalizes the standard rates for the FW method (in terms of global suboptimality) when running it on a class of quasi-convex functions of the form: f(x):=h(G(x)) where h:R→R is a strictly increasing real function with a continuous derivative, and G:Rd→R is a convex function with Lipschitz continuous gradient. These functions are quite special though: they are invex, that is, all their stationarity points are also global optima.

Our O(1/√t) rate is analogous to the ones derived for projected gradient methods. In the unconstrained setting, Nesterov (2004, Inequality (1.2.15)) showed that the gradient descent method with line-search or a fixed step size of 1L, where L is the Lipschitz constant of the gradient function, had the following convergence rate to a stationary point:

We see that this rate is very similar to the one we give in (12) in the proof of Theorem 1. Cartis et al. (2010) also showed that the O(1/√t) rate was tight for the gradient descent method for an unconstrained objective. It is unclear though whether their example could be adapted to also show a lower bound for the FW method in the constrained setting, as their unidimensional example has a stationarity point only at +∞, which thus does not apply to a compact domain.