This paper is concerned with the time-dependent acoustic-elastic interaction problem associated with a bounded elastic body immersed in a homogeneous air or fluid above an unbounded rough surface. The well-posedness and stability of the problem are first established by using the Laplace transform and the energy method. A perfectly matched layer (PML) is then introduced to truncate the interaction problem above a finite layer containing the elastic body, leading to a PML problem in a finite strip domain. We further establish the existence, uniqueness and stability estimate of solutions to the PML problem. Finally, we prove the exponential convergence of the PML problem in terms of the thickness and parameter of the PML layer, based on establishing an error estimate between the DtN operators of the original problem and the PML problem. 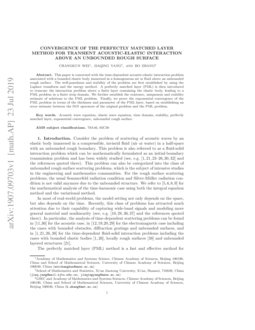 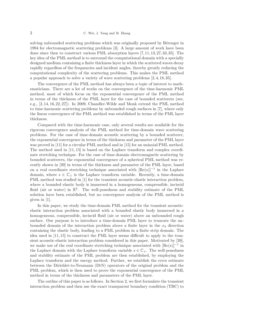 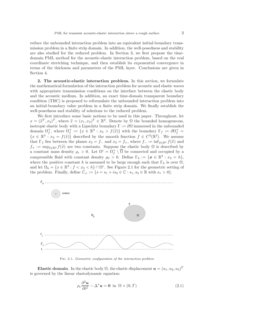 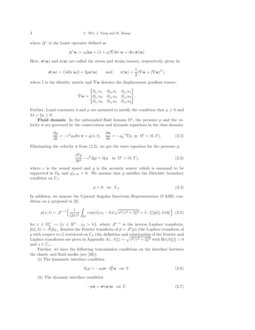 Consider the problem of scattering of acoustic waves by an elastic body immersed in a compressible, inviscid fluid (air or water) in a half-space with an unbounded rough boundary. This problem is also refereed to as a fluid-solid interaction problem which can be mathematically formulated as an initial-boundary transmission problem and has been widely studied (see, e.g. [25, 23, 32, 30, 24, 26, 21, 1] and the references quoted there). This problem can also be categorized into the class of unbounded rough surface scattering problems, which is the subject of intensive studies in the engineering and mathematics communities. For the rough surface scattering problems, the usual Sommerfeld radiation condition and Silver-Müller radiation condition is not valid anymore due to the unbounded structure. We refer to [9, 8, 6, 5] for the mathematical analysis of the time-harmonic case using both the integral equation method and the variational method.

In most of real-world problems, the model setting not only depends on the space, but also depends on the time. Recently, this class of problems has attracted much attention due to their capability of capturing wide-band signals and modeling more general material and nonlinearity (see, e.g. [28, 10, 37, 36] and the references quoted there). In particular, the analysis of time-dependent scattering problems can be found in [11, 36] for the acoustic case, in [12, 29, 19, 20] for the electromagnetic case including the cases with bounded obstacles, diffraction gratings and unbounded surfaces, and in [1, 21, 26, 38] for the time-dependent fluid-solid interaction problems including the cases with bounded elastic bodies [1, 26], locally rough surfaces [38] and unbounded layered structures [21].

In this paper, we study the time-domain PML method for the transient acoustic-elastic interaction problem associated with a bounded elastic body immersed in a homogeneous, compressible, inviscid fluid (air or water) above an unbounded rough surface. Our purpose is to introduce a time-domain PML layer to truncate the unbounded domain of the interaction problem above a finite layer in the x3 direction containing the elastic body, leading to a PML problem in a finite strip domain. The idea used in [11, 15] to construct the PML layer seems difficult to apply to the transient acoustic-elastic interaction problem considered in this paper. Motivated by [39], we make use of the real coordinate stretching technique associated with [Re(s)]−1 in the Laplace domain with the Laplace transform variable s∈C+. The well-posedness and stability estimate of the PML problem are then established, by employing the Laplace transform and the energy method. Further, we establish the error estimate between the Dirichlet-to-Neumann (DtN) operators of the original problem and the PML problem, which is then used to prove the exponential convergence of the PML method in terms of the thickness and parameters of the PML layer.

The outline of this paper is as follows. In Section 2, we first formulate the transient interaction problem and then use the exact transparent boundary condition (TBC) to reduce the unbounded interaction problem into an equivalent initial-boundary transmission problem in a finite strip domain. In addition, the well-posedness and stability are also studied for the reduced problem. In Section 3, we first propose the time-domain PML method for the acoustic-elastic interaction problem, based on the real coordinate stretching technique, and then establish its exponential convergence in terms of the thickness and parameters of the PML layer. Conclusions are given in Section 4.

In this section, we formulate the mathematical formulation of the interaction problem for acoustic and elastic waves with appropriate transmission conditions on the interface between the elastic body and the acoustic medium. In addition, an exact time-domain transparent boundary condition (TBC) is proposed to reformulate the unbounded interaction problem into an initial-boundary value problem in a finite strip domain. We finally establish the well-posedness and stability of solutions to the reduced problem.

We first introduce some basic notions to be used in this paper. Throughout, let x=(˜xT,x3)T, where ˜x=(x1,x2)T∈R2. Denote by Ω the bounded homogeneous, isotropic elastic body with a Lipschitz boundary Γ:=∂Ω immersed in the unbounded domain Ω+f, where Ω+f:={x∈R3:x3>f(˜x)} with the boundary Γf:=∂Ω+f={x∈R3:x3=f(˜x)} described by the smooth function f∈C2(R2). We assume that Γf lies between the planes x3=f− and x3=f+, where f−:=inf˜x∈R2f(˜x) and f+:=sup˜x∈R2f(˜x) are two constants. Suppose the elastic body Ω is described by a constant mass density ρe>0. Let Ωc=Ω+f∖¯¯¯¯Ω be connected and occupied by a compressible fluid with constant density ρ0>0. Define Γh:={x∈R3:x3=h}, where the positive constant h is assumed to be large enough such that Γh is over Ω, and let Ωh={x∈R3:f<x3<h}∩Ωc. See Figure 1 for the geometric setting of the problem. Finally, define C+:={s=s1+is2∈C:s1,s2∈Rwiths1>0}.

Elastic domain. In the elastic body Ω, the elastic displacement u=(u1,u2,u3)T is governed by the linear elastodynamic equation:

where Δ∗ is the Lamé operator defined as

are called the stress and strain tensors, respectively, given by

Further, Lamé constants λ and μ are assumed to satisfy the condition that μ≥0 and 3λ+2μ≥0.

Fluid domain. In the unbounded fluid domain Ωc, the pressure p and the velocity v are governed by the conservation and dynamic equations in the time-domain:

Eliminating the velocity v from (2.2), we get the wave equation for the pressure p:

where c is the sound speed and g is the acoustic source which is assumed to be supported in Ωh and g|t=0=0. We assume that p satisfies the Dirichlet boundary condition on Γf:

In addition, we impose the Upward Angular Spectrum Representation (UASR) condition on p proposed in [6]:

denotes the Fourier transform of

ˇp=L(p) (the Laplace transform of p with respect to t) restricted on Γh (the definition and relationship of the Fourier and Laplace transforms are given in Appendix A), β(ξ)=√s2/c2+|ξ|2 with Re[β(ξ)]>0 and s∈C+.

Further, we have the following transmission conditions on the interface between the elastic and fluid media (see [26]):

(i) The kinematic interface condition

where n is the unit normal on Γ directed into the exterior of the domain Ω.

To be more precise, the acoustic-elastic interaction problem we consider is that a time-dependent acoustic wave propagates in a fluid domain above a rough surface in which a bounded elastic body is immersed. The problem is to determine the scattered pressure in the fluid domain and the displacement field in the elastic domain at any time. The time-dependent scattering problem can be now modelled by combining (2.1) for the elastic displacement field u and (2.3) for the pressure field p together with the transmission conditions (2.6)-(2.7), the Dirichlet boundary conditions (2.4) on Γf as well as the homogeneous initial conditions

which can be formulated mathematically as follows:

To study the well-posedness of the scattering problem (2.9), we reformulate it into a transmission problem in the strip domain Ωh∪Ω by using the transparent boundary condition (TBC) on the plane Γh proposed in [21]:

Then (2.9) can be equivalently reduced to the transmission problem (TP) in Ωh∪Ω:

In the remaining part of this section, we establish the well-posedness and stability of the reduced problem (2.11) by using the Laplace transform. The proof is similar to that used in [21], and so we only present the main results without detailed proofs. To this end, we take the Laplace transform of p(x,t) and u(x,t), respectively, in (2.11) with respect to t and write ˇp(x,s)=L(p)(x,s) ˇu(x,s)=L(u)(x,s). Then (2.11) can be reduced to the problem in s-domain:

For any function ω(˜x,h) defined on Γh, the DtN operator B is defined by

Then the following lemma was proved in [21] (see [21, Lemmas 2.4 and 2.5]), where, for s∈R the space Hs(Γh) denotes the standard Sobolev space on Γh with its norm being defined via the Fourier transform as

where C(σ0) is a constant depending only on c and σ0.

with the Frobenius norm

Hereafter, the expression a≲b or a≳b means a≤Cb or a≥Cb, respectively, for a generic positive constant C which does not depend on any function and important parameters in our model.

where the sesquilinear form a(⋅,⋅) is defined as

with A:B=tr(ABT) denoting the Frobenius inner product of the square matrices A and B.

For each s∈C+, the variational problem (???) has a unique solution (ˇp,ˇu)∈H satisfying that

To prove the well-posedness of the reduced problem (2.11), and establish the convergence of the PML method, we need the following assumptions on the inhomogeneous term g:

Further, we always assume that g can be extended to ∞ with respect to t such that

By using Lemma 2 and a similar argument as in the proof of Theorem 3.2 in [21], the well-posedness and stability of the reduced problem (2.11) can be obtained.

The reduced problem (???) has a unique solution (p,u) such that

In this section, we shall derive the time-domain PML formulation for the acoustic-elastic interaction problem (2.9). The well-posedness and stability of the PML problem can be established based on a similar method as used in the proof of Theorem 3.2 in [21]. Finally, we prove the exponential convergence of the time-domain PML method via constructing a special PML layer in the x3-direction, based on the real coordinate stretching technique.

3.1 The PML problem and its well-posedness

where σ0 is a positive constant, m≥1 is a given integer. In what follows, we will take the real part of the Laplace transform variable s∈C+ to be s1, that is, Re(s)=s1.

We now derive the PML equation by the technique of change of variables, starting with the real stretched coordinate ^x=(^x1,^x2,^x3) with

Taking the Laplace transform of the wave equation (2.3) with respect to t gives

Denote by ˇppml the PML extension of the pressure ˇp satisfying (3.2). Formally, the technique of change of variables requires ˇppml to satisfy

Then, by the chain rule and using the fact that

d^x3/dx3=σ, we obtain the PML equation

Combining the elastic wave equation (2.1) and the interface conditions (2.6)-(2.7), we obtain the truncated PML problem in s-domain:

where the unbounded domain is truncated into the finite strip layer Ωh+L by imposing the homogeneous Dirichlet boundary condition on Γh+L, in view of the exponential decay of the transformed pressure field ˇp.

where the sesquilinear form apml(⋅,⋅) is defined as

which means that apml(⋅,⋅) is uniformly coercive in ˜H.

Arguing similarly as in the proof of Lemma 2 (noting that the TBC in the s-domain is now replaced with the Dirichlet boundary condition), we can obtain the following theorem.

The truncated PML variational problem (3.5) has a unique solution (ˇppml,ˇupml)∈˜H for each s∈C+ with Re(s)=s1>0. Further, we have the following estimates