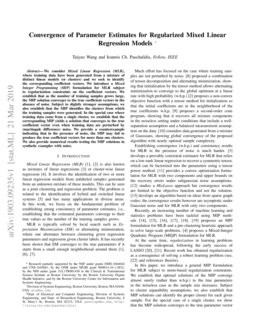 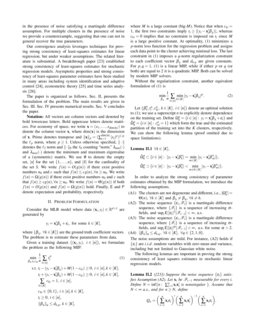 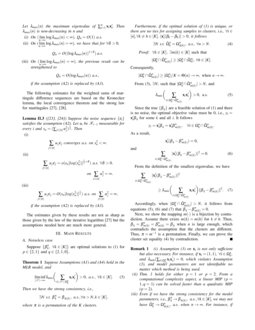 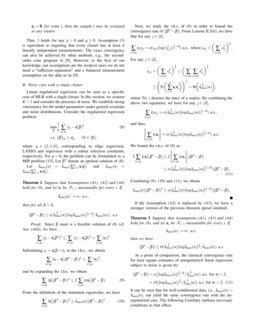 A New Look at an Old Problem: A Universal Learning Approach to Linear Regression

Linear regression is a classical paradigm in statistics. A new look at i...
Koby Bibas, et al. ∙

In many applications we want to find the number of clusters in a dataset...
Behzad Kamgar-Parsi, et al. ∙

Mixed Linear Regression (MLR) [1, 2] is also known as mixtures of linear regressions [3] or cluster-wise linear regression [4]. It involves the identification of two or more linear regression models from unlabeled samples generated from an unknown mixture of these models. This can be seen as a joint clustering and regression problem. The problem is related to the identification of hybrid and switched linear systems [5] and has many applications in diverse areas. In this work, we focus on the fundamental problem of establishing strong consistency of parameter estimates, i.e., establishing that the estimated parameters converge to their true values as the number of the training samples grows.

MLR is typically solved by local search such as Expectation Maximization (EM) or alternating minimization, where one alternates between clustering given regression parameters and regression given cluster labels. It has recently been shown that EM converges to the true parameters if it starts from a small enough neighborhood around them [1, 6, 7].

Much effort has focused on the case where training samples are not perturbed by noise. [8]

[2] proposes a non-convex objective function with a tensor method for initialization so that the initial coefficients are in the neighborhood of the true coefficients w.h.p. [9] proposes a second-order cone program, showing that it recovers all mixture components in the noiseless setting under conditions that include a well-separation assumption and a balanced measurement assumption on the data. [10] considers data generated from a mixture of Gaussians, showing global convergence of the proposed algorithm with nearly optimal sample complexity.

Establishing convergence (w.h.p.) and consistency results for MLR in the presence of noise is much harder. [3] develops a provably consistent estimator for MLR that relies on a low-rank linear regression to recover a symmetric tensor, which can be factorized into the parameters using a tensor power method. [11] provides a convex optimization formulation for MLR with two components and upper bounds on the recovery errors under subgaussian noise assumptions. [12] studies a MixLasso approach but convergence results are limited to the objective function and not the solution. [13] develops an algorithm based on ideas from sparse graph codes; the convergence results however are asymptotic under Gaussian noise and for MLR with only two components.

Recently, an increasing number of machine learning and statistics problems have been tackled using MIP methods

proposes an MIP formulation for MLR and a pre-clustering heuristic approach to solve large-scale problems.

In this paper, we introduce a general MIP formulation for MLR subject to norm-based regularization constraints. We establish that optimal solutions of the MIP converge almost surely (rather than w.h.p.) to the true parameters in the noiseless case as the sample size increases. Subject to cluster separability assumptions, we also establish that MIP solutions can identify the proper cluster for each given sample. For the special case of a single cluster, we show that the MIP solution converges to the true parameter vector in the presence of noise satisfying a martingale difference assumption. For multiple clusters in the presence of noise we provide a counterexample, suggesting that one can not in general recover the true parameters.

The paper is organized as follows. Sec. II, presents the formulation of the problem. The main results are given in Sec. III. Sec. IV presents numerical results. Sec. V concludes the paper.

Notation: All vectors are column vectors and denoted by bold lowercase letters. Bold uppercase letters denote matrices. For economy of space, we write x=(x1,…,xdim(x)) to denote the column vector x, where dim(x) is the dimension of x. Prime denotes transpose and ∥x∥p=(∑dim(x)i=1|xi|p)1/p the ℓp norm, where p≥1. Unless otherwise specified, ∥⋅∥ denotes the ℓ2 norm and ∥⋅∥0 the ℓ0 counting “norm.” λmin(⋅) and λmax(⋅)

denote the minimum and maximum eigenvalue of a (symmetric) matrix. We use

Consider the MLR model where data (xi,yi)∈Rd+1 are generated by

where {βk, ∀k∈[K]} are the ground truth coefficient vectors. The problem is to estimate these parameters from data.

Given a training dataset {(xi,yi), i∈[n]}, we formulate the problem as the following MIP:

where M is a large constant (big-M). Notice that when cki=1, the first two constraints imply ti≥|(yi−x′iβk)|, whereas cki=0 implies that no constraint is imposed on ti since M is a large positive constant. At optimality, (1) minimizes a p

-norm loss function for the regression problem and assigns each data point to the cluster achieving minimal loss. The last constraint in (

1) imposes a q-norm regularization constraint to each coefficient vector βk and dk,q are given constants. For p,q=1, (1) is a linear MIP, while if either p or q (or both) are equal to 2 it is a quadratic MIP. Both can be solved by modern MIP solvers.

Without the regularization constraint, another equivalent formulation of (1) is

Let {βnk,tni,cnki, k∈[K], i∈[n]} denote an optimal solution to (1); we use a superscript n to explicitly denote dependence on the training set. Define Ωnk={i∈[n]: yi=x′iβk+ϵi} and ^Ωnk={i∈[n]: cnki=1} which form the true and the estimated partition of the training set into the K clusters, respectively. We can show the following lemma (proof omitted due to space limitations).

In order to analyze the strong consistency of parameter estimates obtained by the MIP formulation, we introduce the following assumptions.

The noise assumptions are mild. For instance, (A2) holds if {ϵi} are i.i.d.random variables with zero mean and variance, including but not limited to Gaussian white noise.

The following lemmas are important in proving the strong consistency of least squares estimates in stochastic linear regression models.

The following estimates for the weighted sums of martingale difference sequences are based on the Kronecker lemma, the local convergence theorem and the strong law for martingales [27, 28].

The estimates given by these results are not as sharp as those given by the law of the iterative logarithm [27] but the assumptions needed here are much more general.

Suppose Assumptions (A1) and (A4) hold in the MLR model, and

Then we have the strong consistency, i.e.,

where π is a permutation of the K clusters.

Since the true {βk} are a feasible solution of (1) and there is no noise, the optimal objective value must be 0, i.e., yi=x′iβk for some k and all i. It follows

From the definition of the smallest eigenvalue, we have

Next, we show the mapping m(⋅) is a bijection by contradiction. Assume there exists m(k)=m(h) for k≠h. Then, βk=βnm(k)=βnm(h)=βh when n is large enough, which contradicts the assumption that the clusters are different. Thus, π=m−1 is a permutation. Finally, we can prove the cluster set equality (4) by contradiction. ∎

Thm. 1 holds for any p>0 and q≥0. Assumption (3) is equivalent to requiring that every cluster has at least d linearly independent measurements. The exact convergence can also be achieved by other methods, e.g., the second-order cone program in [9]. However, to the best of our knowledge, our assumptions are the weakest since we do not need a “sufficient-separation” and a balanced measurement assumption on the data as in [9].

, corresponding to ridge regression, LASSO and regression with a subset selection constraint, respectively. For

Substituting yi=x′iβ+ϵi in the l.h.s., we obtain

and by expanding the l.h.s. we obtain

From the definition of the minimum eigenvalue, we have

where Tr(⋅) denotes the trace of a matrix. By combining the above two equations, we have for any j∈[d],

If the Assumption (A2) is replaced by (A3), we have a stronger version of the previous theorem (proof omitted).

As a point of comparison, the classical convergence rate for least square estimates of unregularized linear regression subject to noise is given by:

It can be seen that for well-conditioned data, i.e., λmax(n)∼λmin(n), our yield the same convergence rate with the unregularized case. The following Corollary outlines necessary conditions to that effect.

From the strong law of large numbers,

We point out that our setting is more general, including ridge regression, LASSO and regression with subset selection. The convergence rate is sharper in terms of the sample size than the rate achieved for LASSO in [21]. In addition, our noise assumptions are more general and weaker than the Gaussian noise used in [21].

Iii-C A counterexample for the noisy case with two clusters

Next, we provide a counterexample indicating that the presence of noise may prevent convergence to the true coefficients when we have more than a single cluster.

Consider the 2-cluster MLR model where the data (xi,yi)∈R2 are generated as follows:

where {ϵi} are i.i.d. random variables with zero mean and positive variance. If δ<σ, the optimal solution of (1) will be different from the ground truth parameters. In particular, the optimal objective function value of (1), is smaller than the objective function value of the ground truth parameters, and depend on δ rather than σ.

Not only (1), but also other methods may fail to recover the ground truth parameters since they are “unidentifiable,” i.e., two sets of parameters can generate the same distribution. This counterexample shows strong consistency may fail to hold under the weakest assumptions used in our earlier analysis.

In this section we provide numerical results on the convergence of parameters estimates in MLR obtained by formulation (1). Computations were performed with GUROBI 8.0 and python 3.6.2 on the Boston University Shared Computing Cluster. The results below coincide with the intuition that if the K clusters are well-separated, the convergence of the estimates becomes almost equivalent to having K separate linear regression models.

Consider a model where the data (xi,yi)∈R3 are generated independently by

The first element of of xi

consists of random samples from the uniform distribution over

are drawn from the standard normal distribution. One-half of the data samples are from Cluster 1. Fig.

1 plots the evolution of ∥βnk−βk∥ as a function of the number of samples n used in solving problem (1), where we used p=1, M=10, and did not include a regularization constraint.

Consider now a model where the data samples (xi,yi)∈R3 are generated independently by

We established the convergence of parameter estimates for regularized mixed linear regression models with multiple components in the noiseless case. Regularized linear regression can be seen as a specific case of MLR with a single cluster. We establish strong consistency and characterize the convergence rate of parameter estimates for such regression models subject to martingale difference noise under very weak assumptions on the data distribution.

To the best of our knowledge, our paper is the first to study strong consistency of parameter estimates for mixed linear regression models under general noise conditions and general feature conditions rather than convergence with high probability. It can be used directly and extended in many areas, including but not limited to system identification and control, econometric theory and time series analysis.