Convergence of Langevin MCMC in KL-divergence

Langevin diffusion is a commonly used tool for sampling from a given distribution. In this work, we establish that when the target density p^* is such that p^* is L smooth and m strongly convex, discrete Langevin diffusion produces a distribution p with KL(p||p^*)≤ϵ in Õ(d/ϵ) steps, where d is the dimension of the sample space. We also study the convergence rate when the strong-convexity assumption is absent. By considering the Langevin diffusion as a gradient flow in the space of probability distributions, we obtain an elegant analysis that applies to the stronger property of convergence in KL-divergence and gives a conceptually simpler proof of the best-known convergence results in weaker metrics. 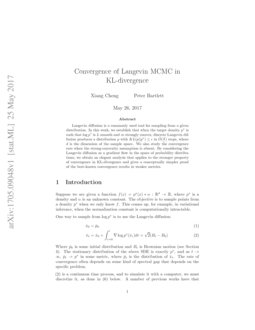 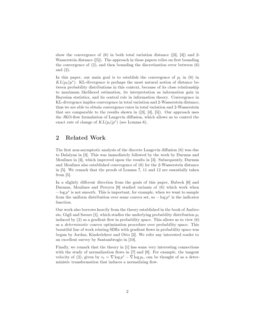 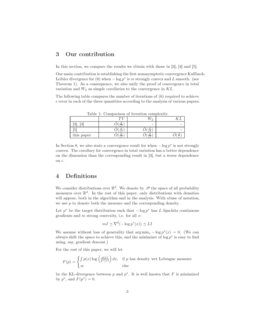 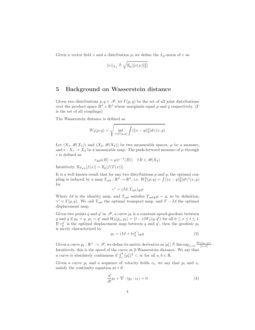 Suppose that we would like to sample from a density

One way to sample from p∗ is to consider the Langevin diffusion:

Where ¯p0 is some initial distribution and Bt is Brownian motion (see Section 4). The stationary distribution of the above SDE is p∗.

The Langevin MCMC algorithm, given in two equivalent forms in (3) and (4), is an algorithm based on discretizing (1).

In this paper, our main goal is to establish the convergence of pt in (4) in KL(pt∥p∗)

. KL-divergence is perhaps the most natural notion of distance between probability distributions in this context, because of its close relationship to maximum likelihood estimation, its interpretation as information gain in Bayesian statistics, and its central role in information theory. Convergence in KL-divergence implies convergence in total variation and 2-Wasserstein distance, thus we are able to obtain convergence rates in total variation and 2-Wasserstein that are comparable to the results shown in (

The first non-asymptotic analysis of the discrete Langevin diffusion (

4) was due to Dalalyan in [3]. This was soon followed by the work by Durmus and Moulines in [4], which improved upon the results in [3]. Subsequently, Durmus and Moulines also established convergence of (4) for the 2-Wasserstein distance in [5]. We remark that the proofs of Lemma 7, 11 and 13 are essentially taken from [5].

In a slightly different direction from the goals of this paper, Bubeck et al [6] and Durmus et al [9] studied variants of (4) which work when −logp∗

is not smooth. This is important, for example, when we want to sample from the uniform distribution over some convex set, so

−logp∗ is the indicator function.

Our work also borrows heavily from the theory established in the book of Ambrosio, Gigli and Savare [1], which studies the underlying probability distribution ¯pt induced by (1) as a gradient flow in probability space. This allows us to view (4) as a deterministic convex optimization procedure over the probability space, with KL-divergence as the objective. This beautiful line of work relating SDEs with gradient flows in probability space was begun by Jordan, Kinderlehrer and Otto [2]. We refer any interested reader to an excellent survey by Santambrogio in [10].

Finally, we remark that the theory in [1] has some very interesting connections with the study of normalization flows in [7] and [8]. For example, the tangent velocity of (2), given by vt=∇logp∗−∇logpt, can be thought of as a deterministic transformation that induces a normalizing flow.

4) when U(x) is m strongly convex and L smooth. (see Theorem 3). As a consequence, we also unify the proof of convergence in total variation and W2 as simple corollaries to the convergence in KL.

The following table compares the number of iterations of (3) required to achieve ϵ error in each of the three quantities according to the analysis of various papers.

In Section 7, we also state a convergence result for when U is not strongly convex. The corollary for convergence in total variation has a better dependence on the dimension than the corresponding result in [3], but a worse dependence on ϵ.

We let Bt be the d-dimensional Brownian motion.

Let p∗ be the target distribution such that U(x)=−logp∗(x)+C has L Lipschitz continuous gradients and m strong convexity, i.e. for all x:

For a given initial distribution ¯p0, the Exact Langevin Diffusion is given by the following stochastic differential equation (recall U(x)−logp∗(x)):

(This is identical to (1), restated here for ease of reference.) For a given initial distribution p0, and for a given stepsize h, the Langevin MCMC Algorithm is given by the following:

For a given initial distribution p0 and stepsize h, the Discretized Langevin Diffusion is given by the following SDE:

For the rest of this paper, we will use pt to exclusively denote the distribution of xt in (4).

We assume without loss of generality that

. (We can always shift the space to achieve this, and the minimizer of U is easy to find using, say, gradient descent.)

For the rest of this paper, we will let

be the KL-divergence between μ and p∗. It is well known that F is minimized by p∗, and F(p∗)=0.

Finally, given a vector field

4.1 Background on Wasserstein distance and curves in P(Rd)

be the set of all joint distributions over the product space

Rd×Rd whose marginals equal μ and ν respectively. (Γ is the set of all couplings)

The Wasserstein distance is defined as

It is a well known result that for any two distributions μ and ν which have density wrt the Lebesgue measure, the optimal coupling is induced by a map Topt:Rd→Rd, i.e. W22(μ,ν)=∫(∥x−y∥22)dγ∗(x,y) for

Given a curve μt:R+→P(Rd), we define its metric derivative as

. Intuitively, this is the speed of the curve in 2-Wasserstein distance. We say that a curve μt is absolutely continuous if ∫ba|μ′t|2<∞ for all a,b∈R.

Given a curve μt:R+→P(Rd) and a sequence of velocity fields vt:R+→(Rd→Rd), we say that μt and vt satisfy the continuity equation at t if

If μt is a constant-speed-geodesic between ν and π, then vπν satisfies (7) at t=0, by the characterization in (5).

This section presents some basic results needed for our main theorem.

In this section, we present some crucial Lemmas which allow us to study the evolution of F(μt) along a curve μt:R+→P(Rd). These results are all immediate consequences of results proven in [1].

. For any curve μt:R+→P(Rd), and for any vt that satisfies the continuity equation for μt (see equation (7)), the following holds:

Based on Lemma 1, we define (for any μ∈P(Rd)) the operator

Let μt be an absolutely continuous curve in P(Rd) with tangent velocity field vt. Let |μ′t| be the metric derivative of μt.

Furthermore, for any absolutely continuous curve μt:R+→P(Rd) with tangent velocity vt, we have

As a Corollary of Lemma 2 and Lemma 3, we have the following result:

Let μt be an absolutely continuous curve with tangent velocity field vt. Then

In this section, we will study the curve pt:R+→P(Rd) defined in (4). Unless otherwise specified, we will assume that p0 is an arbitrary distribution.

For any given t and for all s, we define a stochastic process yts as

From s=t onwards, this is the exact Langevin diffusion with pt as the initial distribution (compare with expression (2)).

Finally, for each t, we define a sequence zts by

zts represents the discretization error of ps through the divergence between qts and ps (formally stated in Lemma 5). Note that ztτ(t)=xtτ(t) because τ(t)≤t.

Our proof strategy is as follows:

In this section, we study the consequence of assuming m strong convexity and L smoothness of U(x).

The above theorem immediately allows us to obtain the convergence rate of pkh in both total variation and 2-Wasserstein distance.

Using the choice of k and h in Theorem 3, we get

The first item follows from Pinsker’s inequality. The second item follows from (12), where we take μ0 to be p∗ and μ1 to be pkh, and noting that Dp∗=0. To achieve δ accuracy in Total Variation or W2, we apply Theorem 3 with ϵ=δ2 and ϵ=mδ2 respectively.

The log term in Theorem 3 is not crucial. One can run (3) a few times, each time aiming to only halve the objective F(pt)−F(p∗) (thus the stepsize starts out large and is also halved each subsequent run). The proof is quite simple and will be omitted.

We now state the Lemmas needed to prove Theorem 3. We first establish a notion of strong convexity of F(μ) with respect to W2 metric.

If logp∗(x) is m strongly convex, then

We call this the m-strong-geodesic-convexity of F wrt the W2 distance.

Next, we use the m strong geodesic convexity of F to upper bound F(μ)−F(p∗) by 12m∥Dμ∥2∗ (for any μ∈P(Rd)). This is analogous to how f(x)−f(x∗)≤12m∥∇f(x)∥22 for standard m-strongly-convex functions in Rd.

Under our assumption that −logp∗(x) is m strongly convex, we have that for all μ∈P(Rd),

Now, recall pt from (4). We use strong convexity to obtain a bound on Ept[∥x∥22] for all t. This will be important for bounding the discretization error in conjunction with Lemma 7

Finally, we put everything together to prove Theorem 3.

In this section, we study the case when logp∗ is not m strongly convex (but still convex and L smooth). Let πh be the stationary distribution of (4) with stepsize h.

. Let h′ be the largest stepsize such that

Let C1, C2 and h′ be defined as in the beginning of this section.

Once again, applying Pinsker’s inequality, we get that the above choice of k and t yields dTV(rk,p∗)≤√ϵ. Without strong convexity, we cannot get a bound on W2 from bounding F(rk)−F(p∗) like we did in corollary 8.

In [3], a proof in the non-strongly-convex case was obtained by running Langevin MCMC on

Even if we ignore C1 and C2, our result is not strictly better than (17) as we have a worse dependence on δ. However, we do have a better dependence on d.

The proof of Theorem 5 is quite similar to that of Theorem 3, so we defer it to the appendix.