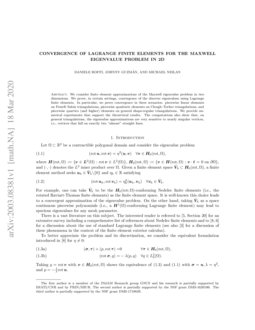 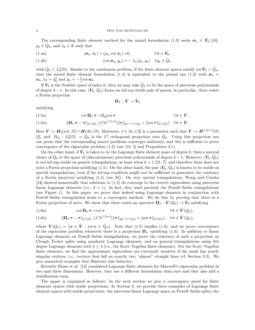 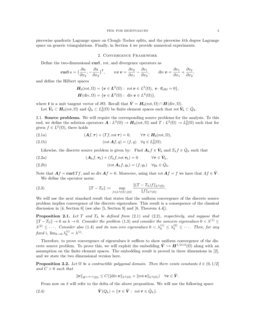 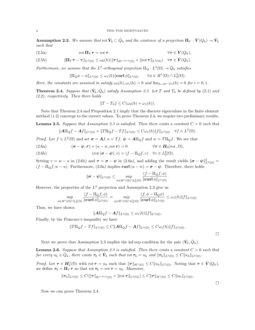 On the Polygonal Faber-Krahn Inequality

It has been conjectured by Pólya and Szegö seventy years ago that the pl...
Beniamin Bogosel, et al. ∙

For example, one can take ˚Vh to be the H0(rot;Ω)-conforming Nedelec finite elements (i.e., the rotated Raviart-Thomas finite elements) as the finite element space. It is well-known this choice leads to a convergent approximation of the eigenvalue problem. On the other hand, taking ˚Vh as a space continuous piecewise polynomials (i.e., a H1(Ω)-conforming Lagrange finite element) may lead to spurious eigenvalues for any mesh parameter.

To better appreciate the problem and its discretization, we consider the equivalent formulation introduced in [8] for η≠0:

The corresponding finite element method for the mixed formulation (1.3) seeks σh∈˚Vh∖{0}, ph∈˚Qh, and λh∈R such that

with ˚Qh⊂L20(Ω). Similar to the continuous problem, if the finite element spaces satisfy rot˚Vh⊂˚Qh, then the mixed finite element formulation (1.4) is equivalent to the primal one (1.2) with σh=uh,λh=η2h and ph=−1λrotuh.

If ˚Vh is the Nedelec space of index k, then we may take ˚Qh to be the space of piecewise polynomials of degree k−1. In this case, (˚Vh,˚Qh) forms an inf-sup stable pair of spaces, in particular, there exists a Fortin projection

On the other hand, if ˚Vh is taken to be the Lagrange finite element space of degree k, then a natural choice of ˚Qh is the space of (discontinuous) piecewise polynomials of degree k−1. However, (˚Vh,˚Qh) is not inf-sup stable on generic triangulations, at least when k=1 [21, 7], and therefore there does not exist a Fortin projection satisfying (1.5). On the other hand, the pair (˚Vh,˚Qh) is known to be stable on special triangulations, even if the inf-sup condition might not be sufficient to guarantee the existence of a Fortin projector satisfying (1.5) (see [6]). On very special triangulations, Wong and Cendes [24] showed numerically that solutions to (1.2) do converge to the correct eigenvalues using piecewise linear Lagrange elements (i.e., k=1). In fact, they used precisely the Powell–Sabin triangulations (see Figure 1). In this paper, we prove that indeed using Lagrange elements in conjunction with Powell–Sabin triangulation leads to a convergent method. We do this by proving that there is a Fortin projection of sorts. We show that there exists an operator ΠV:˚V(Qh)→˚Vh satisfying

where ˚V(Qh)={v∈˚V:rotv∈˚Qh}. Note that (1.5) implies (1.6), and we prove convergence of the eigenvalue problem whenever there is a projection ΠV satisfying (1.6). In addition to linear Lagrange elements on Powell–Sabin triangulations, we prove the existence of such a projection on Clough–Tocher splits using quadratic Lagrange elements, and on general triangulations using kth degree Lagrange elements with k≥4 (i.e., the Scott–Vogelius finite elements). For the Scott–Vogelius finite elements, we find the approximate eigenvalues are extremely sensitive if the mesh has nearly singular vertices, i.e., vertices that fall on exactly two “almost” straight lines (cf. Section 3.3). We give numerical examples that illustrate this behavior.

Recently Duan et al. [12] considered Lagrange finite elements for Maxwell’s eigenvalue problem in two and three dimensions. However, they use a different formulation than ours and they also add a stabilization term.

Define the two-dimensional curl, rot, and divergence operators as

and define the Hilbert spaces

is a unit tangent vector of

We will require the corresponding source problems for the analysis. To this end, we define the solution operators A:L2(Ω)→H0(rot,Ω) and T:L2(Ω)→L20(Ω) such that for given f∈L2(Ω), there holds

Likewise, the discrete source problem is given by:

We define the operator norm:

Therefore, to prove convergence of eigenvalues it suffices to show uniform convergence of the discrete source problem. To prove this, we will exploit the embedding ˚V↪H1/2+δ(Ω) along with an assumption on the finite element spaces. The embedding result is proved in three dimensions in [2], and we state the two dimensional version here.

Let Ω be a contractible polygonal domain. Then there exists constants δ∈(0,1/2] and C>0 such that

From now on δ will refer to the delta of the above proposition. We will use the following space

We assume that rot˚Vh⊂˚Qh and the existence of a projection ΠV:˚V(Qh)→˚Vh such that

Note that Theorem 2.4 and Proposition 2.1 imply that the discrete eigenvalues in the finite element method (1.2) converge to the correct values. To prove Theorem 2.4, we require two preliminary results.

Suppose that Assumption 2.3 is satisfied. Then there exists a constant C>0 such that

However, the properties of the L2 projection and Assumption 2.3 give us

Thus, we have shown

Finally, by the Poincare’s inequality we have

Next we prove that Assumption 2.3 implies the inf-sup condition for the pair (˚Vh,˚Qh).

Suppose that Assumption 2.3 is satisfied. Then there exists a constant C>0 such that for every uh∈˚Qh, there exists τh∈˚Vh such that rotτh=uh and ∥τh∥L2(Ω)≤C∥uh∥L2(Ω).

We first derive an estimate for

If we use Proposition 2.2 we get

Using the inf-sup stability stated in Lemma 2.6, we have

and the Lagrange finite element space is

Analogous vector-valued spaces are denoted in boldface, e.g., \EuScriptPk(Th)=[\EuScriptPk(Th)]2. Finally, the constant C denotes a generic constant that is independent of the mesh parameter h and may take different values at different occurrences.

In the subsequent sections, we will employ a Scott–Zhang type interpolant on the space

There exists an interpolant Ih:˚V→\EuScriptPc1(Th)∩H0(rot,Ω) with the following bound: If T∈Th does not have a corner vertex (i.e., (VIh(T)∪VBh(T))∩VCh=∅), then

In this section, we use the recent results given in [16] to construct a Fortin projection into the Lagrange finite element space defined on Powell–Sabin triangulations. For simplicity and readability, we focus on the lowest-order case; however, the arguments easily extend to arbitrary polynomial degree k≥1.

Given the simplicial triangulation of Th of Ω, we construct its Powell–Sabin refinement Tpsh as follows [20, 19, 16]: First, adjoin the incenter of each T∈Th to each vertex of T. Next, the interior points (incenters) of each adjacent pair of triangles are connected with an edge. For any T that shares an edge with the boundary of Ω, the midpoint of that edge is connected with the incenter of T. Thus, each T∈Th is split into six triangles; cf. Figure 1.

Let SIh(Tpsh) be the points of intersection of the interior edges of Th that adjoin incenters, let SBh(Tpsh) be the intersection points of the boundary edges that adjoin incenters, and set Sh(Tpsh)=SIh(Tpsh)∪SBh(Tpsh). Note that, by the definition of the Powell–Sabin split, the points in Sh(Tpsh) are the singular vertices in Tpsh, i.e, the vertices that lie on exactly two straight lines. In particular, for a vertex z∈SIh(Tpsh) there exists four triangles Tpsh(z)={Ti}4i=1⊂Tpsh such that z is a vertex of Ti. Without loss of generality we assume that these triangles are labeled in a counterclockwise direction. We then define for a scalar function v,

We then define the spaces

We now extend the results of [16] to construct an appropriate Fortin operator that is well defined for τ∈˚V(Qh). To do so, we require some additional notation.

For an interior singular vertex z∈Sh(Tpsh), let T∈Th be a triangle in Th such that z∈∂T, and let {K1,K2}⊂Tpsh be the triangles in Tpsh such that K1,K2⊂T and K1,K2∈Tpsh(z). Let e=∂K1∩∂K2, and let mi be the outward unit normal of Ki perpendicular to e. We then define the jump of a scalar piecewise smooth function at z (restricted to T) as

Next for a triangle T∈Th in the non-refined mesh, we denote by Tct the resulting set of three triangles obtained by connecting the barycenter of T to its vertices, i.e., Tct is the Clough–Tocher refinement of T. We define the set of (local) piecewise polynomials with respect to this partition as

The following lemma provides the degrees of freedom for

˚Vh and ˚Qh that will be used to construct the Fortin operator. The result essentially follows from [16, Lemma 4.5].

A function τ∈˚Vh is uniquely defined by the conditions

Moreover, a function v∈˚Qh is uniquely determined by the values